A game series with no need to introduce itself has decided to go for a child friendly introduction route, have Square Enix successfully opened the door to even more adoring Final Fantasy fans or is this World just a little too alien? Read on to find out!

World of Final Fantasy was originally one of those games I couldn’t of been more on the fence about, the first hour and half really soured the game for me but fortunately I stuck with it. World of Final Fantasy I believe was designed for the younger audience, this is apparent with the character writing and the art style, first off I’m going to address the writing which I feel is the main stickler with this title.

At the start of the game the writing is horrid, the characters are childish, unlikable and just down right annoying, the main culprit being the little ball of hate known as Tama. Tama is your handy guide to the world of Grymoire and has the annoying habit of adding “the” several times during her sentences at the start or end of words. The banter between the main characters Tama, Reynn & Lann is gruellingly bad at worst and grin inducing at it’s best, the Cameo characters are all written as well as you’d expect from a cross over and the main narrative tends to flutter between light and dark with it’s intentions. 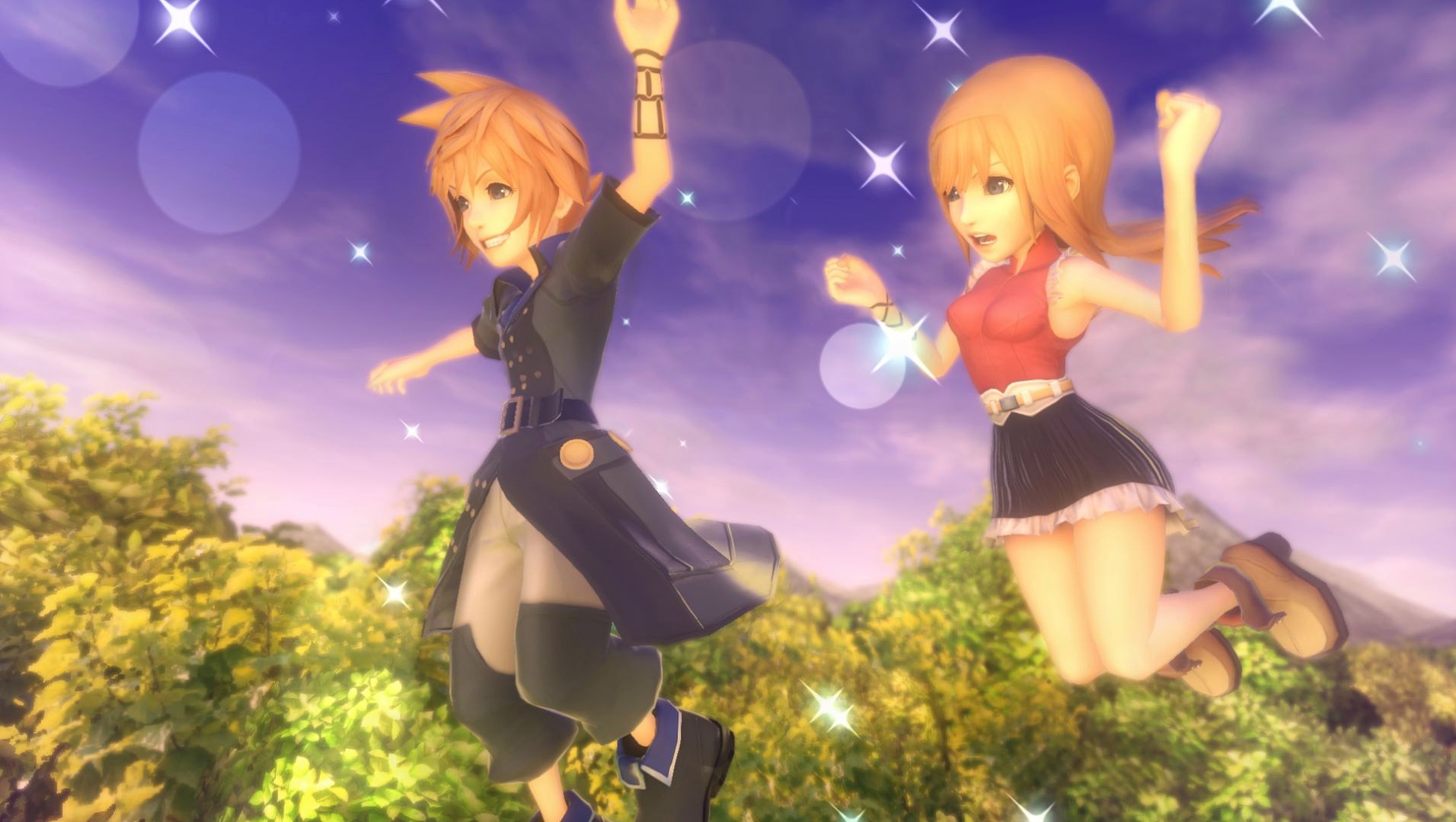 This brings me to my issue with the game in that it doesn’t really work as “Babies first Final Fantasy”, the main narrative tends to either give you too little or too much plot at points and the inclusion of previous Final Fantasy characters would be lost on newcomers especially the more obscure characters like Refia. The narrative picks up around the 8 hour mark but some players will find the child friendly writing a little too sweet for their teeth long before the magic sets in.

The settings in World of Final Fantasy are all picturesque places from any Fantasy tale you can think of, from Jungle to Spooky Docks and even gravity defying waterfalls this game has the lot and trust me they look stunning. The lighting and effects are all top notch on the Playstation 4 and especially within cutscenes it’s almost like playing a Pixar movie, Square Enix really nailed the visual style with this one.

The main characters have 2 forms, Jiant and Lilikins, Jiant is your standard SE art style very much along the lines of Kingdom Hearts, has some fantastic facial animation during cutscenes, Lilikin is the art style which has divided fans and is the Chibi style. Very few characters you meet in Grymoire will be Jiant so you’ll be dealing with the Lilikin characters a lot, this didn’t bother me half as much once I realised it’s less Chibi and more the art style of Final Fantasy 1 to 6 brought to life in HD.

Enemy designs are standard Final Fantasy with mysterious Dark Knights, masks, chains, zippers and more feathers than Chicken Run, to keep it true to it’s roots you also have all the famous Final Fantasy monsters from Moogles to Floating Eyes, all looking very much like they would do within the main series, this game is totally full to the brim of Final Fantasy fan service!

The voice acting in this game is actually really good in both English and Japanese dubs, there are quite a few famous voices you’ll pick out with the English dub (I certainly was happy to hear Jim Cummings) The cross over characters also seem to have the usual Voice Actors attached to them which is a nice nod and others sound as you would expect them too. 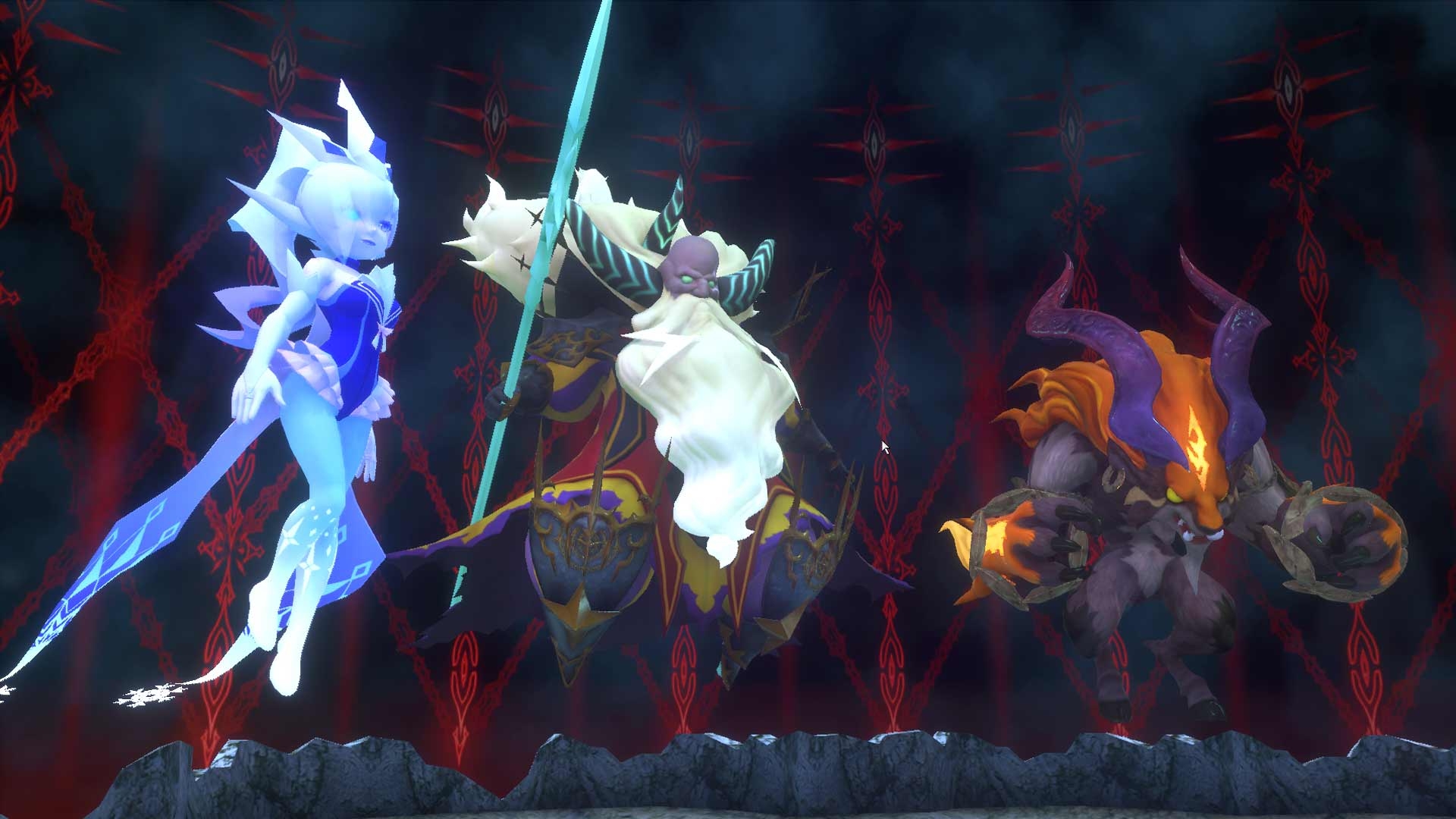 The Soundtrack for the game is amazing as you would expect from Square Enix, there are tonnes of old remixed tracks which will no doubt soak you in nostalgia. The original tracks also suit the game quite well and I actually have to point out I really enjoyed the battle music which I feel stacks up to any battle music produced in the main series.

World Of Final Fantasy plays much like Final Fantasy of old, it’s using the Active Time Battle system which for those who aren’t familiar is basically a time pressured Turn Based system. The combat can be done with the flashy button menu or if you’re an old timer like myself you can go for the bare bones Classic menu which is more like Final Fantasy 1 to X. To spice things up for this game they have thrown in Monster Capturing or as it’s known here Inprism, this means you’ll be pouring hours into capturing your favourite beasts and levelling them up, the latter being done with what looks like a dumbed down Sphere Grid. Much like games such as Dragon Quest Monsters, Pokemon or even SMT you can also give your captures Mirages (that’s what they are called in this game just cos’!) moves it wouldn’t usually learn with gems and even evolve them further so you can have that Behemoth you have always dreamed of!

To really shake things up World Of Final Fantasy doesn’t just have these Mirages join your team, no this time around you’re gonna be stacking them on your head! Stacking is the hook of this game and it’s a little hit and miss, in either form you need a Large, Medium and Small, once stacked it combines all the elements to your characters, strengths, weaknesses and abilities, it takes a little while to get used to and was something that if I’m honest throughout the game I didn’t really dig.

Exploration is your standard fare, you have towns with very little in them apart from the odd side quest. The main hub world is where you can buy items, perform special side events to help unlock summons and you find the meat of the game which is the dungeons. Dungeon designs range from average to poor and rarely rate higher than that, it’s here you can see they focused more on the younger players with how linear they are, how small they can be and how easy the puzzles are to overcome.

The combat speed is painfully slow even if you hold down the R1 button to speed them up and even at full speed the characters seems to run through mud while exploring the field with no particular rush to get anywhere, the difficulty is never too high and only really spikes for optional areas, the game clocks in at around 35 hours maybe a little more if you want to collect every Mirage.

World of Final Fantasy started off as something I really couldn’t stomach, after that initial first hour I started having fun with the game, sitting down to write this review i’m reminded of everything I felt was wrong with the game but I still can’t help but strongly feel that I loved my time with World of Final Fantasy. I found the crossovers fun without being too intrusive, the graphics and cutscenes were stunning and I surprisingly even grew to enjoy most of the characters, but most of all I couldn’t put this adventure down! After playing a good few JRPGs this year including SMT IV:A and Dragon Quest VII very recently I was worried if I could digest this title but it’s charm and unique X Factor that SE seems to have with it’s games shone through this one brightly. If I had to describe this one to someone who’d never heard or seen this game before I’d coin it as “If Disney backed out of Kingdom Hearts” it’s very similar but without the Disney so if that put you off maybe you need to take a little trip to Grymoire.