As the Hyperdimension Neptunia series continues to steam train its way to PC via Steam, the latest release (which launched on the Playstation 4 a few months back in February) has now arrived. Megadimension Neptunia VII marks the first entry for the series on PC that isn’t a port of a PSVita release, so does it make the most of this opportunity? Let’s take a look… 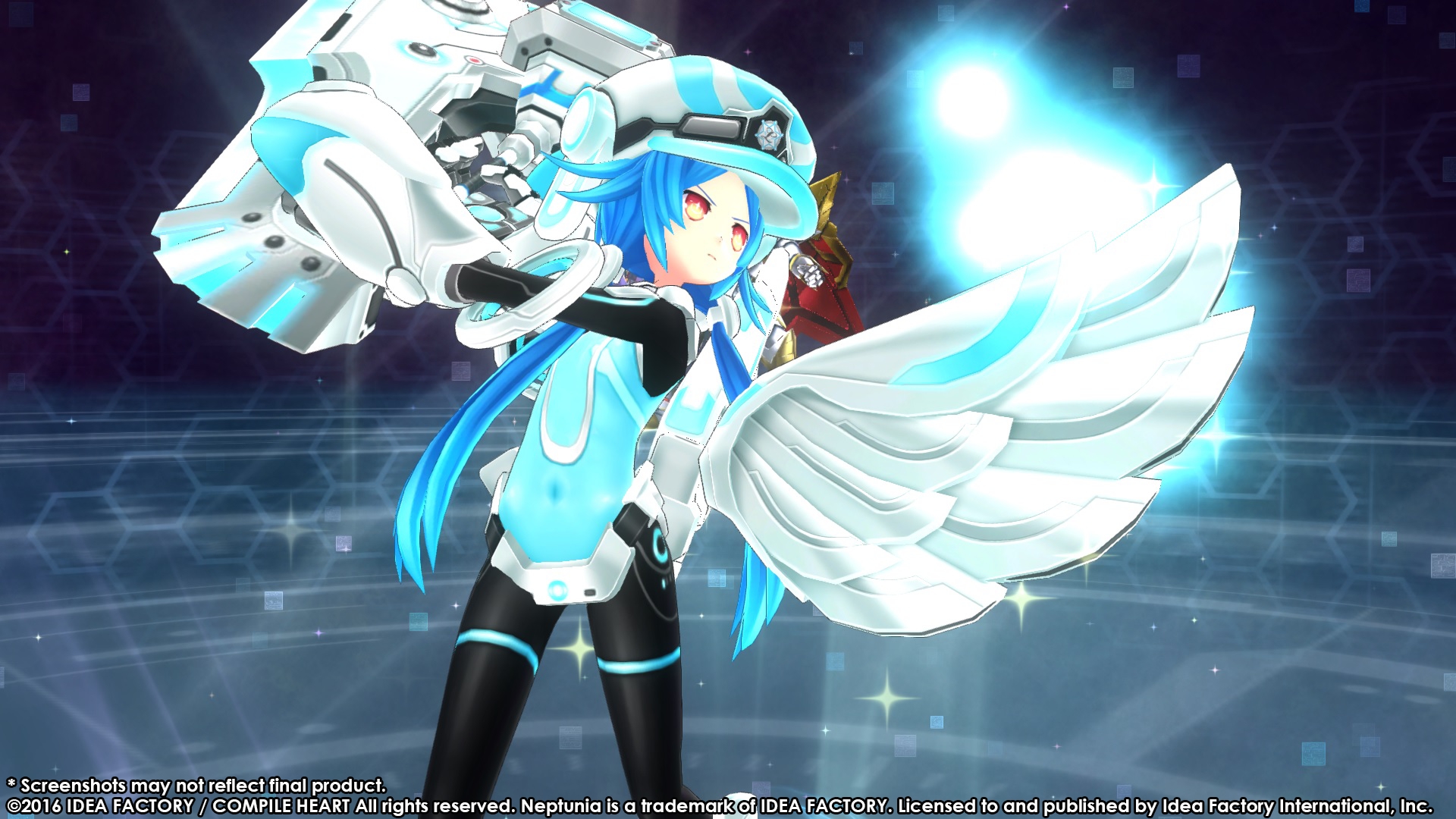 Megadimension Neptunia VII picks up from Victory as Nep-Nep goes on another dimension hopping adventure. The game opens with Neptune finding a retro Dreamcast inspired console and hurriedly heads back to the Basilicom for some quality gaming time. Upon sitting down with Nepgear and firing up the console, a vortex opens dragging them both into the Zero dimension. Curiously, there are three dimension adventures in total on this game. Each is different, they even have their own intros & themes making them feel as though they are self-contained mini RPG’s on the same disk, with their own new characters to meet and worlds to explore.

The goofy & joke filled writing is back and is just as good as hoped, having Neptune back as the protagonist also helps as she has the charisma to carry a story during its lulls. Most of the story is still delivered in the traditional visual novel style, but we now see in-game cut scenes interspersed amongst the dialogue sequences. There’s even full anime styled animated sequences at numerous parts of each story, which whilst a little jarring at times – is good to see from a developer that has a shoe string budget. 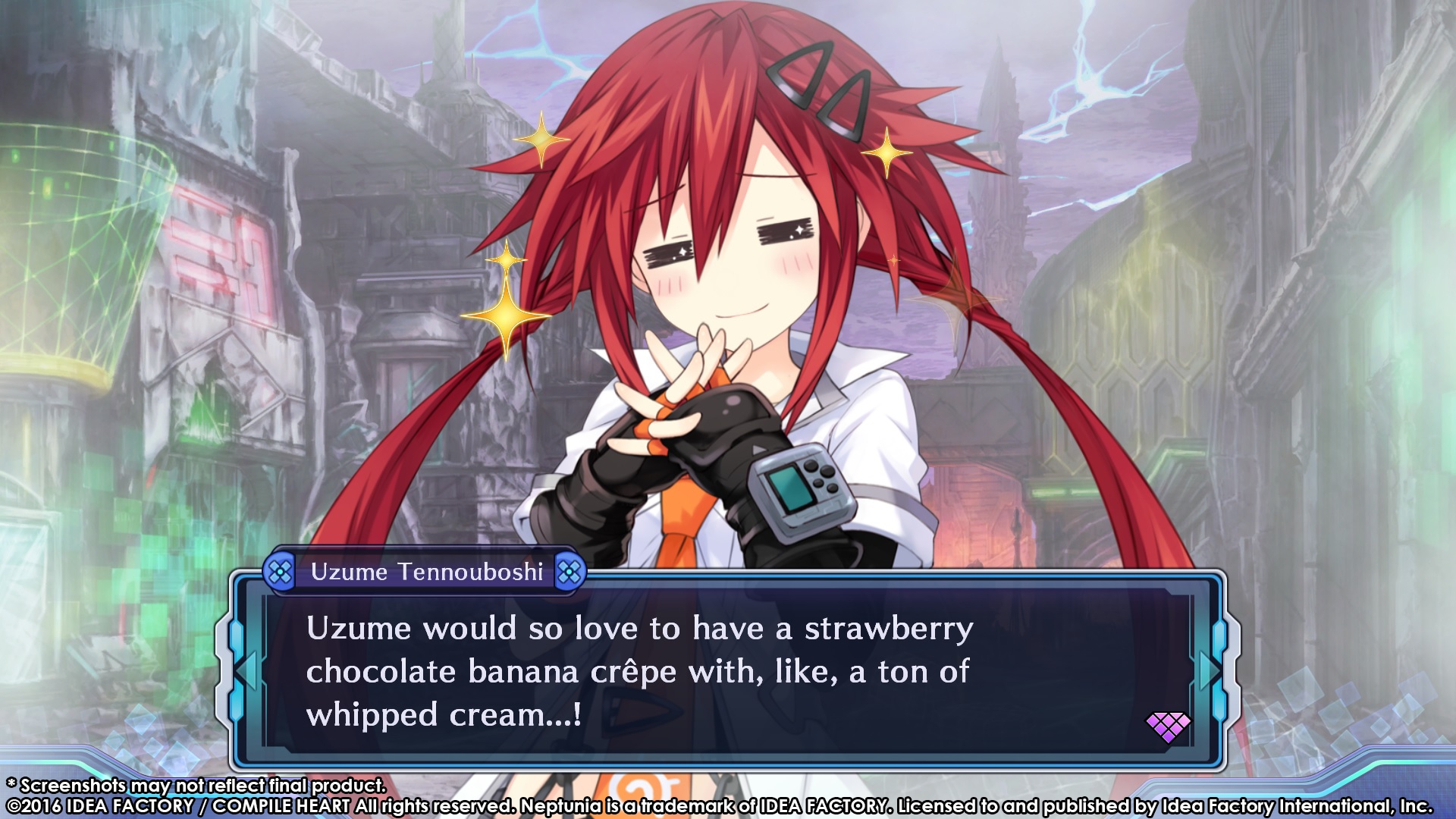 The game does offer up some changes, although there is still a lot of features and content from previous releases. As you would expect, crafting and the like make a return & work just as they did in previous releases. Instead, additions have been done in other areas – such as the map screen which now sees you following a path (similar to the system employed in something like Agarest) and all new giant boss battles that require planning ahead each move to get the most out of. Compile Heart have kept any changes to the formula to a minimum, which will disappoint and please in equal measure no doubt for many with the series’ first ‘next-gen’ foray.

One area not touched at all is the games delivery of cheeky fan-service moments. No doubt the sight of Uzume’s peachy butt & Neptune’s glory (screenshot below) will have some clutching pearls and preparing a patreon/kickstarter funded YouTube series, but its lighthearted delivery is a staple of the series and always comes across as a bit of goofy fun – long may it continue.

The games familiarity with the rest of the series continues with the gameplay. Familiarity can be a double-edged sword though, here in particular. VII plays exactly as you would expect a mainline Neptunia game to play, with plenty of dungeon exploring & turn based battles galore. It’s a simple system for newcomers to grasp, with many other aspects to the combat that give it depth for those seeking an added edge. The likes of formations, support systems (boosted by the lily system), EX drive and customisable combo’s make a return, with some additions. The biggest addition is the combination attacks which allow all party members to attack as one when lined up. The new additions come in handy particularly during those typical Compile Heart difficulty spikes that spring up occasionally to remind you that you didn’t grind enough. A well-timed combination attack could be the difference between scraping past a boss or reloading that save from an hour ago instead.

Plugging in a X360/One controller gets you into the game fastest with the inputs auto mapping, although there have been instances of the triggers not mapping correctly, and offers a bit more comfort for the long haul. If a controller ain’t your thing then Keyboard & Mouse will work fine as well. IFI have a fully customisable key binding menu which should ensure you can have your controls set up as you like. The overly familiar nature of the gameplay mechanics can hurt the game a little though, especially if you’ve recently finished the Rebirth releases on Steam, as the few additions only add an extra tactical layer & don’t switch things up much – if at all. With VII you know exactly what you’re going to get, and how the familiarity will affect your view of the game is dependent in your expectations – but don’t we all just play Neptunia for Nep-Nep’s goofiness anyway? 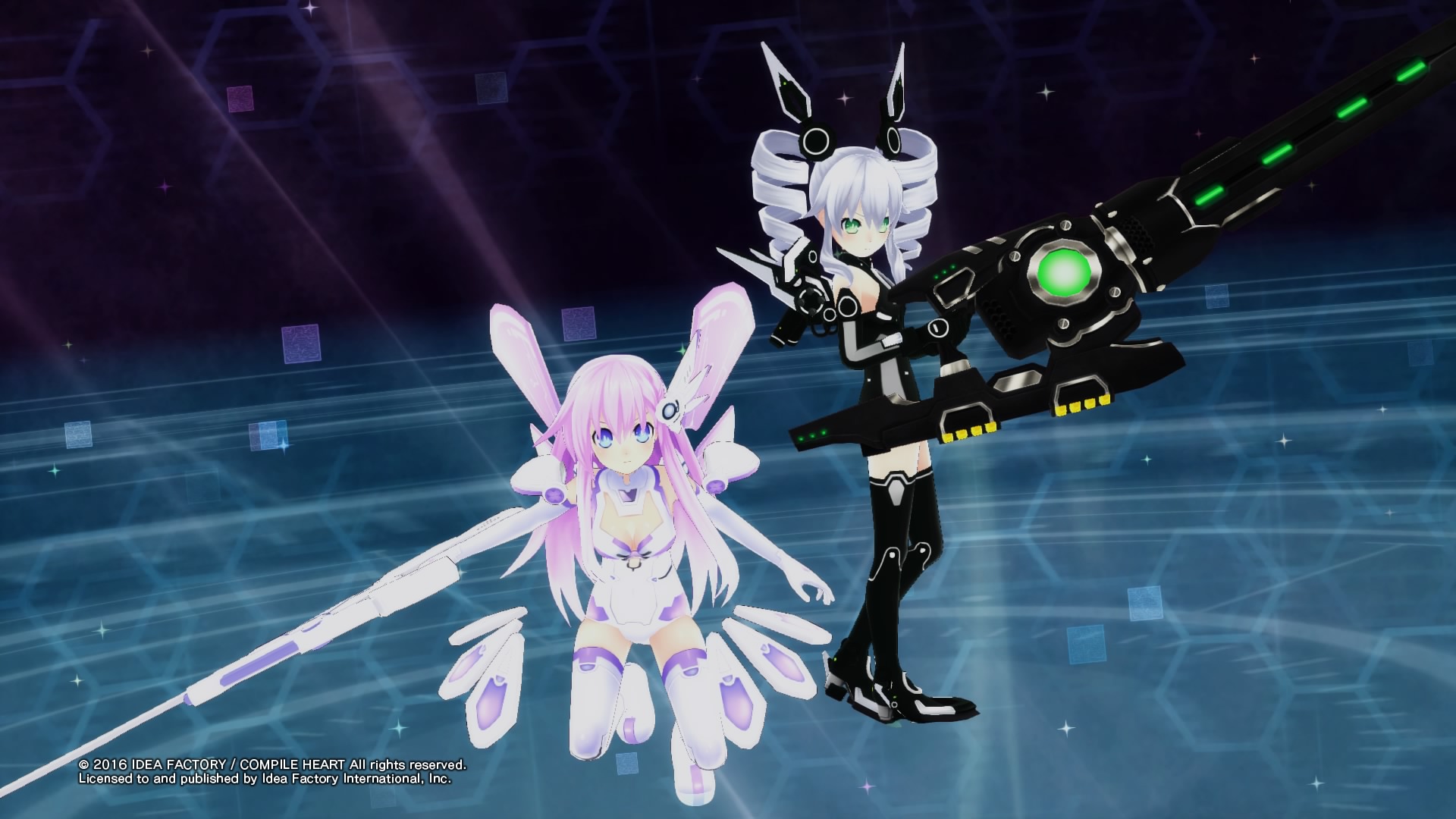 Visually, Neptunia VII is still a bit of a mixed bag PC. There are certainly times when things look much improved over the ReBirth titles, given the port is of a Playstation 4 release, whereas other times it’s hard  to see a difference aside from the resolution bump as some assets are still shared. It looks great at its best with improved texturing & rendering techniques over the previous PSVita ports, with performance also improved over the console original. On my system, Core i5 4690/8GB/GTX960, performance was rock solid with everything cranked up at 1080p.

The main issue with the port for me is the lack of enhancements over the console release though. Aside from the boost in performance, there isn’t much else to speak of. Running the game maxed at 1080p looks & sounds similar to the Ps4 version with slightly more refined AA. It’s a shame the graphical aspect is a little uneven and not enhanced much, but then no one is really expecting Compile Heart to brings us assets at the level of something a AAA studio can do. There’s enough here though to hopefully bring a future release that’s improved and fully loaded for the next mainline entry whenever that may be. 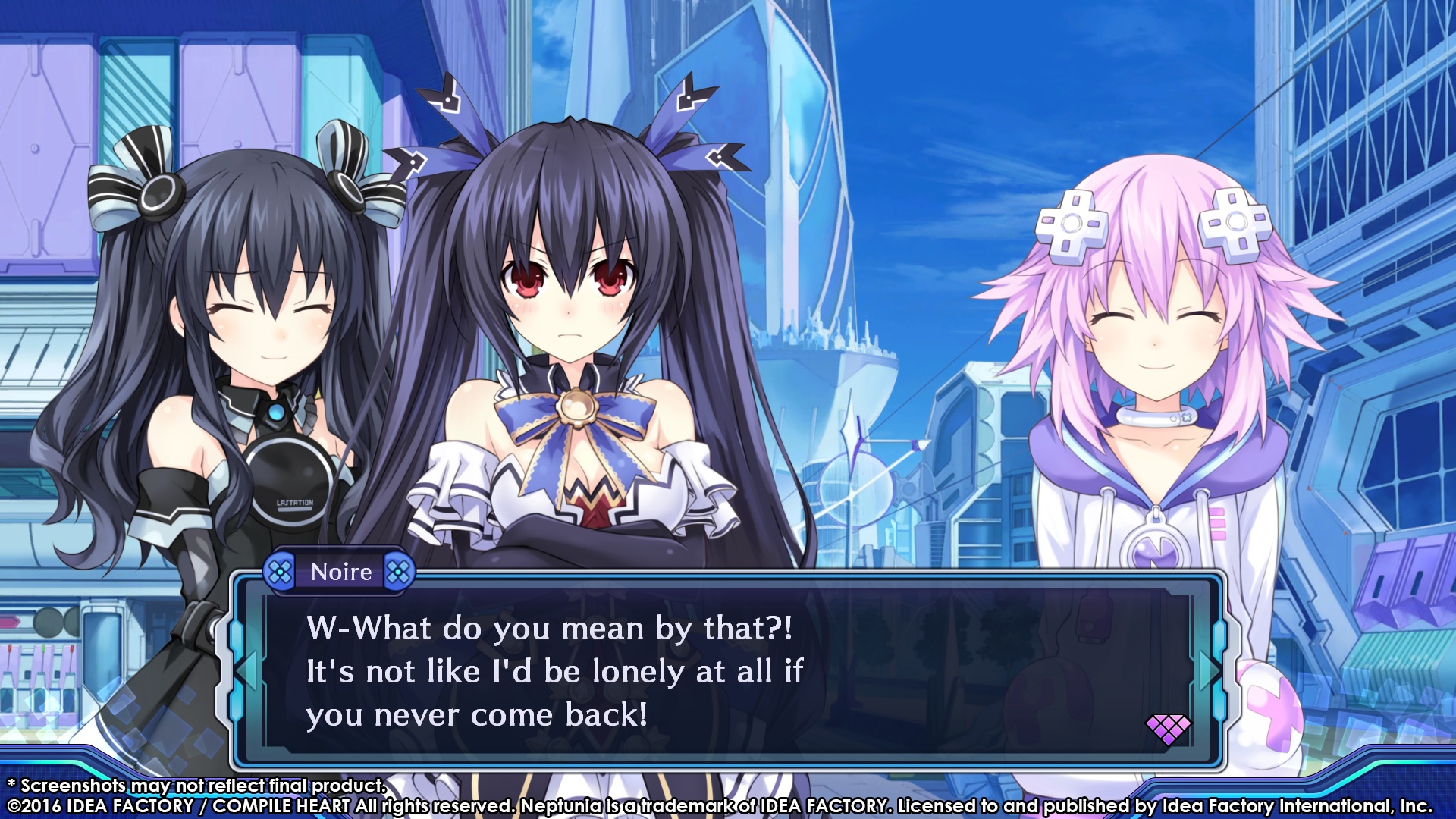 Whilst it’s great that IFI have brought a mainline entry in the Neptunia series over to PC within a few months of the games console release, the lack of meaningful enhancements over the console release also makes it a tough sell if you’re one looking to double dip. There is finally a decent graphics config menu, which guarantees superior performance to Ps4, as well as the port being from the console release meaning it’s a cut above previous ports to PC. If your starting to feel fatigued from the flurry of Neptunia releases on PC though, it may be best to wait a little due to its familiarity, but if you’re not then prepare to enjoy the best entry in the series yet.

As the game is pretty much a barebones PS4 port, some aspects of this review have been brought over from the previous PS4 review and updated accordingly.