Hard Reset Redux brought to you by the team who remade Shadow Warrior and the upcoming Shadow Warrior 2, aims to bring you some hard hitting Sci Fi shooting action in the ye olde style of yesteryear FPS with modern day effects. Is this the revolution that’ll spring us into the next century or is it just B Movie badness?.

If you are familiar with the above title Shadow Warrior you should already have a pretty good idea of where this is going, if not allow me to pique your interest. Hard Reset Redux is a remake of a PC game that released a few years back, harking from the more Doom/Serious Sam/Painkiller school of FPS you’ll find yourself running around maze like levels taking on hordes of enemies with an expansive roster of weapons.

The set up just reeks of 80’s Sci FI cheese, the set up is that the humans have created a programme which will make the A.I surpass humans, A.I find out about this and launch an attack on where it’s kept. You play as James Fletcher, your job is to keep the A.I down, you’ve just gone to the bar to finish your shift when the attack happens and naturally you’re the only one with the skills to take down this robotic menace (no mention of being only a few days to retirement!). The story is played out by the odd voice communication during the level and pre/post level visual comic scenes. Though this are stunning to look and it’s all very cliche, you have your conspiracy and the fact you are unwillingly pulled into it, many conventions of the genre and the fact it doesn’t really traverse any new ground. It may be inspired by writers such as Phillip K Dick but it certainly doesn’t have the impact or legacy of that level. 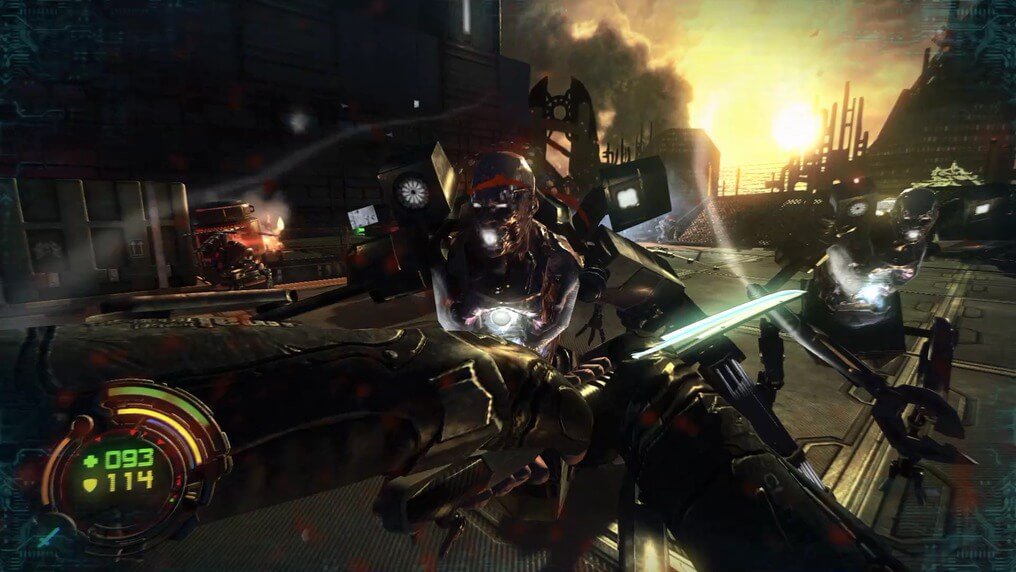 Visually Hard Reset is somewhat of a mixed bag, the effects such as explosions (and there are A LOT) and the electrical surges are outstanding, couple that with the engine and you have so much flying across your stream feeding your eyes with action and intensity. The levels are as you’d expect from something set in a Cyberpunk city, dingy with neon plastered all over, steam all around and most of the time it rains (rain is edgy don’t you know!) , Hard Reset really pays homage to films such as Blade Runner & Total Recall but unfortunately doesn’t have the visual oomph to back it up. Though it follows those conventions outside of the effects it’s really quite last gen running, sloppy textures, samey environments, boring character models and the weapons aren’t that great to look at either, it meets the standards of the genre but by no account outside of it’s BANG BOOM POW does it excel.

The sound design also follows this, the voice acting is passable yet utterly forgetful, the explosions and electricity sound amazingly crisp and you’ll often pass adverts for new products being shelled out in the city, the guns sound painfully horrible though and really aren’t satisfying to the ear. As sadistic as that last sentence sounds think back to say the original Doom, one of the most iconic things about that is the sound of the shotgun, Duke Nukem the sounds of the Pipe Bomb, and Blacks attention to detail in its gun sounds. Hard Reset mixes the ear bleedingly drab electric pulse with flat wet rifle bullets, you get my point. 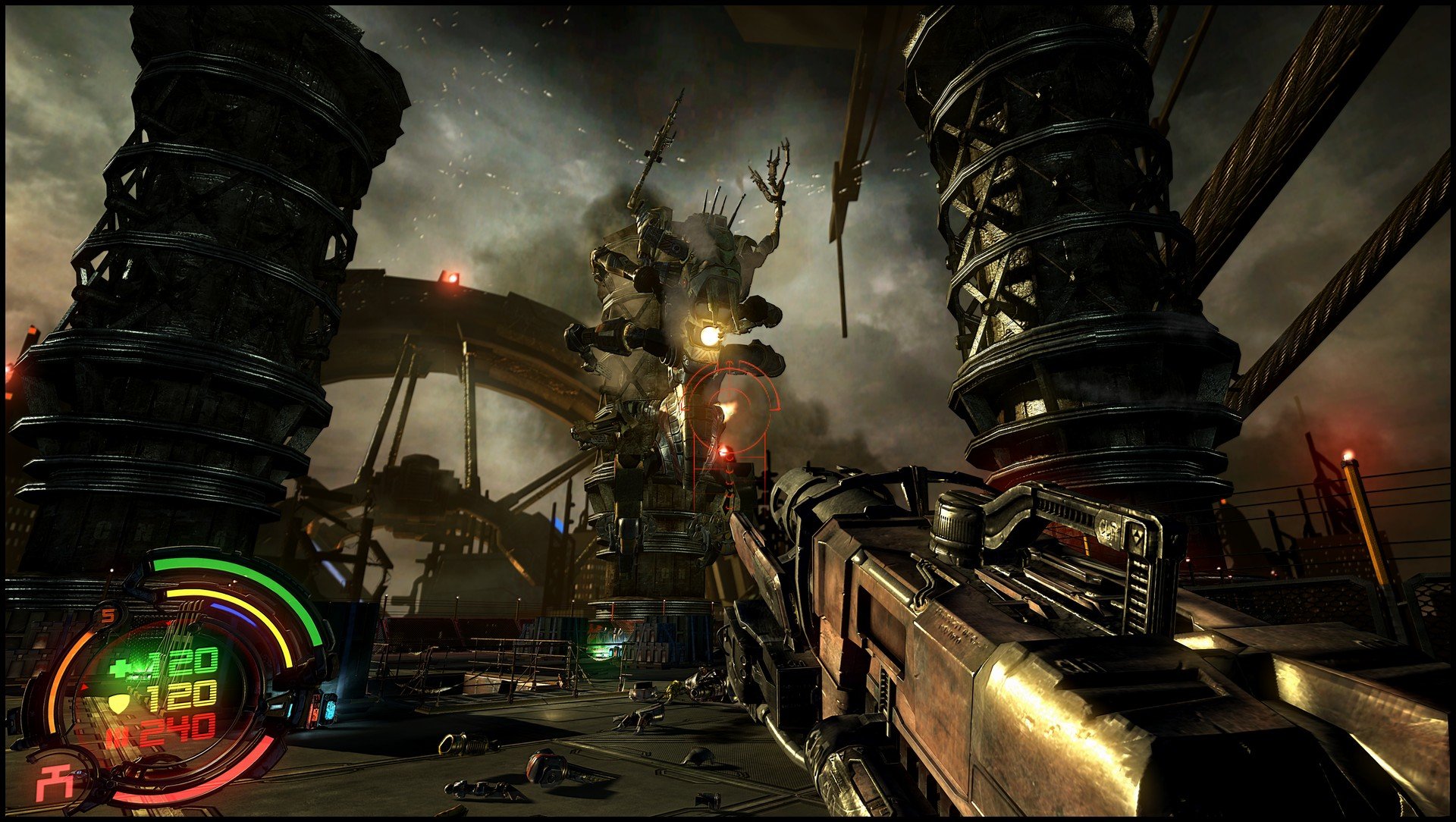 So with all that in mind how does this throwback/forward play? Very well if you’re a fan of the old school shooters!. As mentioned earlier Hard Reset is all about throwing big hordes with you and using your weapons and circle strafing to dispose of them, you do often have to find keys or generators or navigate the odd platforming section but at it’s core this is what the game is about. While this may sound fine to a lot of you, FPS has grown since then and this is very much a product of a different time, I personally am a big fan of this style of FPS, shoot first maybe ask questions later and then hopefully shoot them in the face, it’s all very balls to the walls in that aspect.

The enemies in this are mostly made up of robots, mechs or cyborgs, it suits the setting perfectly but honestly they aren’t the most interesting to kill, they are robotic so naturally they don’t react to much until they explode, this means feedback is limited. Some of the enemies will come after you even if you take one of their arms, it’s harrowing to see a unit you thought you’d killed suddenly bound out of the crowd and lay the smackdown on you. Your main guns consist of an Electric Blaster,transformable gun and a Laser Sword, the blaster seems to put a good portion of the enemies down especially if you upgrade it as you go on via in game collectables, the transformable gun can switch through various modes I.E Shotgun, Grenade Launcher and the like. Naturally the star of the show is the Laser Sword making you feel like a badass cyber punk Jedi as you cut your way through the robotic scum threatening humanity.

As a first person shooter it ticks all the boxes for me, you shoot A LOT of stuff, nearly everything blows up, you have the kickass electrical effects, it’s Cyberpunk Sci Fi goodness and it doesn’t get too hung up on the deep narrative, so what gives?. Unfortunately it’s one of those titles that released at the wrong time, especially on consoles, it’s come out just after the superb Doom which managed to keep to it’s roots and feel modern which causes this title to feel even more outdated than it should. The graphics and sound don’t help matters coupled with the lack of feedback during combat and you’re left feeling a bit let down, the game has no multiplayer but I won’t be docking anything for that as the campaign comes in at a decent 10 or so hours.

As I played this title on the Xbox One I came across a few performance issues which knocked it for me somewhat, mid level loading and auto saves ground the game to a total stop and the frame rate later on took some serious nose dives, the controls took some major tweaking and the weapon selection really could of done with being made a lot smoother than it was, finally it was just leagues behind the PC Footage making the games weaker points really stand out which was a shame.

When it boils down to it I enjoyed Hard Reset Redux as a throw back FPS game to play in short breaks and not put too much thought into, it’s the very definition for me as a “Snack/Filler” game. It doesn’t have enough going for it to fully endorse the game at it’s current price point of £18.99 (price as of 6/22/2016) and even if I was able to look past the faults I think that was because I am very forgiving and nostalgic to this type of FPS. Hopefully once Shadow Warrior 2 arrives the team can come back to the series, boost the budget and really turn this into something along the lines of Doom but as it stands it’s a little too close to titles like Shadow Warrior and Painkiller Hell & Damnation while offering very little bar the explosions and setting as a way to stand out from the crowd.