Welcome to the third edition of PlayStation Now Roulette. After a week off in the highlands I bring to you his week another title that slipped under the radar when it was first released. Eat Them is a monster creation, people eating, city destroying arcade game that was released in 2010 by Sony, with Flufflylogic as the developers. Looking back at that I must admit that it is a lot to take in and how does a game mange to pull it the ft? Surprisingly well to be honest and is is one of those little hidden gems from the PS3 generation. Does not offer a great deal to the table but boy, what a blast Eat Them is! Let’s start this edition of PlayStation Now Roulette! 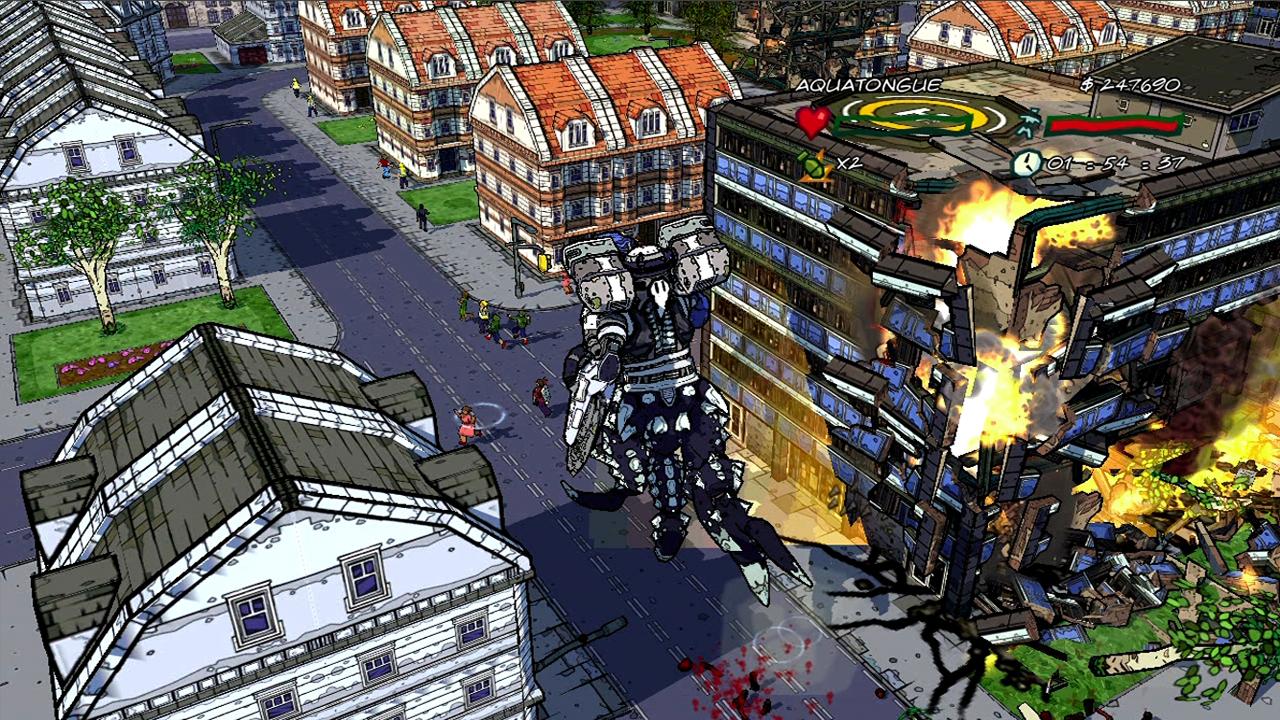 Eat Them is the spiritual successor to Ramage. There has not been many games like Ramage since its original release (other than many remastered and ports) so Eat Them offers a slice of history with a nice modern twist. Set in a 3rd person cell shaded world, Eat Them allows you to control a monster in a mini city that can all be destroyed. It is a lot of fun early on but as you progress through the different levels it starts to become dry in the gameplay department. Each level has its own goal but whether this goal is surviving as long as possible or bearing a set time, the gameplay is always the same. Destroy everything in sight with set restrictions to stop you achieving this sooner. The restrictions? You basic ones really – every action depletes your energy, a posing forces (army, police etc) deplete your energy and the only to counter this is to eat the fleeing people. So as you can see, gameplay is fun in short bursts – after long periods you may start to get a bit bored. Each level is ranked with three medals and each one unlocks a new monster part but other than that there is no real reason to go back as each mini-city is pretty much the same. In between each world (or comic books in this case) is a story level but these are just another goal for you to complete. The first story level involves guiding prisoners out of the city by clearing a path – simple stuff but not too engaging.
You can play through the entire campaign with up to three friends locally but as much fun as it is, some of the goals (mainly the races) can be a little tricky on split screen and end up become just pure chaos (and not in the good way). 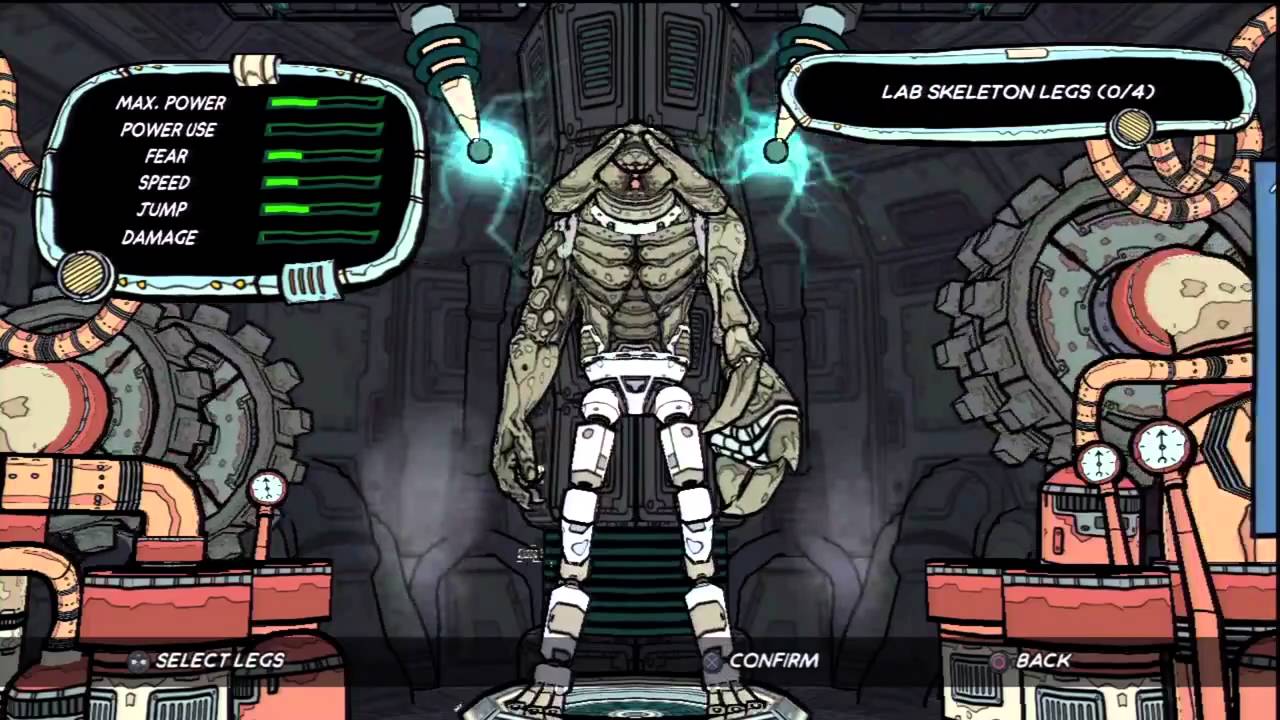 We are in an age of creation with videos games and even in 2010, Eat Them offers a small creation tool for the customisation of your monsters. There are a few prebuilt monsters but the most fun is in the creation of your own.
Each of your monsters can be modified and upgraded with parts you unlock throughout the game. Each part adds a stat (list) to your monster and this can have either an advantage or disadvantage on the level you play next based upon the goal. As mentioned, there is a mix goals so with that in mind you can see equipping the right monster part is key to achieving your goal efficiently. Go into a level with a destruction goal with no damage stat and you will leave with a bronze medal (if you are lucky).

Eat Them offers a very simple control scheme that unfortunately suffers from a sluggish camera.  As simple as it is to move through and destroy the city it is a shame that the camera makes things difficult. Even in a small area finding arrows during a race can be quite tricky as it is hard to work out where that arrow is in relation to where you are standing. Needless to say, the races were my least favourite goal of a level. 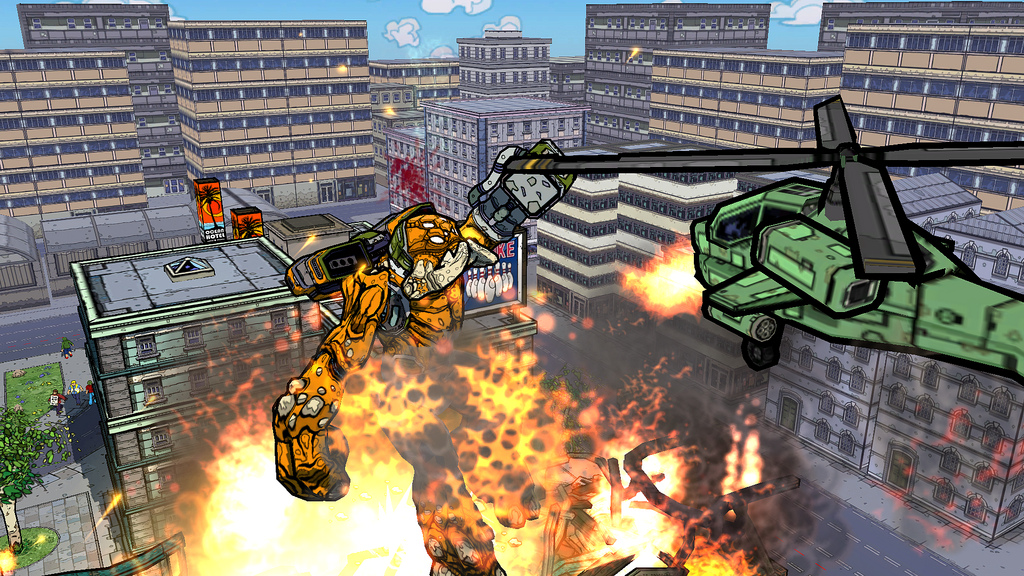 Whilst giving Eat Them the hour treatment I experienced no issues whatsoever. There were no stutters in streamed gameplay with very little lag. The responses between button presses and actions on the screen did feel heavy and a little delayed but I think this may be an issue with the game itself. That aside, it is certainly very playable on the service.

So, Eat Them plays well but is it worth your time on the PlayStation Now service?

Eat Them is a surprisingly enjoyable title to kick back and relax too. As a fan of these style of destruction games I found great joy during my hour with this title. It is one that I may find myself coming back to now and again but not a game that I could invest a lot of time in – I feel it could easily become stale once you have played each different mode a few times over.  On the flip side though, it would be a great party game; three good friends, grab some beers, order the takeaway and you have yourself a very entertaining evening.