The closed beta for DOOM contained only 2 maps & 2 game modes, but that’s enough to get a good feel on how the games multiplayer is shaping up ahead of release in a months time. I was a little wary when first firing up the beta to be honest. In the menu I spotted a Loadouts section and my first couple of games were packed with lag, so I left it a few hours and returned. Luckily my earlier worries were nothing more than that. Loadouts are simply made up of two guns & a grenade. No Perks or abilities to mull over, just a simple & honest ‘pick your WMDs’. There’s also a decent customisation section on offer, colours/patterns/armour etc are unlocked as you level up, with weapon customisation also doable if you want to bling up those guns. Of the two modes on offer, Warpath intrigued. Team deathmatch is just that, with Warpath offering an objective based mode on the beta. It features a point to capture that’s always on the move and follows a set path through the level. The upside to the idea is that it obviously prevents teams from bunkering down in one area and the match grinding out, and the moving objective created a nice dynamic – especially for ambush points. 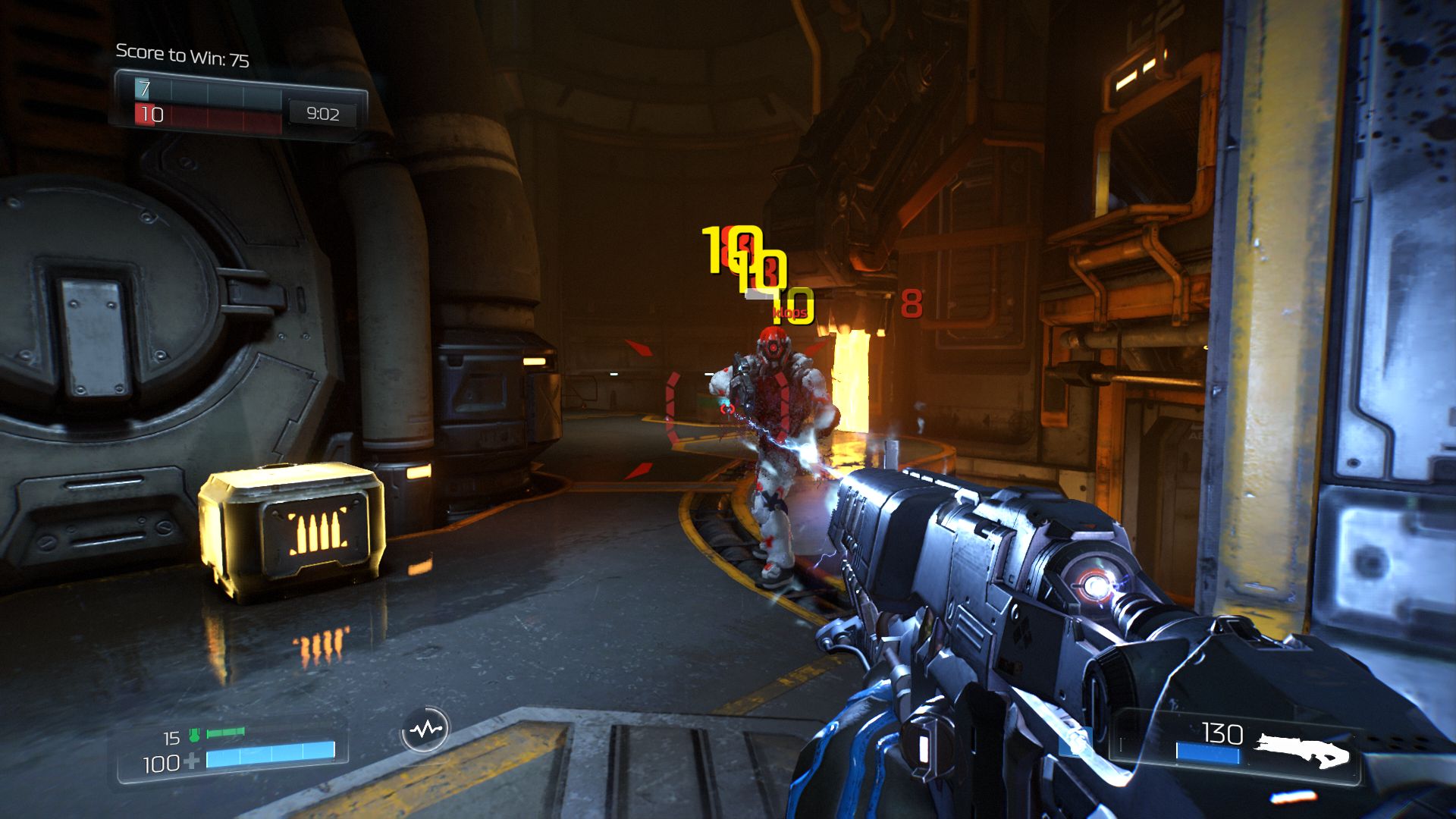 Once you get into a game, there’s a few things to mix things up more. The classic power ups are back, Quad damage being the obvious one most sought after during a game, with some power weapons to seek out too. After each game your also rewarded with some hacks, temporary abilities you can activate upon death. These range from XP kill boosts for 60 seconds to being able to see enemies health for a short time. They’re nothing too game changing, but they can help out when used well or when your stuck in a rut. The real game changer is the Revenant pickup, which transforms you into a jetpack wielding rocket launcher toting slayer of all things not demonic. A few rumblings in the voice chat put forward the notion that it’s OP, but it didn’t seem that way. Go up against it alone & you have no chance, but get a couple of allies to take it on with you and its over for the Revenant. Hell, I’ve been in games of Warpath that the enemies have had the Revenant all game and they’ve still lost. There’s always the upside too of picking up the power up from your defeated foe and getting some revenge. So far it seems nicely balanced with possibly one or two minor weapon tweaks if one was to nitpick.

So how does it play? Glorious. That’s how it played to me, but then I grew up with this stuff – playing the Unreal & Quake games on a Pentium 3 powered 56k modem ridden beast back in the day. It harkens back to the glory days of the deathmatch shooter without a doubt, with little to worry about aside from whether you have enough ammo to finish off that pesky foe or if you will make it to that heavenly health pack in time. Health & Ammo are always sought after, your health doesn’t regenerate, which keeps you on the move at all times. You can try tactics such as camping, but it rarely works. DOOM is all about dealing as much damage before your health or ammo hits zero, which can make for some enthralling matches. There’s just something with the simplicity of deathmatch shooters that makes them fun & dynamic without having to layer on depth, as odd as that notion sounds. 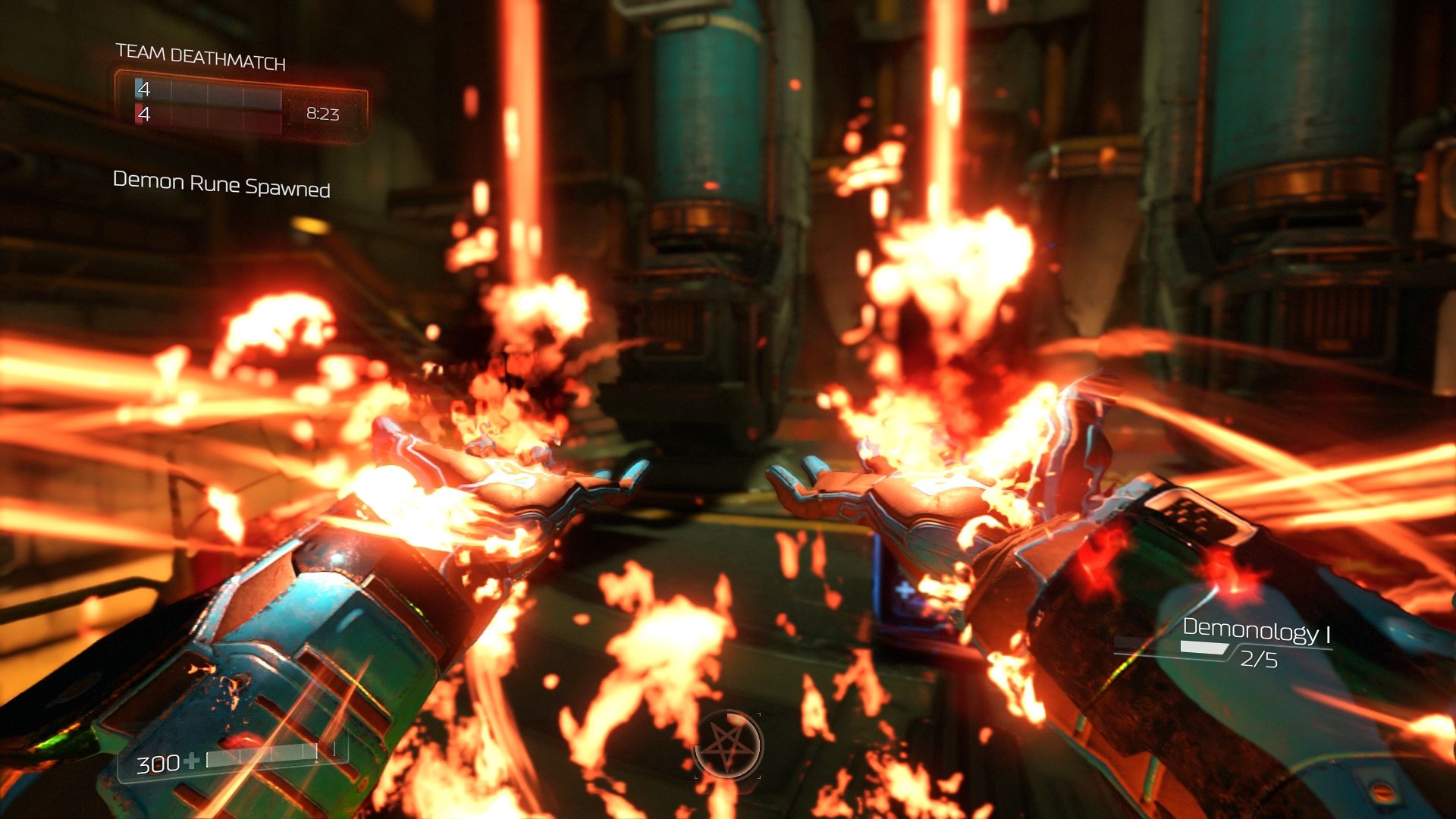 With the game being a beta, it’s not really known how long ago the build was done – so its tough to get a handle on the game graphics ahead of release. At the moment it’s looking good, though there are some caveats. It’s clearly not running at native resolution on Ps4, either that or there’s a really poor FXAA implementation in place blurring the image, and Vsync is disengaged which leads to almost constant tearing. The upside is relatively smooth performance even with all the carnage. The levels & characters do look good though, and the special effects have that extra bit of oomph without going overboard and searing your eyeballs. Overall style of the game seems like a good mix of DOOM & Quake III, especially in level design, with plenty of little details if you live long enough to find them. Audibly the game is as you’d expect from an id shooter. A metal based BGM plays away in the background between rounds, with the decent sound effects taking over during the game. The announcer also adds to the old school deathmatch shooter vibe. It’s not something that’s fitting for all shooters, but it would be huge oversight if not included here.

As you probably gleaned from the preview here, I left the Beta highly impressed. On a technical level things could do with a little work on console, but the gameplay is pretty much spot on & as much as I’d hoped for an old school deatmatch multiplayer for DOOM – I really didn’t anticipate id would deliver something as old school as this. I guess that means I gotta eat crow on that. After the success story of Wolfenstein seeing a revival with New Order, it now looks as though DOOM could be following suit on May 13th.