Return to Popolocrois: Story of Seasons Fairytale is a cross over title formed by Popolocrois and story of seasons (formally harvest moon) developed by XSEED and published by Marvelous in Europe it will be making its appearance on the Nintendo Estore.

Return to Popolocrois sees you once again as Prince Pietro on his newest adventure both similar and new, on his 13th birthday he finds himself and his land falling victim to a new threat. As Pietro enjoys his party a guest reveals her home a far off land called Galariland faces the threat of black beasts rumours of these very beasts now circulate around the people of Popolocrois. Intrigued by the rumours the prince sets out to find out more about these soil destroying monsters. While investigating the local farm he finds himself face to face with them only to be saved by a mysterious woman who tells him of a way to defend his land from the beasts at his door. His resolve strengthened by this chain of events the young prince decides to head of to Galariland to stop the destruction of his home and his people only to find him self stranded far from his home and leaving him no choice but to dig in and tackle the root of the problem to prevent the seeds of darkness from spreading. 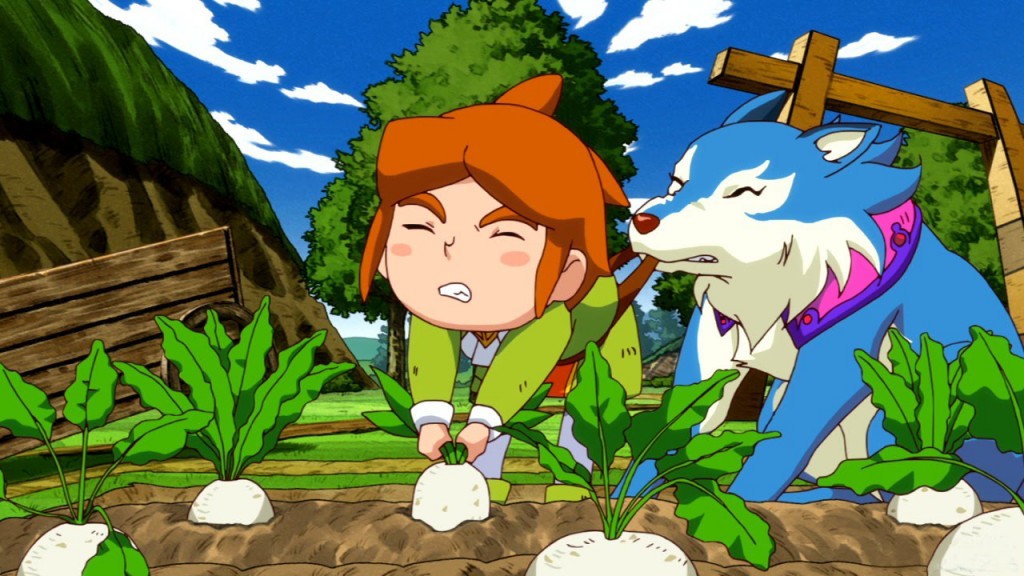 This story plays out really well and fans of the series are sure to get a sense of nostalgia from the opening segment I have been playing for around 37 hours so far admittedly steeping of the main trail quite a bit to take care of other things in the game and so far found it to be rather entertaining if not a little predictable at times, The games cast especially those of your party each have interesting back story to discover along the way while returning party members have been given interesting and oddly bazaar twits furthering both story and character development so even those that played the PSP title have something new to discover and look forward to.

The game’s story is told in typical RPG fashion with text boxes appearing on the top screen but also relies on both adorably cute cut scenes and a fair amount of equally cute of voice acting in both English and Japanese changeable from the configuration menu, I doubt anyone would deny that this all sits very comfortably with the rest of the title. 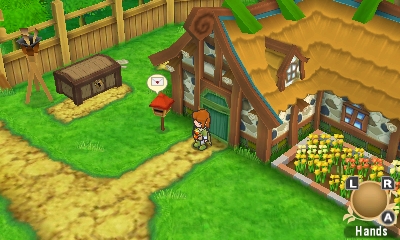 Game play in Return to Popolocrois is essentially split into 2 sections each making up half of the title RPG (Popolocrois) and Farming Sim (Story of Seasons).

RPG- This relates to your random turn based battles, equipment and level up system, all the basics for a RPG are there and honestly could stand alone as a game as after all at its core that is exactly what this title is. Battles are random encounters you and your party will get travailing most areas, these encounters a set out in a grid (much like the previous instalment on the PSP) and are a very simple affair. You will be presented with 5 options Move/Attack, Skill, Item and Run, all of these options do exactly what you would expect with the only option being little more rounded is Skill where you will also find the joint skills for working with other party members to execute stronger skills than you can alone. Overall this system is very straight forward and simple to use for new players while older fans will know exactly what they are doing. In the configuration you can at any time change both the difficulty and frequency of these battles. While equipment can be crafted or brought from store crafted equipment is quite often better reinforcing the need to use the farm and mine minerals. 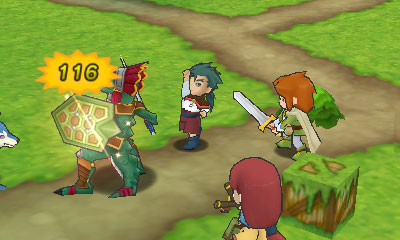 Farming Sim – This is for the most part anything on the side such as earning money, Completing sub-quests and getting the bulk of materials for crafting, Again this could have been a stand alone game like Harvest Moon with some tweaks, this is because when compared to Harvest Moon and other titles like Rune Factory it feels sadly unrefined, There is no in game clock or Day/Night cycle, no fatigue or any form of restriction to stop exploits such as with everything happening in real time. As you play the mine points and bug points become ready to harvested again after you play for a period of time but sleeping will force them to be ready again in seconds. The one plus side to this however is it makes doing everything else incredibly easy from completing quests where you have to deliver items to making weapons and other equipment. You are also not limited to one farm you will unlock more across the map as the story progresses and you help the people of Galariland. Fortunately you will receive a small message at the top of your screen when a crop needs watering or they are ready for harvest so you don’t need to check on them manually every 5 minutes. With all farms available you will find yourself fast travailing back and forth a fair amount to take care of them all. The lack of refinement extends to keeping animals who remain stationary in the barn that simply require you to talk to them to get milk or give them a treat without having to use tools to get milk or brush them, I honestly found this very lacking and missing out a good part of what makes a great farming/life simulator. 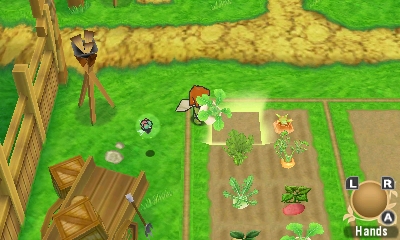 On a whole despite the shortcoming of the farming side it meshes well together, switching from isometric view point to a more heads on view when tending the Fields right down to using your produce and mined materials to synthesis new items or equipment, something that is once again very straight forward as all you have to do is pick any two items be it food, monster drops or precious gem and get a new item. If this wasn’t easy enough already when making something new you’re told if you will be successful or fail, whereas if the item has been created before be it by the same combination of items or not you will be informed that it will make the item. As a result growing produce and mining ore and other materials and using them to create other items will give players a edge in there adventure.

In terms of visuals Return to Popolocrois a Story of Seasons Fairytale sticks true to it’s name with cel-shaded imagery seemingly taken from a children’s storybook book. It’s cute and charming all round much like that of Fantasy Life, this adorable artwork applies to both game-play and cut-scenes. Personally I love the art style in this title and it’s sure to appeal to younger fans. This storybook like artwork works beautifully for all the environments in the title from the farm, our young hero and party will be living on to snow topped mountains and even the character design.

Overall this game is great for the most part, I would have liked to see a little more work on filling out the farming aspects but it is passable and enjoyable even if it is more tailored for newer or perhaps younger fans. In my opinion it’s an introductory title to games like Harvest Moon and Rune Factory, perfect for younger players without been complex or restricting.