Yo Kai Watch is the latest Level 5 3DS title to reach our lovely shores (after some delay) and is hoping to take some of the Pokemon crowd. Will this newcomer with pedigree usurp the current reigning champion or will it’s failings come back to haunt it in the final round? 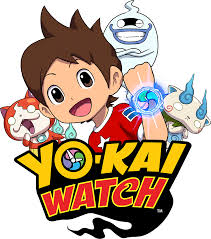 Yo Kai Watch is the latest multimedia giant to come from Japan, in the same vein as Pokemon & .Hack// this has been created in such a way that it can spawn games, anime, manga, toys & even Smartphone games and it just gets lapped up, Having recently taken the latest Star Wars off the #1 spot in Japanese theaters Yo Kai has branched out to the USA & soon our rainy European shores. Now without going into too much detail this game originally release in Japan in 2013 & much like Inazuma Eleven and Professor Layton by the same company (Level 5 more on that later) there has been quite the gap in releases, from what I understand it’s due to getting the merchandise ready for the different regions but as I said I shan’t delve into that. 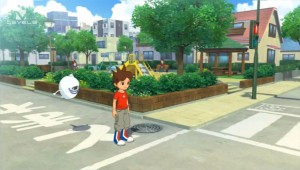 Yo Kai Watch starts off with our protagonist Nate living his normal child like life involving bug catching, events transpire and he ends up meeting Whisper our friendly Yo Kai guide (basically they are ghosts) after the introductions and explanations our heroic duo set off around town to stop the mischievous Yo Kai causing more issues than there were already. Naturally the story gets deeper involving more sinister plots and characters but overall the main plot is rather bog standard, there are some examples of brilliant writing one which comes in the early hours of the game involving one of the Yo Kai & it’s past writing which I felt was quite hard hitting and may be missed on younger players.

Visually this title is one of the strongest looking you’ll find on the 3DS, the character models are are brilliantly detailed with the charm you would expect from Level 5, the Yo Kai designs seem to have taken some hints from the monster designs of Ni No Kuni which is no bad thing. The locations are pleasant to experience and there is some variation, one favourite touch of mine was that when it rains Nate will run around with his Rain Coat on with the hood up, another being each time he leaves the house he puts shoes on at the door. The graphics really help with the overall charm of Yo Kai and the little touches are always pleasing just like the Jump animation in Ni No Kuni it really is the little things that sets this title apart from titles such as Pokemon & Fossil Fighters Frontier. 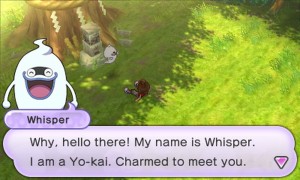 The gameplay is where this little beauty shines, if you aren’t aware this game plays in the style of Pokemon/Digimon catch & train style. The main objective of the game is to befriend & train all the Yo Kai while battling other Yo Kai. There is the standard story mode which will take you between 20 to 30 hours which flies by due to clever writing and brilliant pacing of content, boss battles and the general want to see more of what this game has to offer. There are around 200+ Yo Kai you can befriend during the game most of which tend to appear post game, there are also doors situated around the map that can only be accessed by raising your Yo Kai level, optional bosses and bounty hunts to perform, safe to say Yo Kai Watch is bursting at the seams with content.

Most of your time on Yo Kai you’ll be battling as you should with any Trainer themed game, one of the main differences with this title from the likes of Pokemon is that you don’t actually choose your attacks for the Yo Kai. Much like Digimon World from PsOne the Yo Kai battle on their own and you just kind of guide them in the direction you want them to go, to focus on one particular monster or in the case of the boss monsters a particular place you throw a dart and they will focus on that. You do have control over the super moves the Yo Kai perform, you select a move then perform a short mini game of either Tracing, Spinning or Tapping to execute said move which helps keep you engaged. You’ll also have to worry if your Yo Kai get tainted, if they do you then have to switch it out for another and purify the Yo Kai with one of the above mini games, you’ll enter battle with 6 Yo Kai and you use the bottom touch screen to seamlessly switch them out, each Yo Kai has a specific nature and it’s worth arranging your badges for them to match for additional stat boosts. 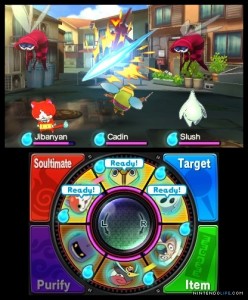 Befriending the Yo Kai can be a pain if you are after certain hard to get Yo Kai, basically it’s similar to Ni No Kuni where when you beat the Yo Kai there is a chance they will approach you for friendship post battle. These chances are usually slim but you can use food items on the Yo Kai you meet to raise that percentage giving you more of a shot at filling your badge collection and getting a pretty meaty team on your side!.  As said previously alot of the Yo Kai are post game and throughout the 20+ Main Quest I only befriended around 40 so it pays to continue on once those credits role. 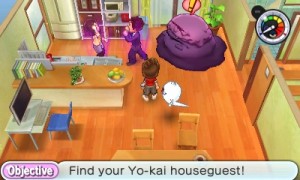 Yo Kai Watch in my opinion is one of the must have titles for the 3DS, it easily rivals the appeal of Pokemon and in some ways actually surpasses the series. It’s got such a charming art style and at points the writing is really gripping it’s just a shame that it isn’t that strong all the way through. Some people may be put off with the lack of choice during battles and the mini games that they put you through, also the main story for the most part is just constant fetch quests. For those willing to put the investment in you’ll have countless Yo Kai to befriend, side quests galore, bounty hunting & more side content to take all the hours away until Yo Kai Watch 2 releases.

Yo Kai Watch has released in Japan, America & Australia we are still waiting the European release but for import savvy players the AUS version will play on any EU 3DS.