This being my first review for the site it does’t bode well when I honestly don’t know what to think or say. First off, I’ve been playing JRPG’s since the first Final Fantasy was released in the West on the Gameboy so have a fair idea of what I like and whether a game plays well, is well written, the mechanics work, it looks good and most importantly: If it’s a compelling game to play or not.

Legend of Legacy is some of these but not all. Let me explain.

Special thanks to Neolestat our newest writer for this review 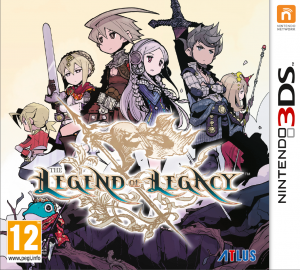 First off, it looks great. The game creates a neat little icon on your 3DS and presents a splash screen that is derivative of most JRPG’s. When you start the game, there’s no fuss, no mini-movie to draw you in (we’ll come back to this later), just ‘Start’, ‘Load’ and ‘Continue’.

This is a game that won’t hold your hand and lead you through a thirteen hour tutorial level. You’re presented with a bunch of preset characters all following the standard JRPG tropes, the warrior, the black mage, the white mage, the paladin, alchemist and umm, the frog thing etc and asked to choose one. Not knowing what to expect from the game I chose the alchemist hoping there would be some kind of crafting system, it honestly had nothing to do with the fact that she was also the least dressed. So I’m not going to pretend, I like a moe game here and there! More importantly she also seemed to be one of the most balanced characters, a nice mix of support and DPS. There are no customisation options and you’re thrown straight into the game.

Apparently I was on an island and on a quest for a holy graal (SIC). I was given two fellow adventurers, a knight and a warrior, one to defend me and one to join me in monster slaying. Both from the original roster I was presented with upon starting the game and both on separate quests as explained by the very short intro movie. Given you can skip the opening movie probably foreshadows multiple play-throughs. During your quest you can eventually recruit all of the characters you rejected and form a party that best suits your play style by swapping out all but your main who remains your main throughout the entire play-through.

An even shorter tutorial explains the fight mechanics to this point and then you’re off on your adventure… Ta-daa! 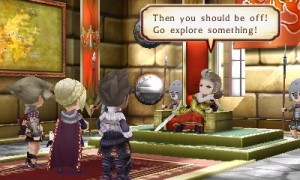 And that my dear readers is almost as much of a explanation as the game gives you. There’s a short, albeit very short introduction to the magic system the game uses and after hours of play-through and five regions uncovered I’m still none the wiser as to what I’m doing or what the ‘King of Adventurers’, the monarch of the only town on the island you’re on and your erstwhile employer during your stay there, wants of you.

To say the game is wanting for explanations either how to quest or even why to quest is an understatement. See how the previously no fuss start fits the game’s ethos?

The mobs in the first dungeon/area are easy to defeat and can be avoided as they are shown on screen rather than invisible random encounters. Once a certain mob or party of mobs are dead in an area they don’t seem to re-spawn and to be fair it’s best ‘not’ to avoid them as fighting and using the skills innate to your class and given by your attuned weapons is the only way to level up.

After a short first mission the game automatically takes you back to town where the said magic tutorial is given and by talking to NPC’s dotted around the small town and looking in the bar you are likely to find the first two new recruits so you can swap out your new friends for should you wish. Having already levelled my two attendee questers a little I saw no reason to swap them out and stuck with them though each party member and new recruit comes with unique abilities. Once recruited your new friends can be swapped in and out of the party at will in the game’s Inn where you can also save and heal. In the first five hours I had found five of the unchosen bringing my choice to seven partners from which to choose two for a party of three. 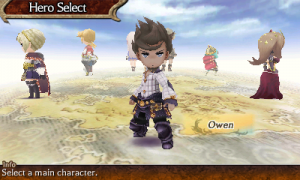 There is a small shop in town and the aforementioned bar which seems to serve more as an area for NPC’s to hang out rather than a place that benefits you with skills or knowledge. (So far?) The shop seems to restock incredibly slowly and there is a boat à la Monster Hunter that can be sent out for a sum of money to bring back goods from greener, more abundant lands. Street-Passing with other Legend of Legacy owners while your ship is sailing apparently nets rarer and more abundant returns for your buck. Giving you yet another reason to tote your 3DS with you wherever you go.

The ‘King of Adventurers’ also resides in town and a certain NPC suggests repeatedly that you share with him any knowledge you uncover, however, after unlocking five new areas the King still had nothing newer to say than when I first saw him. It seems like getting information out of this game is like pulling winkles from their shell with the painty end of a paint brush.

In all fairness I don’t dislike the game. Regardless of not having a clue what I was doing, the RNG element of the one hit whole party kill during boss fights and the sameness of the colour pallet swapped enemies the game does have it’s charms if you suffer from any form of repetitive mental illness like OCD. The addition of a R button + X quick-save means that if you’re a canny saver the one hit party kill is never really a set-back and with luck you’ll beat the boss the second, third or fourth time round if you’re unlucky. 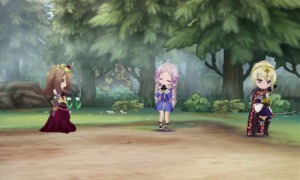 The visuals are charming if a little samey with each new area being made up of so many mini areas to explore and fill the unfilled map. (which you can sell later as information to the shop. The mini areas are all the same as the starting area with a slight change in mobs per area. The character designs perfectly represent their tropes and the town, although sparse, looks pretty.

Audibly the game is excellent. The composer is no Nobuo Uematsu but accomplished all the same. I never felt the need to turn the sound down or off, in-fact, I was actually listening with headphones to hear the full glory of the tunes. It would be nice if at some point you could unlock a sound-test option to listen to particular areas tunes out of the game. But I doubt it. 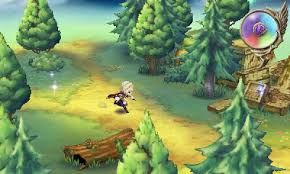 All in all, with the quick-save option this game can be played in very short bursts just levelling up your characters if you are OCD inclined as I am. If you’re looking for a ‘compelling’ game that drags you into a story, this isn’t it. Please look elsewhere. But, it suits me for a game I’ll play while waiting at the Doctor’s or sitting on the Tube hoping at some point I’ll unlock a further piece of story while levelling each of my talents to their full potential and hoping that I’ll get some interesting items via Streetpass.