Dragon Ball Z: Extreme Butoden saw release in Japan earlier this year, and has now made its way to the west via Bandai Namco. Developed by Arc system Works, known in the fighting arena for their work on the Gulty Gear & BlazBlue series, there’s definetely potential for another decent fighting game to hit the Nintendo 3DS. Let’s see if it can go the distance, or if it just fumbles it’s Senzu beans after the first round instead… 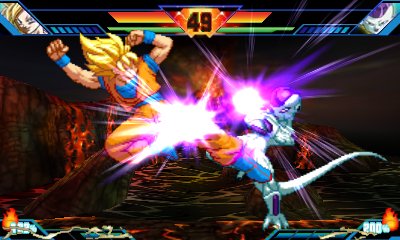 Extreme Butoden doesn’t opt for its own self-contained story within the DBZ universe, instead the main story mode offers a retelling of the DBZ saga. The story is broken up into chapters featuring about 10 fights in each, and the first chapter acts as a prologue which has to be completed before your able to sample most of the other modes offered by the game – which unfortunately doesn’t take any time at all. It’s unfortunate in that it’s indicative of the game as a whole, each chapter can be completed in roughly 5 minutes (which includes the dialogue) as entire arcs are brushed over to introduce fights between characters. Very little context is given to what has transpired leading up to the fight, almost all dialogue before a fight is literally just before the fight, which will leave newcomers to the franchise a little confused to say the least. After the prologue is done you’ll have unlocked ‘what if’ missions for other characters in the story mode, which sounds good on paper, but suffers from the same issue as the prologue. 10 fights, lack of story context and lightning quick completion time. You can easily finish the entire story mode in a single sitting, which will no doubt leave you unimpressed – a feeling that lingers throughout. 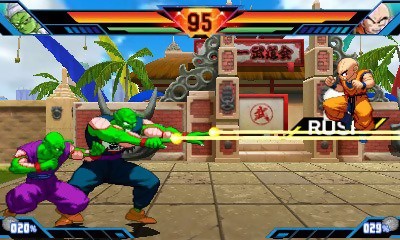 Finishing the story prologue rewards you with the adventure mode. This mode is a welcomed diversion following the disappointing story mode, which sees you traversing areas along paths and completing quests. The quest come in the form of missions, complete a certain combo before the KO for example, which rewards you with progress through the area and new gear or roster fighters upon each stage completion. It’s a much more rewarding mode than the story, and could last longer too depending on how difficult you find the quests, with another game mode (Extreme World Tournament is a tough challenge based affair) unlocked upon finishing the adventure. Once done with these, there’s the usual Versus offerings against either the CPU or against other people. The Versus mode against other folk is unfortunately not online, only offering local play – which thankfully spares me the online beatings I usually get on fighting games. The game does offer other unlocks in the form of a gallery, as well as streetpass connectivity, but little else to keep you returning. 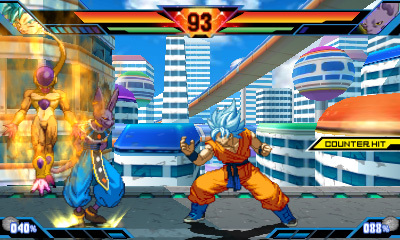 If you’re coming into this expecting Budokin, then you may be disappointed. It’s not that the game plays poorly or anything, it’s just not as fast & fluid as those releases. Fighting here is slower paced & seems a little more tactical. Combo combinations for the simpler moves are easy to pull off, you’ll be throwing destructo discs as Krillin in no time, the bigger moves call for more difficulty combinations – which the games slower pace does help with to be honest. The main addition seems to be the tag-team aspect. This allows you to take up to 3 fighters into a match and switch them at will using the 3DS touchpad. Characters health etc doesn’t seem to regenerate when swapped out, so making sure you switch out for a fresh fighter at the right moment is key. You’ll also have to be careful to balance your team as each fighter has a different power rating and some may flounder quicker than others. Picking can be a headscratcher once you’ve played enough as there’s quite a sizeable roster and each features there own moves to learn, which does add some more much needed longetivity. The game does enough to differentiate itself a little from other DBZ fighters, but it never seems to excel beyond being a competent fighter. 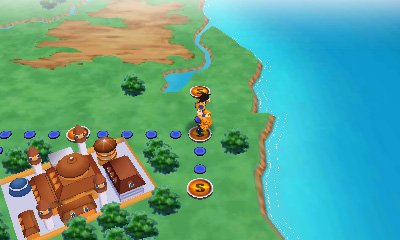 The game does fare well with its it’s presentation. Sprite detail & animation is pretty good, allowing each characters style and personality to shine through during the bouts. The SFX are also good, with those now ubiquitous attacks rendered well given the choice of a 2D foreground. Backgrounds are 3D instead, and to be honest aren’t quite as good as the 2D portions of the presentation. Detail is a little lacking and nothing much seems to be going on either. This must be helping to keep the framerate up as it stays smooth pretty much all the time, even in 3D. The stereoscopic output of the game ain’t too good though and is probably the games weakest aspect visually. It’s a little disappointing if you like your 3D, there’s some depth between the planes – but it doesn’t really pop at all with any effects or dimensionality. The game’s audio is good though. It packs quite a few tracks from the series, with other rock-based BGM’s thrown into the mix, with full voice acting on all the characters. There’s no English voice audio with this localisation, the original Japanese voice acting has been brought over instead. 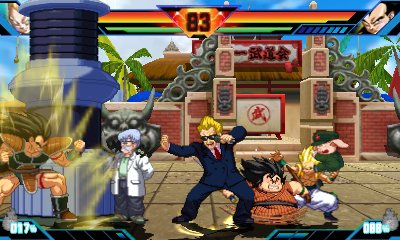 Competent gameplay & decent sprite work does little to shake the underwhelming feeling you’ll feel for the most part with this DBZ release. The story mode, which features ‘what if’ missions, is disappointing to say the least, with other game modes having to pick up the slack for its lack of longevity. The few glimmers do little to shake the feeling that Extreme Butoden is little more than an average package, which even hardcore DBZ fans may be left feeling unimpressed by.