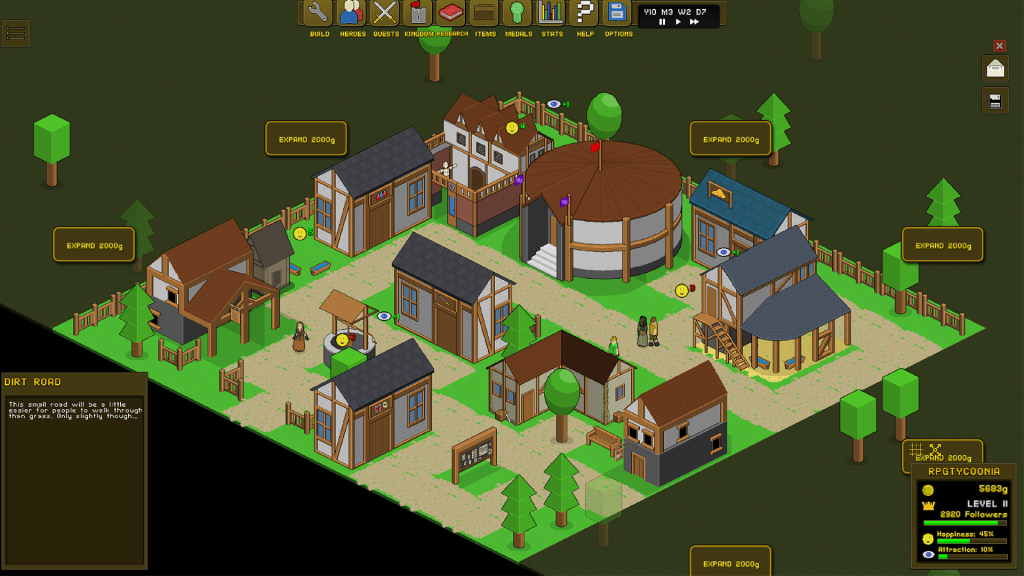 RPG Tycoon is an early access steam title from the one man team Skatanic Studios published by GSProductions Ltd and released into the early access section on the 4th of August 2015.

Being as this is a work in progress title, some of my opinions expressed may not be the same when it is fully released.

RPG Tycoon is a title seemingly attempting to emulate the success of older titles such as Theme Park, Theme Hospital, Rollercoaster Tycoon and in some small way the Sims. With a genre with such hit titles around it is nice to see a small developer attempting to gain a footing, and considering it has been made by a single person there is a lot to give credit for but also there are sadly some glaring issues for me personally.

In RPG Tycoon you take on the role of ruler of a small flourishing kingdom and it is your job to build up the fame, wealth and size of said kingdom. This is done by placing buildings, hiring heroes and sending them on quests to help the surrounding population and level up your kingdom to unlock further opportunities for expansion. 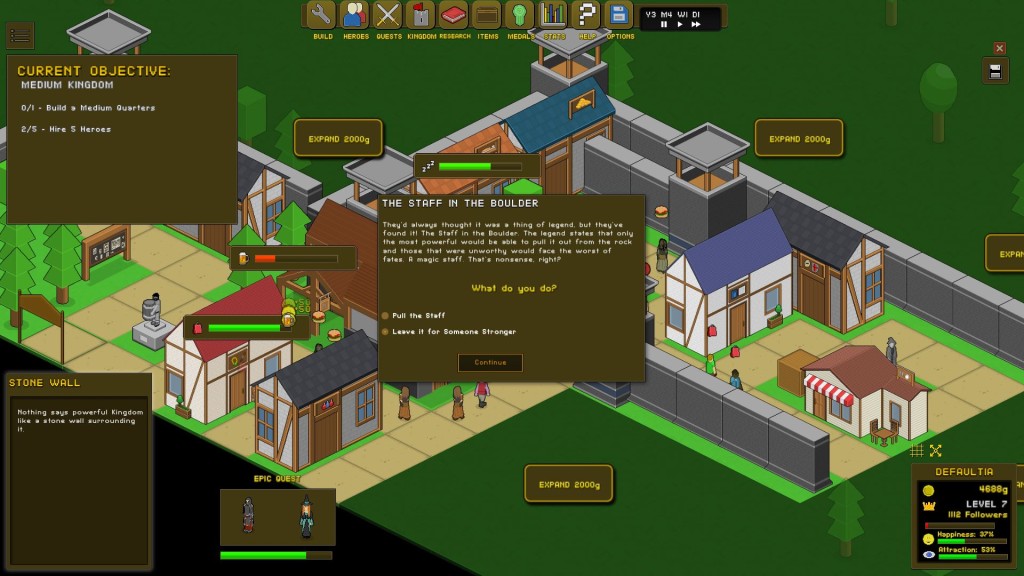 There is no overarching story and really the building up of your kingdom is little more than a means to an end, the real focus is around hiring heroes and then sending them on quests. You are presented with different quest types ranging from sending a single hero to a nearby village to assist them with bandit attacks or menial farmhand tasks to epic quests where an entire party of heroes are sent on a dangerous quest and you are presented with occasional text situations where you make a choice and a dice roll decides your parties fate. When your heroes return from quests they gain experience based on their performance and suitability to the quest you sent them on, this levelling is very well done and will allow you to plan ahead in how you wish to quest. In its current state the gameplay is in the short term fun, but lacking any serious depth. The buildings make you money and unlock other things to build but beyond that they do very little, and with the pace of the game you very quickly start to annoy the villages by constantly sending heroes to do tasks when they don’t want you to. However if you are not sending heroes away then really you have very little to do beyond stare at the screen waiting for your money to build up so you can construct the next building. You do have a constantly decreasing meter which tells you how pretty your kingdom is, but all you can really do is just pop down a bench here, or a tree there to constantly top it up.

In my time playing I had actually managed to annoy all the local villages with the constant harassment of my heroes looking for stuff to do and they all defected to rival kingdoms leaving me with practically nothing to actually do anymore. 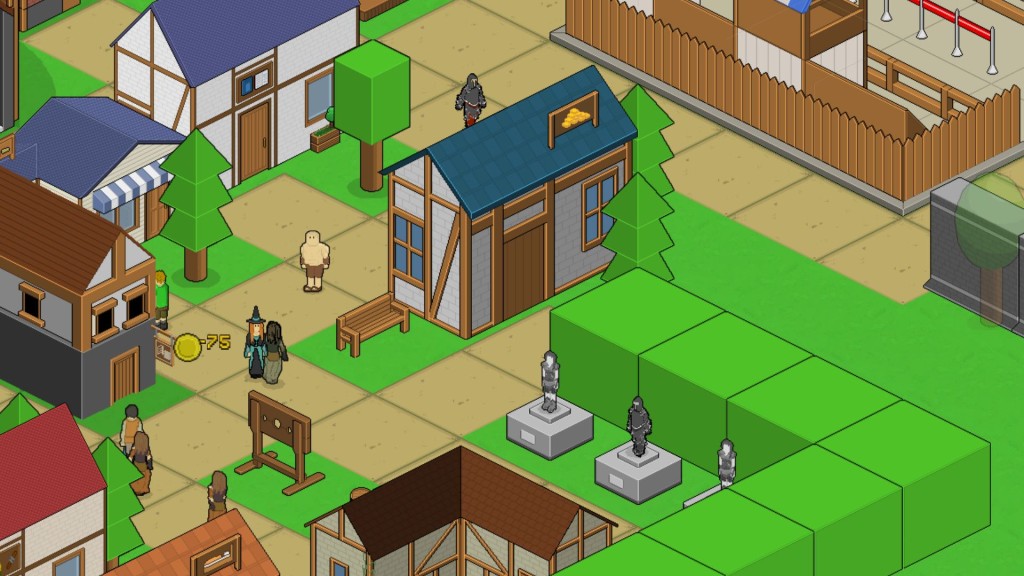 Unfortunately that lack of depth is one of the largest annoyances for me, but the biggest by far was the distinct lack of humour. The titles it is competing with in spirit have always been known for their silly humour, be it the names of illnesses and types of treatments in Theme Hospital, or watching the often amusing results of your actions in Rollercoaster Tycoon and the Sims. There is nothing to be seen like that in RPG Tycoon with the exception of the handful of help topics that have been filled in containing a few jokes, help topics I will add are rarely of any actual help right now. I spent a fair amount of time trying to work out the system where when you send a hero on a quest they have to take 6 items with them, they have to be the right items in the right slot for the right quest but it is never really very clear, in the end it was a certain amount of guesswork that enabled me to work it all out but I still have no idea what it actually does.

Graphically RPG Tycoon is fairly good, with colourful cartoony sprites milling around the village, the buildings also look very nice. This isn’t a title where there is actually very much to see, you are confined to the small area of your kingdom with text pop ups which thankfully are very easy to read.

Sound design for me is a very sore point, it is obvious a fair bit of effort has been put into the music to make it match to the graphical style. But sadly this effort has for me been a waste as I quickly became annoyed by the tinny midi sounds, I attempted to skip through and listen to a few tracks hoping it was just the menu track that was the issue but it was not and in the end I muted it entirely. Through muting the music I quickly realised there is very little in the way of other sounds, shops occasionally making a clinking sound as adventurers make purchases, the clunk of messages arriving but very little else.

Control and performance wise there is very little to say, the game controls very easily with all the menus working exactly as they are supposed to. Performance is high on whatever you may play it on as it is a very low spec game.

In conclusion RPG Tycoon feels like a game very early into its production, it has a solid framework in place but very little else to speak of, hopefully in time it will fill out more, giving more of a reason to play, and that much needed injection of humour would go a long way towards bridging the game with the big titles of the genre. I would actually say this is an ideal candidate for being a mobile platform title rather than PC and I expect in that market it could get a lot more success.