The Book of Unwritten Tales 2 is the latest in the series and started its life as a Kickstarter campaign headed by King Games.  Building upon the acclaim and popularity of the first games, King Games promised the sequel to be just as good, bigger and full of the humour found in the first.  Have they managed to reach these goals?  Let me take you on an adventure…..

Book of Unwritten Tales 2 follows the antics of four adventurers, Wilbur, Nate, Ivo and Critter.  They are an adventure in the fantasy world of Aventasia in search for the cause of what is turning all the beasts in the land into puppies and all the castles into doll houses.  It sounds absolute bonkers for a story setting but this is the sort of humour you should expect out of this game.  The script is written very well and includes some rather humorous remarks to gaming clichés and popular franchises.  For those in the know of any fantasy series should feel very at home here with the Book of Unwritten Tales 2.  With you controlling multiply characters the script feels fresh and as you meet the ever so wacky characters in the world of Aventasia you will have different dialogues depending on which character you are currently playing as.  One down side of the script is that there is so much of it.  The humour is great but it is delivered in such huge chunks that you may start getting board and find yourself skipping.  The beauty of the humour in the old school point and click adventures is that it was delivered in just the right amount.  Sitting at 20 hours of content though, it is hard to deny that the Book of Unwritten Tales 2 is not worth the asking price. 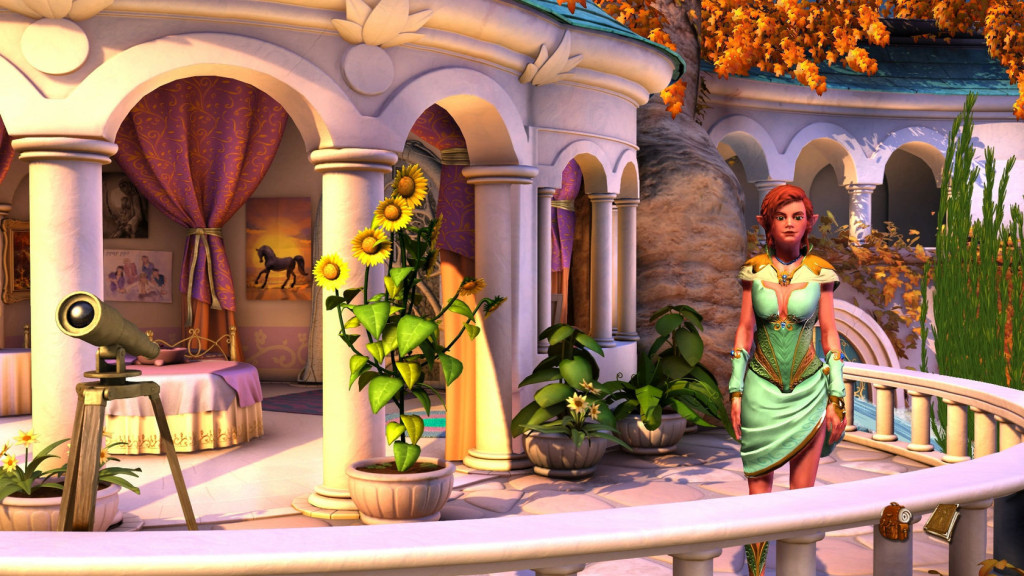 For those not aware,  The Book of Unwritten Tales 2 is a point & click adventure game.  Basically, you move around a scene, point at an item of interest and then click on it to interact.  This is the traditional PC method but on the consoles (PS4 in this case), the controls have been slightly modified.  Instead of moving around by click on an area you will move your current hero by using the left analogue stick and then to interact with an object you press the X button.  If you do not fancy moving around to every object though, all interaction can be brought up on the screen by pressing the Square button.  Once on the screen each option can be scrolled through until you get to the action you require.  It is a different system to that of the traditional point and click but it works well.  For dedicated console players it is fine but those wanting a true point on click experience may want to stick the PC version. 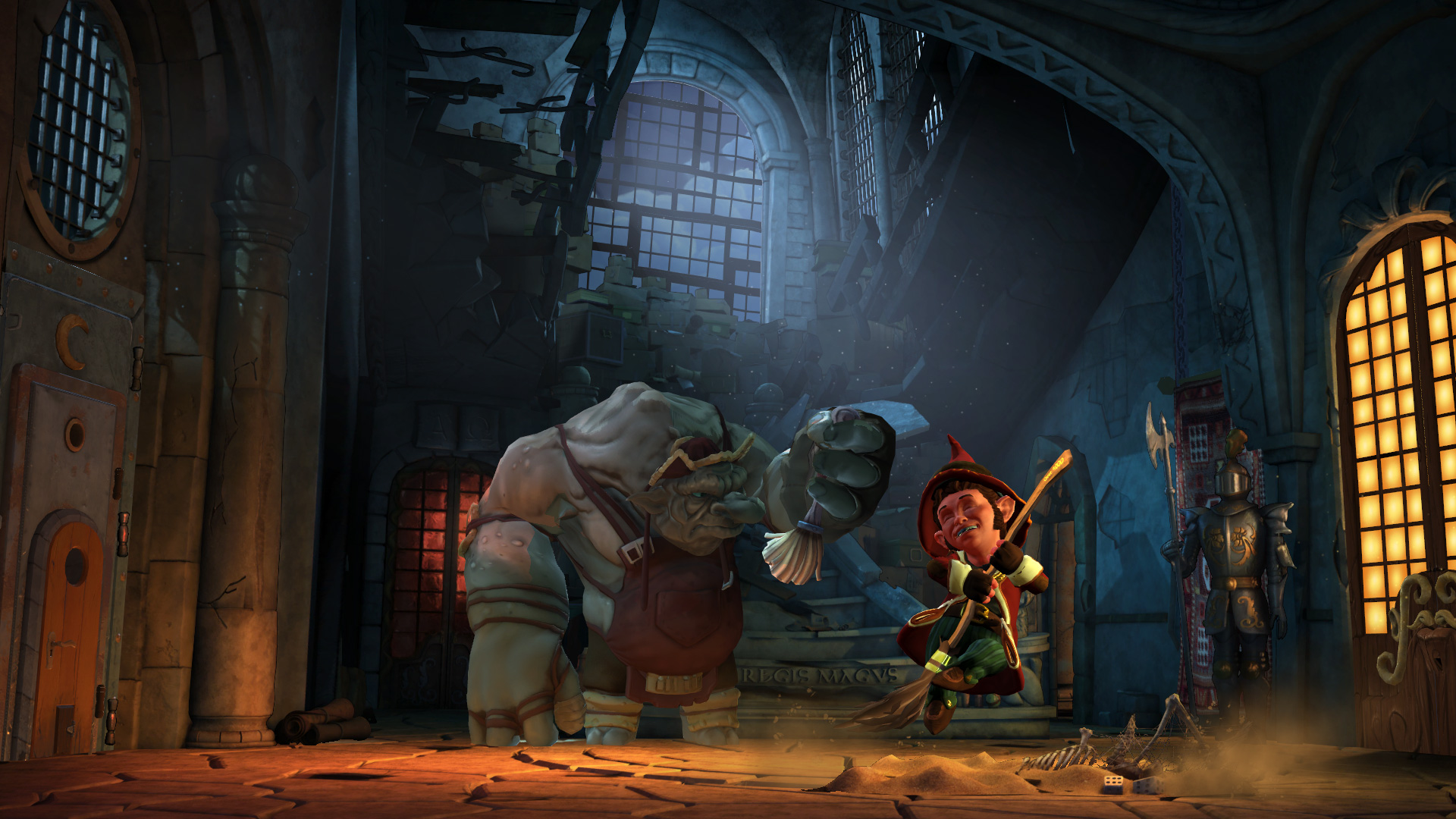 Another feature of the point and click genre is puzzles.  It is not a half decent adventure if it does not contain a puzzle or two.  In more modern game that call themselves point and click adventures I feel that this element has been lost.  Not here though.  There are plenty of puzzles present and a lot of them are optional.  I grew up playing point and click adventures in the 90’s so I like a good puzzle that really makes me think; ones that make you really think outside the box are my favourite.  The Book of Unwritten Tales 2 contains its fair share of difficult puzzles that really make you think but some are very straight forward.  In fact some can be easily solved by trying every possible combination that is presented in front of you.

Technically, the Book of Unwritten Tales 2 is off the chart.  There is a full voice cast, a fully orchestrated sound track and a deep well designed world.  The world created is grand and adds more detail to the already crazy inhabitants of Aventasia.  However you look at it, you have to admit that the production values for this title are very high. 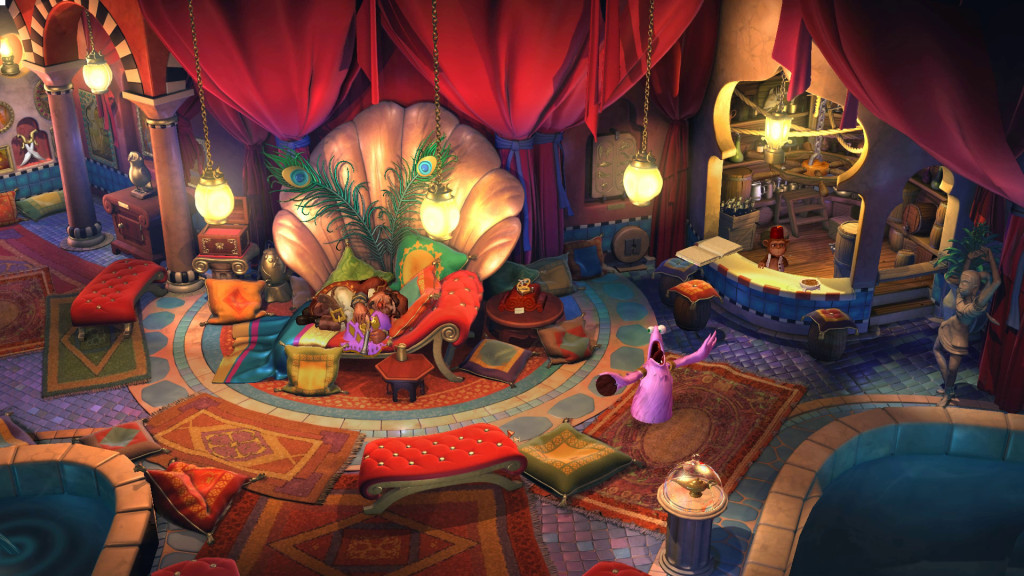 The Book of Unwritten Tales 2 is an excellent example of a point and click adventure game.  Telltale Games may have changed the way the modern gamer looks at this genre but Unwritten Tales 2 shows the true roots of the genre.  With an excellent world, a clever (but over stuffed) script and a good variety of puzzles, this is a dream game for those who are itching to relive the glory days of the Point & Click genre.