Hatsune Miku & Co have been around the rhythm game scene for a while now. Project Diva F on Playstation 3 marked the first release in the west for the vocaloids a couple of years back, after spending a few years previously on PsP & in arcades in Japan, now they are making their way onto Nintendo’s stage with Project Mirai DX. Has SEGA orchestrated a beautiful symphony, or composed a disaster?  Let’s see how well the series has transitioned to Ninty’s handheld… 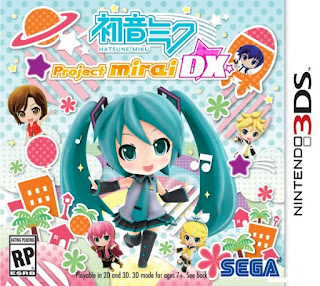 As Project Mirai DX is a typical rhythm game, which leaves no story mode to discuss for the player to experience, there’s plenty of things to do that should keep you glued to the screen. The rhythm mode offers almost 50 songs with multiple difficulties & control methods to get through, there’s a decent mix of new and returning classics as well on the roster. This is the best mode to start with as there’s plenty of rewards to unlock, which comes in handy for the Hangout mode. Here you can spend some time with your chosen partner, although it’s not quite as in-depth as the Diva room, as you can offer them snacks & play Reversi to pass the time and see some amusing reactionary animations. Once you’ve started to get yourself some money & unlocks from completing songs in the rhythm mode, the store will be your next port of call. This is split into three floors which offer different items to purchase, clothes and snacks for your partner for example, with one floor setup exclusively for room items. As with other games in the series, you can buy new items and decorate your abode. You can also give your partner an allowance which they’ll spend on random items, with the other vocaloids also visiting your home and dropping off a gift occasionally. There isn’t quite the same amount of items as elsewhere (same with snacks & drinks too), but there’s enough for you to give the place a unique flavour. If you’re looking to feed your creative side, the game does offer editing options in the form of a Dance Studio. Here you’ll be able to create your own dance routines using a simple system, it’s not as in-depth or as customisable as the Project Diva series, which can then be viewed in full at a later time. Unfortunately there is no online section for sharing your creations & sampling that of others. It’s a kick in the gut considering the popularity of this on other systems, but there is a way to share the content via Streetpass. Your streetpass card can feature a dance routine & even a custom tune which you can quickly create via the tiny piano stamp on the main menu. I’m not even gonna pretend that it’s a decent substitute for the lack on online sharing though. Still, the streamlining won’t affect a series fans enjoyment of the game – and newcomers are probably wondering what the fuss is about. 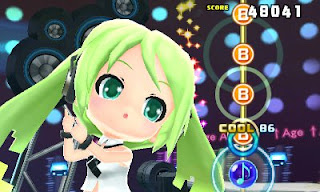 The game doesn’t just have the rhythm game & the usual gubbins found within a release from this series. Hangout mode doesn’t just allow you to interact & pamper your partner, as there’s a fully functional game of Reversi you can face off against your partner on. This comes with all manner of great reaction animations from your opponent, who will also surprise you with moves you wouldn’t expect, and can offer some stern difficulty at times (It took me a few tries to notch my first win [although never playing Reversi before meant I had to get the hang of the game first]) If that doesn’t keep you occupied, there’s also a good game of Puyo Puyo to be had. On offer is classic mode or Project Mirai (which is similar with a Vocaloid skin & specific reactions) and the multiple difficulties allow you to tailor things to your comfort level. That would’ve been good enough, but a 2P mode has also been via local play. There’s probably more of a chance you wont use it, an online option would’ve been stellar as it may have seen a decent amount of usage from puzzle fans as well, but it at least adds a little longevity to the distraction if you know others with the game locally. 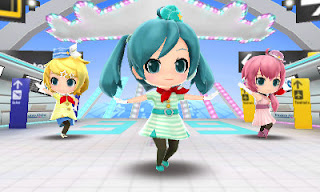 The rhythm gameplay for Mirai is similar to other releases in the series, but does differentiate itself with a few tweaks and additions. As you would expect with the game on 3DS, there are multiple control options, with a touch & standard button system to choose from. Out of the two I prefer the standard button control as its closer to the rest of the series, but that doesn’t mean the touch system is without merit. It actually works really well. Button prompts are replaced with a simple tap, with an occasional slide prompt thrown in to mix things up, that feels a little easier to use than expected. Saying that, choosing the button control system also has the A/B/X/Y buttons placed onto the touchpad to give you the option to use those instead. It’s safe to say there’s plenty of options on offer for everyone. There’s also ways of earning extra money to spend at the store as the game makes use of rainbow coloured hold sections that reward you with money the faster you can twiddle the analogue. Mixing up the difficulty also throws in extra button combinations to add a little more challenge, the jump from easy to normal will surprise at first. With the more limited screen space on the 3DS, a new way of delivering the on-screen button prompts has been used. The prompts now follow a blue line along the screen instead of the usual flying in from every direction, which in some ways is an improvement as you’ll never lose the prompt amongst the background. At its core, this is still very much a Project Diva/Mirai release which newcomers & veterans will be able to ease into at their chosen pace. 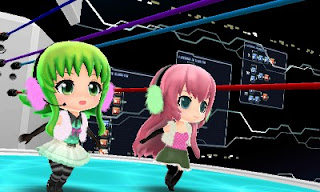 Graphically the game also differs from the other games in the series too. Instead of looking to try and cram the fidelity offered by the recent Ps3 & Vita releases into the 3DS, although spruced up PsP visuals would’ve slotted the release alongside others, a unique Nendoroid style is used instead for the vocaloids. It’s a style that surely suits the 3DS, although some of the dance animations can look a tad iffy on the new models as they seem to be using the same ones as used elsewhere in the series, with a good amount of detail & character on show. The background PV’s are packed with the variety you expect, and can occasionally look quite good with a decent amount of separation & depth in 3D. Performance is key for a game of this type, and Project Mirai delivers in spades. Whether your chosen method of viewing is 2D or 3D, you’ll be treated to smooth framerate that never seems to falter. As a 3D fan, I’m gonna give the developer extra kudos for this as performance is usually lower when playing in 3D on most other games, and a great showing there has the knock on effect of 2D performance being pristine. Audio is another key area, and with the games file size clocking in at over 17,000 blocks, it’s not something to worry about. The overall quality of the songs & SFX is relatively crisp, which is hardly surprising given the game it is and its singular focus on vocaloid rhythm mania. Presentation is top-notch, without seeming to push & strain the 3DS too much, which also has the benefit of the Nedoroid styled characters helping Project Mirai stand out a little more from the rest of the series. 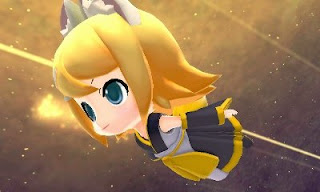 Project Mirai DX is great showing for the vocaloids on the 3DS, but compared to its siblings – the streamlining of modes & content does take the shine off things. The tweaks to the game for the 3DS though are worked really well, and seem an improvement, with the Nendoroid styling giving the release some added visual flavour. Fans will find enough different to enjoy and appreciate over previous releases, whilst newcomers will be able to tailor the experience to enjoy everything the game has to offer. It’s not perfect, but it’s a great start on 3DS for Hatsune Miku & Co in the west.