Earth Defense Force 5 is the latest release in Sandlots long-running series that brings the bug hunting to earth. With the previous EDF game to hit the Ps4 being a revamp of 2025, this release marks the latest iteration of the series and looks to offer some new additions. Would you like to know more? Then read on! 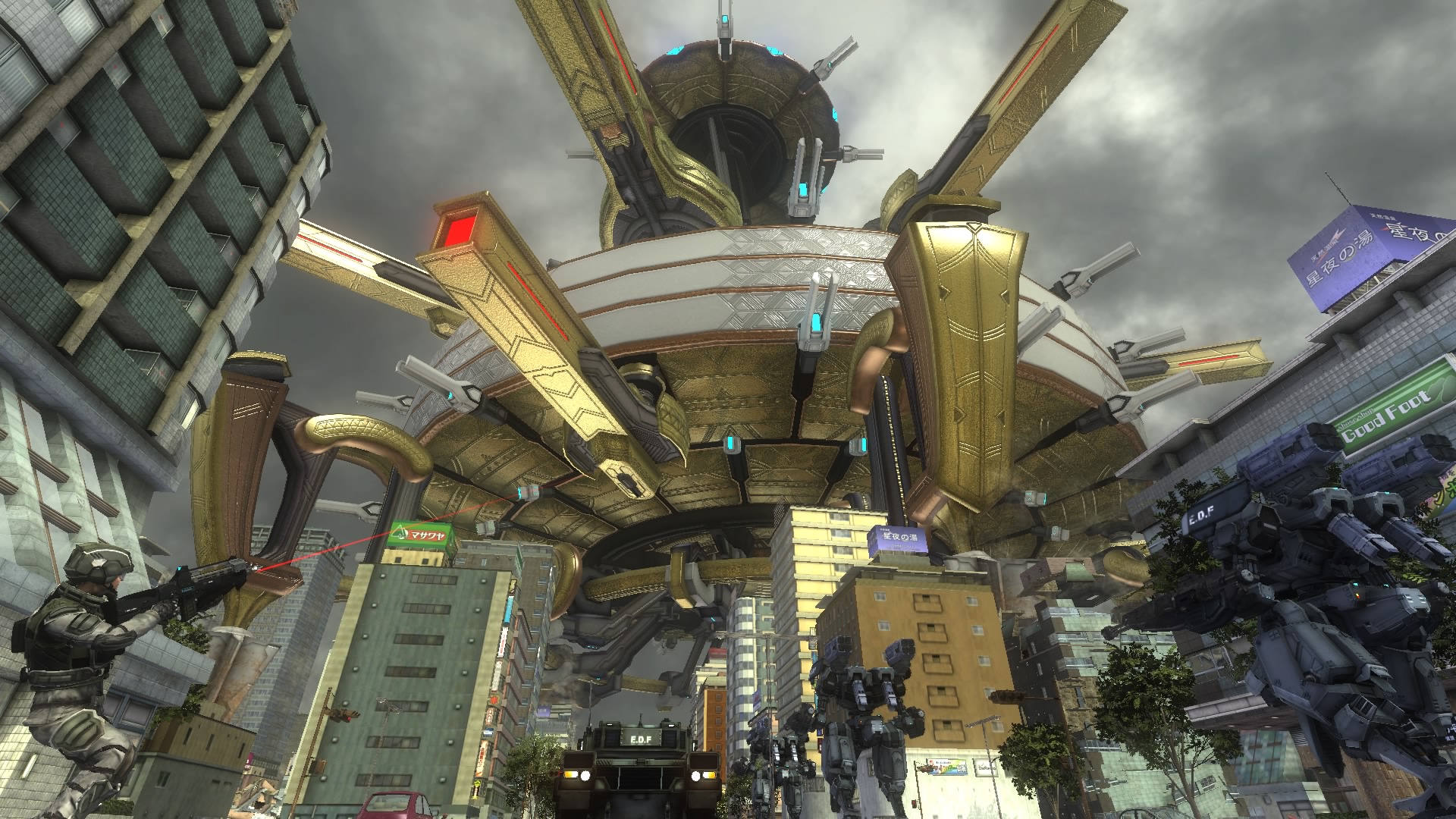 It’s 2022 and the game opens up with you taking on a security role at EDF base 228, an underground facilty, that quickly comes under attack by giant ants. Where did they come from? Which nation was able to create these!? It’s not till that is answered and you’ll find yourself squarely at the front in an intergalactic battle for mankinds survival.  Story has always really been something of a basic alien invasion & you need to put a stop to it with the EDF, must admit I was a tad underwhelmed seeing the game return to the original invasion again instead of carrying on from 2025. Thankfully the game offers over 100 missions in total to blast through and 4 difficulties to up the challenge, you’ll soon forget which invasion your stopping as the bugs pile up.

The co-op also makes a return with some exclusive missions to boot, and playing online with a 4 person squad is still the best way to play – especially at higher difficulties with a balanced squad to push the destruction to the max. If you can’t get online then the option of offline split-screen is still here. Games tend to be doing away with this feature of late, so its good to see a developer sticking with it, and it makes for a great quick blast when not able to get online or to share the fun with someone locally. 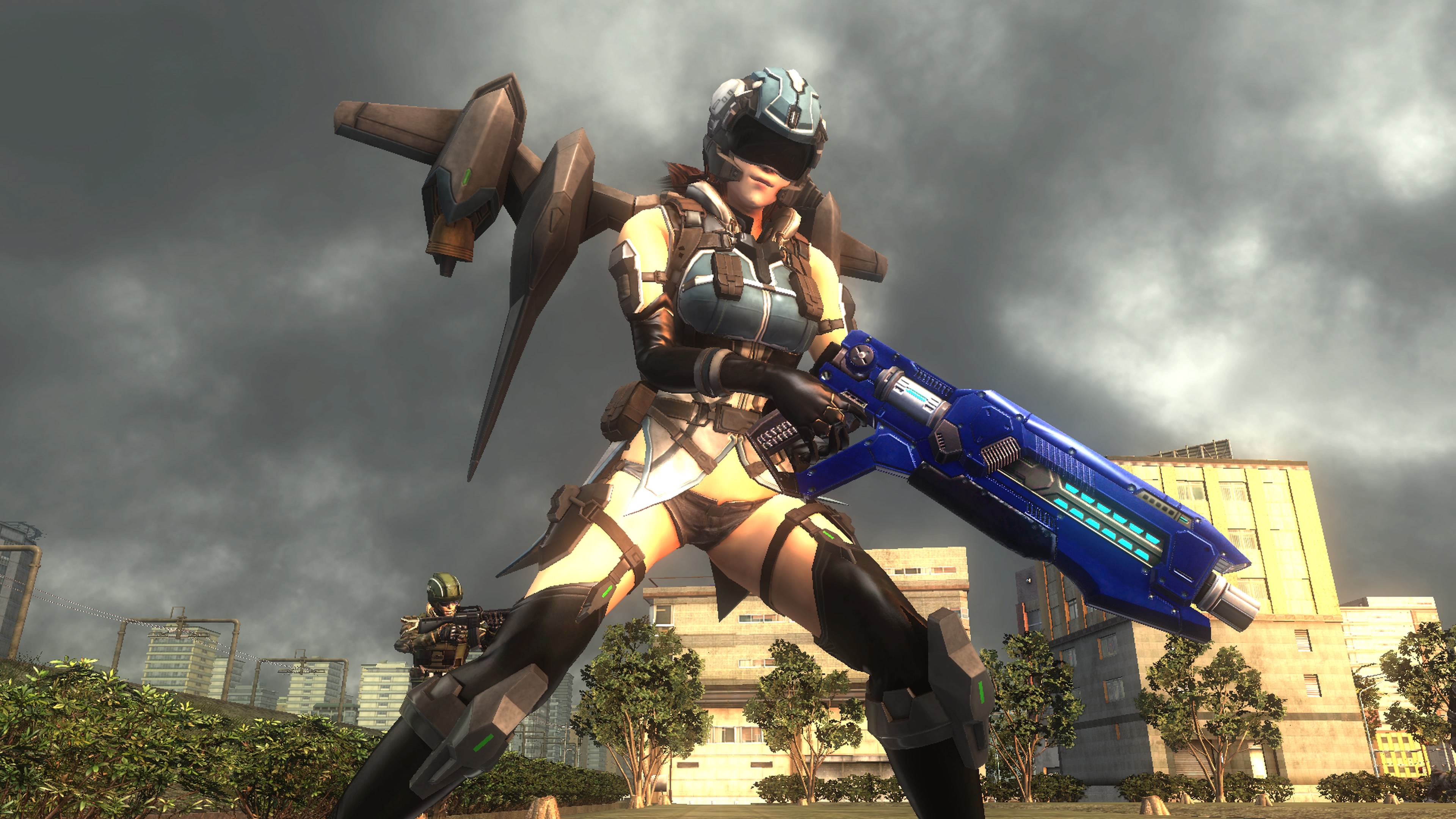 There’s always one aspect of the series that has been a constant over the years, and that is performance. If anyone was hoping the latest in the series would bring smooth performance, they will be disappointed. Even playing on PS4 Pro has slowdown, though the game seems to screen tear more than drop frames for some improvement, so performance on base will likely be similar to previous games. On the flipside though there are some improvements to the game visually, nothing revelatory mind you. Things are slightly improved over 4.1 on the visual, some of the background detail is pretty crazy with the amount of detail in store fronts etc, but it does have an overall look that’s quite similar to the previous game on Ps4 – even down to the destruction.

The biggest boost comes with the effects work during a skirmish. This mainly comes in the form of enemy damage, not something you’ll really notice in the heat of battle though I guess. Pieces of enemies now fly off as you chip away at their armour, leaving visual damage and pools of blood around your downed foes. It certainly makes for a more visceral fight and aftermath to it. The similarities extend to the audio side of the game, its slightly different, but overall similar in tone. To be honest though the series has always been a little weak on this side of things, but the cheesy dialogue still offers some funny moments that are now a staple of the series. Hopefully the next in the series will see another jump in presentation like we saw from 2025 on Ps3 to 4.1 on Ps4, as 5 is only a minor upgrade. 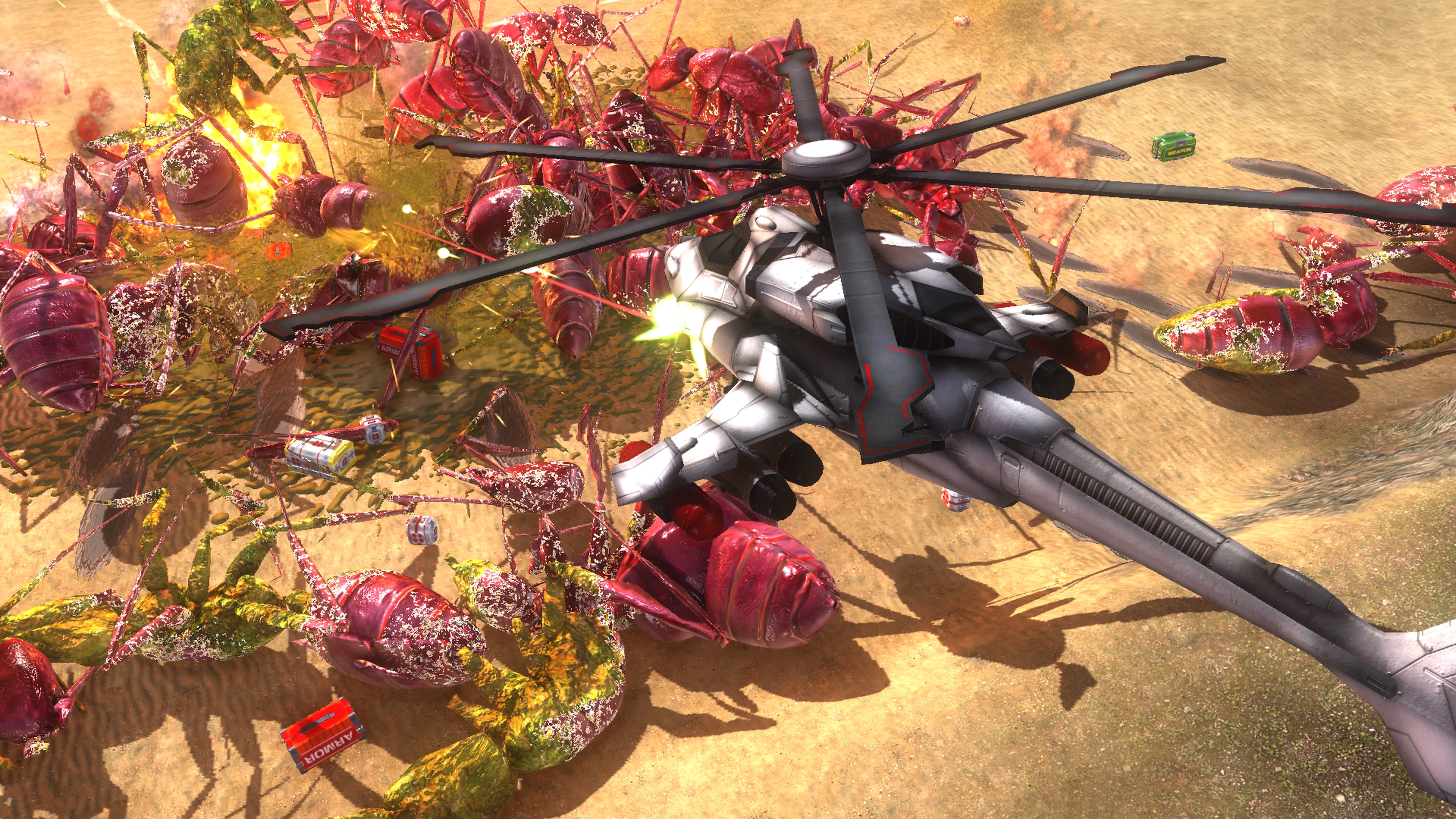 The gameplay loop for 5 is the same as all those EDF releases of years gone by, clear out the bug infestation for rewards & to clear stages. The odds stack up as you progress through the game, with the ground & air filling with all manner of bugs & alien ships, and you’ll occasionally have the chance to hop into a tank etc to add some spice to the mix. More variety is afforded by the returning classes from the previous game. Ranger(Basic class with a wide variety of weapons & can drive vehicles), Wing Diver (Weak but can deal big damage with plasma weapons, can also fly), Air Raider (Support class that can call in air strikes & vehicles) and the Fencer (Heavy & slow, but can soak damage and protect squadmates).

What will keep you coming back for more though is the weapon loot. Each time a foe is down there’s a chance it will drop either health, amour (increases characters overall health) or a weapon crate. As before these are random, you’ll always dash at the first site of green, and the contents are unknown till the end of the stage. A nice tweak here means duplicates aren’t throwaways as before, now they go towards upgrading the current weapon you already have. This helps alleviate some disappointment in loot drops and can also boost your current weapons to make the next stage a little easier. There’s very little else new to the series aside from some other minor tweaks with regards to gameplay, whether that’s a good or bad thing is down to you, but it would be nice to get some expansion to the combat – maybe take the fight to the aliens in orbit. I guess we’ll have to wait & see for the inevitable EDF 6. 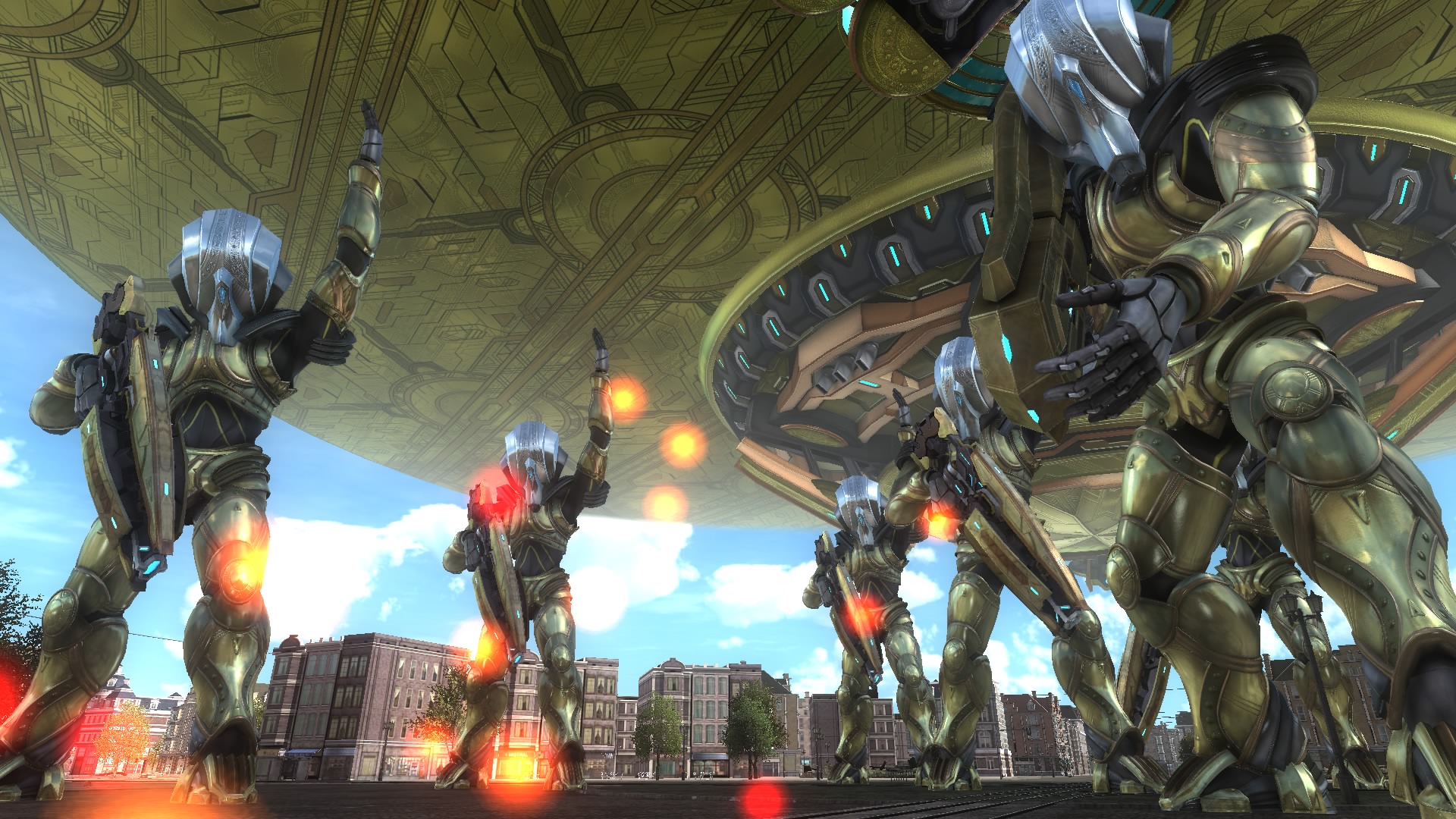 Earth Defense Force 5 takes what we got with 4.1 and sticks to that tried & true formula, only really tweaking a few areas and adding some additional enemies, vehicles etc to play with. The gameplay is still just as good as ever, with plenty of content to blast through, and the co-op bug hunts are where this game shines. It’s a shame that other areas of the game are still to catch up with the bombastic gameplay, visuals haven’t improved much and performance continues to be a stigma for the series (even on Ps4 Pro), but series veterans (like myself) will be able to overlook these as always. EDF 5 is certainly the best way to jump into the series for newcomers or those away for a while, as long as you’re mindful of what the series offers.