Hakuoki: Edo Blossoms is a romantic visual novel created and published by Idea Factory which continues on from the events of Hakuoki: Kyoto Winds. However, even if you are not familiar with the series, you won’t have any problems if you want to start with Edo Blossoms.

You play as Chizuru Yukimura, (she can be renamed) who is seeking out her missing father. In 1864 she visits Kyoto to find him, but instead finds a secret within a group of Samurai known as the Shinsengumi. Secretly some members are “Fury,” especially strong people whose hair becomes white and their eyes crimson when their full power is activated.

A human becomes a Fury by drinking the water of life which heals any wound, so strong are the effects that they can save a person from near death. There is a price to be paid, however. After taking the water of life the individual will suffer great pain in sunlight and have fits which also cause huge amounts of pain if they’re not careful to avoid them. Drinking blood alleviates their pain, but it also causes them to become more corrupt.

Since the protagonist found the group’s secret and the Shinsengumi are also seeking her father, they asked if she would live with them. She enjoyed her time working with the group, but unfortunately, the men were defeated in combat by three demons and forced to leave the city for Edo. The three demons are in pursuit of the protagonist because she is of demon lineage and they wish to have her marry a demon lord.

Everything within the game is beautifully drawn and presented, some stages have special event artwork which are just gorgeous and will have you wanting to spend several minutes looking over them carefully. Thankfully there is a gallery so you can feast your eyes on them again later.

The music is also wonderful and memorable, and even though there isn’t a great amount of different tracks, none of the soundtrack ever feels like it has over-stayed its welcome. It has a strong Japanese vibe to it, which is fitting since the game is set in Japan. Some people may be disappointed to know that there is no option to play with an English voice-over, only English text. 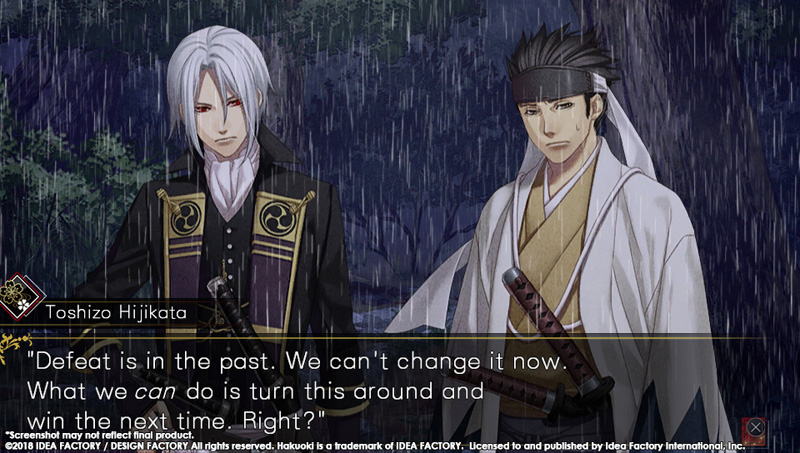 At the beginning of the game, you must select which of the twelve males you would like the protagonist to become romantically involved with. The story will change depending on which man you decide to romance.

There are not many choices throughout the game, but the ones you do have are important as each one changes the course of the story and gives you a chance to become closer to your chosen love interest. They also effect which of the 30 endings you will receive. You will know when you’ve picked a response that pleased him soon after doing so, because a butterfly will appear to indicate the deepening of your relationship. 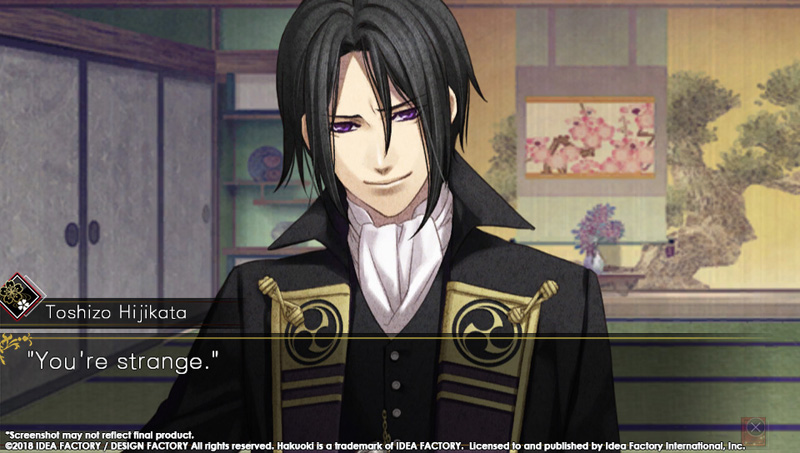 The length of the stories also change depending on how close the protagonist is with the chosen male character. If you are not close to him at all then the story will be cut short and there will be no romantic scenes. However, once you have completed a chapter, you can select it from the main menu and manipulate how close the two of you are. Some characters also have a ‘corruption’ rating which can also be altered when picking out a chapter.

Hakuoki: Edo Blossoms is purely a text game, but it has some interesting elements such as ‘key terms’ which are highlighted in red and, reading them is optional but you will learn some history if you take the time to check them out. When playing on Vita, you can move through the dialogue boxes by touching the screen. The touchscreen can also be used to do other tasks like pulling up the menu and viewing a history of the current conversations between characters.

Edo Blossoms is a beautifully crafted game, with plenty of story branches to work your way through. If you want to see every ending it will take you a lot of time, so there’s plenty of replay value here. Overall it is an interesting and entertaining set of romantic stories, but sadly sometimes let down a little by some awkward dialogue.