Wulverblade performs a story that many might already know.  It is 120AD, the Romans have seized control of the majority of South Britannia and now are looking to march north to claim all of Britannia for themselves.  Little did they know that the guardian of the northern tribes, Caradoc, is ready for them and is ready to bring war to the 9th Legion of Rome.

No one can stand in the way of Caradoc as he protects the land he loves.  Blood will be shed. 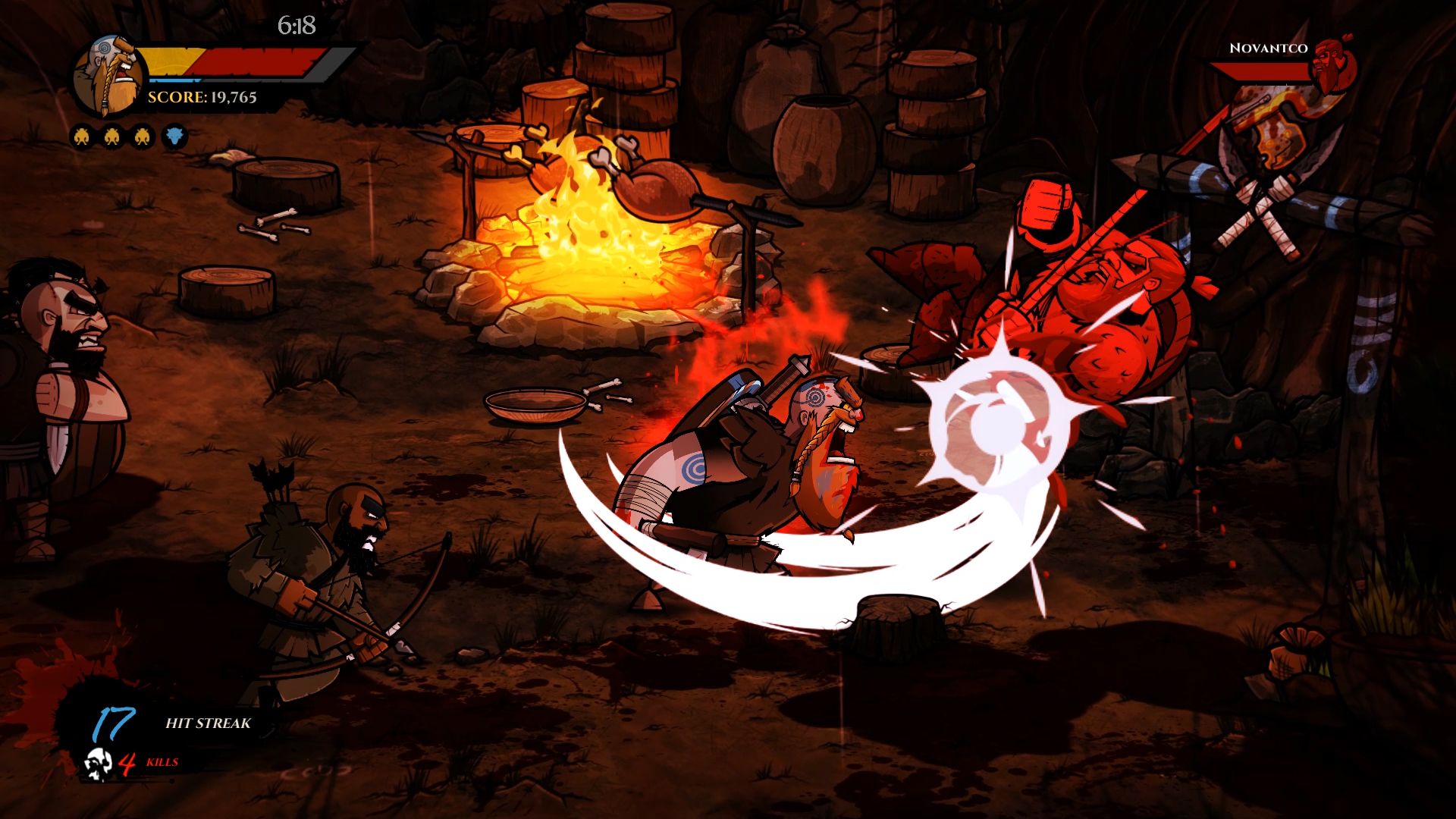 As a 2D side scrolling brawler you will be moving from left to right clearing each screen of enemies blocking your path.  Armed with a standard attack, a heavy attack and some special powers, the shedding of blood should feel great but Wulverblade trips over itself right at the start.

For me, brawlers have to be smooth with a satisfying feeling when completing a stage.  Wulverblade is halfway there and me explain why.

The game is plagued by clunky, stiff controls with a scheme that slows down the gameplay dramatically.  You have an option to play through the game using one of three characters who have different stats that affects the way the game plays.  The choices are fast but weak, strong but slow and your standard middle of the road brute.  I went with the later to get the general experience and if that is anything to go by, I worry for the others.

You can move up and down the screen as well as side to side which does help combat but I did find it difficult to line myself up enemies as they approached, especially when I had to turn the opposite way to attack.  I was always being caught off guard as I thought I had landed the first blow.  The biggest contributing factor to this problem is the speed of movement.  You sluggishly move around the stage at a snail’s space and even the sprint button is not super effective as you will ever charge into an enemy (which is useful I will admit) or hit the end of the stage, interrupting the flow of combat.  The combat itself is not too bad but I felt that you could easily get interrupted and that the hit boxes were not perfect, especially when hitting within your arms reach.  There were many times where I could not “reach” and enemy on screen but they could hit me just fine.

My biggest bug bear on the controls is the block and dodge.  The block is assigned to a single button which is fine.  It takes a little while to get the timing right but if you block at the right time, you can counter resulting in a fierce attack, which is very satisfying to pull off.  However, the roll is a different story.  When blocking you must press R2 and a direction to roll and on paper it sounds simple but it reality this is not the case.  The timing is very precise for this movement and if you are just off by a millisecond, you will find yourself miss timing a block and taking damage.

It could be down to input delay but it did ruin the experience for me. 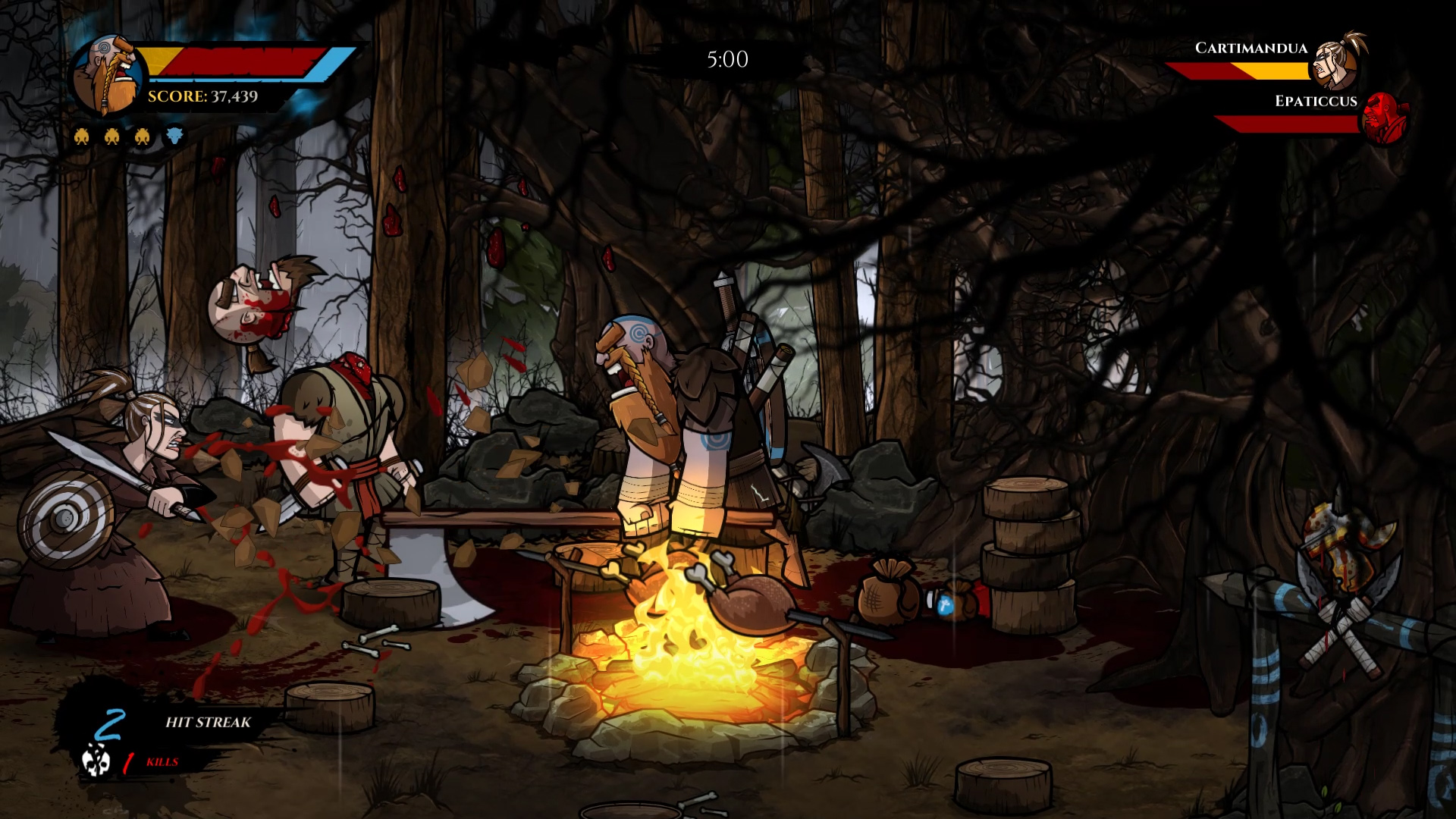 This game is presented in a high resolution cartoon style with characters that resemble cut out puppets whose limbs flail around easily.  It works well as it gives the characters expression with little effort.  The voice acting is spot on along with the exciting soundtrack that adds realism to an already wonderful world.  What also aids this world creation is that each stage is based upon a real place and you have to opportunity to view these places through the built in videos.

Wulverbland does offer a complete package if side scrolling brawlers are your thing.  You have a complete story mode spanning 8 well designed levels.  If that is too little for you, there is an arcade mode which is basically the story mode but old school rules.  Three lives, no continues. Overall, Wulverblade offers a fun experience that is held back by a clunky control scheme.  It may just that you need to get use to the timing of attacks but unfortunately that did not come to me during my playthrough.

It has character, charm and you can see a lot of love has been poured into this title.  It has been made by gamers, for gamers and even with it’s issues I can see players adapting and sinking many hours into this good old fashion brawler.