Senran Kagura Peach Beach Splash is the latest spin-off to hit the series, with Tamsoft putting aside the Hack & slash gameplay the series is known for to try something a little different again. This time we have a third person shooter. With water pistols. Intrigued? Read on to get the low down.. 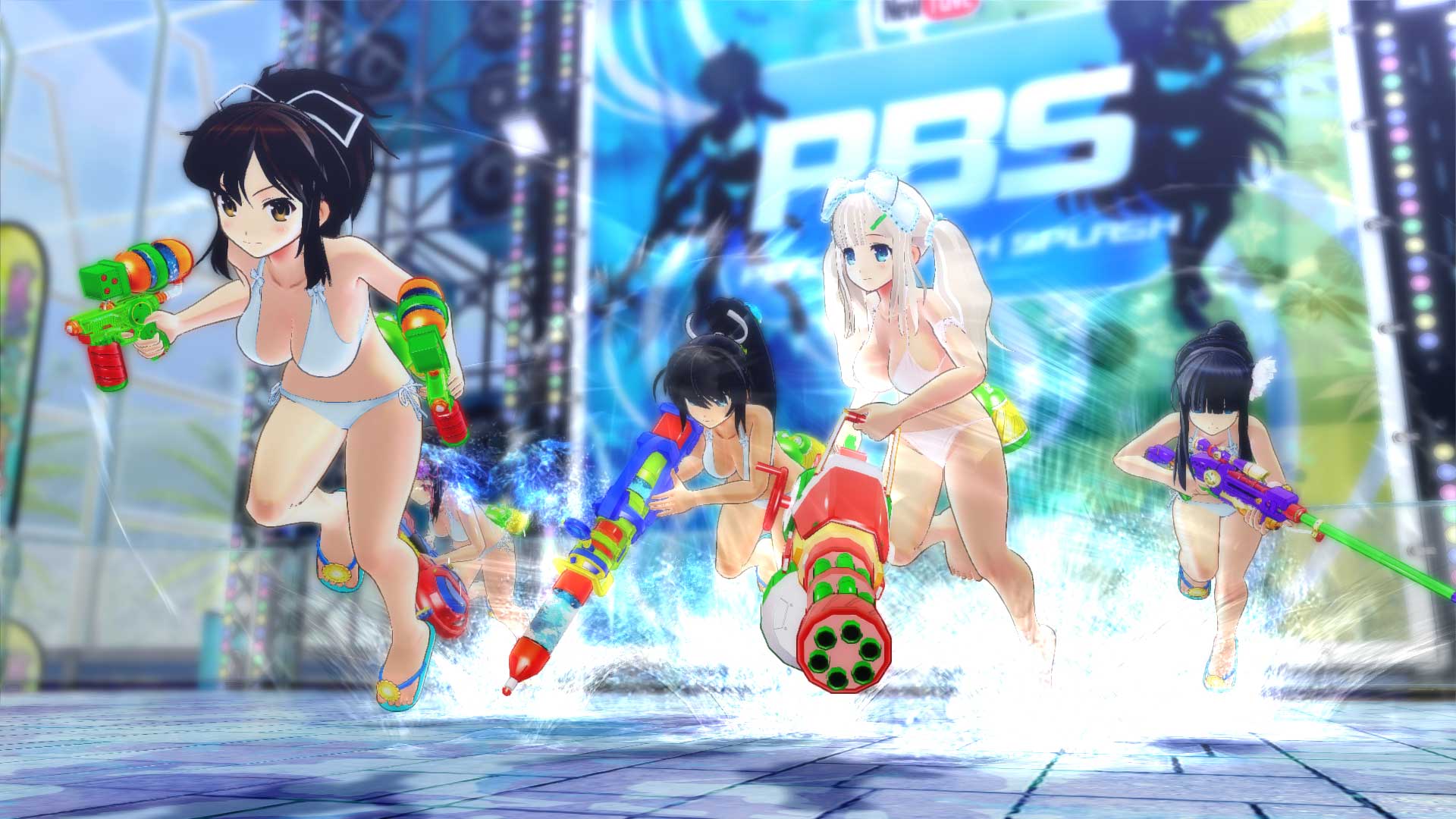 This spin-off sees the girls from the 4 Shinobi schools being invited to a special event, dubbed Peach Beach Splash, that is said to bestow a wish upon the victor of tournaments final. With the event broadcast across the shinobi world via NewTube, the latest tournament is sure to excite. The series spin-offs usually follow this kind of narrative, which likely lets the writers cut loose, as the writing is as humorous as ever – though we do still get the odd serious moment too. You’ll find the story mode broken into 4 sections for each school as they all receive their own storyline detailing their route to the final and subsequent wish. Veterans of the series will find a similar story delivery as expected of a mainline release, VN dialogue & detailed CG’s, which is of the usual high quality as the dialogue sections use the games animated 3D models. The only real stickler to the games story mode is length. Missions still have a portable feel to them and with there only being 10 for each school, things don’t last too long. You’re probably only looking at around 5 hours max to finishing all 4 of the schools storylines, on one difficulty. Thankfully there’s plenty to do outside the story mode.

Outside of the games story mode you’ll thankfully find extra content to take a splash with. There’s additional stories for other characters not featured in the roster for the 4 main schools, with a few extra side stories for some of the main characters. These should add a few extra hours as well as give you more opportunities for rewards & character unlocks. We then have a tournament style mode which sees you build your own custom group and take on increasingly difficult missions that increases the rewards. Once your fed up of keeping the girls to yourself on the single player modes tho you can head online for some arena based PvP alongside a wave based PvE co-op mode. Given the fast paced nature of the gameplay (more on that later) the online could prove to be a good distraction from the norm, as long as folk stick around for a while on the servers. The game actually feels more at home during PvP due to its fast paced arena based nature. 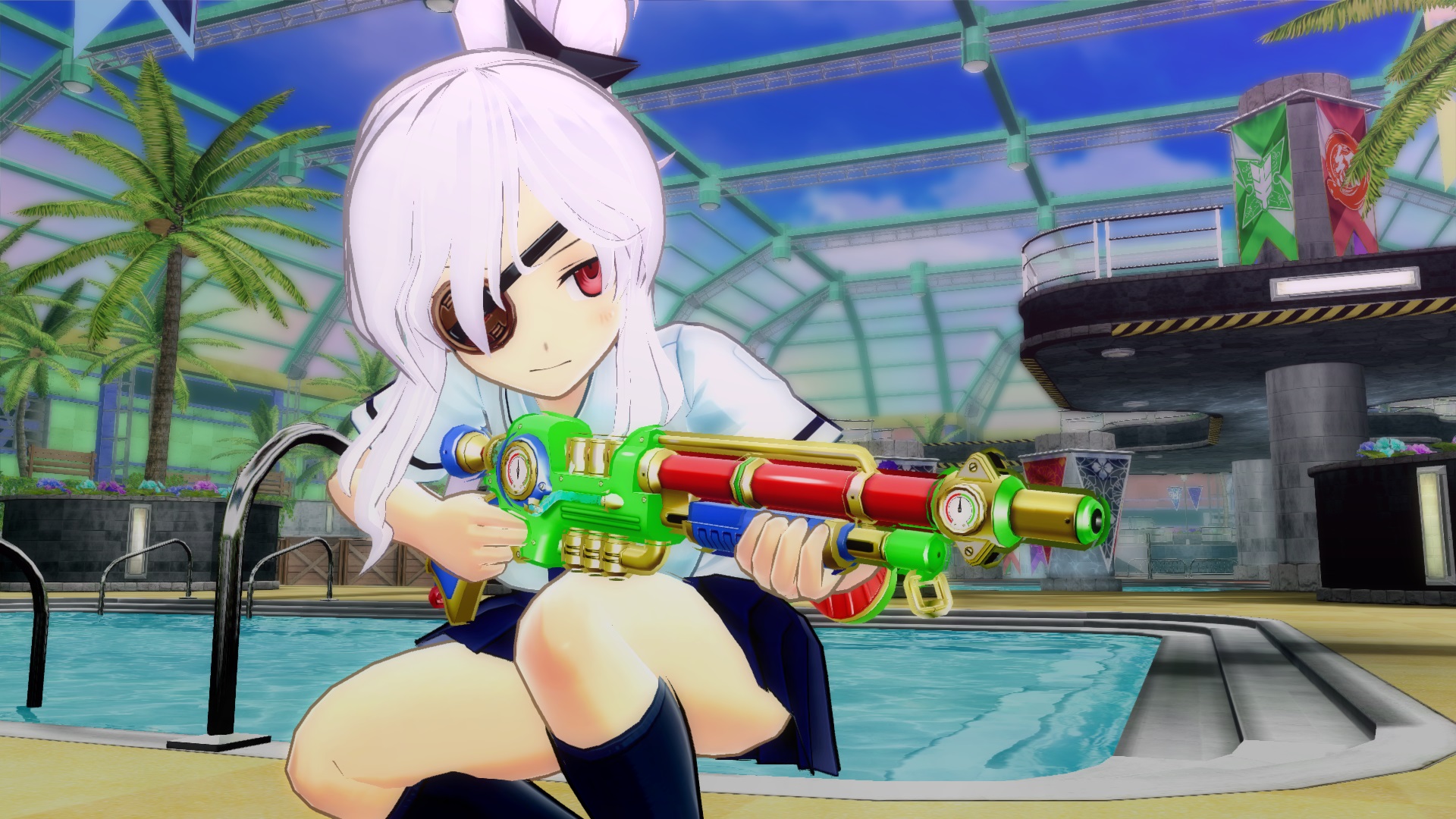 With development of this spin-off focused on Sony’s home console, it’s no surprise to find the graphical fidelity has improved over previous releases – though it’s not a huge leap by any stretch of the imagination. As always the character models are exemplary and a little more refined over previous releases with some minor tweaks to some of the girls design, and there’s plenty of events CG’s packed with detail to unlock. With water being such a big part of the game, it’s no surprise to see a liberal use of particle effects to give the fights an added spectacle as the water is sprayed in all directions. The biggest improvement comes in the environment detail tho. Having smaller arenas certainly helps here as they are packed with objects and there’s a nice bump overall in texture detail, you’ll rarely find any PSVita assets in this one. You’d be hard pressed to not appreciate the audio side of things either. The high quality of the voice acting is here as expected, and the varied soundtrack fits the situations perfectly – whether you’re getting intimate with your favourite girl or finishing off foes in the arena.

It’s not all as beautiful as a sunset reflecting off Mirai’s soaked rump though, as there is a couple of sticklers regarding performance. Whilst the game targets 60fps, It usually doesn’t hit that – even on the Ps4 Pro. General performance is good but once the fighting starts things start to get a little flaky as the frames drop to accommodate the massive amount of effects on screen – especially with 5v5 skirmishes. With regards to the Ps4 Pro, though the game has support for it, there doesn’t seem to be much of an improvement. Aside from the fps bump, which sees the game improving a lot during the large encounters, the only other info I can find is for improved particle effects. No resolution bump or anything else visually. Still, the performance increase is welcomed as the game fps now only drops into the high 40’s as opposed to high 30’s during the more explosive bouts. 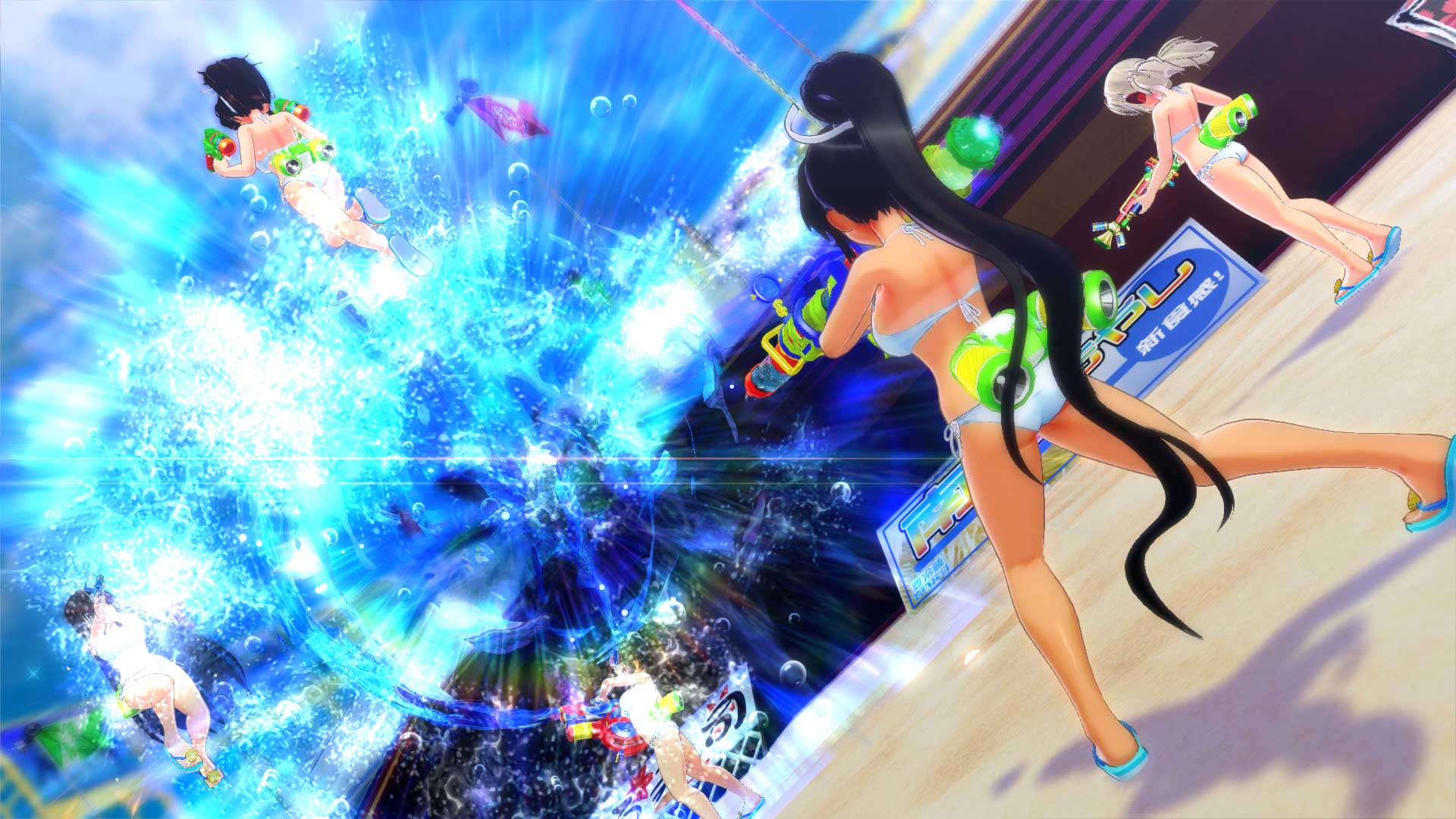 As is usually the case with Senran Kagura spin-offs, gone is the hack & slash gameplay found in the mainline series. This time they’ve gone with an arena third person shooter, with water guns of course. Stages usually play out in a similar way, destroy cannon fodder and then take down other girls, and are kept short. It’s actually quite good, offering a fast & frenetic shootout, with the games card system coming into play for customising abilities. Completing missions will see you rewarded with cash & a card pack, higher difficulties reward card packs with higher chance of rares etc. All the characters feature on the cards and offer different abilities and boosts as the game lacks the shinobi transformations and melee combat in other SK games. Cards also come into play when leveling up as any you receive in packs you already have go into a separate pile. These cards can then be applied to any others, such as character, weapon, skills etc to level them up. Leveling up weapons is interesting as not only does it increase the stats, but the physical look of the weapon changes too.

The cash earned can be spent at the store, typical of a Senran Kagura game. The store here though does offer more than just costumes and collectibles. Completing storylines will unlock card packs within the store to purchase, with the medallions you receive also trade-able within the store for better cards too. The cards are a pretty cool addition overall, offering a great collectible pull alongside being a good indicator for your loadouts. You’ll have to get the rarer cards for more risque designs tho. Unlocks & costumes are purchasable too with the cash, and once you’ve nabbed some clothing you’ll likely end up at the dressing room. Here you customise the girls attire with new swimsuits or accessories, as well as then customise a group to create photos using numerous poses. There’s also an additional mode within that allows you to get ‘intimate’ with the girls by various means, something fans will no doubt dive in to. The ecchi side of the game is as prevalent as always, though not as sweet as Bon Appetit and it’s desserts. You’ll have enough opportunities during the stages to get some awe inspiring life and hometown, especially once a foe has been downed. Still, you don’t have to do any of these things either and most of the ecchi can be skipped by if that’s not your thing. 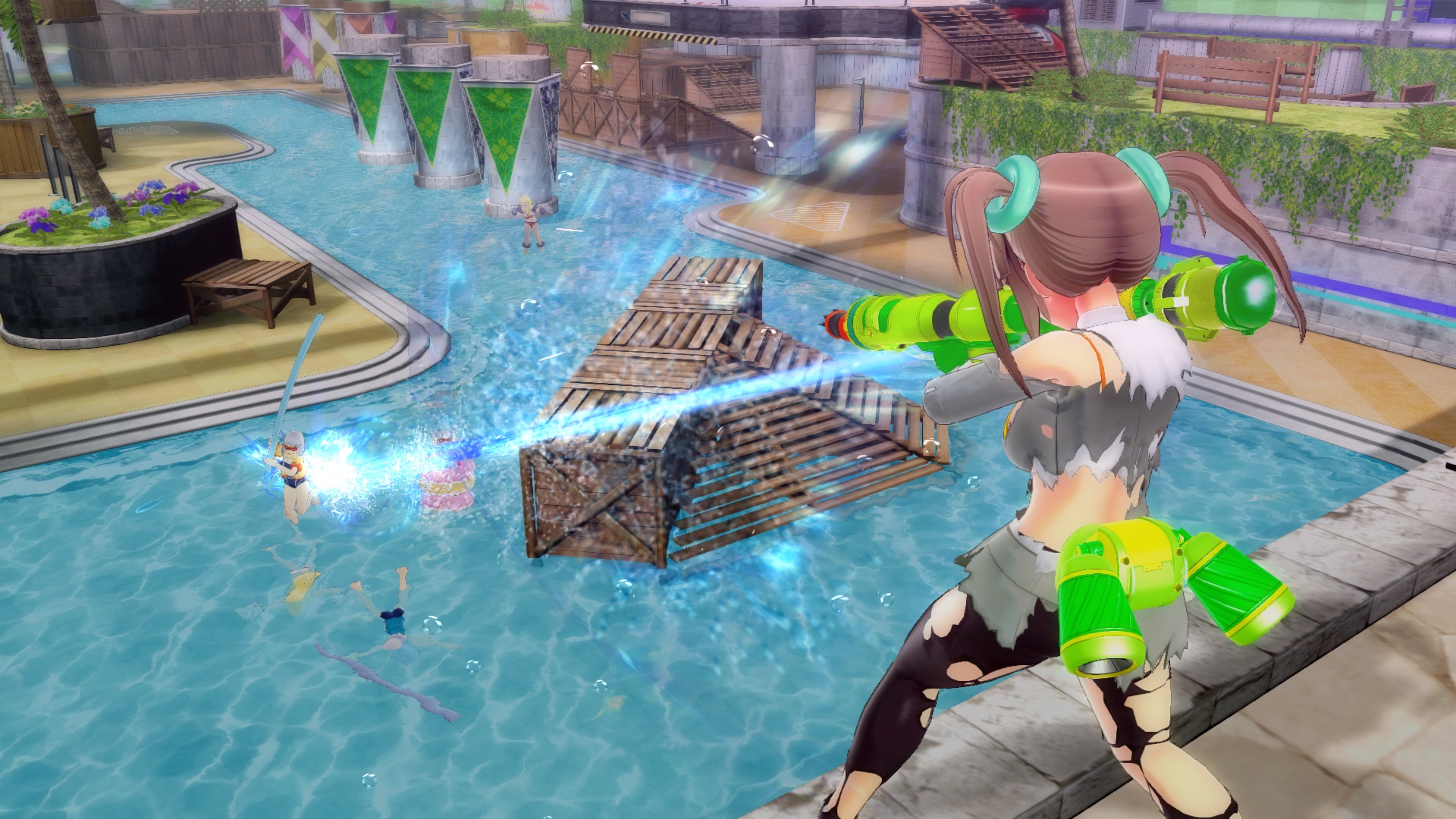 The latest Senran Kagura is sure to make a big splash with fans of the series. The change in gameplay still retains the fast & frenetic nature expected of an SK release, only now with water pistols, and theres tonnes of content to get through – one could even get lost just trying to collect all the cards. The short main story & handheld feel to mission structure, alongside a couple of performance woes, does put a bit of a dampener on proceedings tho. Still, the life & hometown will see you through these and there’s no denying the fun that can be had, as always, with a game in this series.