Mary Skelter: Nightmares is the latest title from developer Compile Heart to hit UK shores on September 22nd , The Dungeon crawler will be available on both PSVita and PSTV and published by Idea factory International. Is it actuallt a nightmare to play? lets find out 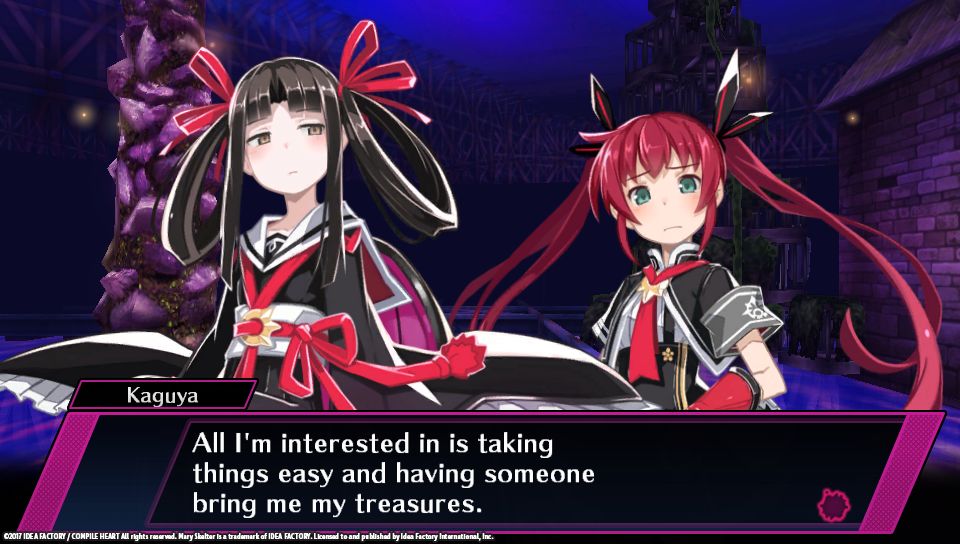 Mary Skelter sees you take on the role of Jack and the blood maidens to escape the living prison known simply as Jail. As the first blood youth it will be your job to protect the maidens and help them overcome the obstacles before them as you battle you way through the prison of nightmares. The game opens with Jack and childhood friend Alice, prisoners of the Jail Tortured, beaten and forced to endure bizarre acts such as licking walls. Red Riding Hood eventually turns up to save Alice, taking along Jack for the ride, beginning an adventure of unknowns and secrets.

Given what I had originally heard of the story, I have to admit to expecting a shallower story riddled with fan service. However, I was pleasantly surprised to quickly see this was not the case. The story is both well written and engaging, which also has some interesting tones while remaining informative and easy to follow. Ultimately, unlike most of the dungeon crawlers that have made it to the west however, this title has more in common with titles I have imported than the ones that I could go into a UK store and pick up, making it a little difficult to compare to anything specific. 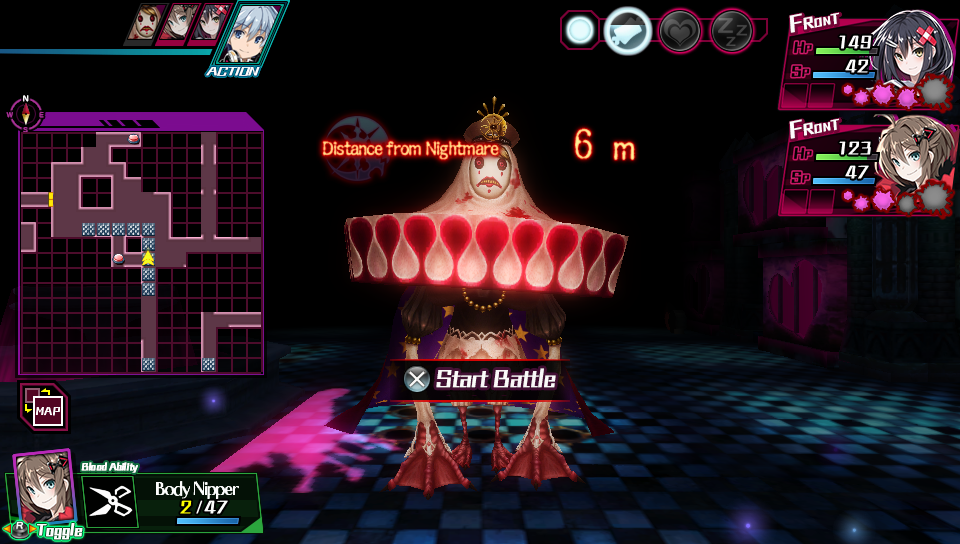 Game play for Mary is for the most part very typical of the genre. Exploration sees you explore dungeons in a first person perspective centered around a city hub and taking down each areas boss. That said, the game seems to take these elements a little further, such as the dungeon maps being more than simple bland tiles. Instead there are a number of objects such as pulsating hearts and coffins that burst open as you get close to them. The few additions outside the crawler norm really bring the world to life, as strolling through a dark ere cemetery only to have a coffin burst open in front of you is slightly unnerving the first few times.Another thing of note is the multiple gimmicks to exploration. While not entirely needed, Mary takes it past simple traps and pitfalls, having you traversing large gaps across chains while balancing yourself to ensure you do not fall. You can even bounce arrows around an area to clear obstacles, not to mention the secret passages and areas that require cutting or blowing up said obstacles. All of this is only for starters and makes exploration much more than simply strolling from A to B.

Mary’s battle system is similar, but not akin to moero chronicles, with the blood maidens making up the battle party – Using their powers and blood weapons to take down foes and Jack having no roll in combat in terms of damage dealing instead acting as a support roll. Jack however is still very much the main character, who’s skill set is possibly the most useful of any of the cast adding a deeper layer to the combat than simply spamming the attack command. Jack is unable to use blood weapons and as such uses his powers manage the girls skelter state, essentially berserk mode, that sees a huge rise in power but destructive to both friend and foe alike.Battles take place as random encounters as you explore the areas of the game but also if the nightmare, an immortal creature unique to each floor that actively hunts down the party, manages to catch you. Things play out in turn based combat that will see you making use of multiple strategies the game has to offer in order to succeed, once more adding a deeper layer to the typical dungeon crawler staples. Going into detail about all the options available to you would take some time, though in practicality its drip fed to you bit by bit as you progress, becoming second nature as you learn something new making it easy for players to grow accustom to with little to no effort. 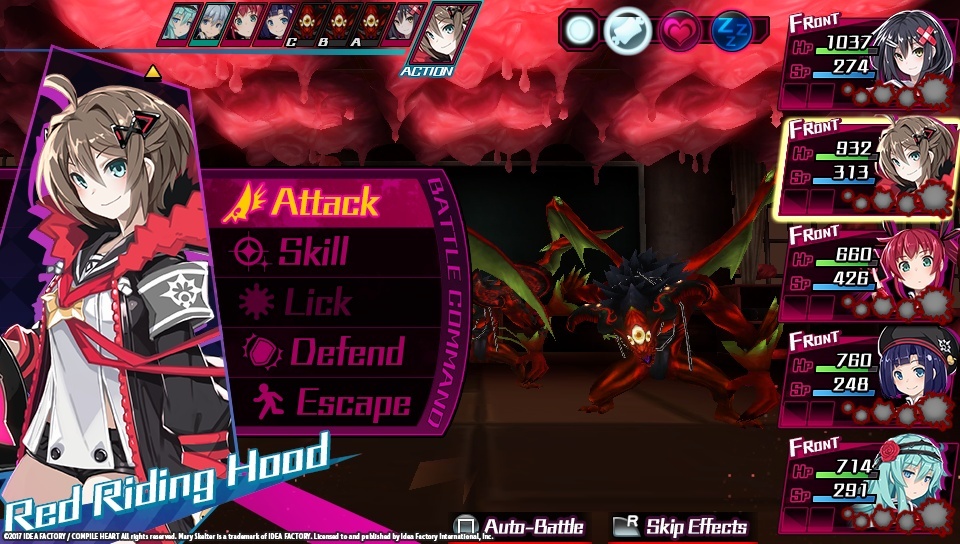 Graphically outside the improvements to the dungeon environments, Mary falls into the norm with the typical 2D character models for VN scenes – being wonderfully designed but offering little more to them than a handful of simple expressions. The 3D enemy models are also fairly typical of any dungeon crawler on the PSVita, even having some returning assets from other Compile Heart titles and quite often using the good old method of pallet swapping to create new foes for you to cut down. While there is little special to mention in this area, its the norm and widely accepted – meaning if you have played a dungeon crawler before you should be happy enough with whats on offer.

The audio for Mary is rather good from what I have experienced so far most notably the eeriness it adds to the graveyard area, along with the monstrous moans of the jail, really help to set the tone. Even the English voice acting is one that I was happy to sit through the title with. 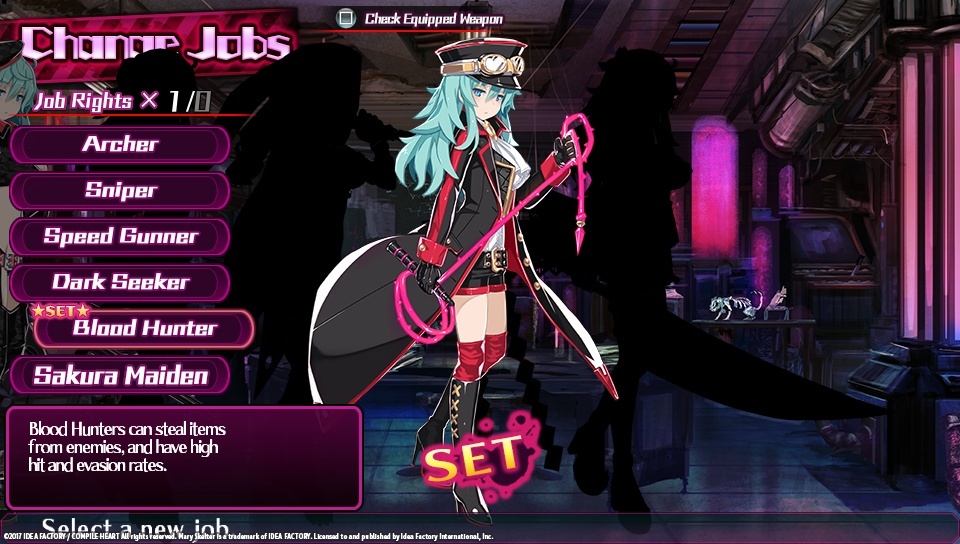 Overall I have to say Mary Skelter is one of the best dungeon crawlers to come out in the west on the PSVita, and though it falls into the norm in some areas, the extra variety it provides in others only enhances the experience. There are many areas I could not cover in this review such as the blood devolution system, Job systems, all the gimmicks of exploration and so on – but ultimately you’ll be better off experiencing them yourself if you’re a fan of a good crawler. You likely cant go wrong with picking up Mary Skelter as soon as possible on the PSVita.