Marvelous Europe have announced that Fate/EXTELLA The Umbral Star will be releasing on 20th January in Europe for the PS4 and PS Vita.  This action game set within the Fate universe will be getting an Moon Crux Edition that will be exclusive to Europe only.

The Moon Crux Edition will contain a 7.5” by 6.3” hardcover art book featuring over 100 pages of high-quality artwork and backstory from Fate/EXTELLA: The Umbral Star, a pack of sixteen collectable 3” by 5” cards depicting each of the game’s Servants, and a 24” by 17” cloth poster, all housed within a high quality collectable presentation box.  For once, European gamers are not missing out. 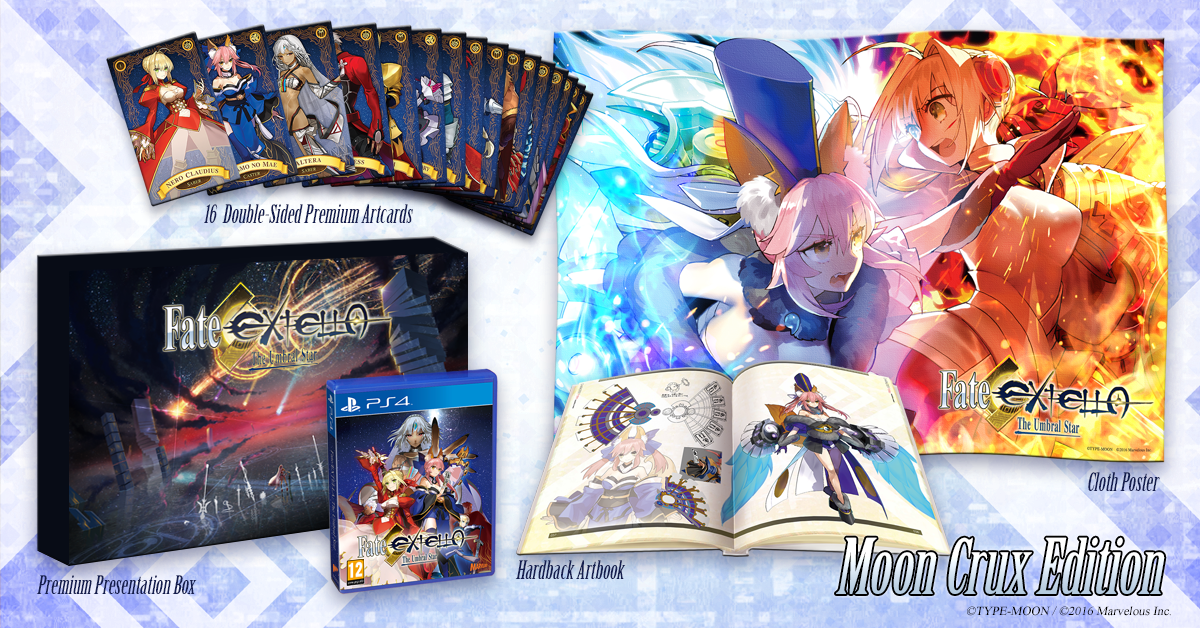 If you cannot wait for the 20th or if you are going digital this generation, you can pre-order the PS4 version right now!  Pre-orders will allow people to obtain the exclusive “Shackled Bride Outfit” DLC for Nero upon launch of the game for both platforms.

The digital PlayStation Vita game will not have a pre-order campaign, however, for the first two weeks upon launch the PlayStation®Store will feature a ‘Day One Edition’ bundle, which will include the standard Fate/EXTELLA: The Umbral Star game for PlayStation®Vita, alongside the exclusive DLC outfit “Cold-Blooded Warden” for Gilgamesh, once again, for both platforms.

Developed by Marvelous Inc. and expanding upon the extensive Fate universe with a story from acclaimed series writer Kinoko Nasu (of Fate/stay night fame), Fate/EXTELLA: The Umbral Star features a diverse cast of “Servants” – ancient warriors of legend and imagination, always at their Masters’ orders – who survived the Holy Grail War that took place on the Moon. In a future watched over by the all-powerful lunar super computer Moon Cell Automaton, these champions now battle for dominance over this digital realm, known as “SE.RA.PH.” This story takes place after the events described in Fate/EXTRA, and depicts the world after that previous Holy Grail War.

Check out the latest trailer below.