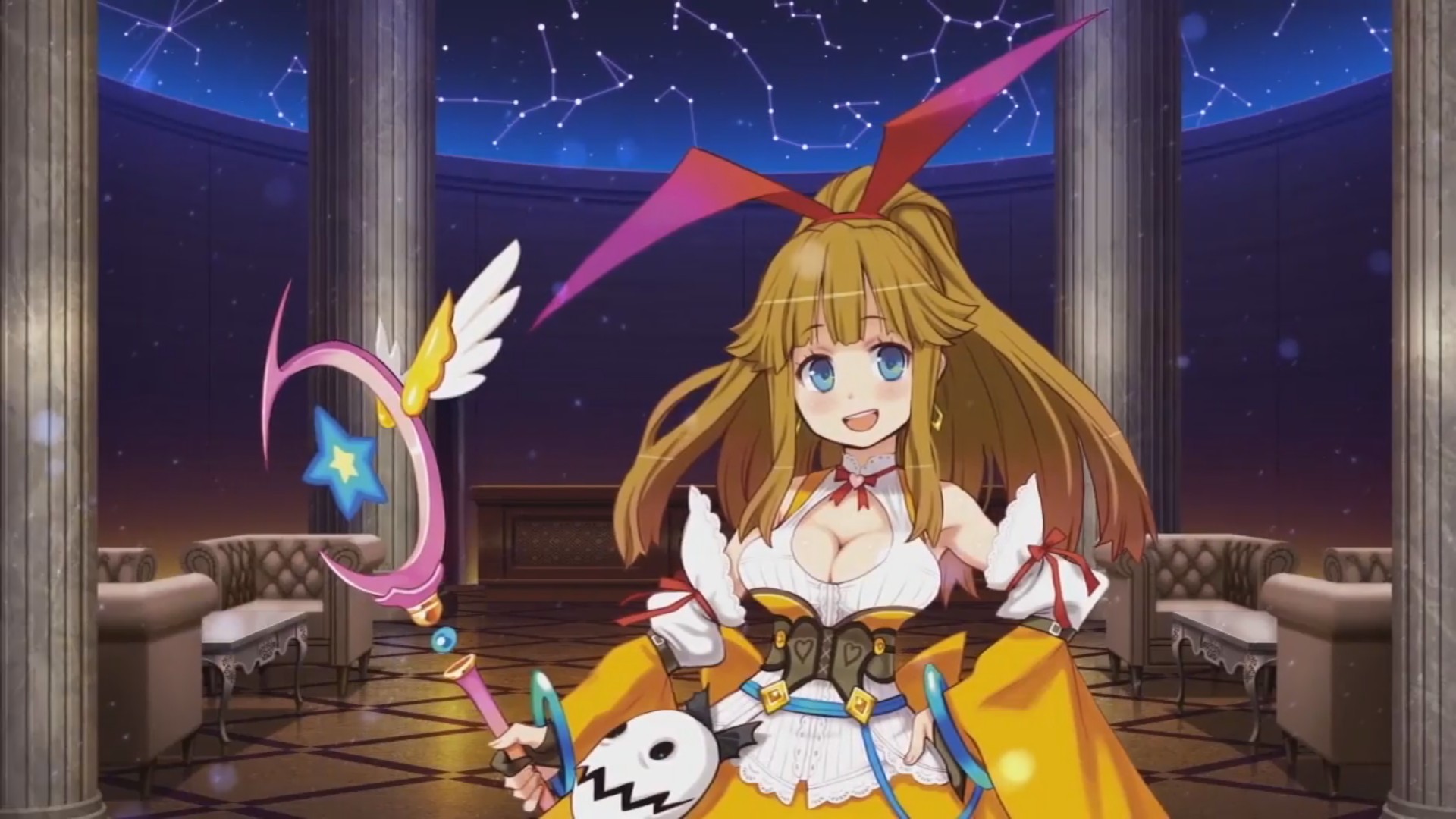 When MeiQ was offered to me to review I was excited, not because I wanted to play yet another Dungeon Crawler but because I thought any game banned in Germany and Australia has to have a good reason for it, was I wrong?

MeiQ: Labryrinth of Death is a new PS Vita IP released on 16th September in the EU from Idea Factory/Compile Heart, a developer most well known for the Hyperdimension Neptunia series so the expectations are suitably high, at least when it comes to story, humour and character dialogue.

This title tells the story of a world stuck in nighttime forever, where a fabled Machina Mage is the only one who can restore order to this broken world, with a Machina Mage being chosen from each of the areas of the world you play in and sent on a quest to prove themselves. The problem I had is that this potentially interesting story is mostly ignored after the initial setup, instead choosing to focus on the interaction between mostly interchangeable characters who I often found to be tedious at best and unbearable at worst, to add insult to injury, every girl somehow find the time while saving the world to comment on every possible thing going on around them. 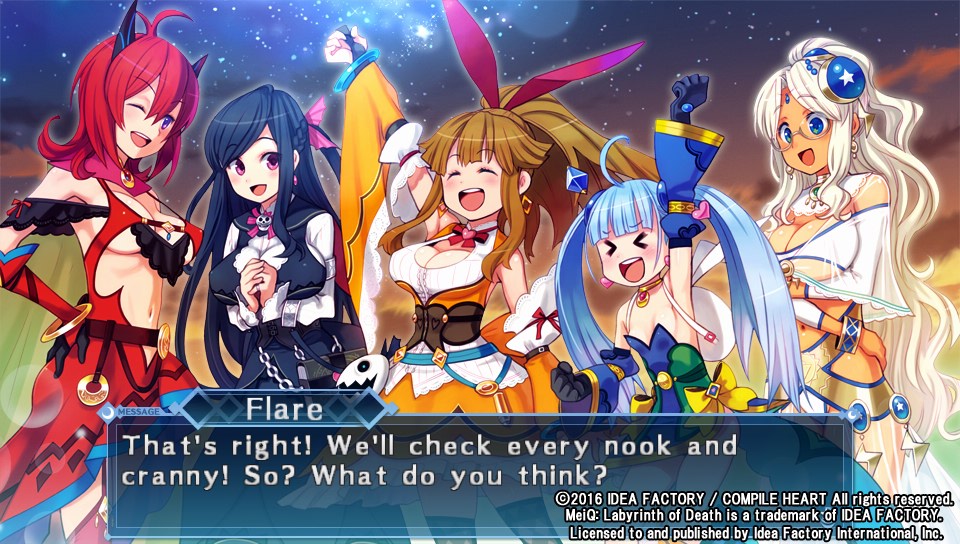 This would be a bit of a non-issue and a personal niggle if they were not all saying practically the same thing, they were filling out the main or back stories in some meaningful way or at the very least featured the trademark humour featured in Neptunia, but it just comes across as adding sound for the sake of keeping some interest going.

Speaking of cheap tricks to keep people interested, we move onto the reason the game is banned in Australia and Germany. During cut scenes, and there are a fair few of them over the space of the 30 hour or so “journey” you can jiggle the girls breasts, literally poking your Vita touchscreen to make them wave too and fro. I understand this is a feature that can be ignored and serves no practical purpose but for me once I had seen it I could not unsee it and when a particularly young looking character comes in it descends into just uncomfortable for me.

While this cheap trick did not appeal to me, I did find that in conversation cut-scenes and menus the 2D artwork is up to a pretty high standard with good (although a little cliche girl mage) costumes and character skins. The 3D graphics and dungeon areas are not rendered to the same high quality but it is far from offensive in any way, attack effects are acceptable and the audio overall is again up to the standard expected from these Developers if completely forgettable. 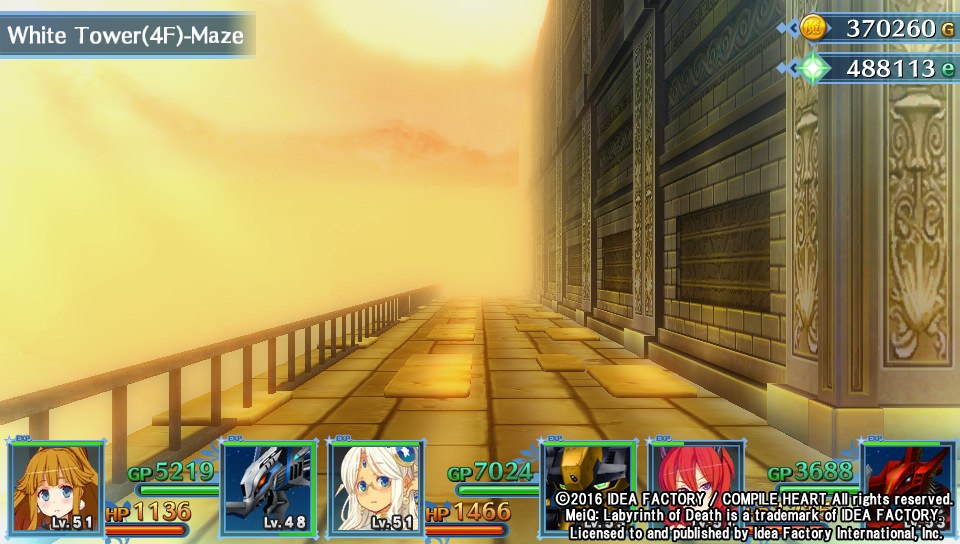 Onto game-play, and boy does MeiQ do its best to be mediocre on one hand, but also tries to do something great and different on the other. As a dungeon crawler you will of course spend most of your time running around and mapping out dungeons, and as I have reviewed a lot of dungeon crawlers of late I have come to expect a few certain elements from them, elements MeiQ missed by a mile. The game tries to encourage exploration rather than guiding a path through its 6 dungeons but because of unfocused and often scrappy level design this exploration becomes a bore barely before it becomes an active hindrance, dead ends & large rooms with absolutely nothing in them sap any of the usual fun from exploring, then you find out that you missed a hidden door randomly which could have contained an item to assist your team in a major way.

The other half of game-play is of course combat, where MeiQ does actually do something that only a handful of other titles do, your combat team is made up of 3 Mages and their protectors called Guardians, these robots are your front line members but on each turn you can either act with one member of each pair. Guardians have the bulk of your HP and are there to do core fighting and soak up damage, whereas your Mages are the only way to effectively heal and cast status ailments but due to their low HP pool are a risky proposition, one that grows in risk when you realise that if your main playable character falls in combat it is Game Over for everyone. This does attempt to create some sort of tactical setup but honestly it never really solidifies that. Of course as expected with titles like this you will spend a lot of time grinding for XP, collect parts for your Guardians and collect Seeds & Gems to build up your mages. The parts system for the Guardians was another area with high but poorly utilised potential, each Guardian has up-gradable and replaceable Bodies and Arms, as you unlock parts you can change these slots to change what attacks they have. 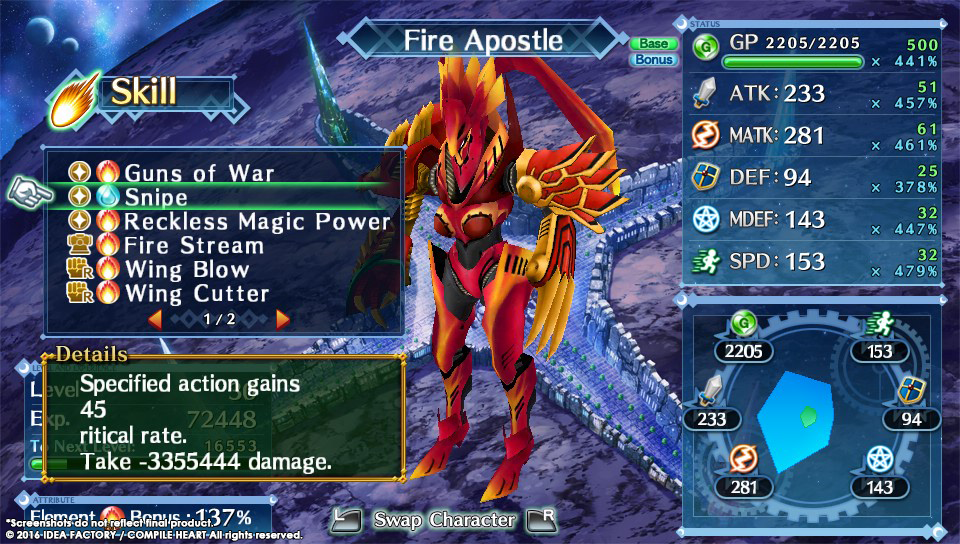 The trailer claims that there are over 2 million combinations for the Guardians but to be honest due to the poor utilisation I would guess that at least half of them are utterly useless because you are always guided towards the “right path” thanks to a horribly strict elemental system.

In the dungeon crawler genre it is not unusual to see titles attempt to too a lot and miss the mark, but it is fairly rare to see one miss that mark so widely as MeiQ: Labyrinth of Death. Most of the parts from level design to the underused story actively turn the player away and the stuff that is competent is barely enough to push you forward, I myself had much higher expectations and they were well and truly dashed.