As the Hyperdimension Neptunia series continues to grow in popularity, it was always inevitable we’d see releases on other platforms as Idea Factory International continues to bring the series to PC. Hyperdevotion Noire is the latest to be ported, following on from Hyperdimension Neptunia U, which offers up a different gameplay style to the rest of the series. A strategy RPG from Sting is in full force, with a new self-contained story featuring Noire as the protagonist. Has the game ported to PC well? and does it feature enough over the original PSVita release to persuade some to double-dip? Let’s see… 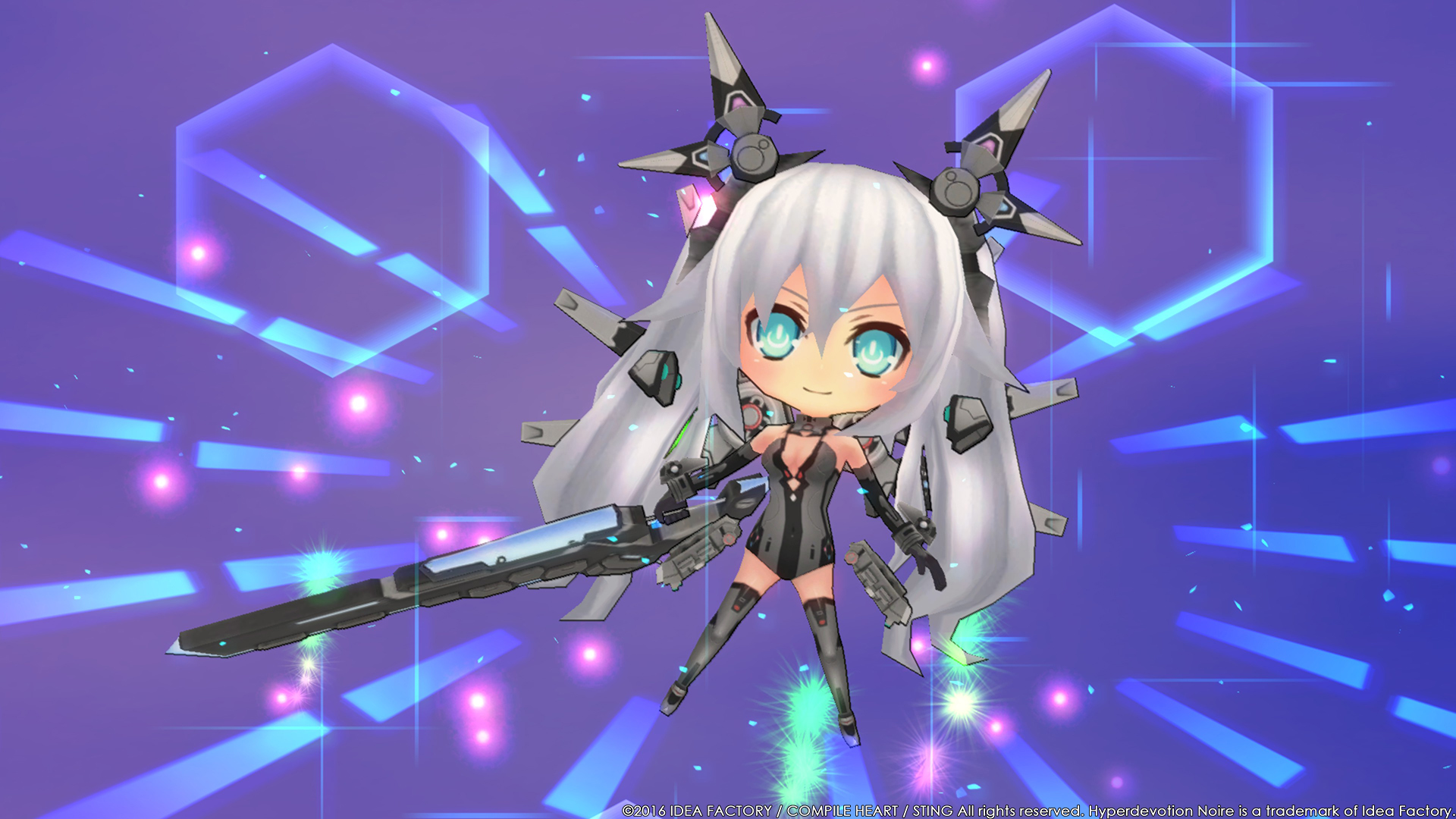 The story for Hyperdevotion opens up with  Noire as she is coming close to her goal of uniting all of Gamarket under her banner. It doesn’t take long for things to go wrong though! Arfoire manages to convince Noire that there is a way to end the struggle and unite the world without any more fighting. This turns out to be a bit of a ruse, as things then take a turn for the worse when the share crystals are taken and the CPU’s lose their power due to a lack of faith. Luckily your around to provide Noire with a little faith, as the story for this is played out from your perspective, and you eventually take on the role of Noire’s secretary (much to the ridicule of the other goddesses) With their power gone too, the nations empty and the generals, who were under the command of Noire beforehand, begin fighting for control amongst themselves.

The first couple of chapters are basically for party building, as the story doesn’t start to open up till after that & your journey properly begins. In truth, the story is a little weak compared to the main series. This isn’t helped by the abundance of dialogue compared to gameplay in the early stages and the fact that, to be frank, Noire just isn’t as interesting as the other CPU’s – which hurts the narrative overall. Some of the new cast are even thrown in to the mix with very little in the way of back story. There are a lot of newcomers though, with most seeming to slot into the universe as though they were always there, so it’s hardly surprising. It’s not uncommon though to see Noire being ‘upstaged’ by other CPU’s, and even some Generals, during the story. Noire fans will revel in what’s on offer no doubt, as Noire is at the center of all things and there’s plenty of screen time and fan-service moments for her. For those like myself (who aren’t really fans of Noire) you may find she lacks the spark & charisma of the usual protagonist to help ease the storyline along. 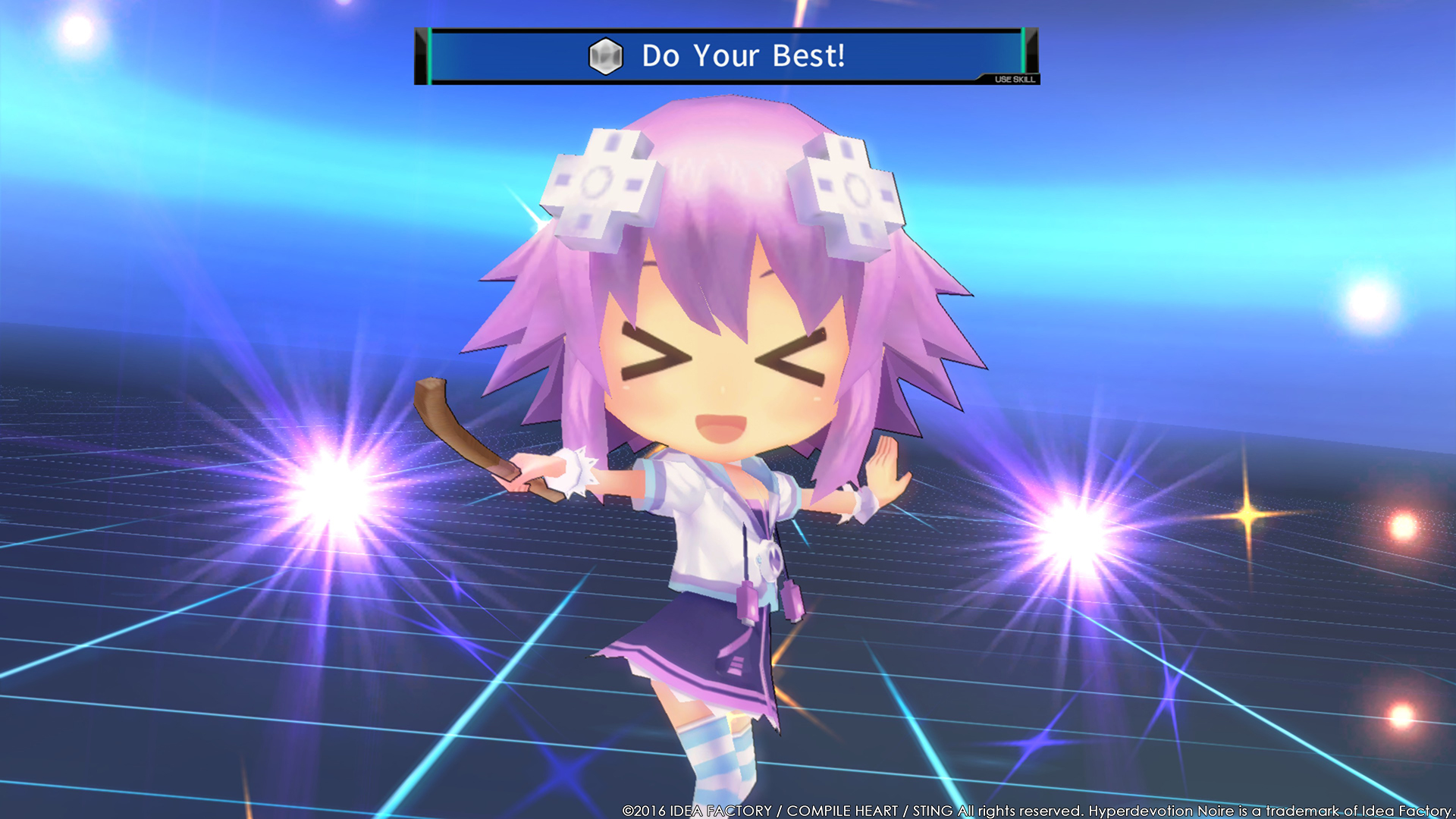 The games problems don’t just end at the story though unfortunately. As the game is chapter based with a few story stages making up a chapter, it’s not long till repetition begins to kick in. The story stages do pack some variety to them, but these are then rehashed constantly for most mission areas. The side missions are where you’ll spend your time grinding too, which is why repetition kicks in quickly, and it’s the only place to secure much-needed XP & items outside of story segments. Difficulty spikes can hit regularly too during story missions, and not being ready means you’ll be stuck in a loop till the battle is completed. Items don’t carry over to a restart unfortunately either, but any levelling up stays thankfully. A few tries will usually see you pass the more difficult missions.

Hyperdevotion also lacks the combo customisation etc of the main games due to a switch to a strategy format, but has the item development system plucked from the main series at least. This is great for Neptunia veterans as crafting items & weapons is exactly the same, but those coming from other series may find the lack of item/weapon upgrading within this system to be a little limiting. Aside from crafting with the items found during battles from foes & chests, there’s little else to do. The Basilcom has a feature that allows you to complete quests which unlocks new events to view, with you also able to decorate Noire’s Basilcom with points earned when completing tasks. Thankfully the game controls well regardless of the control method used. The turn based RPG nature of the gameplay doesn’t require fast inputs, so KB/M is just as useful as a controller. A controller is more comfortable and maps perfectly with a X360 pad, but the choice means it’s not a given and those with laptops on the go can enjoy the game without plugging anything extra into the system. 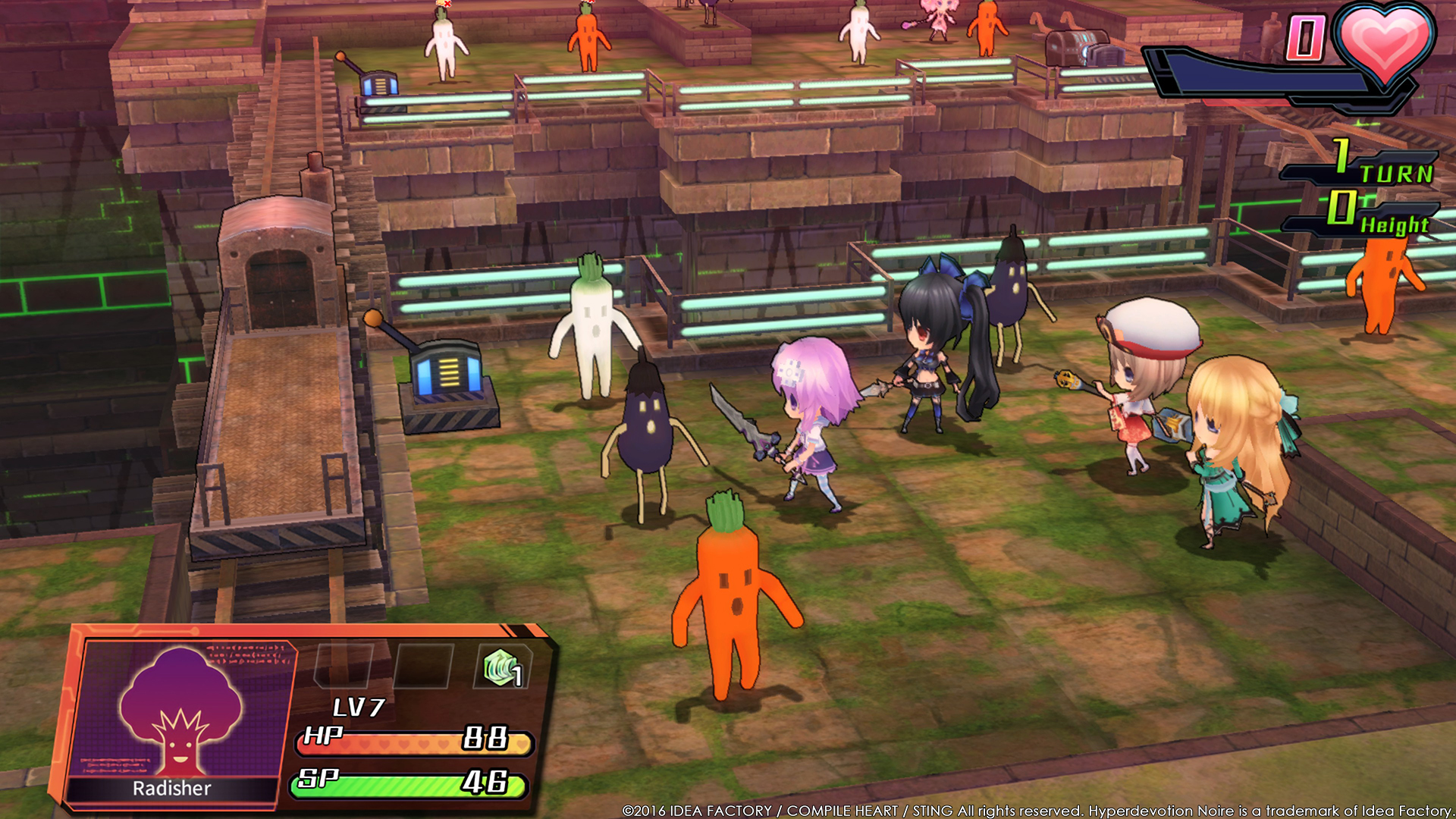 So now we get to the main point of the review, especially for those interested in buying again, of how the port fares on PC. Lets get the obvious stuff out-of-the-way. Anyone expecting a ‘remastering’ of sorts is going to be left disappointed. Very little has been done to the games models & textures considering the gulf in power possible over the handheld release, but there are a few additions at least. The most noticeable is an edge filter which gives the game a cel-shaded look. In some ways it helps the overall outlook of the game and is something I eventually decided to leave on. Others are enhanced shadows which gives proper shadows for characters instead of blobs, and what seems like a bog standard FXAA implementation to help smooth out those jagged edges. That’s your lot pretty much, resolution increase aside depending on your system.

Previous Vita ports from IFI haven’t been the best with regards to specs & performance ratio, but things seem to be getting gradually better. On my system (Core i5/8GB/GTX 660 ti) the game was silky smooth at 1080p, hardly surprising though given it’s above the recommended spec. It wasn’t till I gave the game a go on something more low end I was surprised. I installed Noire onto my trusty Fujitsu P702 laptop (Core i5/4GB/HD4000), which is made mostly for business use and is actually below spec, and found the game was at least playable. Granted, running at 1280×800 on the hardware meant it wasn’t buttery smooth, but luckily the turn based nature of the game meant drops below 30fps weren’t too detrimental. It’s not perfect, but you can at least have the portable experience of the game as on PSVita – It’s just a shame Steam cloud saves weren’t implemented to carry your save file between the PC & Laptop. We do at least get trading cards & achievements, but that’s pretty much a given these days for most releases on the platform. 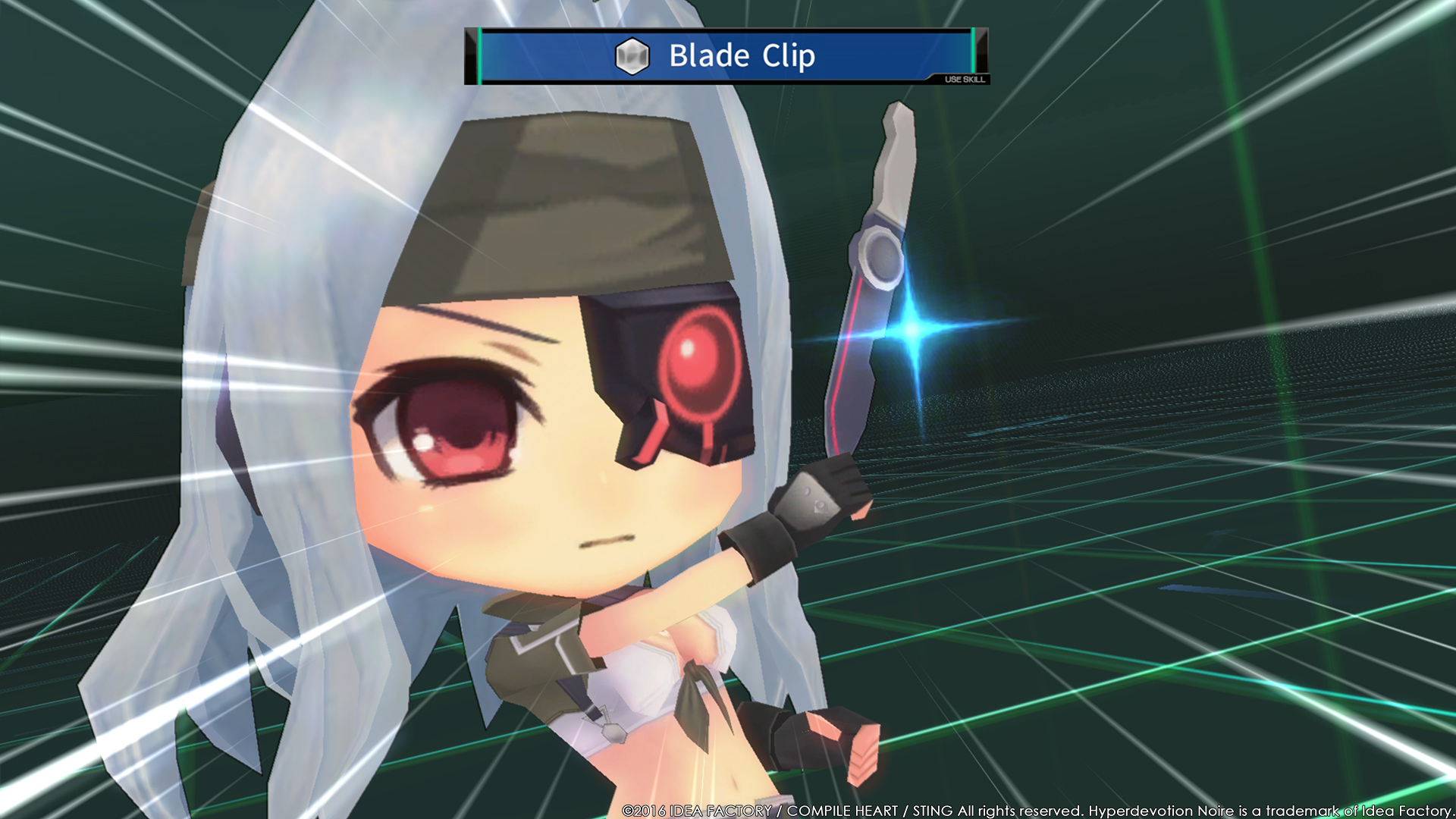 At first I was considering a reduced score for the game, given its barebones port to PC, but eventually settled on scoring it exactly the same. For all intents & purposes, it is the exact same game – with only minor enhancements on offer to separate it from its handheld brethren. The games performance on lower end hardware was a pleasant surprise though, and those coming in from the Rebirth releases may enjoy the new SRPG gameplay on this release. It’s a little lacking compared to the rest of the series, but it’s a decent enough spin-off for fans & newcomers to sink some hours in to.

As the game is pretty much a barebones PSVita port, some aspects of this review have been brought over from the previous PSVita review and updated accordingly.