Nitroplus Blasterz: Heroines Infinite Duel (and breathe) is the latest title developed by Examu who people may know from the hardcore 2D fighter Arcana Heart (also one Hello Kitty title on the NDS which we all know Jay is well into), published by Nitroplus famous for VN titles such as Fate/Zero & their mascot Super Sonico. Could this be the fighting game to push Street Fighter V down or is this just another misstep for the genre? Blast on to find out!.

First off i’ll admit I have no idea who the majority of the roster available is, I don’t really enjoy VN games and certainly haven’t played any by Nitro+, I do however know Homura from Senran Kagura, Super Sonico, Aino Heart & Akane Tsunemori from both writing for this site and actually watching Psycho Pass. Speaking frankly the roster I actually found quite off putting for someone who isn’t versed with Nitro+ VN especially when I hit the support character roster. Fortunately not only does the game aid you in who to pick as support but the main characters all seem to play like familiar Fighting Game Archetypes. My initial play through was with Saber from the Fate/Zero series, despite bulky armor and wielding a sword all her inputs were the same as a shoto character (think Ryu from SFV). The controls offer you a plethora of options both offensive and defense are covered, you have heavy attack which pushes your enemy back, escape action which helps you dodge incoming attacks, you also have moves which interrupt attacks ala combo breaker and the industry standard super combo attacks known in this as Infinite Blaze.

The game controls as well as you’d expect from one of this genre, I did find that the characters felt a little too weighty compared to other games and felt like my moves weren’t quite getting the inputs I was putting in, the pacing of the matches also seemed to be slower than what I was expecting after seeing titles like Blazblue, Guilty Gear & UNIEL. Visually the game is a mixed bag, the 2D sprite assets are gorgeous to look at and animate fluidly in battle, the only drawback is they show off how lazy the backgrounds look. Bland 2D stages with little to no animations which in this day and age is quite the sin, especially with the lush stages found in Blazblue.

The game features many modes which will more than suit those who enjoy both online and offline play (Looking at you SFV!) and should keep you busy well into the 30 hour mark which is certainly bang for your buck in regards to fighting games. First off you have the standard Story, Practise, Online modes. Story sees you take any of the roster through 10 battles, there are several scenes in which the characters interact with each other giving this mode a little more charm than your average mode, Practise is self explanatory and will be your first port of call before hitting online to make sure you nail your combos and support actions & finally Online mode which as you guessed it takes you all over the world battling other players. The game also features additional modes such as Score Attack in which you fight to get the best score you can buy fighting efficiently ala Survival Mode, Gallery mode where any of the unlocked additional content can be viewed for any Nitro+ enthusiast and then we come across the curious Another Story mode. Much like Arcana Heart 3 Love Max!!!!! Examu have created an additional mode for post story which acts out in Visual Novel form, I quickly went through this mode and though well written it didn’t particularly hold my interest well, especially as that all but 1 of the stories was half an hour of text with 1 fight, i’m sure those more well up on the series would find it more engaging than I did but especially without any branching dialogue or choices I became quite bored and longed to go back to battle. 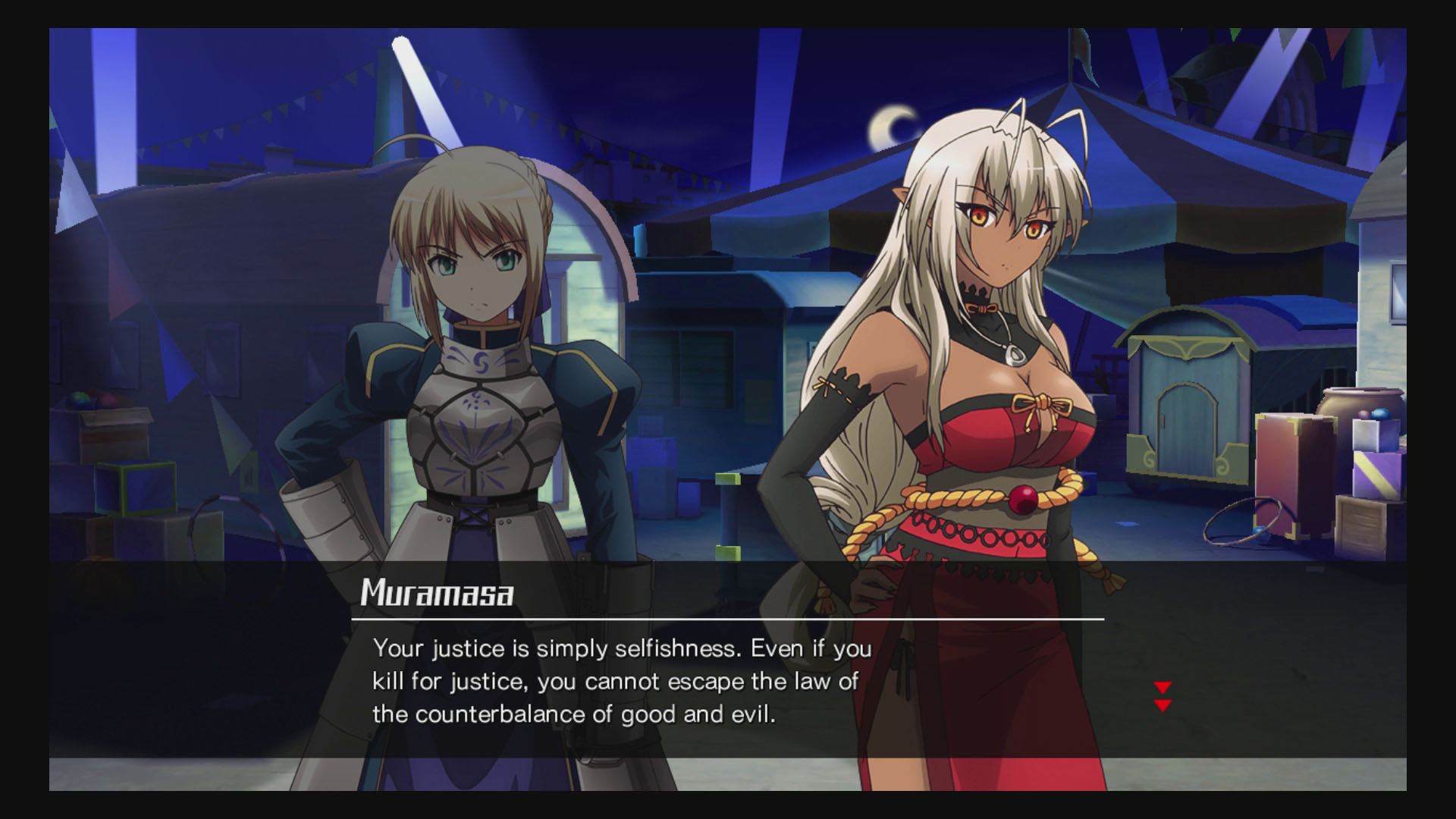 Nitroplus Blasterz is an interesting title, on my initial impression I didn’t actually think too much of the title, but once I had sat down and played it for a while I found the core fighting game quite interesting and often intense at higher levels. The game plays smooth enough despite the weighty feel and seemingly laggy input, but once you adjust to it you’ll find yourself enjoying the title alot – I do think the fanservice of the title is quite damaging to it as it can come off quite intense when you go in not having a clue who or what anything is. Another Story is great for fleshing out the characters and the story but isn’t engaging enough for me to suggest going through, the core Story mode is good enough and when you find someone to play against online and the netcode holds up you’ll be in for quite the treat. Hopefully the unfortunate timing of being released around Killer Instinct Season 3, MK XL & Street Fighter V doesn’t kill this title off as I would love to see it gain a following for more online matches & a follow up, but please just leave the VN section out next time!!.