It’s that time of the year again. Following on from last years 3DS release of Senran Kagura 2: Deep Crimson in the west, we now have ourselves the series first console offering on our shores. The series has been on the big screen previously if you played Bon Appetit & Shinovi Versus on PSTV like I did, but this is going to no doubt be a little different with a fully fledged console release on offer. Does Senran Kagura succeed or falter during the transition? Lets have a gander. 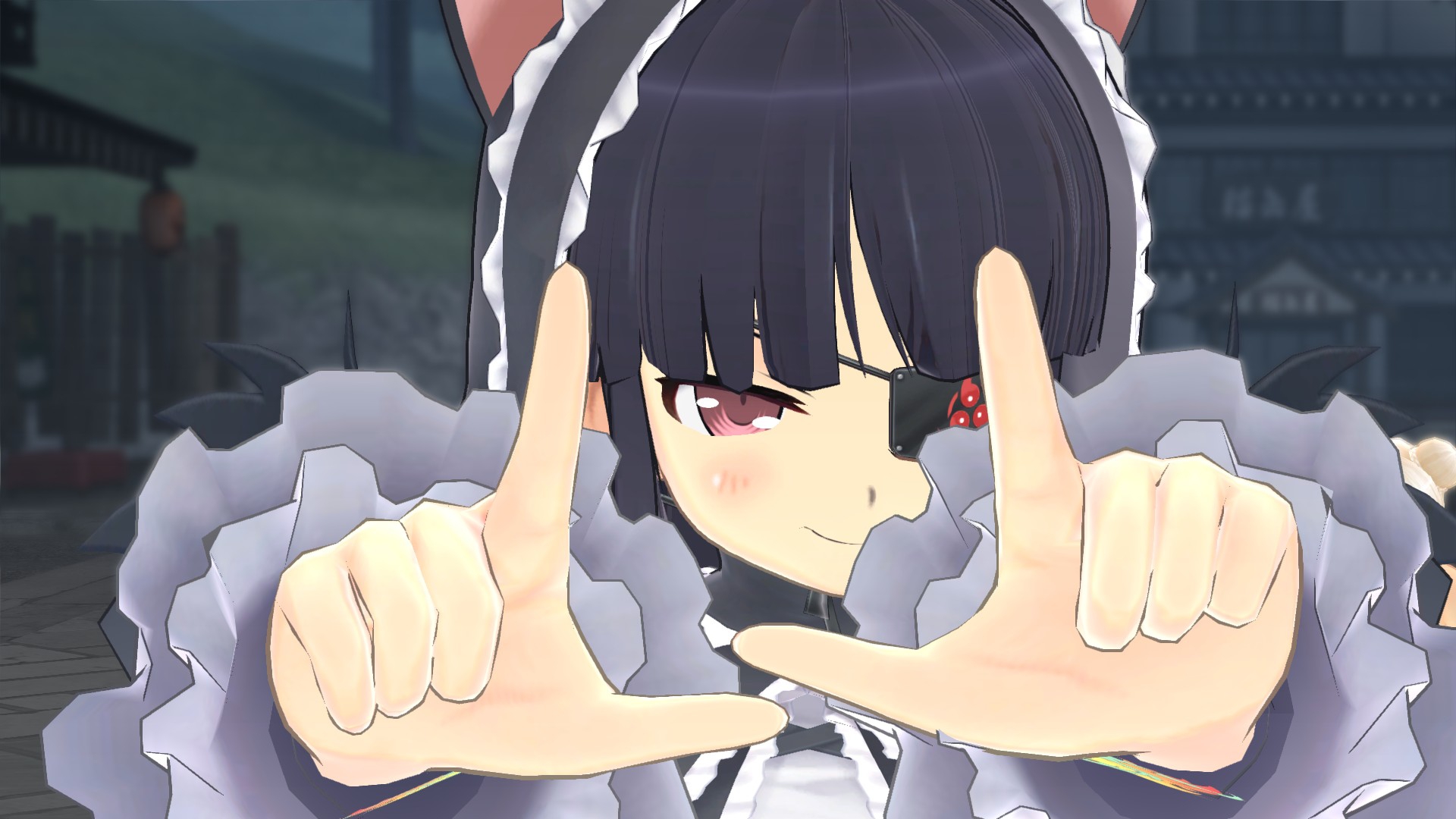 The main draw for the games single-player is the Festival story mode. This finds the girls from all 4 of the main Shinobi schools introduced so far being warped away to a secluded island by Asuka’s grandma to partake in a Shinobi Dom Dance. Plenty of missions provide enough opportunities for the large roster to get enough time in the spotlight. The story unfolds in the usual Senran, Fully animated 3D characters deliver their lines in a visual novel way, with the odd fully animated cutscene thrown in to spice things up. As you would expect, the game’s story is pretty much tongue-in-cheek for the most part as there isn’t too many of those serious montages we find in previous releases. Fans will definitely enjoy the many references to event’s in previous releases, with each character being just as expected.

There’s plenty to do outside of the main Festival story mode too, as straying from the beaten path and exploring the levels to find shrines to destroy will net you bonuses. These mainly come in the form of individual character story missions that can offer more of an insight into each one, as well as extra goodies such as costumes for purchasing in the store. The store will be your port of call when not in missions as it allows you to spend your hard-earned cash on items or partake in the lottery to randomly receive some special lingerie. It’s a little saddening to find the game lacking any Co-op or PvE modes for online play, but on Ps4 at least there is offered the possibility of 5v5 PvP Shinobi bouts. These play better than expected, and from the few I tried, seem to perform well too. The lack of a co-op mode is a huge oversight though considering how well it was received by the fanbase when announced for Senran Kagura 2, there’s no local co-op either, which will disappoint those that enjoyed it on 3DS. 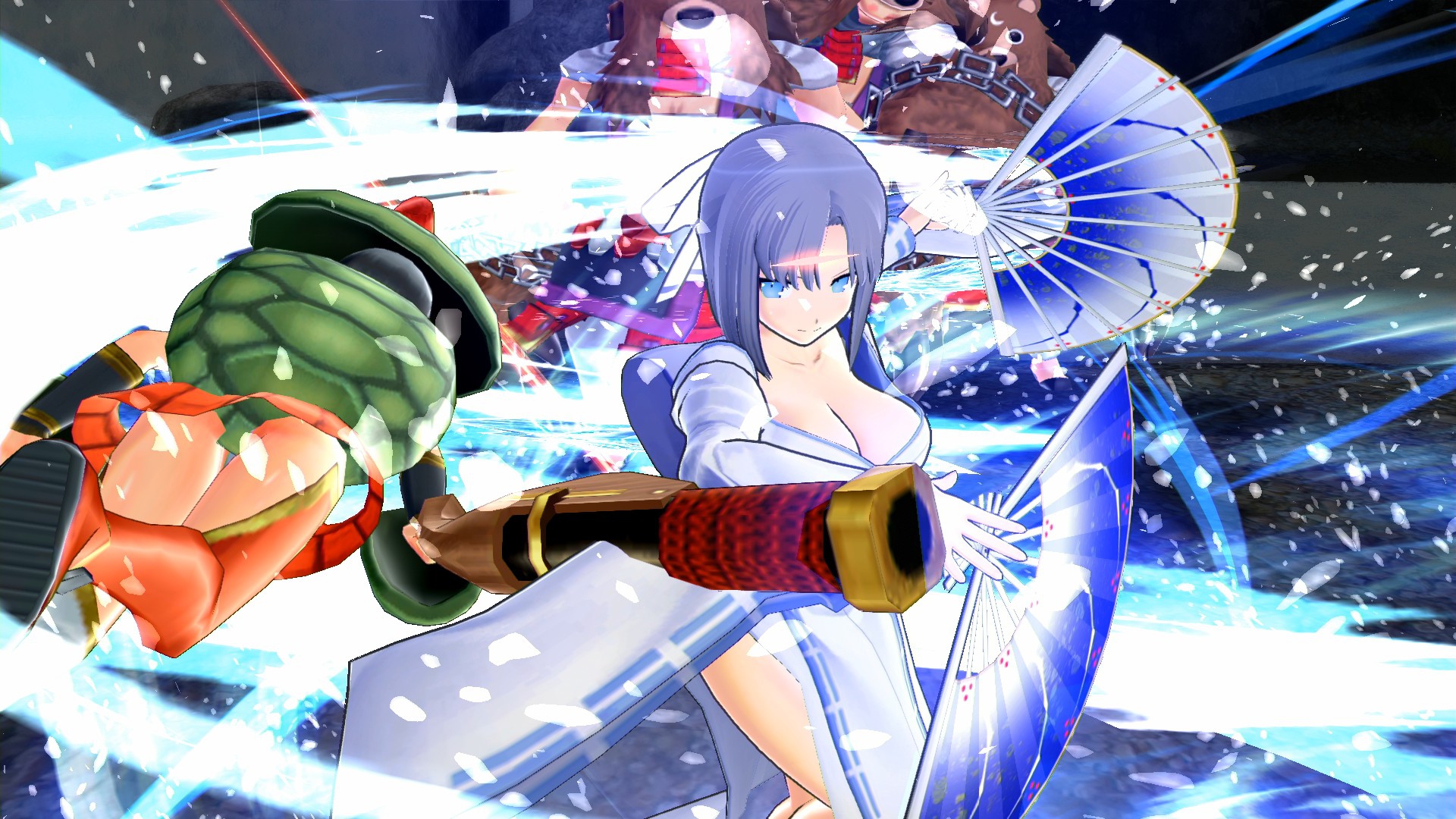 The best way to describe the gameplay for Estival Versus would be Shinovi Versus on steroids. On Ps4 at least, you often find yourself up against at least a few dozen shinobi which can make for a challenge on high difficulty. There are some additions to the gameplay which make use of the touchpad in combat, such as activating Fury mode or calling in a partner when available to help out in tricky situations, but otherwise the game is a refinement of what has come before more than anything. The gameplay is almost identical for the most part, just now a little more slick. Considering I regard Shinovi Versus to be the weakest, it’s a surprise to find Estival Versus to be the best iteration of the series yet. The expanded stages to incorporate a little exploration are a nice touch too as they help break up the constant onslaught of enemies that could otherwise leave one fatigued from constant battle. Granted, if you’ve never got on with the series before the lack of a gameplay revamp won’t sway you -but fans will certainly be pleased at the refinements to the formula for the console release.

This is usually where one would start waxing lyrical on pearl clutching or championing artistic freedom for developers over the games fan-service, but I’m not going to. There’s really no need is there? Its Senran Kagura. Folk know exactly what they’re getting with this package. I will make note of the somewhat odd addition of a Costume Break toggle though. Disabling it doesn’t make the bewbs rigid or stop the skirts fluttering, if anything it removes a visual indicator for your character’s health that will otherwise have your attention diverted away from the action to check a character’s health regularly – so it doesn’t make the game instantly tolerable for those with a loathing of life & hometown. 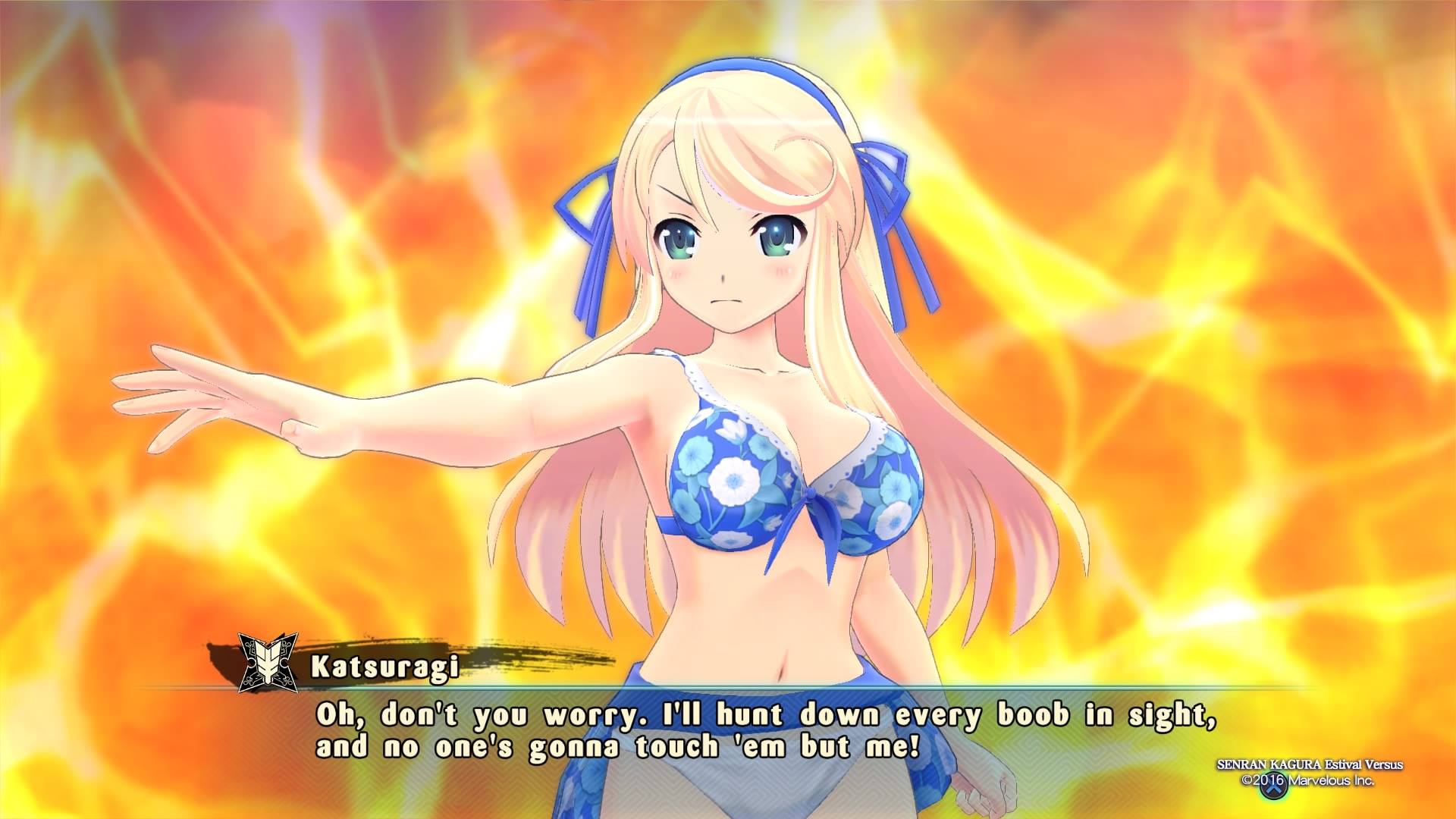 It’s no surprise to find Estival Versus on Playstation 4 being the most graphically accomplished release in the series so far. The bump up to 1080p60fps over previous releases means detail & performance is on a whole other level. Sure the PSVita release looks good too, but it just can’t touch the presentation on Sony’s console. Characters & stages are bold and bright, with many stages from previous releases seeing a welcomed detail boost to bring them in line with new stages. The huge boost in resolution doesn’t hinder the assets too much either and really help one appreciate the individuality within the game huge roster.

There are a couple of nuances though. Sometimes a few assets will crop up that look positively handheld. It’s no surprise given the series roots, but the 1080p resolution makes it a little more obvious. The 60fps isn’t 100% rock solid either. Although performance is vastly improved and much smoother than the handheld releases, alpha effects tend to cause some stutter. Fire seems to be the biggest culprit, but considering it’s not a constant within the game, your mileage on the stutter will vary depending on your play style.

Another mainline Senran Kagura release, another 8/10. One could say the series is consistently great, others that it’s stuck in a rut and in need of change soon – to be honest both are true. Estival Versus does make the transition to console well, with the 1080p60 presentation offering both smooth & colourful visuals and slick performance with regards to gameplay – but the lack of a co-op mission mode is a huge omission though. The slickest entry in the series will delight both fans & newcomers alike with plenty to unlock and play through, if you can take your eyes off the boobs that is.