This has to be the most pointless and most stupid game I have yet to play. I have played a lot of indie games but this one just takes the biscuit! I have managed to avoid this game through all its ports but I finally jumped on board the band wagon when it was released on the PS4. This game is a prime example of Youtube bait. A game (dare I say) that has one purpose in life, to create entertaining videos for viewers to watch. It does that very very well but as a game, well it is just pathetic. 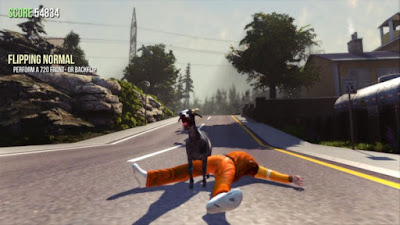 Controlling your new goat friend is very simple and some what responsive. A lot of Youtube bait games go for stupid controls, thus making it impossible to play but Goat Simulator decided to go in a different direction. Your main objective in the game is to rack up as many points by causing as much chaos as possible. To help you achieve your high score there are objective to complete. This will include blowing up the petrol station like Michael Bay or just getting as high as possible but all in all there are pretty dumb. It feels like when the developers were working out what the objectives should be they pretty much threw every single idea onto a white board with the coders saying, “Yea, we can do that – it will be fun”. Games are meant to be fun, I agree with that but Goat Simulator is just plain stupid. 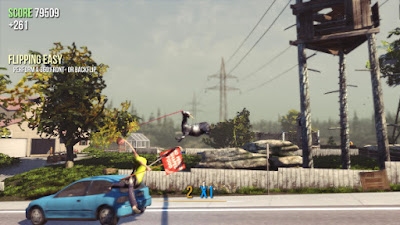 Goat Simulator is not a game you can invest a lot of hours into. I could not manage more that 10 minutes a sitting until I became very bored of it. There are a few secrets around the little sandbox but they will take you a few hours to explore and discover but apart from that, there is not a lot to do in this title other than cause the same chaos each time you load it up. The outcomes may differ slightly but the original act will always be the same. You will get a giggle or two as you fire off into the air with a human stuck to your tongue. Seeing yourself stuck in a fence whilst the camera goes insane may make you chuckle. It is full of cheap laughs but then you step back and look at the cheap laughs you find suddenly become aware that the glitches are ones that would drive you insane if they were in a real game. 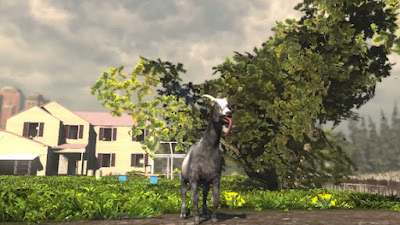 Goat Simulator is an experience. As a game it really does not offer that much. Once you strip away the collectables and half assed objectives, you are just left with a very glitchy physics engine. This is the biggest issue of the game. It really does not hide that fact that it started life out as an in house engine. Instead of developing using this engine, Coffee Stain decided just to bolt features in a short time (4 weeks) & sell it to gamers, who at this point may have been sick of mainstream games and wanted something “different”. 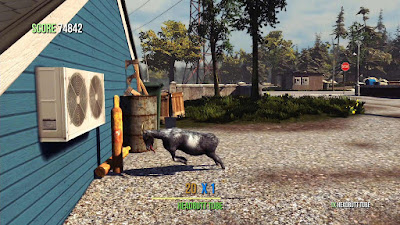 I give credit to the developer as they have managed to make a market from a purposely broken game but I think the joke has gone too far. If this was their aim at the start, congratulation to Coffee Stain, they have achieved their personal goal but for me it is just too much. I enjoy games that are different from the rest but Goat Simulator is just not my cup of tea. I will praise games that change the formula, whether it is in the story or gameplay but this is just silly on all fronts and does not really contribute to the gaming world. Yes it is great that developers are finally listening to gamers and delivering exactly what they want but if this is the end result of that, it is a world I do not want to participate in. The most disappointing thing about this “situation” is that there are far better indie games out there but gamers will turn their noses up because it is “another Indie” but they all jump onto this game because “gamers” like PewDiePie made it famous (seriously over 12 Million people have watched him play it!)

All that being said, Goat Simulator is a silly game full of cheap laughs. You may find it to amuse you in brief sessions and it maybe a lot of fun with friends but I cannot see a sequel anytime soon (hopefully).

Who Should Play This?

Who Should NOT Play This?