Onechanbara, for those not familiar with the series can be summed up with it’s Wii release title “Bikini Zombie Slayers”. It’s B Movie in game form, possessing a cult status with it’s fans the series has seen a somewhat spotty release in it’s history. Fortunately XSEED & NIS have brought over the latest in the series Onechanbara ZII Chaos. The name is just a little random but perfectly suited for the nature of this series. 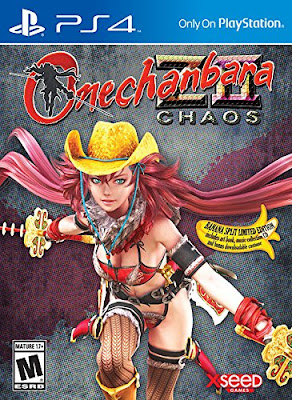 Will this be the first B Movie treat for the PS4 or is it another video nasty?

ZII Chaos follows on from the events set up in Onechanbara: Kagura which unfortunately never left Japan, luckily the events are explained in the intro but with it’s production values you’ll find yourself drifting in and out of interest straight away with this narrative. It’s all about ancient Vampire slaying clans, dark evil stuff and ancient curses with a sprinkle of well endowed Zombie Slaying, Bikini clad females.

From my understanding the story is just an excuse to get the 2 new girls Saaya & Kagura on the side of Aya & Saki which is a stroke of genius scriptwise, the sisters are mortal enemies of each other and this new threat causes them to team up, standard buddy cop material. What makes this shine is what helps every good “Buddy Cop” film, the interaction between them. The comedy moments between the sisters really shines through the game and my stand out favourite line is when Saki told Saaya to “Stop dragging your tits” in regards to tip toeing around subjects. 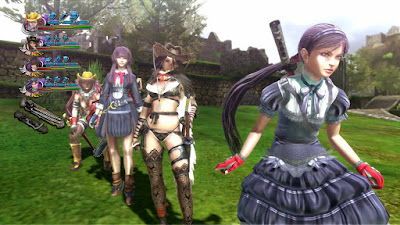 The game also brings back Anna from the Xbox 360 version of the game as an adviser to the girls throughout this world spanning adventure, it does reference Kagura somewhat and is quick to point out that they have already been to a place or killed a monster before which will be lost on most due to that game not being localized.

The voice acting is actually quite strong in this title and really brings out the better part of the script with the girls. The intro music is J-pop sweetness but the in game tracks generally tend to sound more like elevator music. Overall aurally it’s passable, it won’t be winning any awards and certainly isn’t MGS 4 Blu-ray busting sound quality but it’ll suffice for this B Movie game. 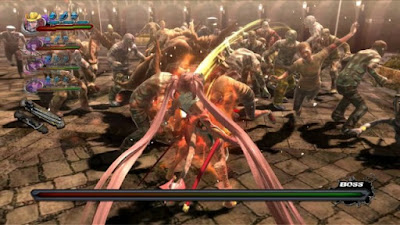 Graphically Onechanbara is a far cry from what you’d expect from PlayStation 4, to be quite honest visually it’s late PS2 with extra shine. The budget seems like has gone totally on the girls character models as the levels, enemies and visual effects all seem muddy, washed out and from 2 Gen ago while the girls all have a vivid visual flare.

The levels vary throughout the game but for the first hour or so you are in a castle and after the surrounding village. Once that is done you are given the option to choose your next destination from several locals including Peru and Japan. While some of the locations are quite nice, Peru and Dubai are eye sores and empty, it is truly a mixed bag in regards to the level visuals throughout.

Enemy character models are acceptable for zombies, you get your basic pedestrian zombie, stronger shield wielding zombie and even one equipped with a chain gun, other enemies include Shark Moles?, Gargoyles and Generic flying creature #2. The bosses in the game are fortunately a little more inspired ranging from a Jabberwocky to a pair of Bikini Human Slayers, another of interest was a giant monster who during the battle you cut pieces off until you are chasing his head around the stage. 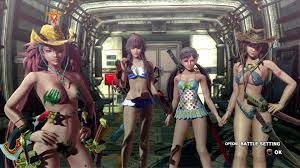 Onechanbara plays in the style of a 3D beat ’em up, think 3D Streets of Rage or Final Fight or even better a lower budget Lollipop Chainsaw. Good news for people who have played Lollipop is that this games combat is much smoother with a tonne more depth. The first instinct with this is to go in all guns blazing and button mash, as in previous titles of the series there is a natural rhythm with every combo string, you nail this you get more points, hit harder and generally run through the chaos. You have combat dodge to help avoid the attacks which is helpful but I noticed a lot of the time you won’t even see half the attacks coming. You have a combat dash in which you knock enemies into the air and continue the assault at high speeds, insanely helpful and quite vibrant to boot. Over time you can summon the other 3 inactive girls to join the fight and help rack up some massive combos, this is where the game gets truly hectic and i’m happy to say the frame-rate for me only dropped once or twice during my playthrough. Two of the girls have the ability to transform to a much more powerful state but seem to take more damage so it’s a double edged sword, they can also absorb blood to regain health which the other 2 girls can’t do and they have to rely on items collected to health up.

Outside of the main campaign which sits at around 3 to 4 hours you also have Mission Mode which is a serious time sink, these can range from survival to kill X amount of zombie in X way. These are great to attune you to the game especially in the tougher difficulties, the game ranks you after every mission or campaign segment so there is always a drive to further that score and get the high marks. To help you do this you can customize your girls by buying accessories, weapons and new clothes from the store using the in game currency dropped by everything you kill or destroy in the game. This adds some serious playtime as you work through getting all those V rankings and unlocking everything in the game via the store. 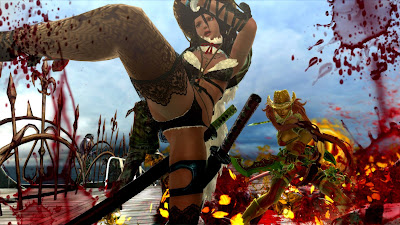 Unfortunately not everything is smooth sailing, despite the game playing smooth it’s riddled with graphical and game breaking glitches. Clothes clip through the girls and the camera just goes off wherever it’s heart takes it. Throughout the game you’ll be barred into small arenas to fend off the zombie horde, this would be fine if the horde didn’t have the tendency to appear on the other side of the fence often out of reach forcing restart and killing your momentum. Final example is that especially on the higher difficulties some enemies have moves which stun you, the A.I repeatedly spams this until death, usually this isn’t an issue as you’d swap the girl out but one boss in particular went through all the girls in a matter of seconds doing this.

Overall Onechanbara has always been very Marmite in that you’ll love or hate it, it maintains cult status and does so by making small changes while still appeasing the fan base, such is the case here that if you are already invested in the series you’ll enjoy the title. Newcomers should approach which caution and at the right place, it’s a pleasing B Movie title but lacking polish, has a tendency to fight you in terms of camera and glitches and mileage varies with how much fun you have taking down zombie hordes in a beat em up style. As with all B Movie cheese it’s works if you find it for the right price, a fun few hours but you may remember the game for the wrong reasons if it stays with you at all, Onechanbara ZII Chaos scores……

Who Should Play This