News
Dispatch Games has announced a localisation of City Connection’s Penguin Wars. Originally released digitally in Japan during September, the game will now see a release for the PlayStation
Read More 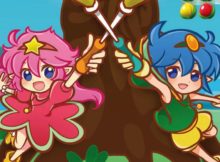