JCB Pioneer: Mars is the latest title to try and take some of the Survival genre money, placing it’s space boots much firmer in reality than most will it be the leader of the space race or not even make pole position? Read on to find out.

The team at Atomicon obviously have lofty goals when they decided to partner with JCB to put everyone’s favourite construction vehicles on the Red Planet. At some point along the line they decided to really “sim” this title up and throw in some hardcore survival aspects and a smidge of the story to see how this mix tasted.

Putting you in the boots of a colonist who has the task to colonize Mars, you’re soon thrown to the planet’s surface in a rougher than expect arrival. Within the opening hour you’re introduced the rough terrain of the planet, your trusty JCB and your mini colony, then you are set free into the wilds of Mars to try and make the planet somewhere to live. 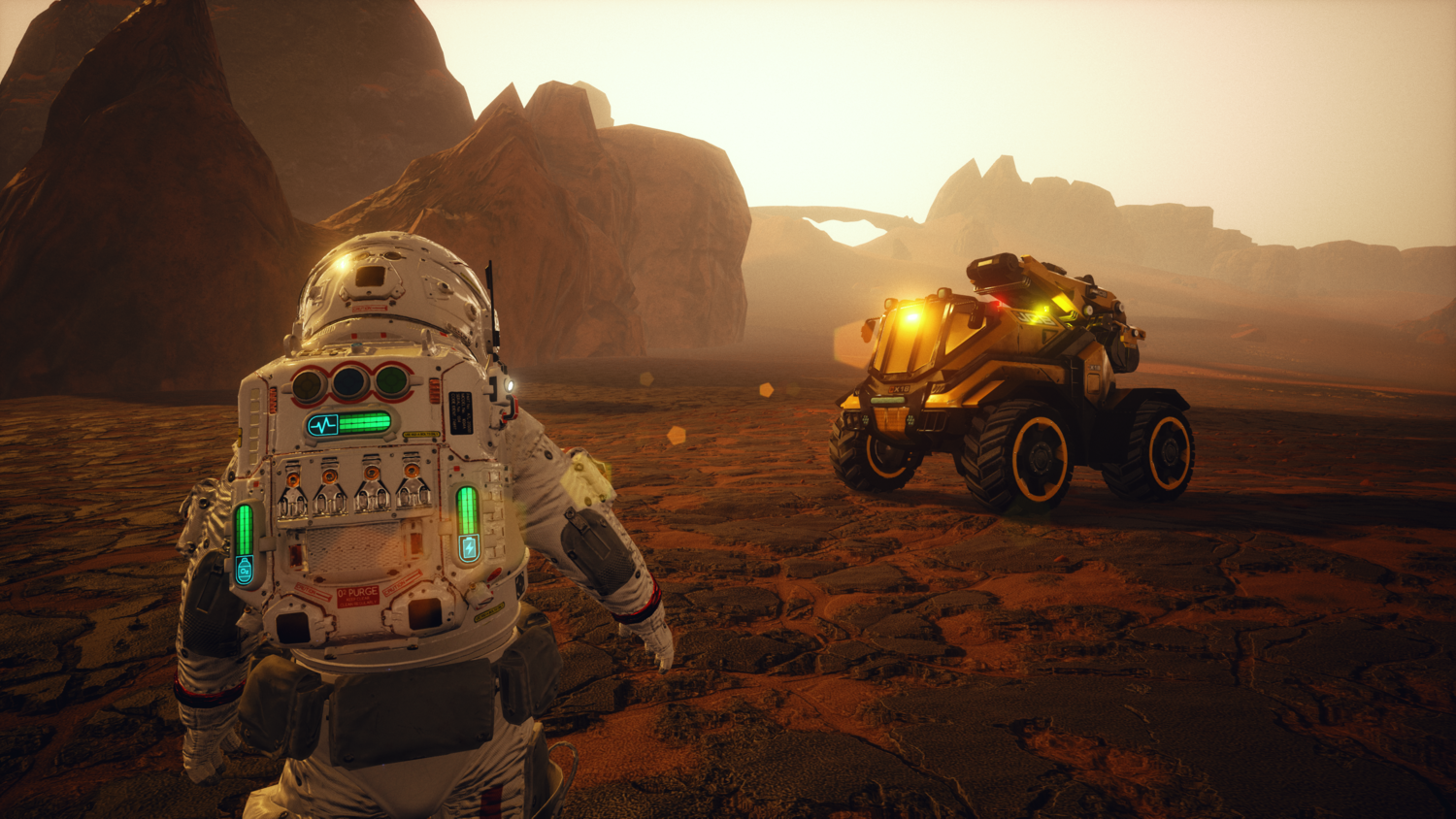 So first off let’s talk visuals, the main star of the show here is Mars and visually it does it’s job well. The planet looks as beautiful as it does deadly, sand storms, thunderstorms and eerie peace are all completely different experiences both visually as they are to travel through.

The character and vehicles models are also well designed and look very plausible and of course have that familiar JCB branding thrown on them. The issue I found when playing this version on the Switch is, unless you’re super close up and still the game looks really rough, jaggies and fuzziness abound, it’s a real visual mess to look at in motion and can be quite disorientating.

You’ll explore various lava and gas filled caves throughout your quest and the graphics suffer the same fate, often you have to have your nose actually pressed against the walls of the cave before any of the detail pops in, jarring is an understatement.

On the audio side the voice acting for your assistant is ok, nothing to write home about but I’ve certainly heard worse. In terms of sound, everything sounds as it should, the effects on offer here are top notch and certainly help ease you into your tough role, nothing quite hits as hard as being trapped in a loud Sandstorm or hearing your motor battle as you travel over rough terrain avoiding lightning strikes. 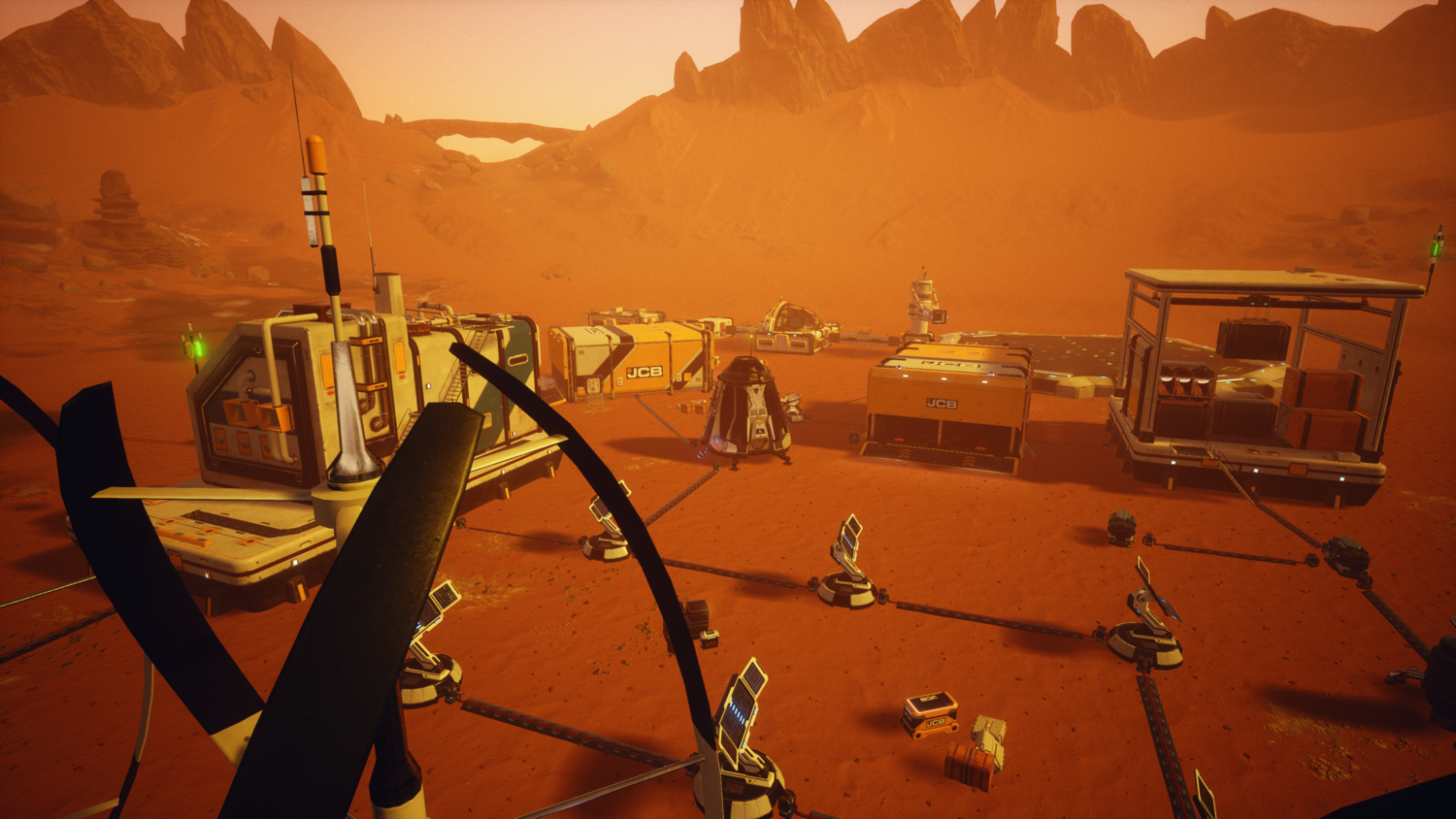 So how is the life of a JCB Pioneer? Well it’s certainly something that’s for sure, just maybe it’s not for everyone!. Once you’ve seen yourself through the tutorial you are given 3 main tasks to aid the colonization of Mars, these are mostly made of fetch quests without markers which involve you plodding slowly around the planet, battling with the controls, fixing stuff with your repair gun and slowly building new structures and equipment with your 3D printer.

As this is more of a Simulation than a survival game, the only enemies are the weather, the terrain, hunger and oxygen. Think of this as No Man’s Sky’s on surface gameplay without any of the wildlife or sentry bots to fight and you get a fine idea of what to expect here.

It’s not specifically a bad game as such, it’s just that incredibly niche that it would be hard to even suggest the game to anyone other than something with a serious love of JCB. The controls are quite unintuitive, the gameplay loop really isn’t too satisfying and being that it’s on Mars even the floaty physics get real tiresome quite quickly. Even after the tutorial I felt I had seen everything the game had to offer but I plodded on regardless and really didn’t take that much else from the game. 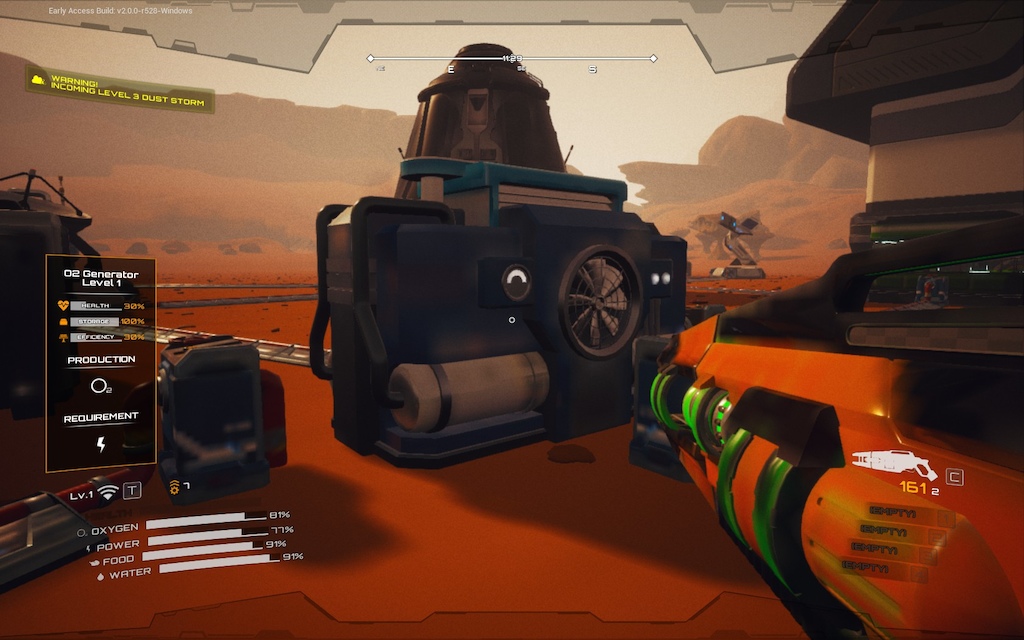 Overall it’s a bizarre title, one that’s tough to recommend and seemingly doesn’t have too much to it, maybe in time more exciting content will be added to it but for the time being I’m really not in a rush to return to my JCB and plod aimlessly around Mars anytime soon.