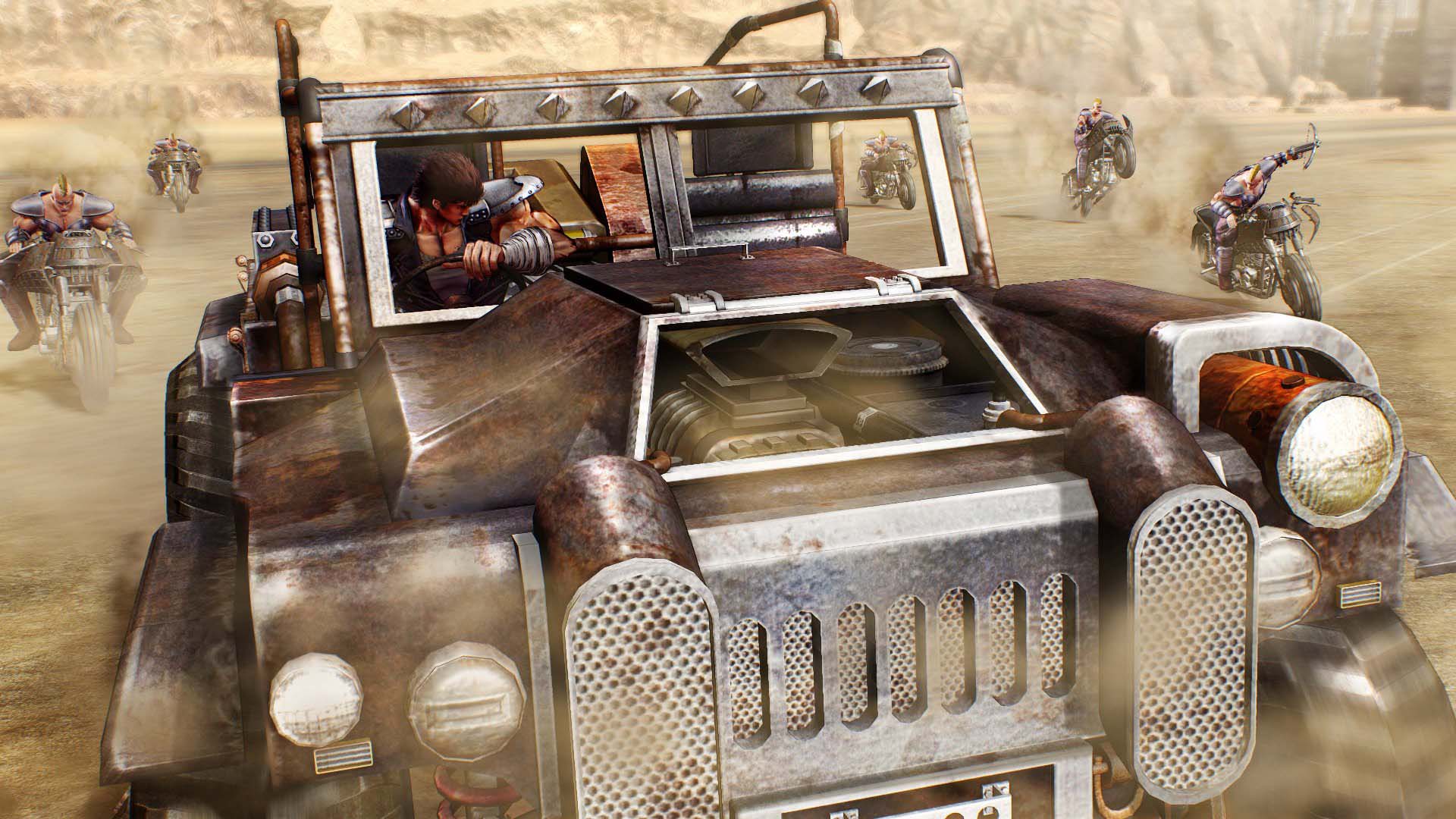 For those of you unfamiliar with Fist of the North Star, it’s basically Mad Max meets Kung Fu action with more than a splattering of 80’s OTT anime. Yakuza is beautifully crafted narrative combined with OTT action and larger than life characters, someone at Sega had the best idea and came up with this title.

Rather than following the established narrative of FotNS, Sega decided to take that, give it a little spin and create it’s own narrative with characters from the series and centre it all around the mysterious oasis of Eden.

Eden is aptly named for a location, it has electricity, it has merchants and all kinds of loots and goodies, all the things the bandits of the post apocalyptic wasteland could want. Kenshiro who is the very definition of bad ass arrives at Eden in hopes of finding his lost love Yuria, this follows the tutorial which is based on his fight with King in manga. Following Kenshiro’s arrival things start to go down hill quickly not only for Ken but also Eden, fortunately Ken isn’t the kind of man to stand by and let innocents bare the wrath of greedy bandits and power mad nut jobs & thus Ken’s stay in Eden happens and remains as you would imagine, bloody.

As a fan of FoTNS I was eager to see how Sega would take on this legendary narrative and for the most part it all worked well, alot of fan favourite characters turn up in new situations and if you play with the Japanese dub these characters are also voiced by the very familiar voice cast from the Yakuza games!. 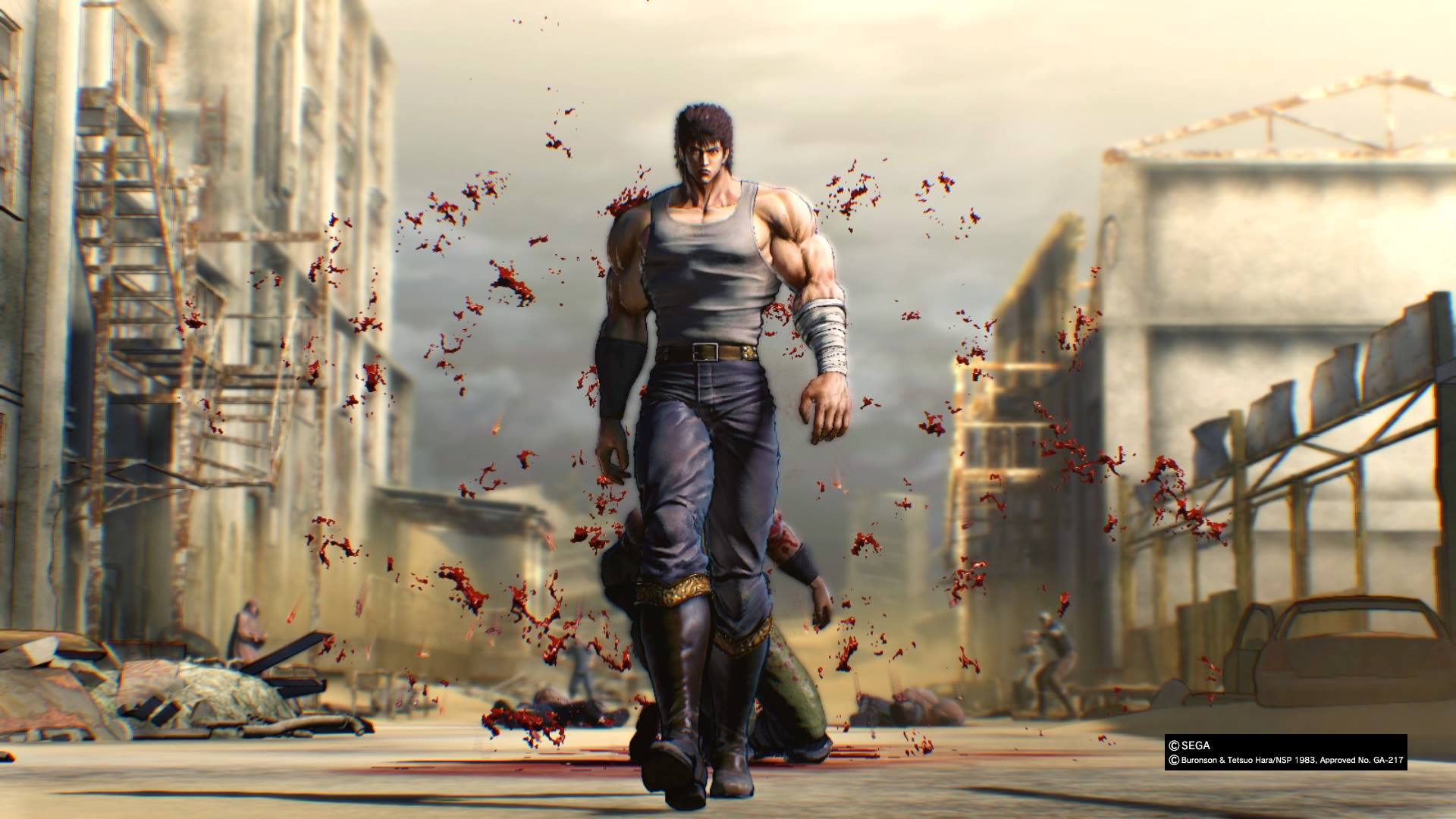 Graphically FoTNS employs a cell shaded style to it which helps differentiate it’s self from the Yakuza series and keeps it very faithful to it’s source material. Everything here looks exactly how it should, FoTNS has never looked so good from it’s characters to it’s environments. Eden it’s self is a fantastic blend of post apocalyptic city building and a slight sprinkle of everyone’s favourite fictional Japanese entertainment district. I like that twist on location, it felt natural within the narrative and it also felt familiar from my time with the Yakuza series.

The game’s only crack shows here, FoTNS:LP runs on the previous Yakuza engine, what this means is it’s not as animated as Yakuza 6 or Kiwami 2 and after playing those titles back to back it really shows the difference between the engines. Everyone seems to look and act quite stiff and animations are kept to a minimal when in game, the cutscenes are naturally well done as always but the in game chats and actions don’t quite stand up to the highest points of the Yakuza series. 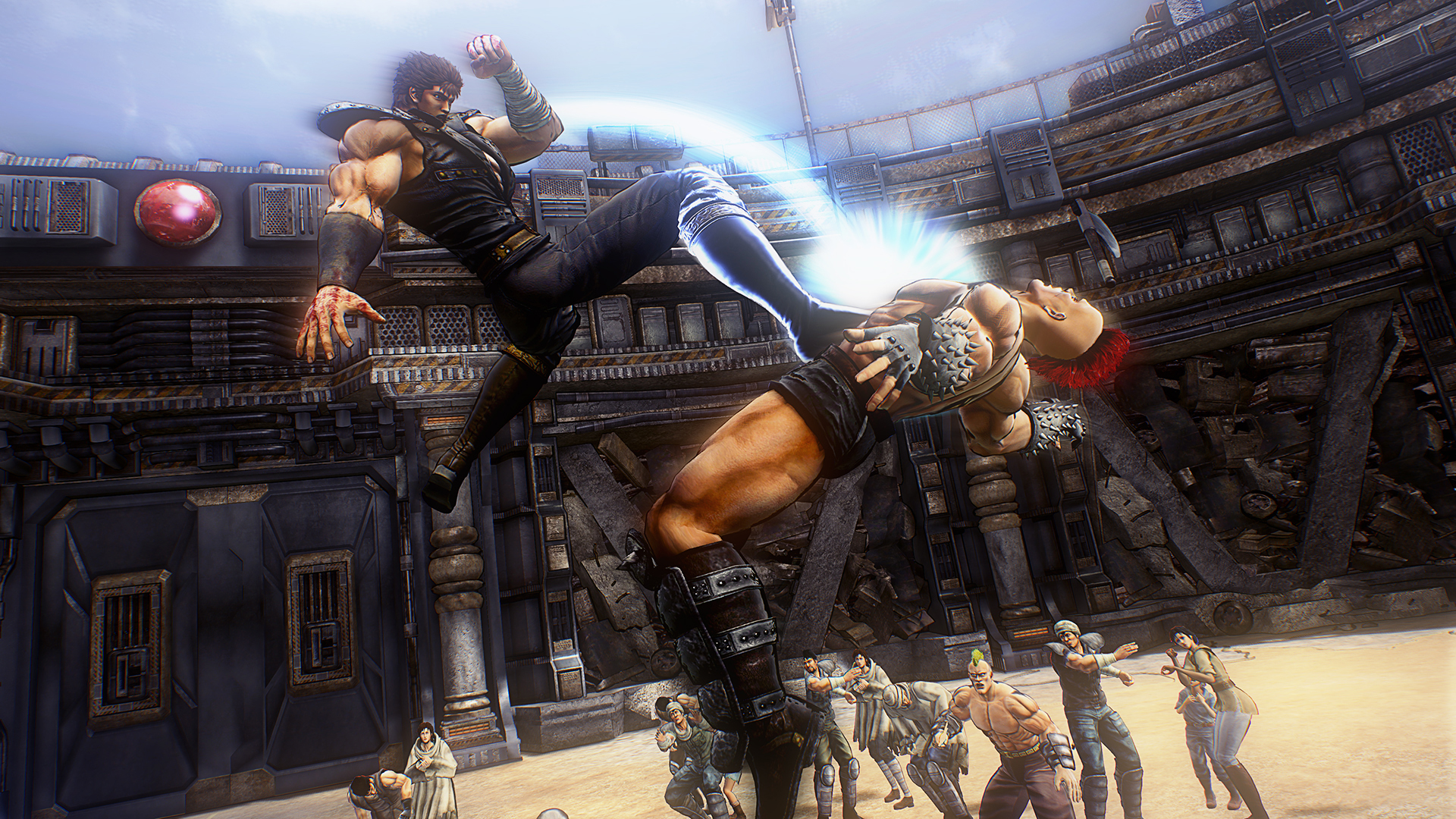 On the audio side of things Fist of the North Star: Lost Paradise is no slouch, it features a natural feeling Japanese dub and lets face it, Kiryu’s V/A voicing Kenshiro is a massive positive & of course Majima’s voice actor is also naturally placed too. For the first time since Yakuza 1 on the PS2 this game also features a quite serviceable English dub, part of the selling point was hearing the Yakuza cast voice memorable characters for me so I didn’t really spend much time with the English dub but it’s a fantastic addition for new fans or fans who watched FoTNS with an English dub.

Fist of the North Star: Lost Paradise also features an amazing soundtrack as expected of the series, expect alot of cheese metal and of course YA WA SHOCK! but there was another aspect that brought a smile to my face. When you’re driving around the Wasteland you can listen to iconic tracks from other Sega titles such as Super Monkey Ball and Binary Domain, this little nod was fantastic and made me spend alot more time in the Wasteland that I meant to. 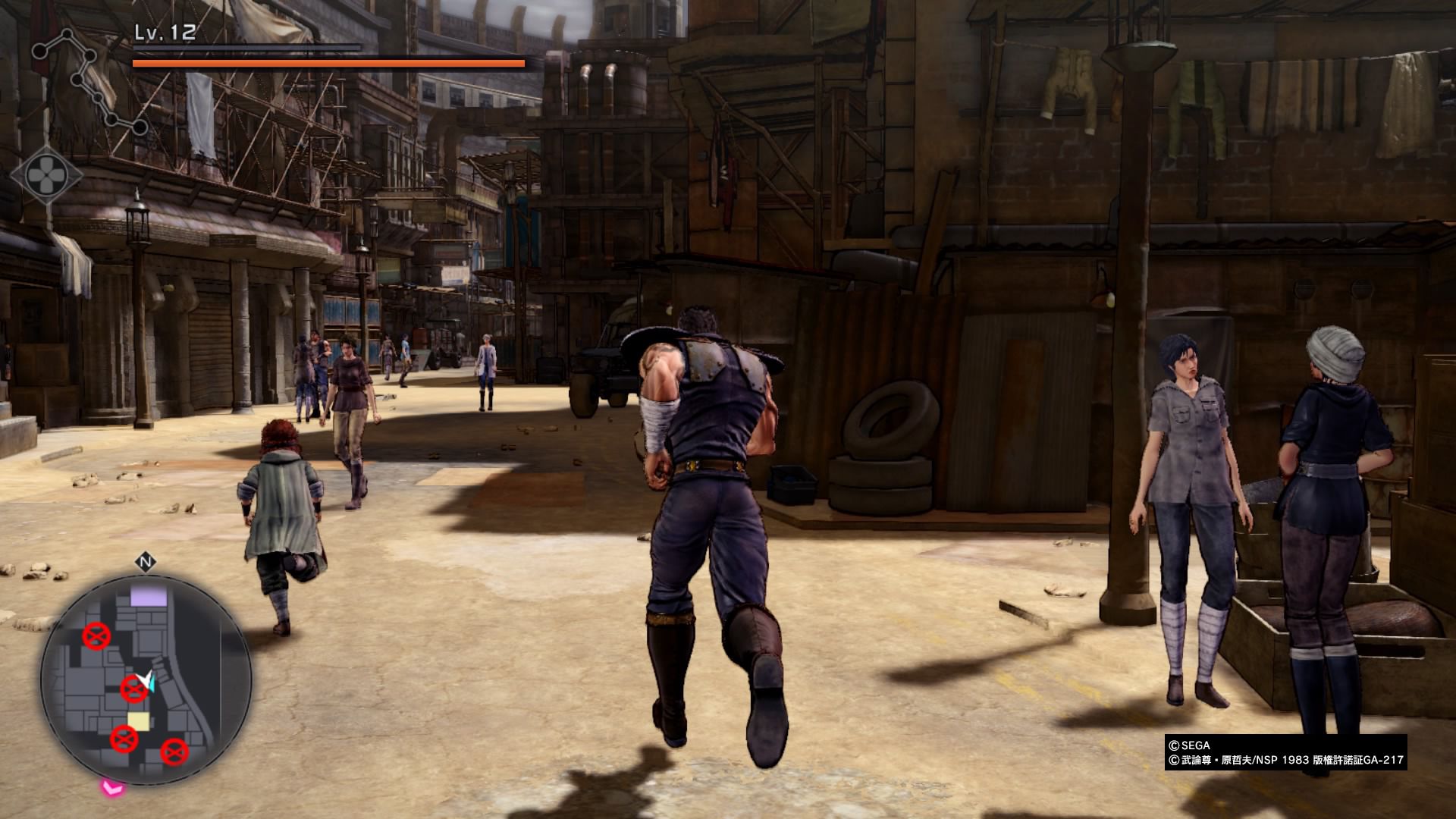 Being that this is a Yakuza title, if you have played any of the others you’ll be right at home with the style of gameplay here, everything you’ve loved from the others is here. Over 50 Substories, a plethora of mini games included the fantastically extreme Bartender mini game, the NES FoTNS game is available to play & there is even a quite a bit of content which involves you building a car and exploring the Wasteland ala Mad Max.

The combat as expected is top notch, it’s the familiar Yakuza combat with all the blood and silliness of the Fist of the North Star series. You hit one of Ken’s signature moves and you get treated to a mini cutscene, one of his moves will tear his top off with pure power, One of the funnier aspects of the game is that you can hit someone, make them scream in pain then actually pick that shout up & hit people with it, it’s utterly mental and totally represents just how larger than life this series and game actually is. 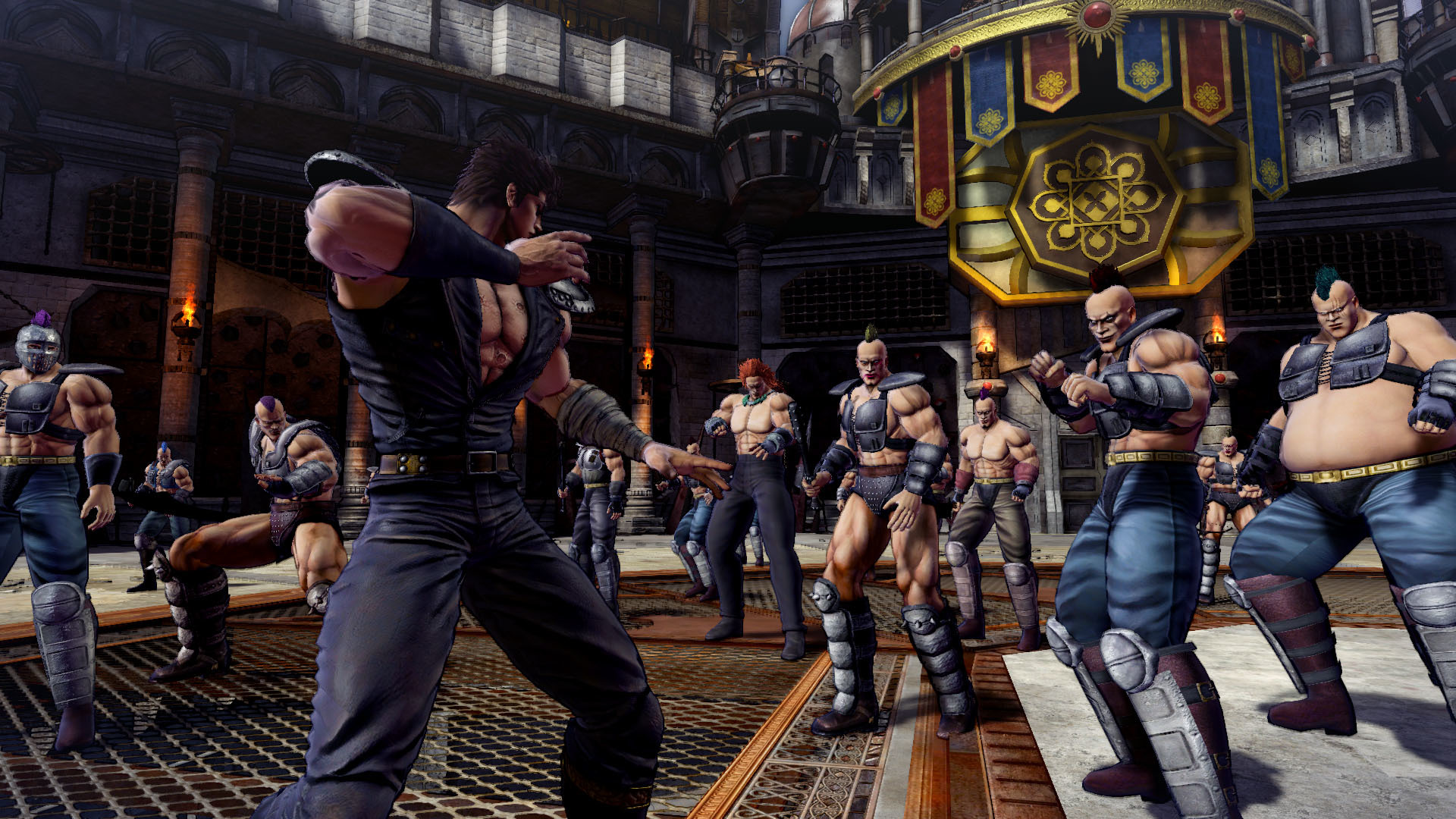 The thing with Fist of The North Star: Lost Paradise is that it’s 100% completely absurd and that’s what really sells it. It’s a smattering of 80’s anime & action with gore and Yakuza’s unique brand of quirk, it’s a match made in heaven and even when it was announced I knew this was a title that would be special.

If you are a fan of either of the series represented or just like something truly outlandish, something that can switch from goofy to gritty in a scene and it doesn’t affect pacing or the overall theme, Fist of the North Star: Lost Paradise is THE title to play. There isn’t really anything wrong with the game beyond the engine feeling a little old, it’s another stellar game to add to the Yakuza franchise and in my opinion THE best Fist of the North Star experience you can get!.