Metal Max is a series that has somehow never really made it over to Europe, it saw a single spin off release in the US but beyond that we have yet to experience the JRPG take on Mad Max!. NIS aimed to change this with the latest title in the series Metal Max Xeno. Was it worth the wait or should it’s releases remained as barren as the lands the game is set?. Read on to find out.

Set in the year 209X in the barren post apocalyptic lands of Tokyo, Metal Max Xeno puts you in the boots of Talis, a young boy who sees his family and friends wiped out at the hands of Machine monster hybrids called SoNS. Events unfold and Talis gets his hands on a Tank and decides to take the fight to the SoNS while earning himself some sweet moolah to upgrade his cage of death and take even more of the SoNS down. Naturally this is in JRPG territory so he comes across the last dregs of humanity and eventually gets pulled into a tale which will decide the fate of the remaining few percent of humanity.

The story pacing in Metal Max Xeno can be quite jarring for fans of the genre as the story doesn’t really give you too much till much later in the title and even then it is more than happy to give you a vague objective and let you off into the wilds. The story does have some quirks about it, the cast are well written if not a little under developed and the appearance of females does start to turn the conversations to a more “Adult” narrative about re-population, yes even out here at the end of the word we have fan service!. 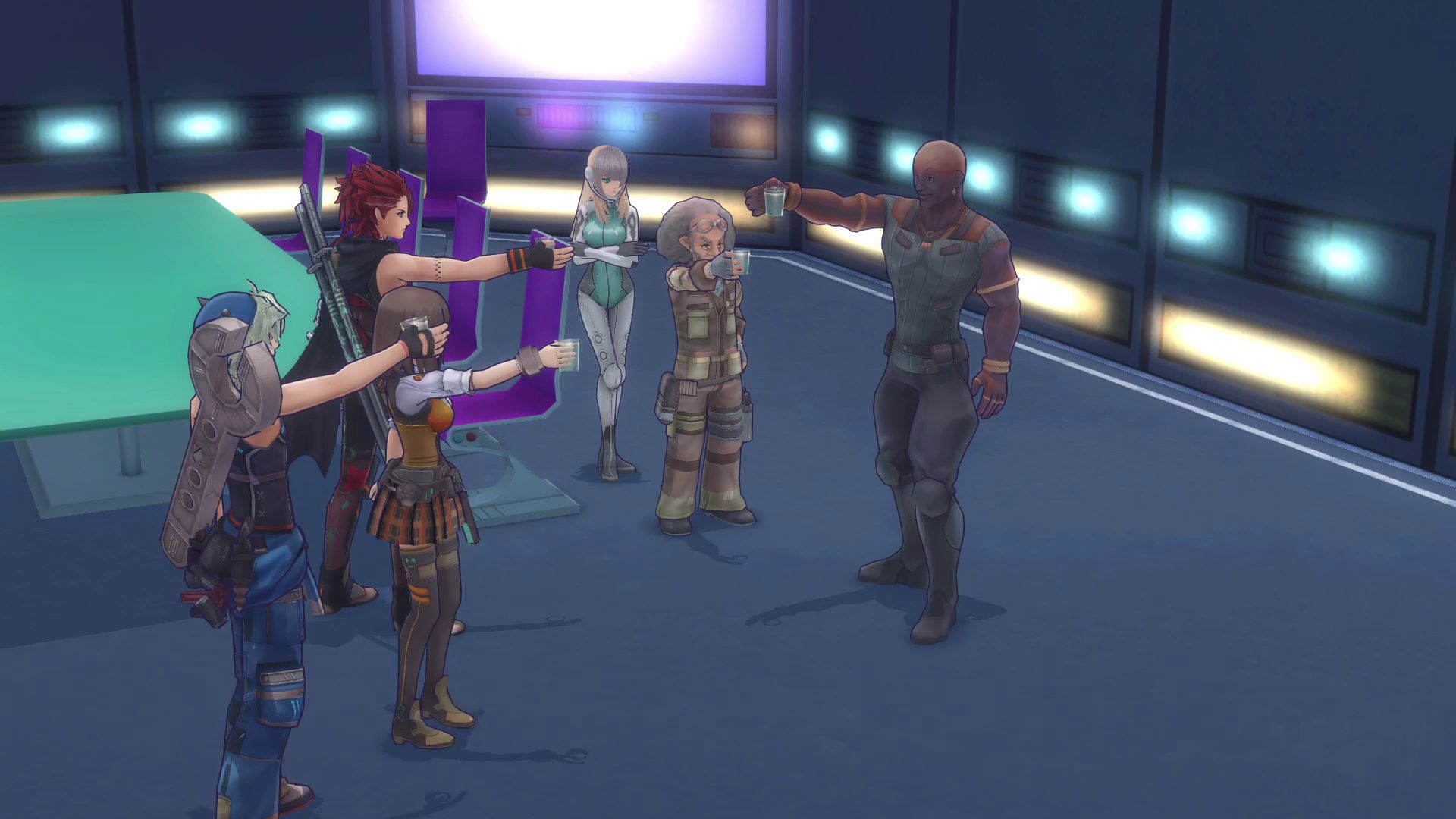 I quite enjoyed the sparse story sections, it helped build an atmosphere throughout the game that it’s not a case of “Friendship will save the day”, it’s the last days of the human race and Talis is focused on wiping out the SoNS who have caused this, if not for mostly selfish reasons. As I previously mentioned the story does change theme around the halfway mark and it was a little off putting but the core atmosphere manages to remain fantastic throughout.

Visually you can tell exactly where Metal Max Xeno came from, this is a Vita port with no added bells or whistles. The barren wastelands manage to be REALLY barren and despite being quite self contained areas they come off really sparse with no incentive to explore the different yet same look locals. The same applies to the character models, despite being well drawn they animate poorly with very few animations and have that awkward floaty look when moving around especially with the in game cutscenes.

The enemy designs and the tanks are all fantastic, the tanks being initially based off of real tanks and then slightly getting into wacky anime territory, some of the bigger SoNS look like something that could even rival Godzilla and really fuse the Western/Eastern mix that Metal Max Xeno has going for it.

The voice cast is a little hit and miss, for the most part it’s passable but there are a few scenes where the cringe really sets in and makes you want to dive over to your remote to silence it. Fortunately this doesn’t translate that much to the soundtrack!. 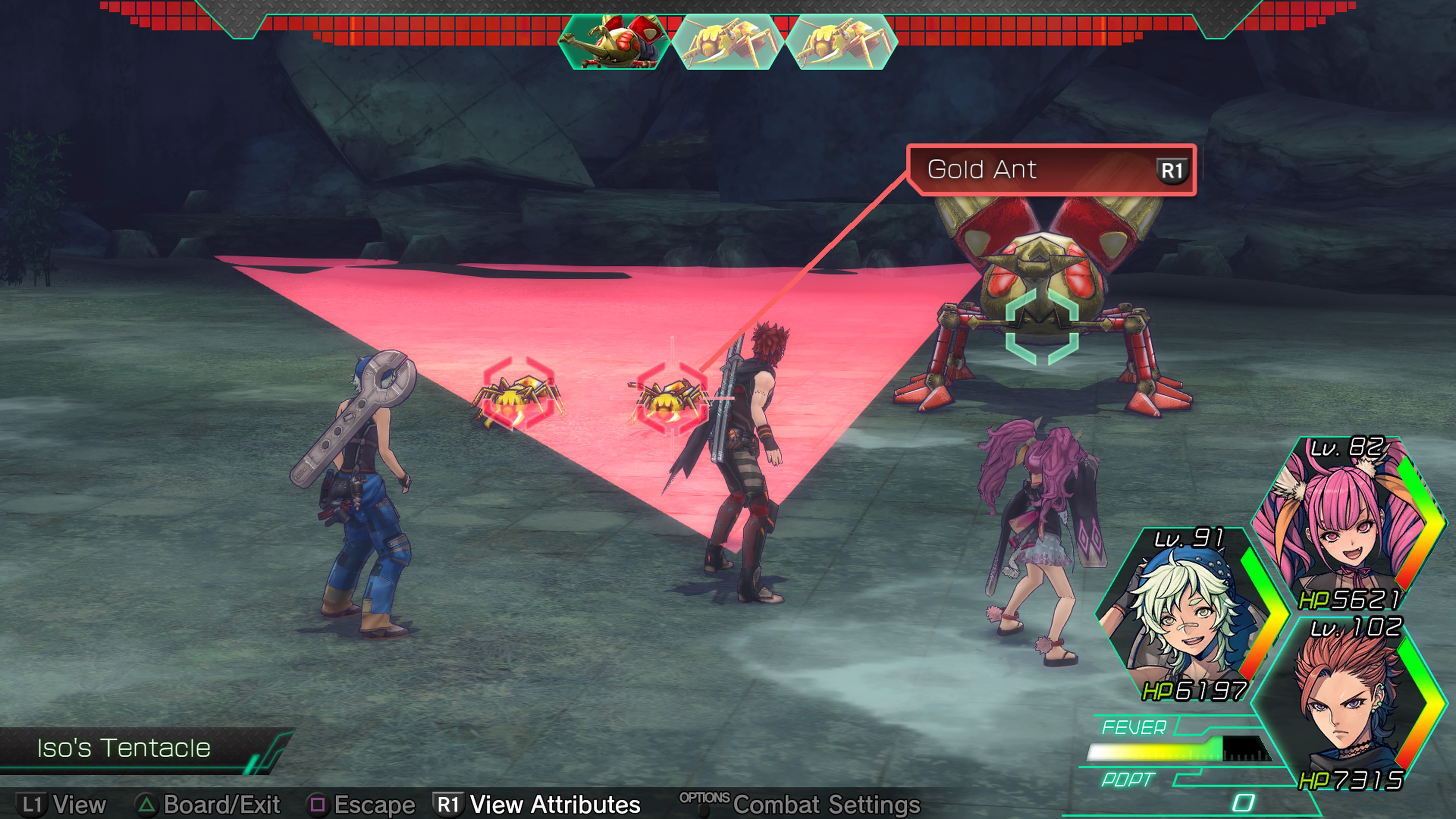 The soundtrack for the game is outstanding for fans of Metal music, ear pleasing solos and thrash all around here in battle scenes and cut-scenes. There are a few irritating tracks, mainly the dungeon exploration one and considering the amount of battles you get into it could of seen benefit from maybe having another battle track or two for random battles but over all the soundtrack is one of my favourite things about this title.Metal Max Xeno plays like a traditional JRPG with just a few tweaks to help it stand out of the crowd, namely the mix between Tank Combat and On Foot combat. Throughout the 30+ hours of the game you’ll be exploring dungeons on foot or the bigger areas in your cage of death, both combat is similar in the fact it’s turn based but it means you need to make sure you’ll fully equipped for both. You’ll spend alot of time finding loot which you can use to craft more weapons for your tanks, balancing each out when you havea full team and making full use of every variation of weapon to help hit weaknesses.

The more you fight, the more “Focus” you build up, time this just right and you can turn the tide of any battle with a devastating Focus attack which usually breaks shields and gives you the advantage. Another nice feature is when you’re in the tank you can pre-preemptively attack foes on the field, this drains your ammo so you need to pick and choose your fights but it can not only give you a head start but also kill some enemies in one, foregoing the need to battle altogether.

Field and Dungeon exploration is your standard fare, unfortuantey some of the dungeons suffer Superman 64 levels of fog and nothing here really strikes as original which is a shame as the setting and atmosphere could of really produced some quite wacky and interesting dungeon designs. Throughout the game you can also improve your party by completing in game achievements, these also act as a somewhat mini tutorial and I personally thought it was a fantastic idea.

I really enjoyed my time with Metal Max Xeno, it’s been a while since I’ve played one of the more “Mid range” JRPG titles and this one from it’s announcement ticked several boxes for me. The atmosphere and spare story pacing I found refreshing and it didn’t take too long for me to fully accept the role of Monster Hunter within the game world. Metal Max Xeno seems to favour gameplay over in depth story telling and this was a mix I could certainly get behind, it’s a shame it wasn’t designed with Playstation 4 in mind as they could of really pushed the boat out here but overall it was a fantastic little title and one of the better JRPG titles I’ve spent time with lately. It’s taken a long time for Metal Max to finally get here but here’s hoping it’s staying for the long haul!.