Fighting EX Layer is the latest title from the company Arika, famous for Street Fighter EX + Alpha and Skullomania, both of these passed me by when they originally released. Announcing the game on April’s Fools day and not announcing a name for quite sometime this game became quite the enigma within the FGC. Now it’s released and ready to be abused by our battle worn arcade sticks. Does it stack up to today’s fighting game resurgence or is it another nostalgia cash in? QFC FP to find out. 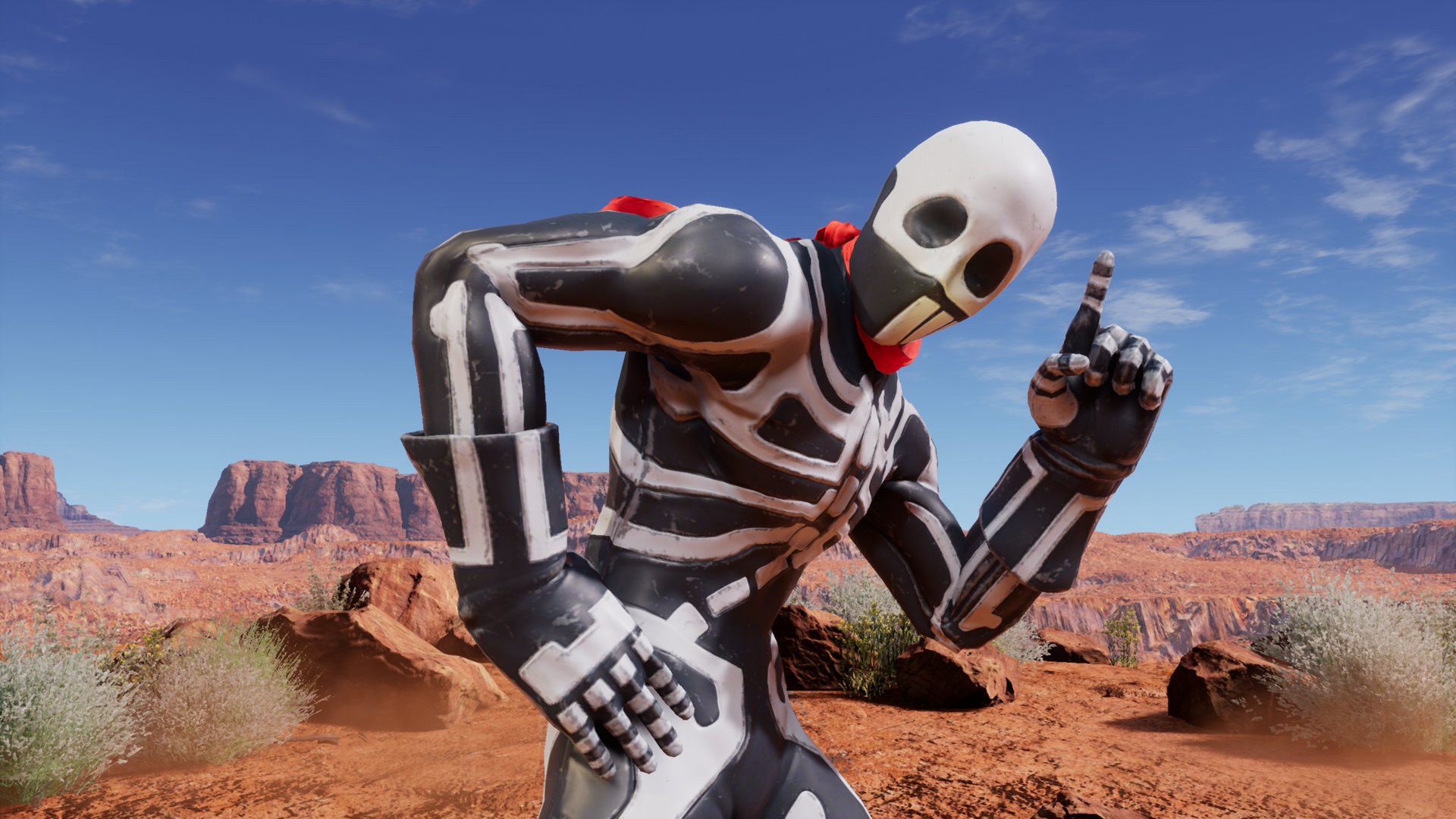 Right out the start of the gate I’ll say that this is a “Review in progress”, the game has released in somewhat of an “Early access” state in regards to features you’d expect from the genre. The game comes with a functioning Online mode with Ranked & Casual features, A Training mode and a hidden Survival mode, outside of that there really isn’t much bar couch multiplayer.

As of the time of penning this review Arika have confirmed that an Arcade Mode along with a few characters and some QoL improvements are being made so I feel it’d be hasty to slap this game with a final review until at the very least this first big “Update” drops.

I have had quite a few sessions online with the game and spent ample time within it’s training mode to at least give somewhat of an impression of Fighting EX Layer, without beating around the bush, I love it. 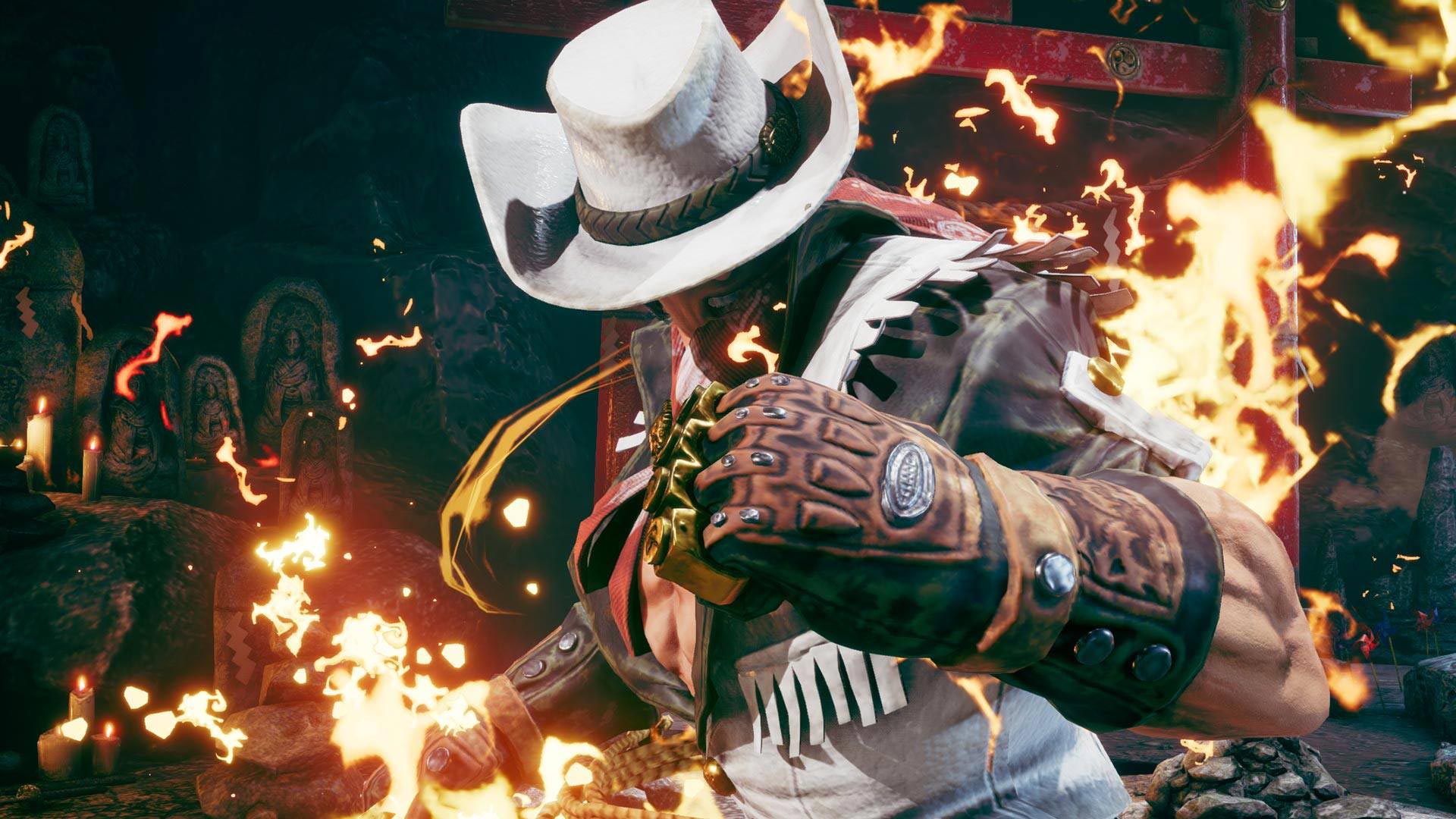 The game visually looks stunning, the character models look fantastic, the lighting is spot on and the stages are such a treat for the eyes, there are even night versions of each stage bar training which just ups the visuals even more. The only gripe I have is with the animation within a fight, the characters animate rather stiff and lack the little nuances of recent fighters in terms of small movements when idle or reeling from an attack, nothing major it just looks somewhat robotic and has the most unnatural looking jump attack animations I’ve seen in quite some time.

The game handles alot like Street Fighter in that it’s a 2D fighter, has similar meters and special moves are done with the usual input, that is if you don’t use the newbie friendly “progressive” mode. The main hook with this title is the Gougi system which I’ll go into & just how chainable the “Super” moves are. 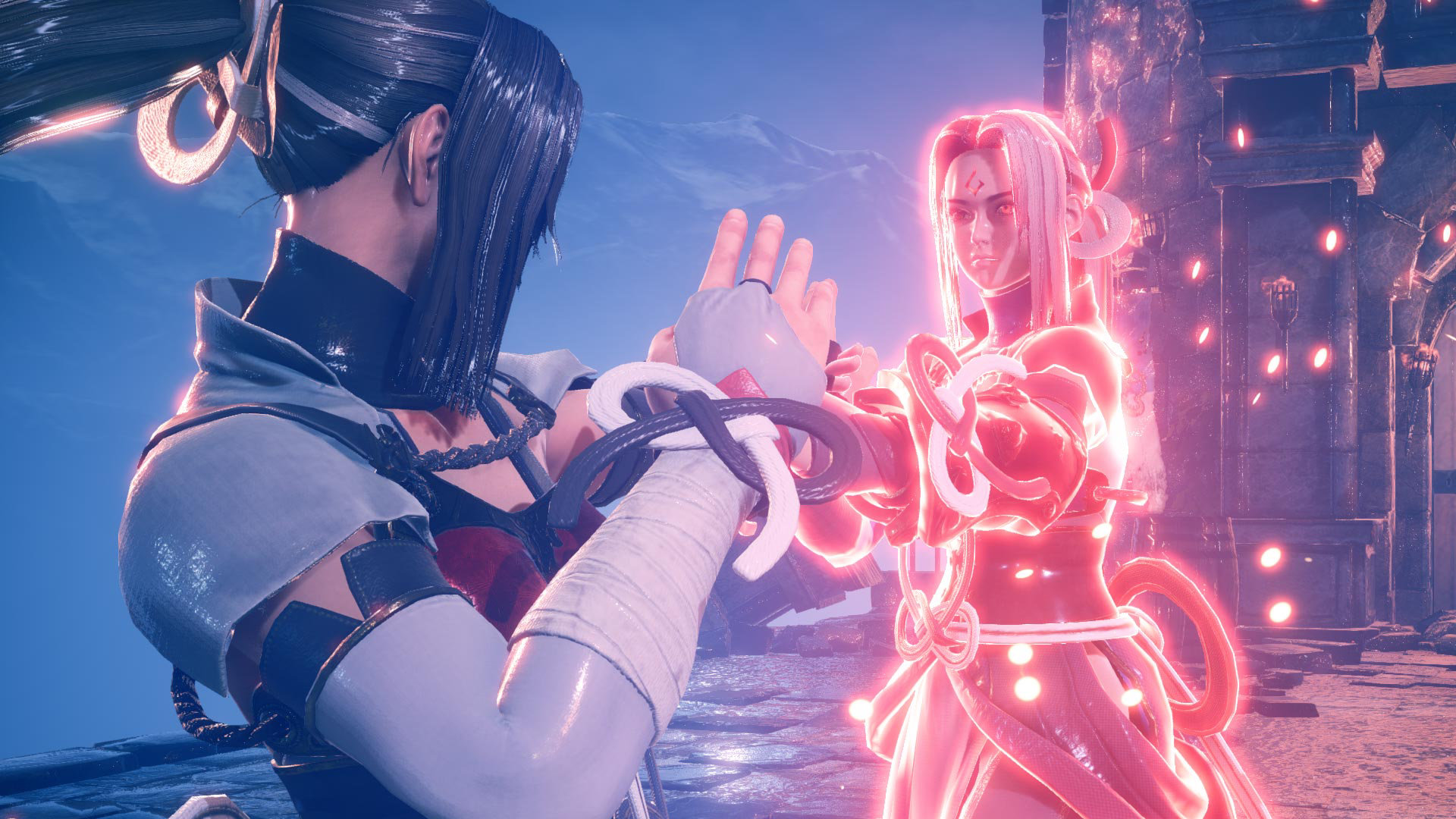 So when you initially boot up the game you are greeted with a roster so wacky it’d make SNK blush on it’s best day. If you’re familiar with Street Fighter’s past you’ll most likely at least know Skullomania & Doctrine Dark, two of the more stand out designs (for completely different reasons!), you’ll also have a handle on it’s Ryu & Ken characters Allen & Kairi. If you have played any of the Street Fighter EX games the roster will be very familiar to you.

The diversity of the roster really is a huge selling point for me, they look like the strangest band of misfits around and that made me want to spend time with every character on there, from the demonic looking armour Garuda to the hardened western cowboy C.Jack there is a design for everyone.

After trying out the combo challenges and Training mode (Hidden Survival mode is a must!) I decided to try my luck with Shadow Geiss, A dark Power Ranger mixed with Viewtiful Joe who would just as easily shoulder barge a foe as he would fly across the screen and stomp on their head ala M.Bison. 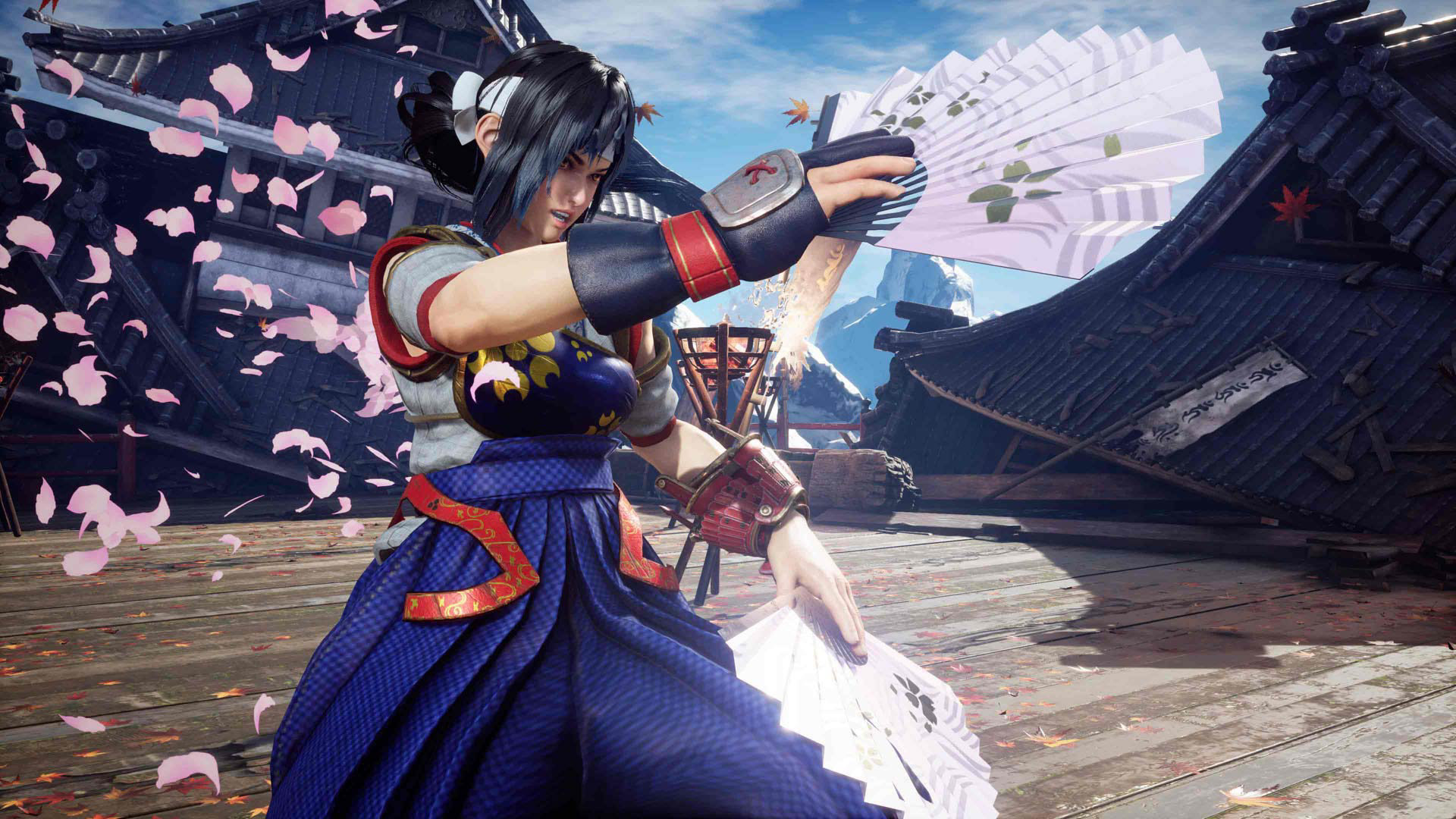 Despite the Online being somewhat quiet in my region & with my beginners Rank, I eventually started pulling matches and even those in the 3 bar region were still playable enough, though that seemed to be mixed luck as some 4 bar matches had horrid lag. Overall the online holds up well enough, it just needs more players and the ability for it to boot straight back into Training mode rather than the search or main menus.

The Gougi system is very similar to Street Figher x Tekken’s Gem system only without the customization. You pick a Gougi set which appeals to your playstyle and in turn it rewards you to how you play. For example, one of the sets I used gave me extra combo attacks if I won a round but gave me “armour” on everything but heavies if I lost a round, another would allow me to instantly jump towards my opponent no matter where on the stage they were allowing for great punish opportunities. It’s a fantastic system that really rewards you knowing how you play a character or how you can change more defensive characters into more aggressive beasts.

The super moves in this game are designed to be easy to chain into and this plays out so naturally. The combo execution is a little stricter than other games of the genre but managing to pull of a combo that lands you 3 Super Combos in a row is something of beauty and is bound to put any opponent on tilt. 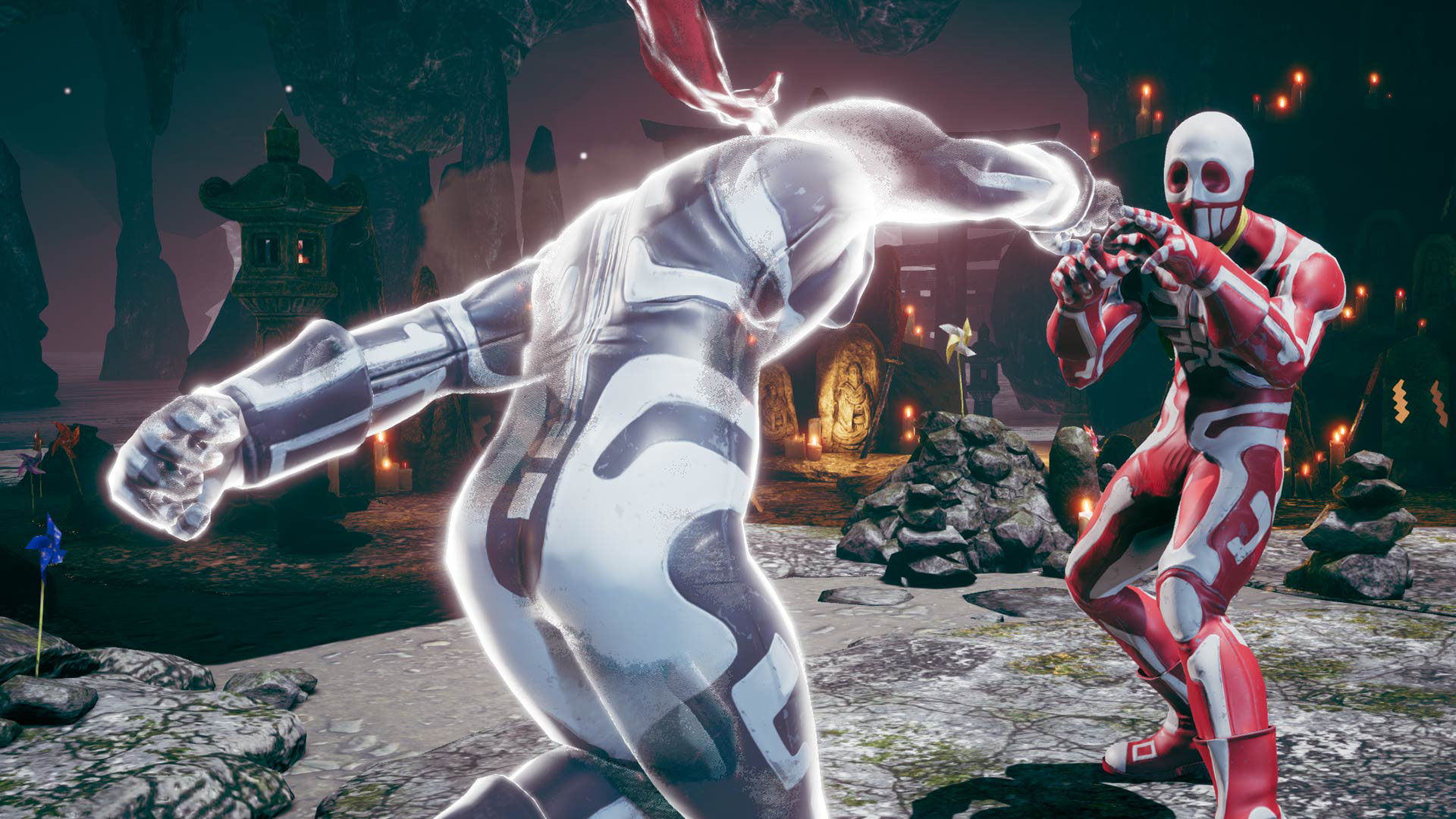 As I stated at the start, this is a review in progress, maybe even a preview as the game is that light on the features. The core gameplay is there, the Gougi system is great & the roster really is fantastic with something for everyone. It’s just a shame that at the moment, despite being charged at full price, it really isn’t a full package and I think that is why there isn’t enough online activity.

There is a “Light” option for the game which is a little cheaper but doesn’t have the full roster or Gougi set but it may be worth holding off and seeing what the new update will bring along with it’s Arcade Mode & another 2 characters to the weird and wonderful roster. 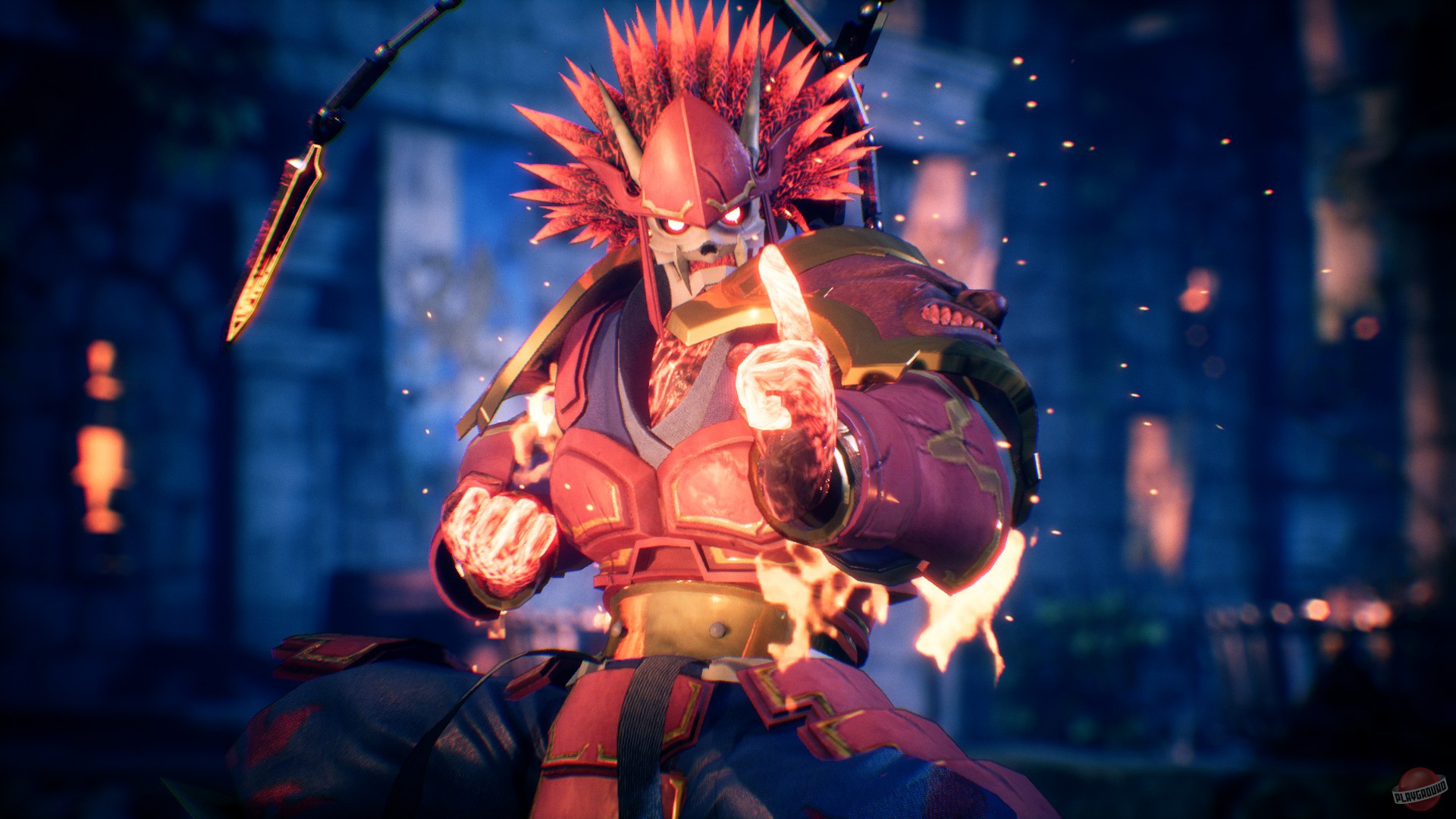 As it stands now, I love Fighting EX Layer, it’s a little slice of 90s fighting game goofiness and plays so well. The lack of content makes it quite a hard recommend to anyone who doesn’t adore the genre or has a deep rooted love for the “EX” series of games. The future of the game relies on sales and people playing and I can only hope that the games first major update brings this fantastic title into the running a little more. Do it for Skullomania!.