Survive! Mr Cube, intragame’s twin stick rouge-like RPG makes its way to UK PS4’s this month – with the in-house developed game currently available in North America and now seeing a release in Europe during June. A version for the Nintendo Switch is currently penciled in for a release during July or August, still to be confirmed. Lets see how the console release fares… 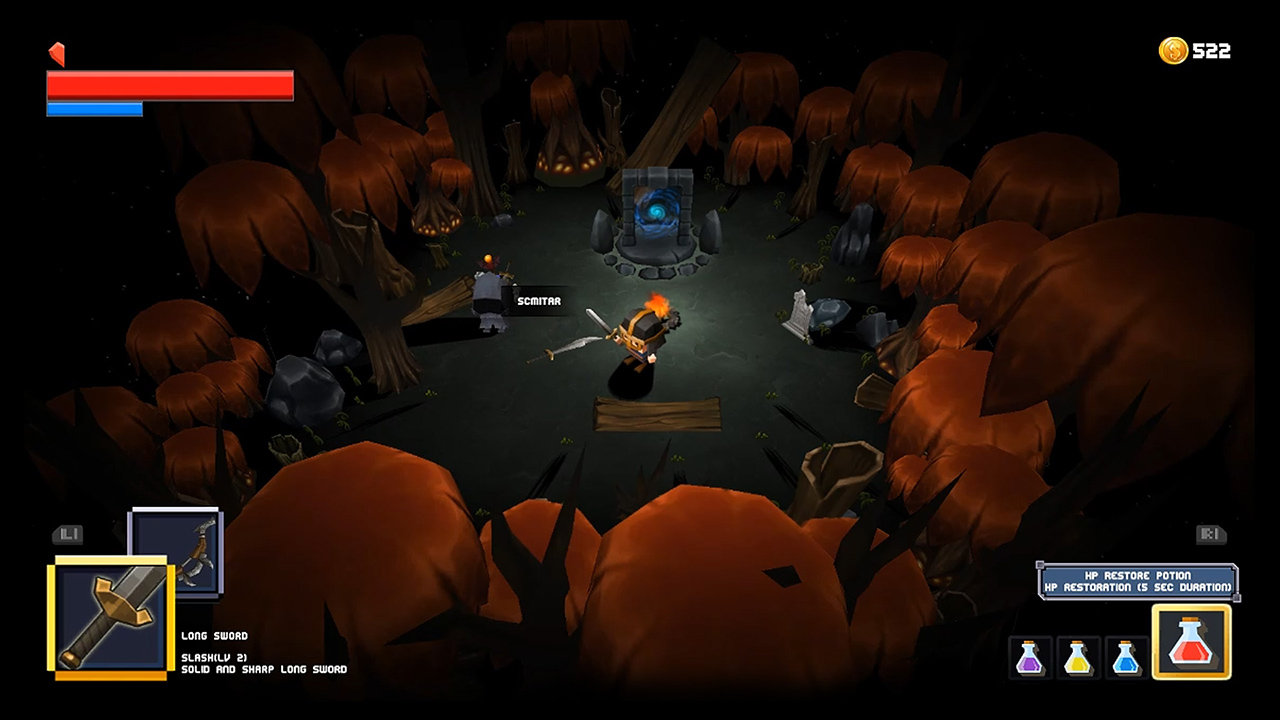 The story of survive Mr cube sees you take up the role of the aptly named Mr cube as he finds himself in a strange new world after meeting a hooded old stranger down his local watering hole. He offers him a pill causing him to lose conciseness, only to awaken in a monster infested world where his only hope is to use his wits and weapons to survive this unforgiving place and make it home to his love.

SERIOUS life lesson time here. Don’t take pills from strangers. You could end up in hospital, or worse, another dimension full of adorable monster spiders that wish to eat your face! Despite the lack of common sense Mr cube exhibits during these opening scenes, this game would likely be much shorter if someone taught him to say no to drugs in school. Thankfully however, he must have skipped that day allowing this fun little title to be born.

With that said there is not a whole lot more meat on this story outside the short dialog scenes at the start of the title that outline the story I stated above. In only a few short minutes the only dialog I encountered outside of this consisted of a short tutorial and the repeated “this guy is to weak I need to choose better” when ever I died, leaving me lusting for some more details that sadly didn’t seem so come (as far as I progressed). Despite lacking any true substance the idea behind the story was strangely interesting leaving me with a unfulfilled desire to know more, to know why or how. While I don’t know if these answers do come at this moment it does well at developing that initial yearning for answers in order to get you playing. 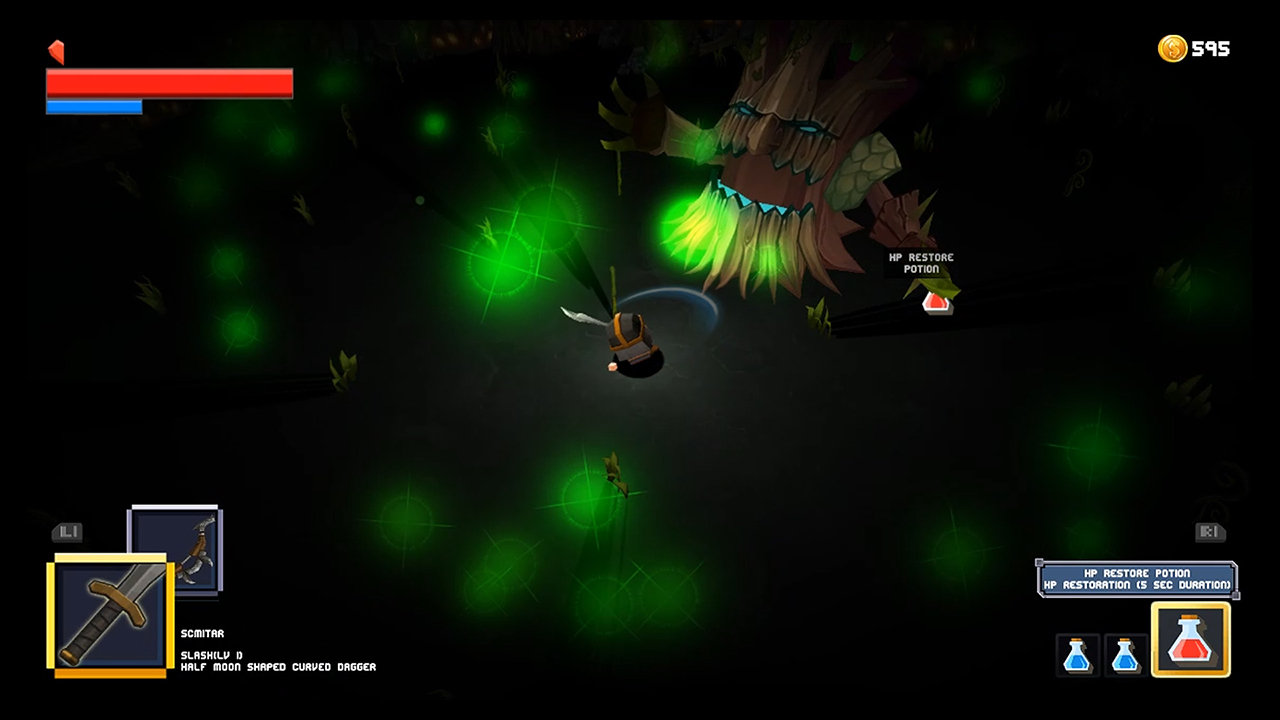 The aesthetic of Mr cube uses beautifully drawn sketches in the story segments and “Voxel based retro-like graphics” for the main gameplay, making the story segments stand out quite nicely and been visually appealing as well as being something I wouldn’t mind seeing more of and the characters you will be playing as well as there foe’s being deceptively adorable despite there insatiable thirst for murder. Don’t let the cutesy art style fool you!

The audio and sound effects in the title do a good job, with the ambient music as you explore the games environments and on Que SE when attacking foes, but sadly there is not a whole lot of variation. This has little effect given the games relatively short run time, but a little more would always nice.

The actual game play is incredibly simple to pick up thanks to its simple twin stick controls, with a simple tilt of the left stick making up movement and the right for attacking. A variety of weapons, be that a sword or magical staff or even a shotgun, are on offer as you take your given cube through this world. With that being said you will likely die a few times despite the simplicity, largely due to a combination of encountering another AI controlled explorer who will hunt you to the depths of hell and back should they spot you. The harsh fact that not all the cubes are born equal some will have 10% of another cubes health while others will lack the stamina to pull a trigger without becoming winded, never mind using an iron club to squish a horde of spiders. 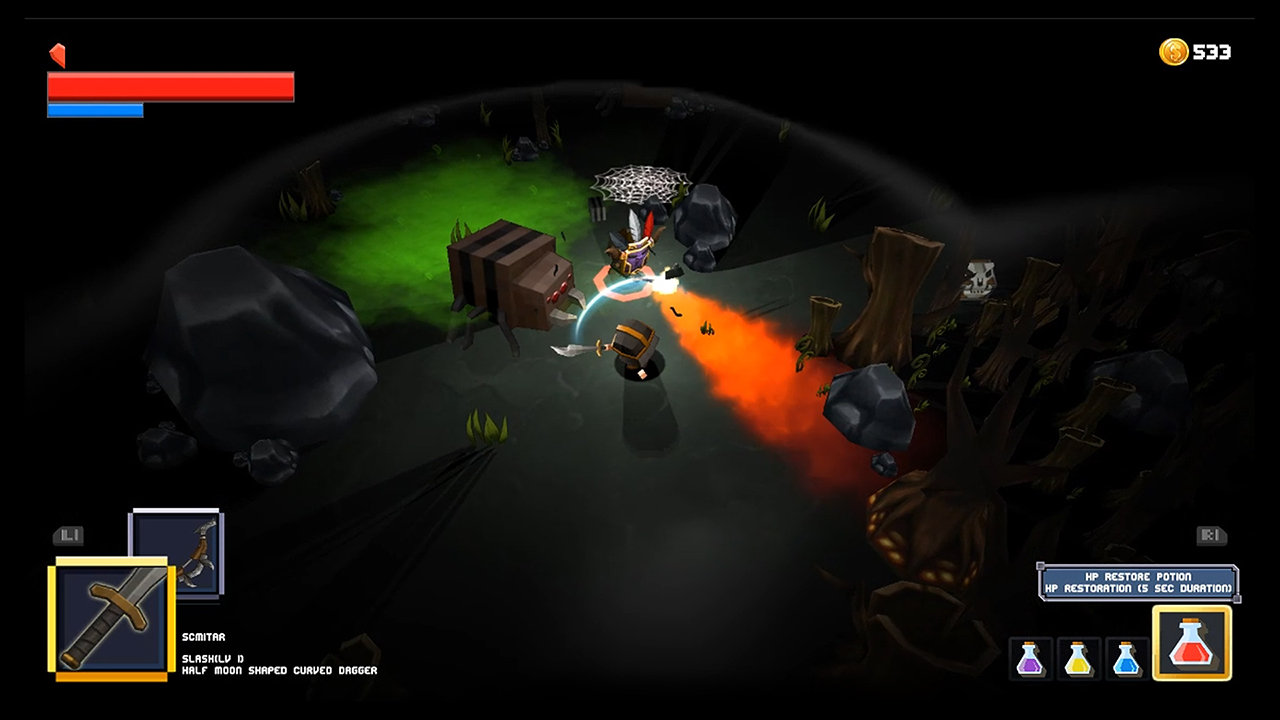 Your aim as you progress through the world of Mr cube is to find towers on each map zone that spawn monsters and fire energy blasts at you and defeat them to open up portals to the next map zone. These portals are usually located in an area corresponding with the direction you will be warped, with a tower in the north of a zone taking you to a northern map zone and southern to the south. During this you will want to gather items from chests, and with luck upgrades from the much rarer golden chests, to help you survive against the hordes of foes and sub bosses.

In part your success will be determined by luck of the draw for your given cube and starting weapon, with my personal experience I used up my first 3-4 attempts with cubes low in hp getting squished by 2 or 3, before getting what I can only assume was a blessing from the RNG gods with a character with the most hp of any other hero plus a decent amount of stamina. The platinum for the game arrived in just shy of 2 and a half hours funnily enough.

And thus the 2nd leg of my journey began with the discovery of a new area. At half way around this new zone I called it a day and discovered the only true issue I have with this title. There is no save! And I’m not talking reload if you die to avoid perma death, here that would defeat the whole point of the title, but a suspended save so you can stop playing for the evening and reload the next day at the same spot and the save delete upon been loaded would go a long long way. I was at the staging area for the 2nd area when I started the game up again once, but that was a whole 2 hours and 50% gone, only for me to go back through and get killed in the first zone and have to start from square one. That could mean to really progress I would have to sit for 2-4 hours and clear a floor! 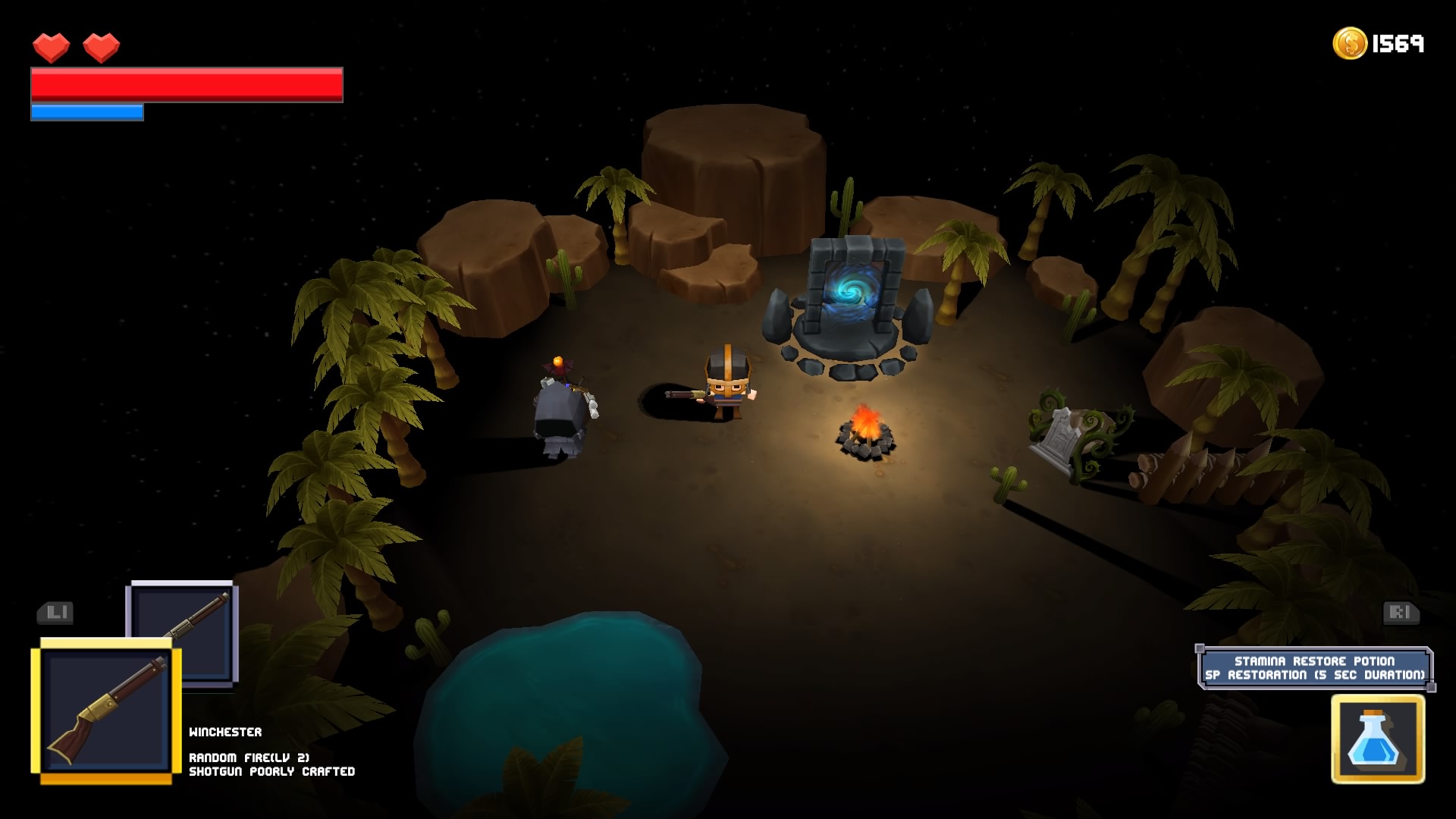 Overall it’s a good little title, that despite what might feel a bit too brutal at first, becomes an enjoyable rouge like once you find your feet. The small team responsible for creating this did a good job of making it simple enough to pick up, challenging enough to be enjoyable, and rewarding enough to continue playing. I would hope to see a suspended save added in a patch or the like, but overall I enjoyed my time with Survive! Mr Cube and would recommend it to people who enjoy the genre.