Blazblue is back again and this year it’s brought friends!, Persona 4, Under Night In-Birth and RWBY all join this latest entry in the series hoping to bring a little more to the table. Will you be crossing fate or crossing streams? Read on to find out. 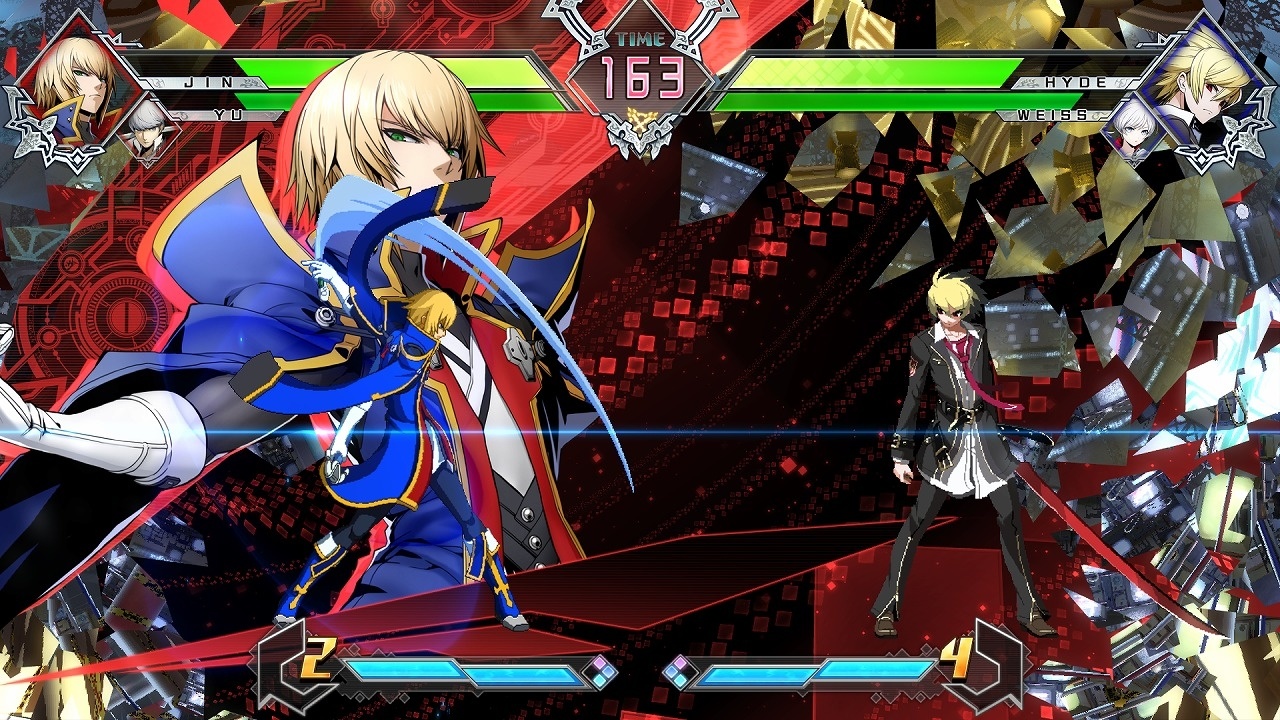 So as mentioned in my handy blurb, Blazblue: Cross Tag Battle is a cross over game featuring characters from Blazblue, Persona 4, Under Night In-Birth & RWBY. I would imagine most people are aware of at least the first two, Under Night In-Birth is an anime fighter we have covered previously HERE & RWBY is a popular anime/manga series from the recent few years.

If you aren’t familiar with any of the series on offer here or infact “Anime Fighting Games” in general, think Street Fighter, only flashier, faster and with a love of various “meters” everywhere and you’ll be golden.

Blazblue: Cross Tag Battle is a 2vs2 tag anime fighting game (See the above description), this puts it in the arena with titles such as Marvel vs Capcom: Infinite, Tekken Tag Tournament & Neo Geo Battle Coliseum. If I’m honest I have always preferred 2vs2 fighters over the more hectic 3vs3 fighters, I always find they have a better pace and less chaotic, fortunately Blazblue Cross Tag Battle fits into this niche nicely.

Being a Crossover fighter, Blazblue: Cross Tag Battle obviously has the struggle of having a roster with enough selling power to get people interested in it. For the most part Blazblue Cross Tag Battle manages this, for the most part. Despite having a healthy pool from each series to pull from, the roster mainly focuses on the Blazblue side of things, this means the other series despite having decent representation, have really strange feeling omissions. An example of these omissions is characters like Kanji & Naoto from the Persona 4 side, some of the quirkier characters in Under Night & even half of the main cast of RWBY. The kicker here being some of this will actually become playable, in the form of paid DLC. It’s something that was noted upon reveal of the full roster and still sticks out like a sore thumb in the finished product. 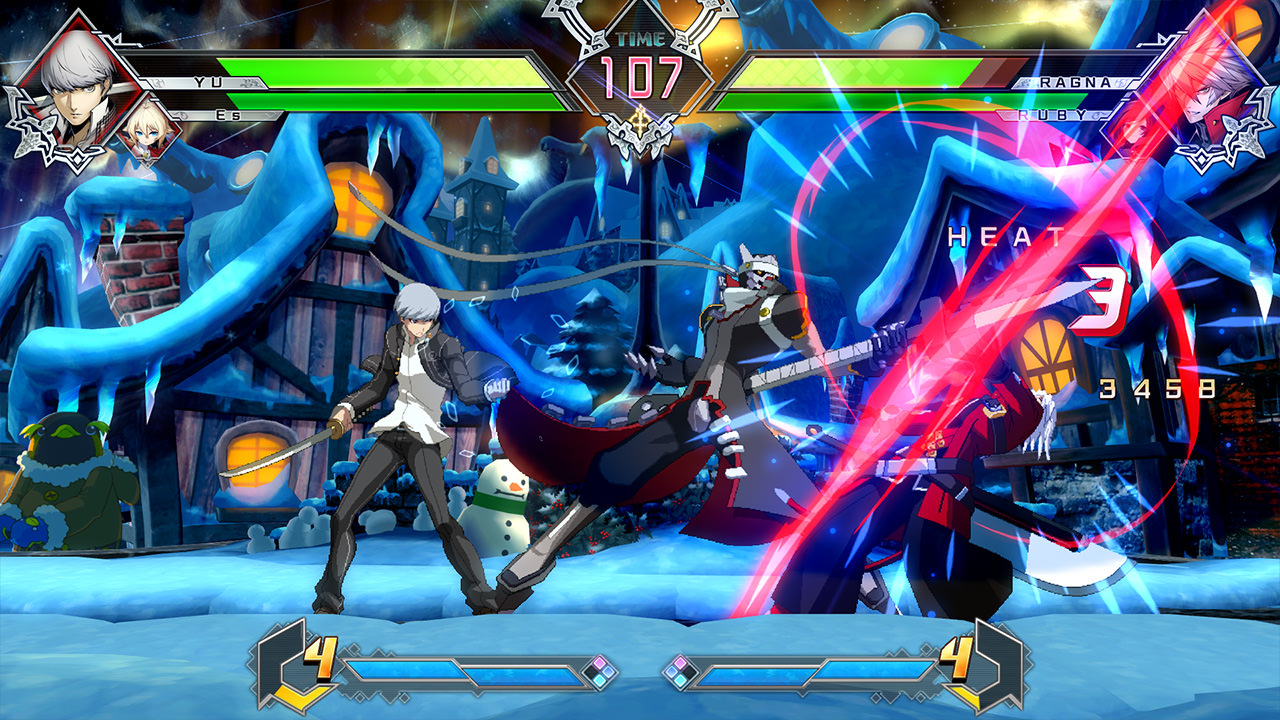 That’s not to say what is on offer is poor, far from it!, the RWBY characters look great (A little too good but I’ll touch on that next) and characters representing their series all suit the theme of the game, it’s just the omissions are a little too obvious in this case.

In regards to character art/animation, everything here is on the level and the characters look and move like they did in their series, bar the RWBY characters. As they never had a game in this arena before the RWBY characters are freshly drawn and compared to the rest of the cast you can tell. It’s not as obvious when the game is in motion but initially you can see the difference between them and the “Re-used assets”.

For the first time since Chronphantasma, Blazblue: Cross Tag Battle has an English dub and much like previous titles & Guilty Gear it’s of high quality!. Some of the characters do border on the “Pull my ears off quick” line such as Ruby & Platinum (She’s DLC!) but for the most part it’s good to hear our Ragna again, plus it’s the first time ever Under Night In-Birth has had an english dub.

The soundtrack is once again a fantastic mix of orchestrated, heavy metal and the toe tappingly pleasant Persona 4 goodness, some tracks are remixed and some of the more original tracks don’t feel out of place. This is one area Arc always nail with their games and take my word for it, they have done it again. 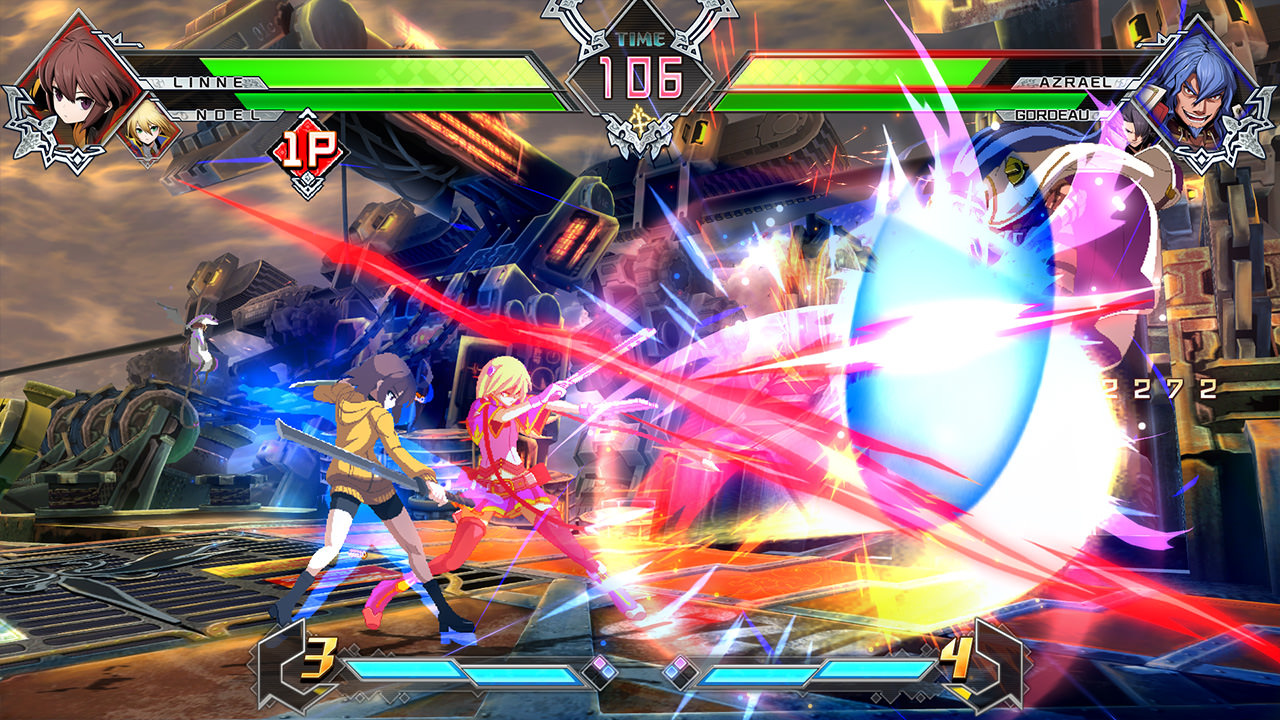 The core combat of Blazblue: Cross Tag Battle is fantastic and easily shot this game into my must play portion of my fighting game collection. As I’ve mentioned the pacing of battles is fantastic for a 2vs2 fighter, though some characters could benefit from a bit more health as some battle can end REAL quick.

The controls are easy to pick up and in typical Arc style the game has a fantastic tutorial to help you get the most out of your partner. I will point out that they have chosen to streamline button inputs and outright remove the “Drive” features from the Blazblue cast which can be quite jarring initially, fortunately the gameplay is very pick up and play. There are tones of options within combat, active tags, push blocking and a state where your character regenerates health faster and has an instant K.O move are just a few to mention. It can be alot to get your head around but spend a little time in that tutorial and you’ll be crossing fate like a pro in no time!. 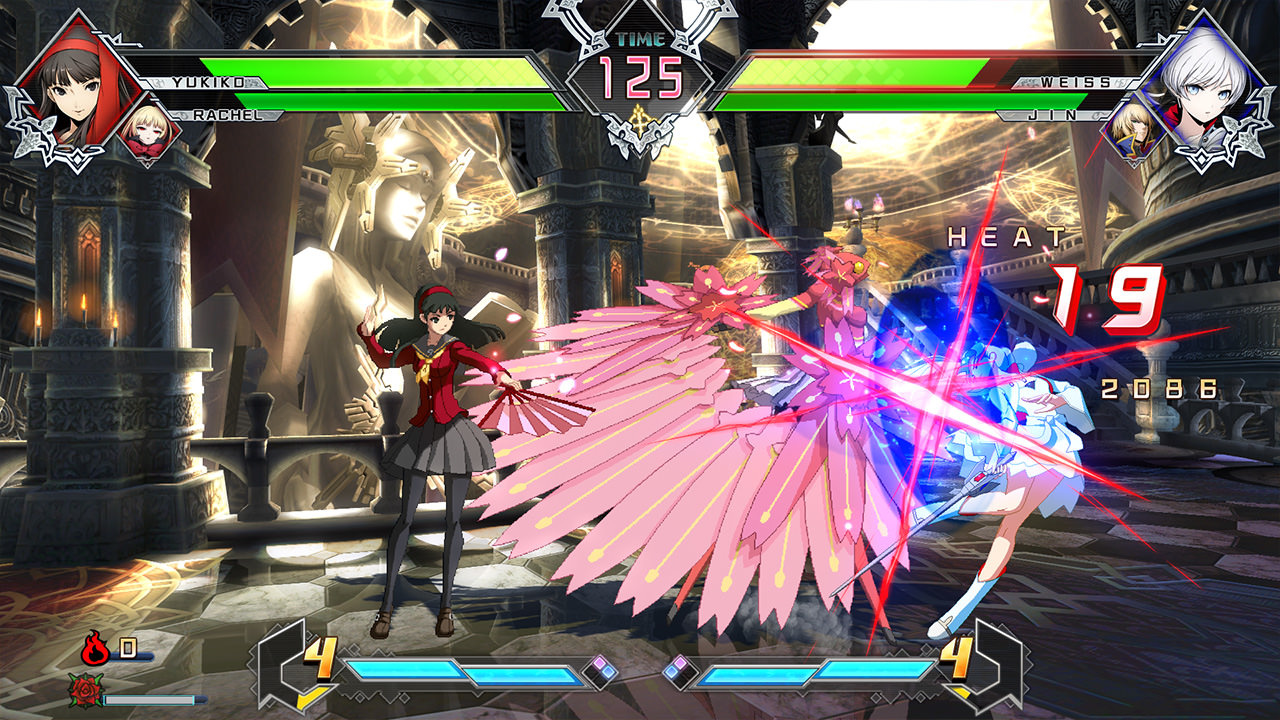 In terms of gameplay modes the game takes a little decline, there is no arcade mode!. There is an episodic story mode for each of the characters which can consume your time, especially the Blazblue route which typically requires several playthroughs to reach the full completion. There is also Survival mode which is your standard affair but I was let down with the lack of Arcade mode, especially after Blazblue: Central Fiction, Dragon Ball FighterZ & Guilty Gear -Rev2- really knocked it out of the park with theirs.

You can see Arc have really put the effort into the online side of the game, fully 3d Gaming lobbies with avatars and enough servers to shake several sticks at!. I had the chance to jump online on several servers and found the netcode to range from average to great depending on the other players connection and distance away, this should be better when the Europe servers start to fill on release.

One particular issue I had involved Rage Quitting, it was quite prevalent in all of my sessions and usually occurred when I had taken out an opponents “Ruby”, they would quit the game and it would freeze up for around 2 minutes. Obviously with this genre you’ll get rage quitting but the freeze I found affected my enjoyment even more and cut most of my online sessions short.

Overall Blazblue: Cross Tag Battle is a fantastic addition to the fighting game genre but feels like it may have come out of the oven a little too early. Day One DLC characters which appear in the campaign, re-used assets and lack of arcade mode do hamper the base product but not enough to distract you from the core of the game which is just as good as ever.

If you’re a fan of Anime Fighting games or even just curious and wanted a jumping in put, you’ll be hard pressed to find a finer one than this, it’s accessible for newbies and has enough depth to please your inner Daigo, I can only hope that Blazblue and Arc continue to “Cross fates” for the foreseeable!.