30 years ago, a young kung fu apprentice entered the World Warrior tournament to be the best around and beat the evil Sagat, nowadays he’s sorta dossing around, throwing out Dragon Punches and defying old man time with his rugged looks. Yes it’s Street Fighter 30th Anniversary Collection, so shall we see Howwedoken?.  I won’t do that again, read on World Warrior!.

Before I talk about the games, the main product features several additions for any fan or potential fan of the Street Fighter series. First off is the Online Play, five of the titles include the ability to play them online with other players around the world, more on that later on.

Other extras within the game include a rather in depth Museum, featuring a time-line, developer art works, music from all the games and even a frame viewer so you can see your favourite character & move in frame by frame glory.

The museum part of the game really shows that they poured alot of love into the title. It’s a complete joy as a Street Fighter fan to delve into the series history & it has the 3rd Strike Soundtrack in it’s full glory which is an instant double K.O in my book!.

What does Street Fighter 30th Anniversary Collection actually contain in terms of games? Well below is a list of the game included, please take not these are all the Arcade releases of the games, this will be important!. 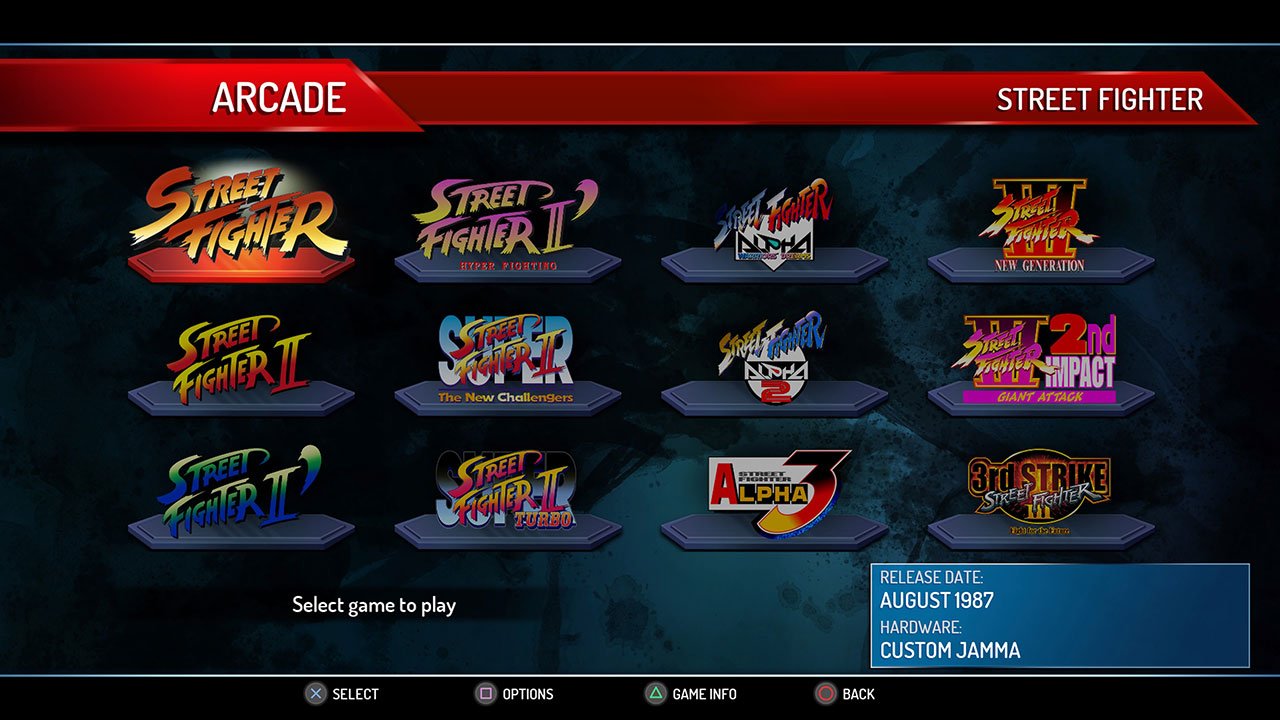 As you can see that’s a good chunk of Street Fighter, especially as it’s releasing a budget price, straight off the bat it sounds like a Perfect Victory am I right?, well for the most part that’s still true. Street Fighter 30th Anniversary Collection offers fantastic value for money but it could and should of had that little more to help it cater to a market who have been conditioned to have a few more bells and whistles than an Arcade mode.

When I say these are arcade perfect ports, I mean it, well for the most part. In terms of playable modes you get standard Arcade Mode & Versus, Alpha also had the SF II: The Animated Movie inspired “Dramatic Battle” of Ryu & Ken vs Bison.

This also affects the quality of the roster for some games, the main one being Alpha 3. As this is all the Arcade versions, console exclusive character aren’t there, most bosses aren’t playable or require a cheat & some versions are actually outdated such as Alpha 2 which received a much superior version at the Arcade.

Another bump when using the arcade ports is the glitches and balancing, everything that existed in the arcade release, is present in this one. This is especially apparent in online ranking, along with Akuma/Gouki being selectable via cheat code despite being very OP and banned from tournament play (SSF2).

Despite these knocks, for the most part every game on this compilation is still fantastic. Obviously Street Fighter 1 isn’t going to be your go-to game but it’s amazing to see how Street Fighter II, Alpha and III evolved.

Each game remains insanely replayable with it’s arcade charm, There are options to tweak your experience such as visual filters and a difficulty switch to tone down that harsh Arcade “A.I”.

The day one patch of the game also includes a rather in depth training mode for the games which is a much welcome feature and allows you to practice combos and timing for when you take the game online.

So personally speaking, one of the biggest selling points for me was the ability to play the games online, mainly Street Fighter III: 3rd Strike. Now I’ve tried the reviewed version (X Box One), PlayStation 4 & Nintendo Switch, the Netcode on all of these versions varied but none of them ever played well for me at the time of writing.

Issues from major lag, games randomly disconnecting, unable to accept invites to lobbies and a puzzling one where a player would “Ready up” and it would “ready up” every other player in the lobby but them. It’s a shame as the new choose a game lobby system is great and keeps longer sessions fresh by allowing people to pick a different Street Fighter, unfortunately as it stands the online side really sullies the product for me.

Street Fighter 30th Anniversary Collection has easily been one of my most anticipated titles of the year & the fact I got the chance to review it really meant something to me. Initially the lack of content due to the arcade ports is jarring but you’re soon trying to beat your High Score or deal with the devil known as Street Fighter 1. The online mode was where I really needed the product to shine and so far it’s fairly dulled due to bad netcode, once this is patched I’ll have no qualms about awarding the game a higher score, as it stands old bugs and bad net code really hamper this celebration!.