Conan Exiles is the latest title in the Conan the Barbarian series, famous for some fantastic films, comics, stories and a mixed bag of games. Hoping to finally put his beastly mark on the world of gaming, Conan once again steps up. Is this worthy of lofty praise or should it be exiled for it’s crimes against gaming?.

From the get go I must mention that our hero Conan, well he makes an appearance in the intro and then does one to god knows where.

Rather than tying you into the shoes of everyone’s favourite head splitter, instead the licence is based more around the world and lore created in the Conan the Barbarian series. This could be a deal breaker for some so it’s worth getting that out of the way.

So what is Conan Exiles?, well it’s a survival game, much like titles such as H1Z1, Ark, Minecraft & 7 Days to Die, only this time it has Nudity, vicious combat & rivers of the red stuff.

Graphically Conan Exiles looks fantastic, the different areas of the large map are all easily noteable for their different features, especially the Jungle Area. Animations on the characters can be a little hit or miss, sometime animals refuse to animate full stop and the A.I works on a basic level meaning the world doesn’t really feel “Alive” at the moment. 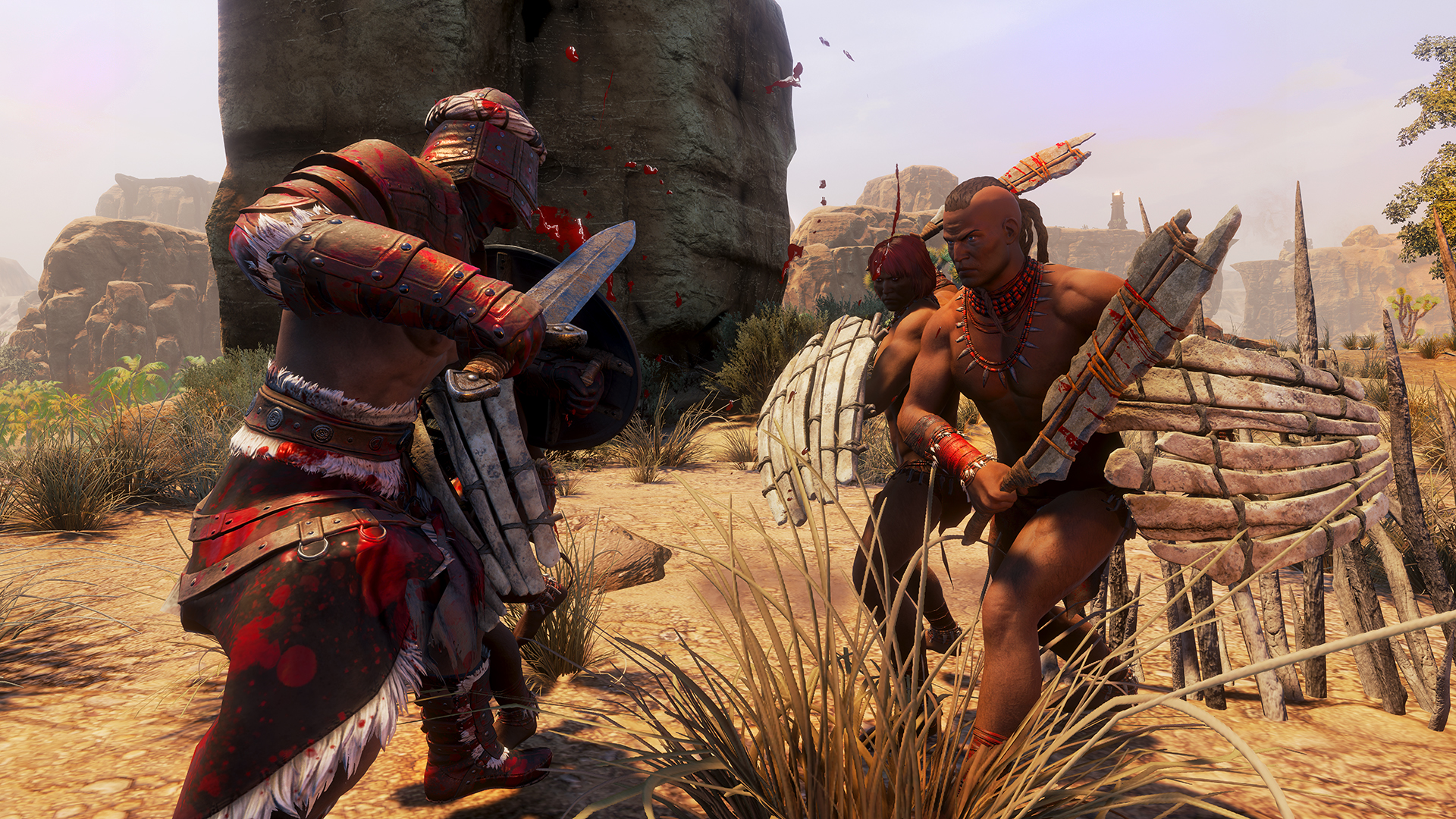 Conan Exiles features some fantastic audio work, you can differentiate between the many, many different creatures that inhabit the land. The ambient sound is also brilliant and the music when a horde is descending on you is beautifully tense. Sounds and looks ok, but how does it play?. Well if you’re familiar with titles mentioned above then you’ll have the basic idea. If not allow me to take you through the first few hours of Conan Exiles.

Once you’ve finished creating your Exile, Conan will take you off the cross and leave you to your own devices within the desert. It’s a fantastically brutal opening and one that easily encapsulates where the game is going. You’ll cross the Desert, hopefully finding the note and Waterskin left for you, You’ll notice that you can complete “Quests”, these edge you into learning the games systems, such as crafting, building, fighting and climbing.

Once you’ve done a few of these missions you’ll no doubt head into the stats screen, here you’ll be able to build your character to your specifications. Moving along you’ll see all the different crafting options you can unlock, it’s worth having a plan going forward from the get go so you can get what you want quicker I.E Swords. 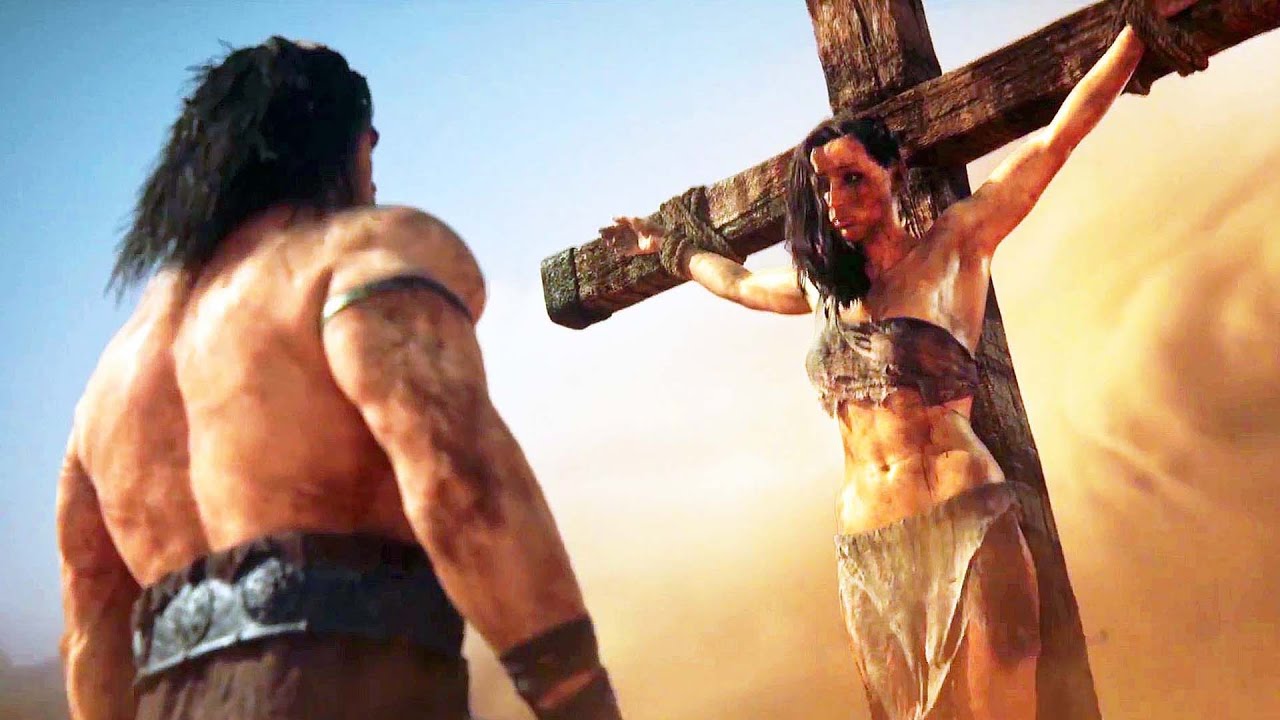 By now you’ve reached The River, you should have an inventory full of Sticks, Stone & Plant Fibers, after working through the crafting options and fighting the controls you should start planning to make a Shelter. Depending on difficulty played on &/Or if you’re online on a PvP or PvE server determines the speed you should build a home, there are vicious sandstorms on the way & they can & will rip through your health bar in seconds.

The building system can be quite a finicky pain, sometimes stuff just won’t snap onto where you want it to or terrain just won’t play nice, as with most things in this game, a little time with it irons out most of the annoyances.

During all this building you’ll want to fight some animals for meat & gather some water to keep that thirst and hunger meter at bay. The combat while on the more basic side does have some bite to it and especially when you finish someone with a heavy attack and you see them reduced to a bloody mass. 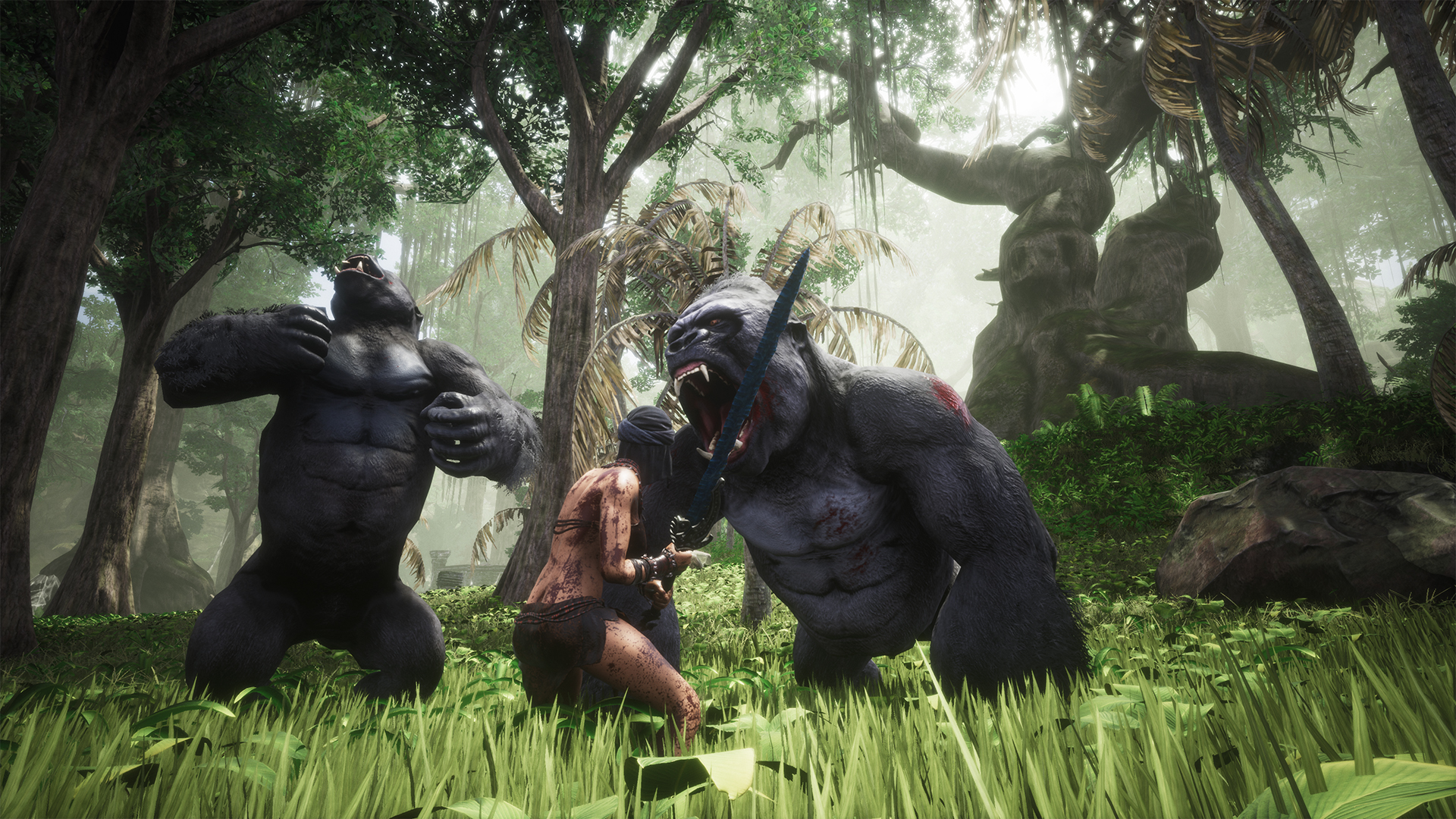 Now if you’re anything like me, you’ve possibly restarted already as you’ve tried to kill things with a hatchet (note – used for gathering) OR fumbled with the quick menu and given yourself food poisoning and died on the River, Conan Exiles is one of those games that requires you read up on it’s different features, have prior knowledge of the genre or you struggle for hours on end till all of sudden everything clicks and you start immersing yourself in the hardships of being an Exile.

Other factors include a meter which builds with combat overtime and sends an army to your base to fight off, the ability to summon gods to help wreck foes, bits of lore hidden around the map & the ability to kidnap NPC characters, put them on the iconic Wheel of Pain and have them join your settlement & thus your army.

There is alot going on in Conan Exiles & it honestly feels off to be reviewing it this early in the day for it. I have put around 40 hours into it over Single Player & PvP in both an official and a player owned Server. The official server was the standard gameplay but the player one had everything turned up and thus shifted focus more onto who can build the biggest base. It’s interesting how little changes can totally switch up the endgame and something I hope the developers really look further into going forward.

I enjoyed my time in Conan Exiles and no doubt will be dropping in when I can find the time to see how the game evolves, I must say the grind focused, survival gameplay isn’t usually my cup of tea but here the world and fun I had it combat sort of offset that somewhat.

I do have to say it is still really grindy, even on Easy on Single Player, if you want the better equipment then you’re gonna have to start working for it. I believe there are also high level dungeons scattered around the world too to conquer but as of yet I haven’t quite reached that level.

Conan Exiles is a fun timesink once you get past it’s grindfest nature and it’s at times wonky control system. It may not be “THE” Conan game people are after but it does some great work with the licence and is more than happy to treat you like it’s Thrall for your playtime.