Dark Rose Valkyrie is the latest Compile Heart Jrpg to see a release on the PC via Steam. What sets this apart from most other games from the developer is that it features input from staff that worked on the Tales of series, notably character designer Kosuke Fujishima and scenario writer Takumi Miyajima. Does this do enough to set the game apart within Compile Hearts large roster of Jrpg releases? And has IFI continued their recent good work porting to PC? Lets find out… 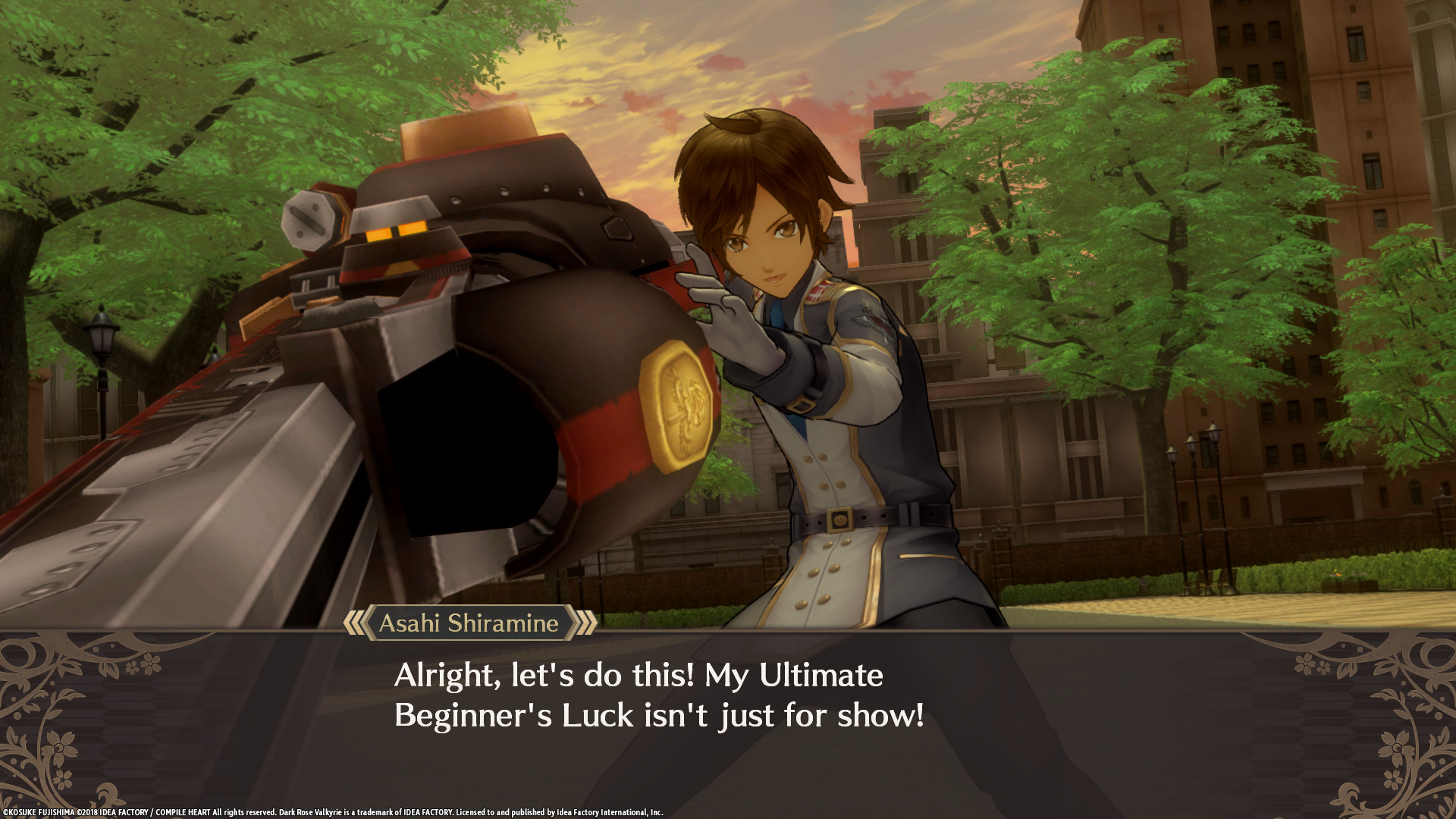 Dark Rose Valkyrie is set within an alternate universe during 1920’s Japan with the nation having to deal with the repercussions of fallen meteorite that unleashed terror – in the form of the Chimera virus. You take on the role of Asahi, a fresh captain that will be heading up the newly formed Special Force Valkyrie. Once all the introductions are done with your new squad, command fills you in on your mission. Eradicate the Chimera-infected people to stop the spread of the virus. That isn’t all you’ll be doing, as you gradually begin to discover.

The story for this is actually good. Your interactions with the numerous characters and how they feel towards you can actually change the outcome of just who the traitor will be, which changes the ending etc for the game. Each character has their own personality, so it does become a juggling act making sure you choose the right response with each one. The story segments of the game are actually shorter than usual, you won’t be spending 10 minutes plus staring at the sprites interacting, which is a welcomed surprise. It does take some time for things to get interesting though. The first 2-3 hours of the game can feel like a chore, there’s also Compile Hearts ubiquitous first hour tutorial slide hammering, and the way the story progresses can lead to frustrating moments – but it is worth sticking it out. 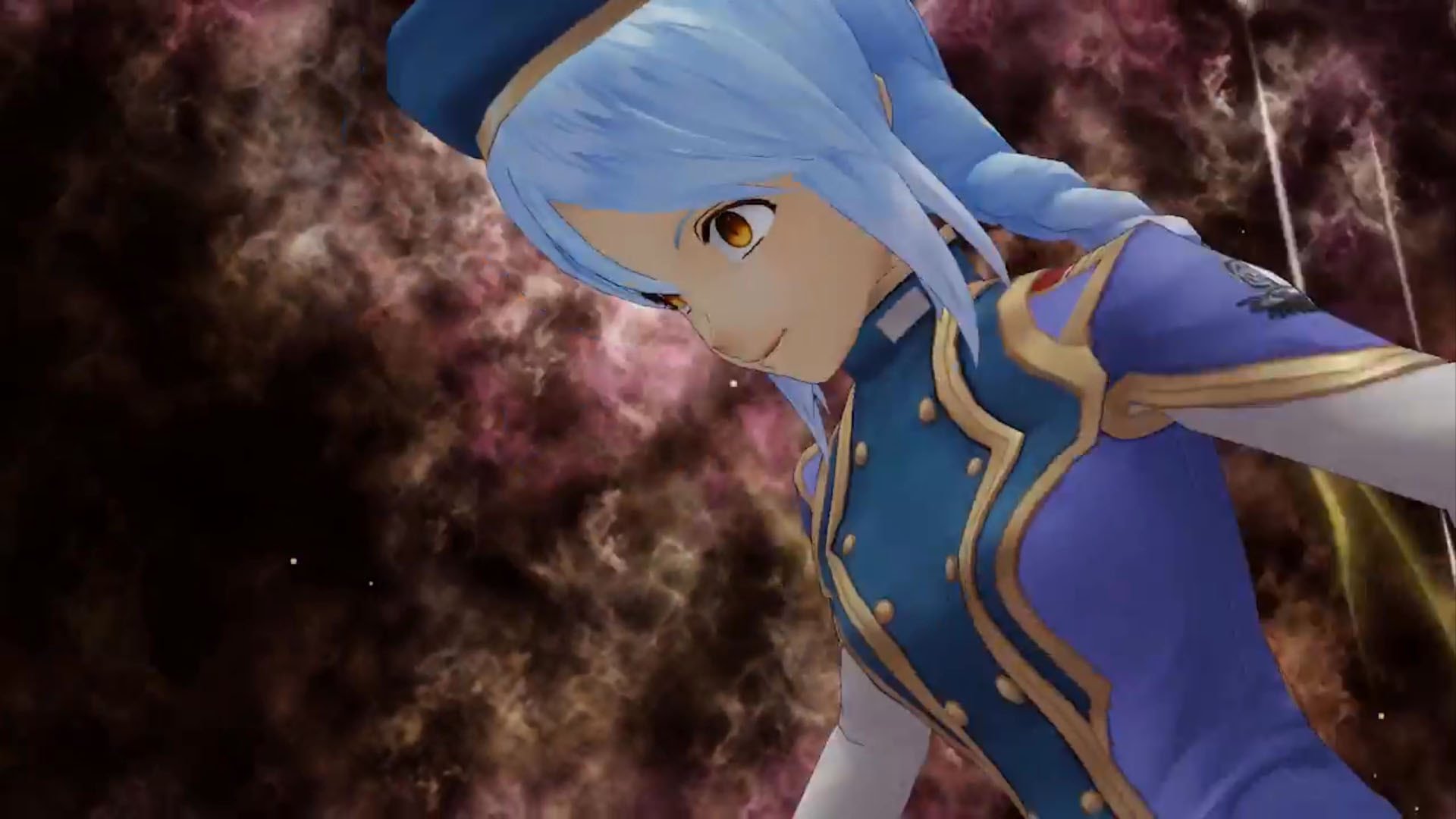 Having some designers on the roster for this release that worked on the Tales of series means you may notice their work easily. Character designs in particular are styled differently to most other Compile Heart games which makes for a nice change. The game makes use of Live 2D as well which gives the sprites during dialogue minor animations that helps with their uniqueness in the roster, no two characters in your squad are the same. Compile Heart are flexing a bit on this release, though its not as good as the Neptunia releases – likely due to the darker theme. Dungeons generally look good, some even look great, and a surprising amount of post processing is applied to good effect. The audio is decent too, fitting for the game without doing much else. Luckily full voice audio is present, with English & Japanese available to give the user some choice.

One aspect of waiting for a PC release of Compile Heart RPG’s is that it gives you the opportunity to smooth out performance and dial up the resolutions for some razor sharp moe over the console offering. Here that’s not quite the case. Ok, it’s not the case at all. Granted you can run the game at 60 fps, but it never stays there – regardless of the resolution or setting tweaks you try. It seems to suffer from clockwork like stutter, momentary fps drops every few seconds, that can become a nuisance. Even running the game at 720p with Vsync on or off  on my system (R51600/16GB/Fury Nano) didn’t alleviate the problem. Considering the Ps4 version only dropped frames around the city hub, it’s a shame to see this issue crop up across the entire game on PC. Not even the dialogue sections are free of it. To be honest the review was held back a few days in case a release day patch was issued to optimise the game, but nothing has arrived and it continues to perform as it did during Beta. This could potentially not bother you or you could run the game at 30hz to get around it, but considering I’ve praised IFI for the last few ports I’ve looked at as they seemed to be improving, Dark Rose Valkyrie marks a couple of steps back in port quality unfortunately. 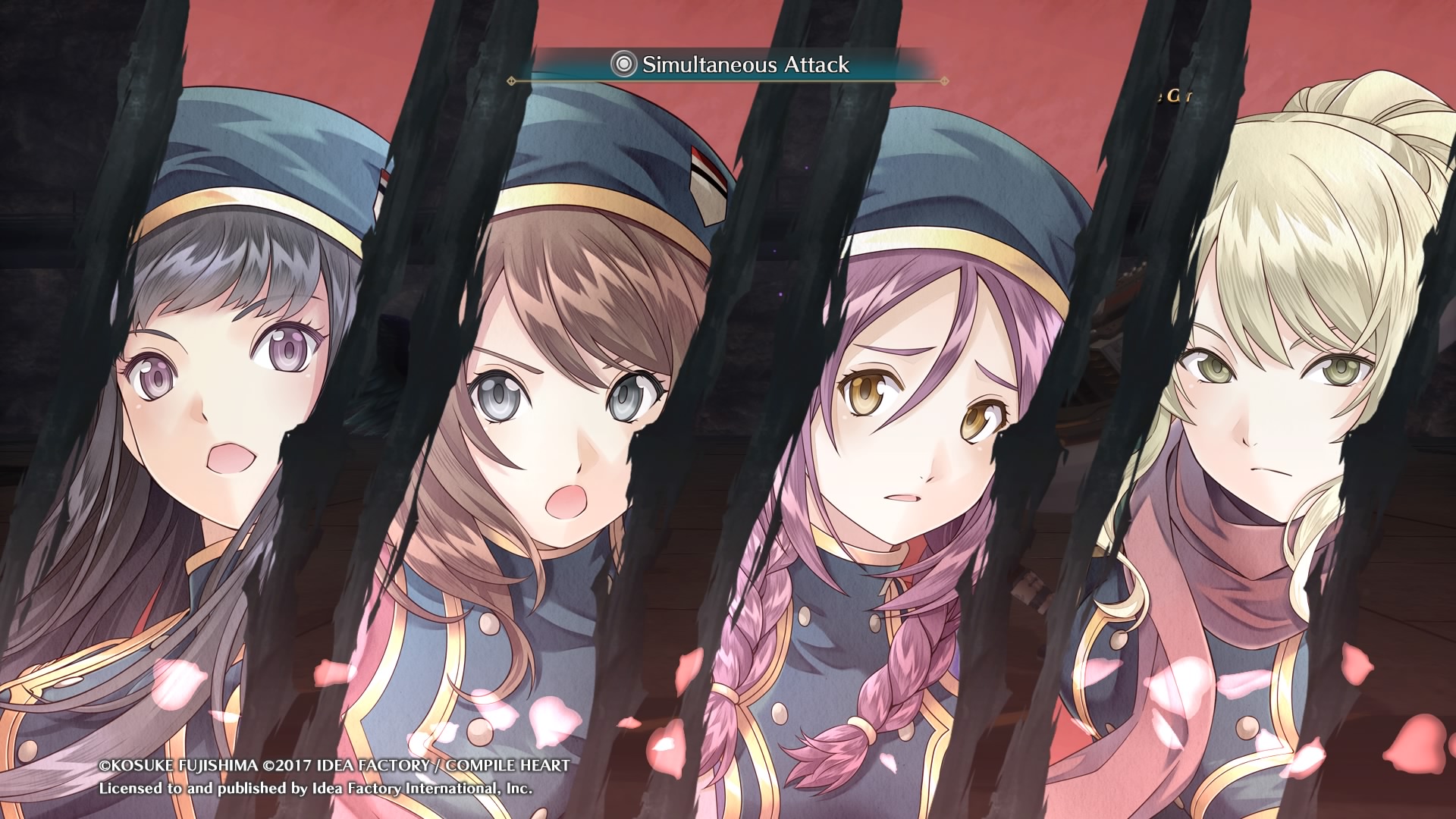 Surprisingly, the in-game battles are probably the games strongest aspect of the game. There’s still a turn based system in place, but it now also runs on time basis. Up the left of the screen is a line that you’ll notice friendly & enemy counters moving up. Once near the top you choose your attack etc and it’ll activate at Level 1,2 or 3 – The counter then cycles to the bottom. Strategy comes into play as attacks will stop the counters whilst others continue to move. Do you split your forces up to slow the enemy advance? Or do you focus on suppressing & eliminating the biggest foe in front of you? The rest of the game is similar to other Compile Heart RPG’s as you’ll find the usual researching and development aspect for you items & weapons. The cloth break also does more than just give a visual indication of damage, the more damage to your clothes – the less protection it offers. It may be nice checking out your waifu in their underwear, but its best to return to the hub and get the clothes repaired regularly. You can even create new uniforms from blueprints found during your adventure, such as a reward for completing missions & quests.

The mission based way of story progression can become frustrating at occasions though. They are not always explained well and can leave you running around the same dungeon for a while with a vague idea of what to do – usually forcing a facepalm once you figure it out. You’re required to do these as well, all of them, as there’s always more than a few to do at once – though it’s usually only one in the bulk that can be annoying. They can stifle the story if you become invested in it enough, so best be mindful of what lies ahead. 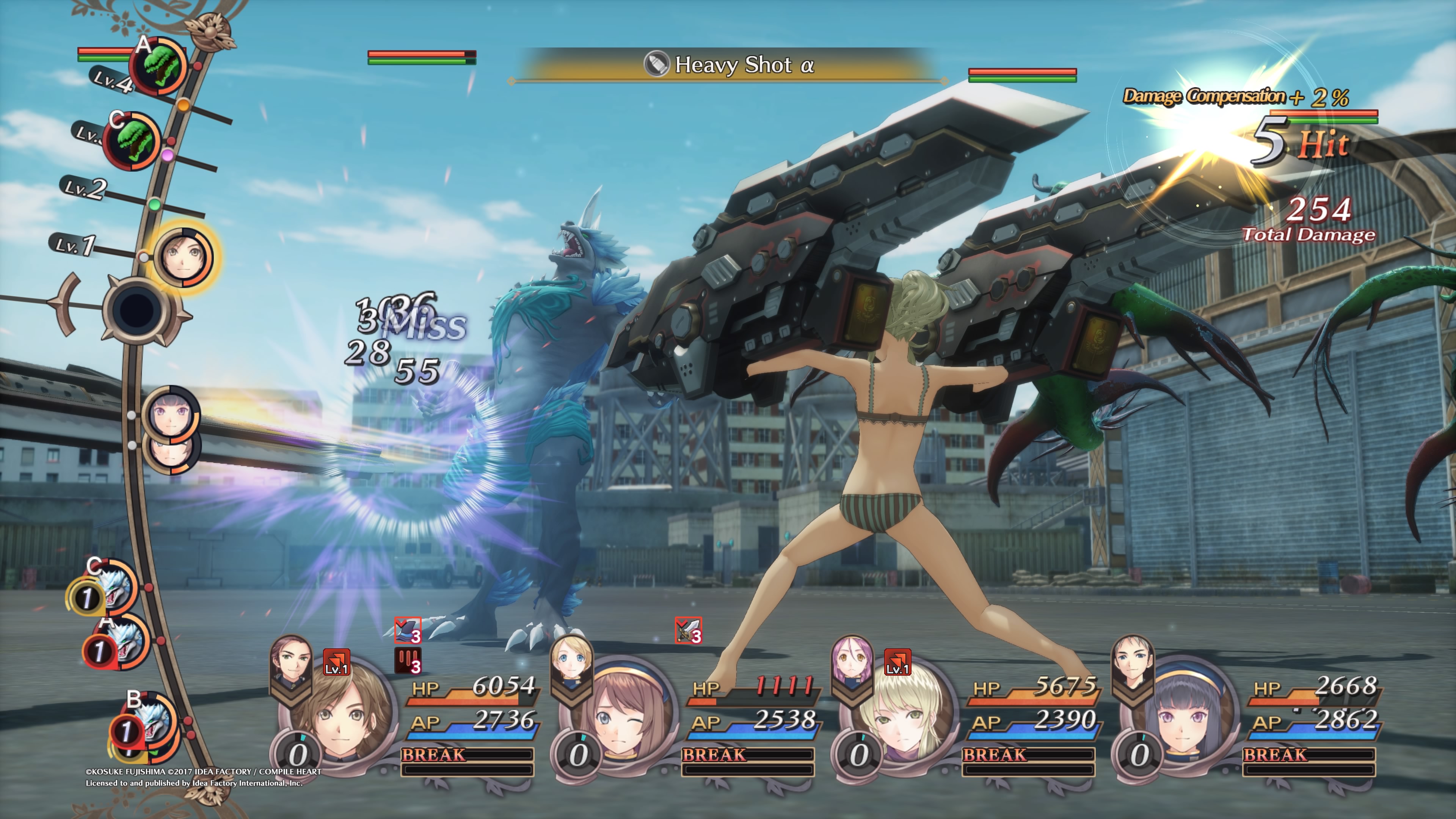 Dark Rose Valkyrie is a decent Jrpg that one can become heavily invested in, especially as you build relationships, and the tweaks to a typical turn based formula helps things feel a little fresh. The big elephant in the room for this port though is performance. Flying in the face of good work from IFI recently, performance is pretty bad regardless of hardware or settings applied with clockwork like stutter throughout the game. There’s definitely a decent game here if you can get past the issue or IFI decide to fix it, but I’d recommend holding off on a purchase for now or seeking out the Ps4 version if possible.