Cyberdimension Neptunia: 4 Goddesses Online is the latest release in the Hyperdimension Neptunia series to make its way to PC, as a collaboration between series stalwarts Tamsoft & Compile Heart looks to bring fans an MMO-esque adventure as the goddesses partake in a little Beta testing. Will everything be as simple as it sounds for our heroines? and are there tangible benefits to this PC release? Lets take a look. 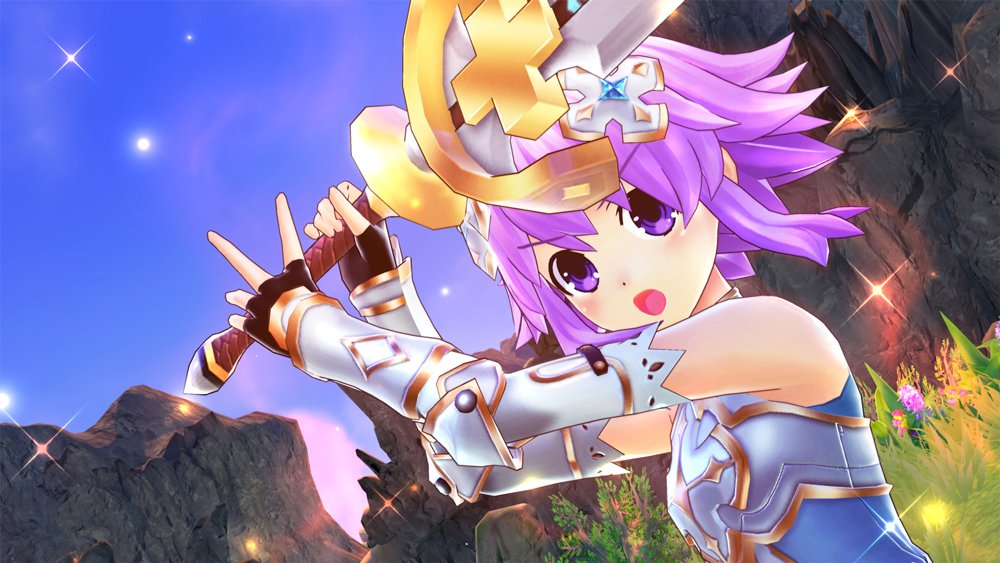 The Goddesses (Neptune, Noire, Blanc, and Vert) have been selected to be beta testers for the new version of a popular online game. Upon meeting up within the world of Alsgard, the girls are quickly greeted by Bouquet – an AI assistant (or guardian spirit) tasked with helping all new adventurers. The goddesses are told they are the chosen ones and have been tasked with collecting the 4 trinkets needed to revive the goddesses of this world. Their revival is needed as danger looms over the land due to the return of the villainous Demon King.

You play as the goddesses & candidates as they play a game, which doesn’t sound so odd when you consider this is a Hyperdimension Neptunia game. The standard roster forms the core of the story for this release, but that doesn’t mean others are left out. Quite a few characters from spin-offs make cameos which should delight long time fans, and there’s some new characters as well. The story is told in the typical way with visual novel style dialogue, though the Live 2D of Compile Heart releases is gone. The sprites aren’t animated as much as a consequence so these sections don’t seem as lively at first, but there’s plenty more reactions to try and mask this. As with VII there are a some cutscenes using the in-game engine and these look better than ever with more detail & animation. If you want to take a break from the story tho the game does offer up some multiplayer. This comes in the form of 4 player co-op dungeon crawling, with the rewards scaling well with the difficulty. There’s some good loot to be had when playing with friends and it does offer some extra longevity. 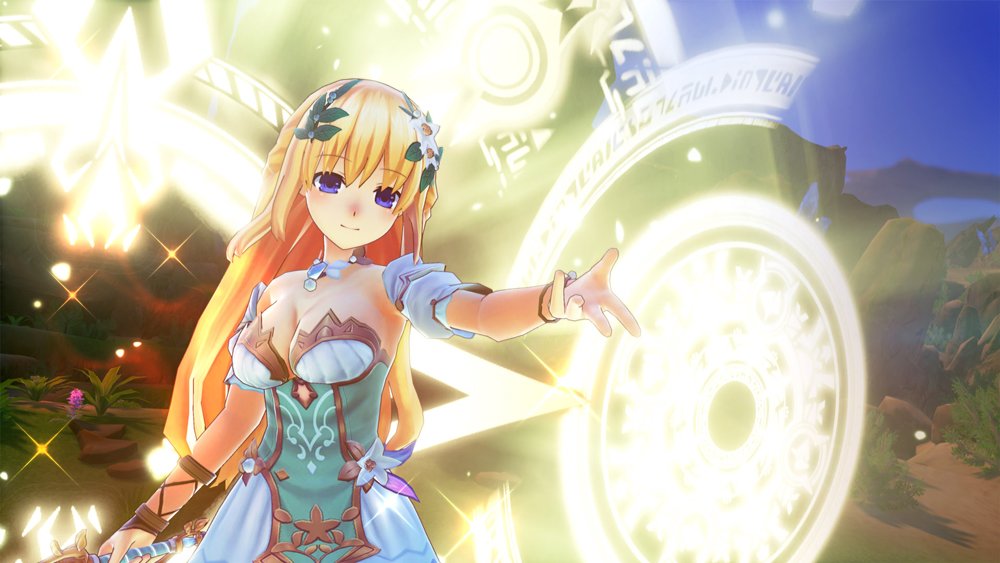 The first thing you’ll notice about the game is the sizeable graphical upgrade over those Neptunia releases that have come before, even Victory II on Ps4 & PC. It’s easy to see why once you realise the switch to Unreal Engine 4 and the moe is all the better for it. The upgrade hits you straight away as you’re dropped into the first area that features plenty of lush scenery. The vista’s stretch out, plenty of foliage, long grass that blows in the wind and the lighting is certainly a step up – and that’s just the environments. Character models are improved a little too, with some goodies added by the engine to animate clothing & hair. There’s also some new enemy designs alongside the usual returning fodder, though these look better than ever due to the improved lighting & shading. The audio side of things is business as usual for the series, with the optional dub complimenting the games liberal use of recorded dialogue.

The original Ps4 release suffered from some framerate woes, which is easily fixed due to the more powerful hardware and customisable settings offered on PC. My system (R5 1600/16GB/Fury Nano) saw good returns with regards to performance over the console release when running at 4K maximum settings. The opening tutorial stage is a resource hog for sure still, framerate hobbled around 45-50, but stages after that have higher performance. For the most part you’re looking at 4k 50-60fps on similar hardware, to get a locked 60fps requires but a simple drop of screen resolution setting from 4 to 3. You’ll lose a bit of clarity but boost performance whilst still running max settings. Personally I left this at 4, the game runs twice as good as on Ps4 as it is and the resolution boost really allows the likes of Nep Nep to shine at her brightest. The game wouldn’t boot on my laptop, similar to the previous Ps4 port in Megadimension Neptunia VII, but even more modest hardware to my own should be able to get better than console performance with similar visuals to the Ps4 on this latest port. 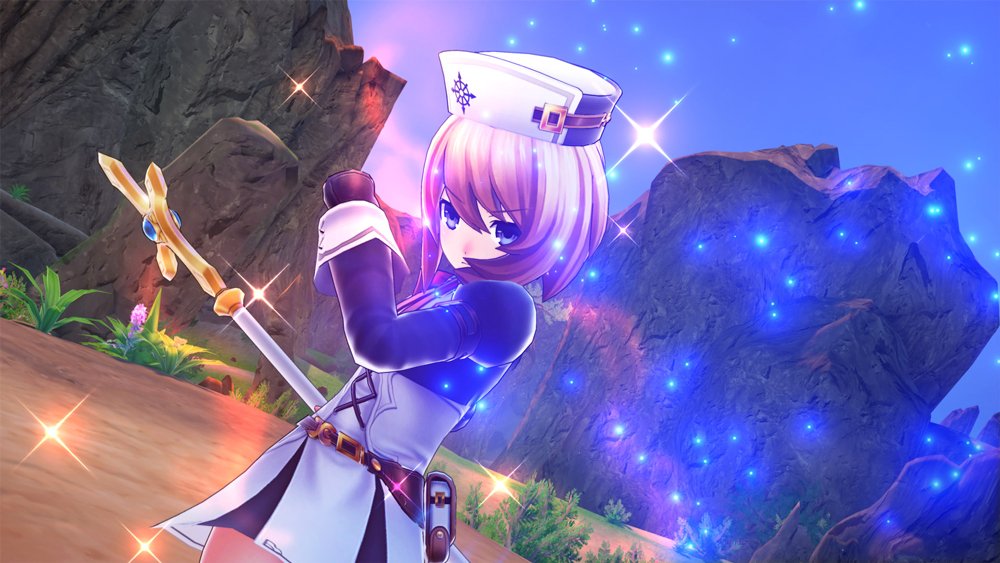 With this release being a collaboration between Tamsoft & Compile Heart, it incorporates elements both developers are known for. Combat is strictly action based, as you would expect of Tamsoft, which is fast based and includes the likes of dashing to give it more of a hack & slash feel. RPG elements come in the form of abilities and the break system, which you tend to find in Neptunia Jrpg’s. Almost all other aspects of the game are Compile Heart with the game structured just like a typical release in the series with a few twists. Most of the tweaks come in weapon & equipment building, as the numerous oddities dropped by defeated foes can now be used at the Blacksmith. Here new equipment can be crafted or improved upon using the many items collected during a dungeon run, and it’s something you’ll need to do regularly. There’s also gems that can be procured or purchased, and these augment the abilities of your party members. You can play as each of the goddesses and candidates, with each having a different role. This allows for a lot of variation in abilities and play style, as well as tactically putting together the best party for the situation. The girls can also be customised further via the loot found that offers more costumes and weapons.

Controller & Keyboard options are offered with regards to control on PC. Plugging in a X360/One controller automatically maps controls & prompts for the quickest route, gameplay probably makes a controller the best option – but keyboard controls are fully customisable if you want to use one. Personally I use a Steam controller and that just worked well enough on the default gamepad controls, though camera rotation was a tad iffy so will need some work on getting that right.

I previously mentioned a loot system, but don’t be expecting shiny trinkets of worthlessness falling from almost every foe that you slay. You may get the odd loot from a strong enemy, but most will be found within locked treasure chests spread around the dungeon. The keys for these are usually dropped by enemies or given as rewards when completing quests. Better loot can be had online as the ramp up in difficulty should be rewarded in kind, but going in unprepared or with an unbalanced team can make the game a slog. That’s the biggest problem with the game really, it doesn’t half feel like a slog at times when you’re stuck battling through a tough dungeon to reach a quest objective. Sure there’s abilities and the like to mix things up, but for the most part you can get through by just bashing the attack button. I guess you could say they’ve at least nailed the feel of an MMO.

The latest Neptunia port to make it to PC continues the steady progress from IFI on each PC release, with this offering a marked improvement over the console release in regards to being able to offer better performance. Fans of the series on PC will certainly enjoy Cyberdimension Neptunia, the ditching of turn based combat for a fluid action RPG combat system goes some way into aiding that enjoyment – especially if you enjoyed the likes of Neptunia U & Blanc Vs Zombies but wanted a fuller experience.

As the game is a PS4 port, some aspects of this review have been brought over from the PS4 review and updated accordingly.