Bleed 2 has finally made it’s way to consoles on the games anniversary, with a release last year on PC during February. Developed by Ian Campbell, with console porting duties handled by Nephilim Game Studios, the game looks to offer a fast & frantic old school experience. Does it deliver? Lets find out…

Bleed 2 see you taking on the role of Wyrn, the worlds greatest and last hero, as you take on a new alien invasion and fight to prevent the conquest of earth. That’s about it for the story, there’s nothing like a philosophical leaning or soul searching heroic monologue to speak of, the story exists to set to keep things chugging along in that mode and can be done in a single sitting. The difficulty mixes things up a little if you return, but it’s the other modes that interest. Arcade plays exactly like it sounds, with only a single life available through the story & your final score being uploaded – just like in the arcades. A few other modes are available too that offer variations on the gameplay, but Endless is one that may interest as it sees you fighting through randomly generated levels until finally defeated. One great addition to the game though is a 2 player mode. Having a friend drop in to offer some support, alongside unlocking extra weapons & abilities, can certainly help as you progress through the games various modes. 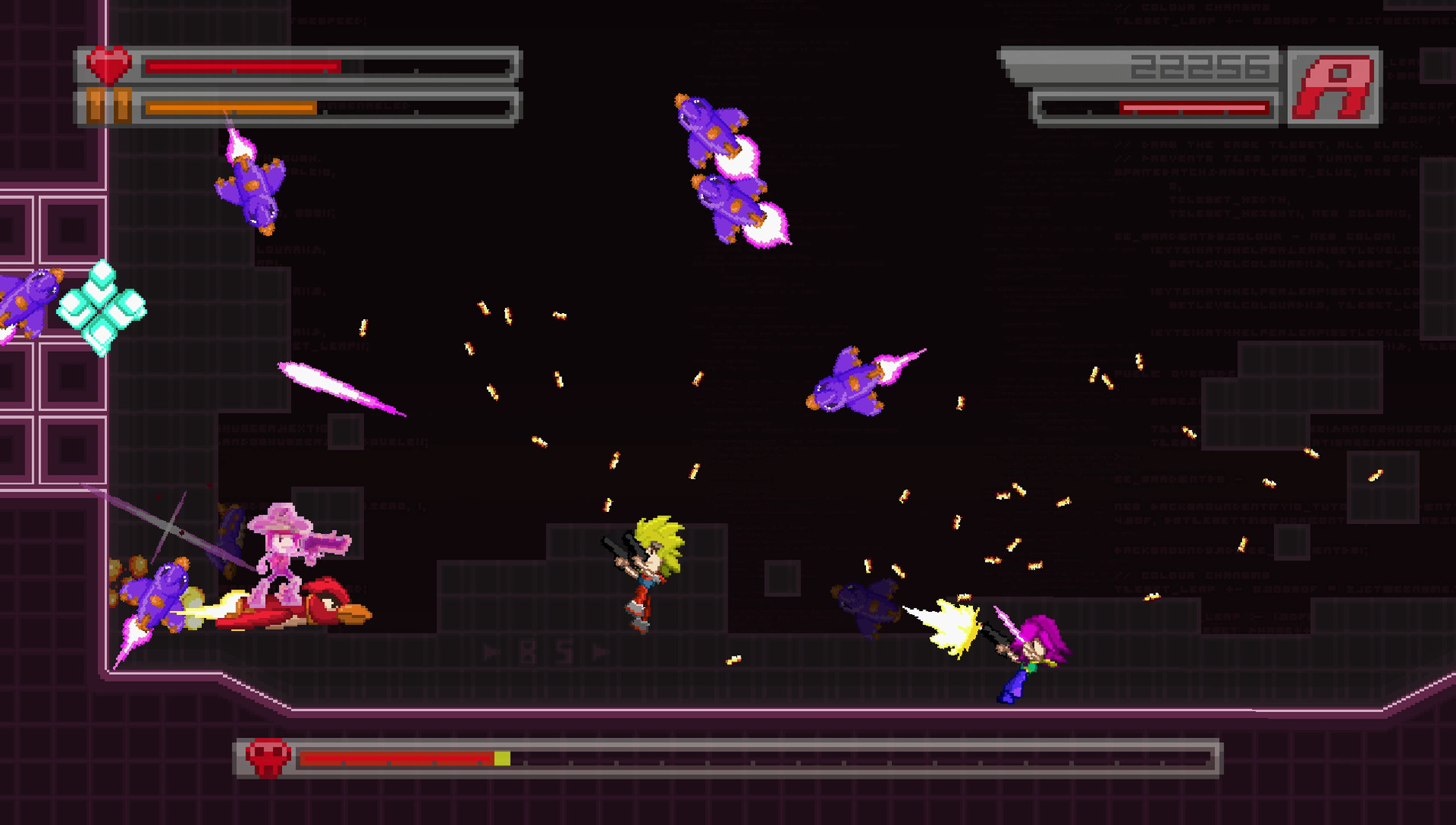 Bleed 2 offers up some good old fashioned 8-Bit styled graphics in a Saturday morning cartoon style that’s certainly pleasing on the eye. If you like 2D pixilated graphics then you’ll love this as there’s plenty of variety in the character and stage designs. Backdrops in particular can look quite nice, be it rolling clouds or sweeping cityscapes – there’s also the odd bit of atmospheric lighting etc to add extra depth to the scenes. As you would expect given the games 2D nature, framerate is rock solid. The game was played on Ps4 Pro with Boost mode activated, but I can’t see things being any different on the base model. There’s one area this game really shines in though and that is the sound design, in particular the music. Featuring an original soundtrack by Jukio Kallio, the different tracks for each stage is a treat to the ears. Not only that but it fits the games on-screen action perfectly and gives a sense of urging you on with its fast tempo. 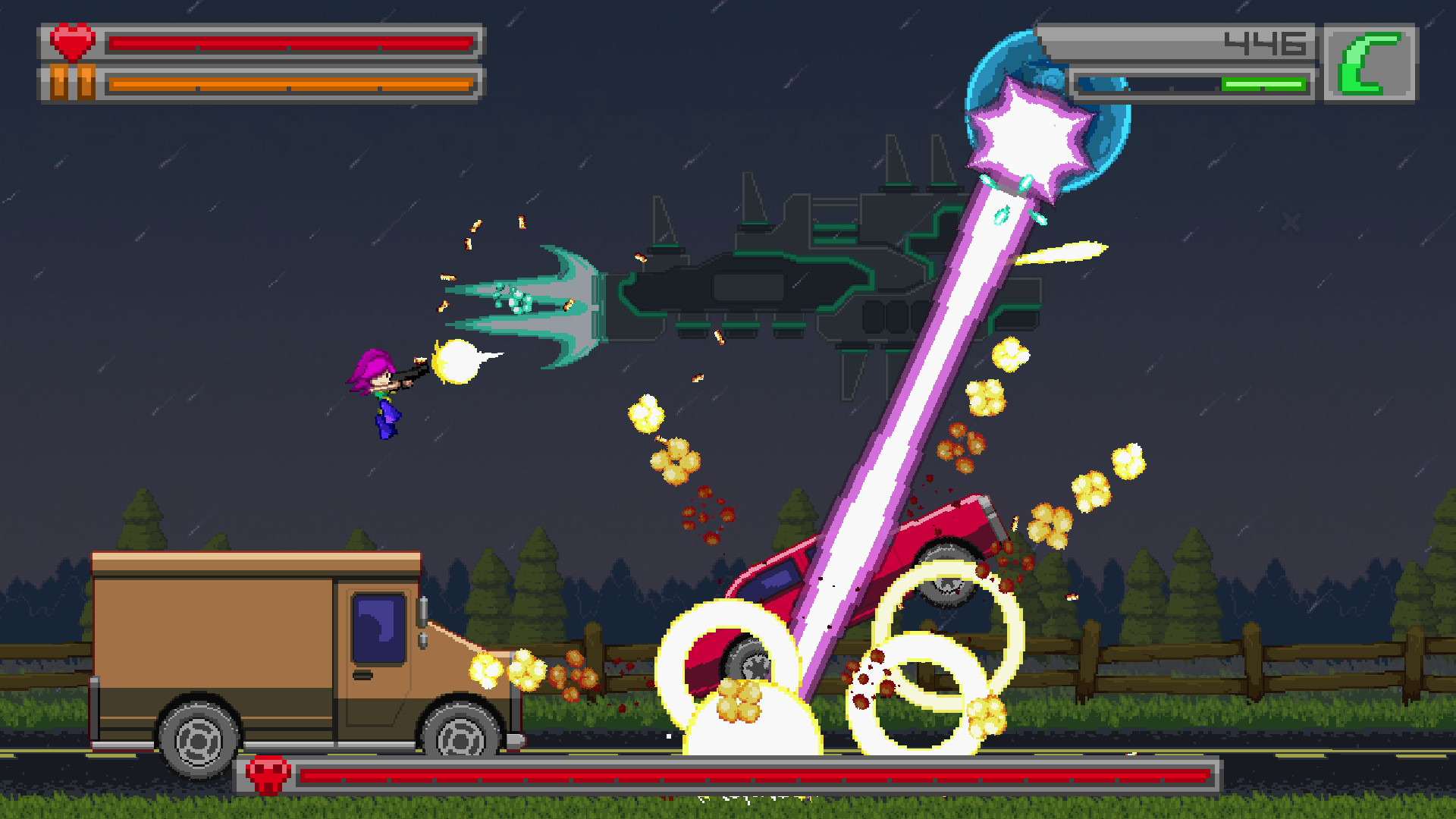 There’s only one word to really describe how Bleed 2 plays, and that is relentless. Aside from a minor breather at the beginning and end of a stage, everything in between just flashes by in a jiffy. The game is primarily a side scrolling action shooter, but most of the time you’ll feel like you are in a bullet hell shmup. There’s plenty of enemies blasting all manner of projectiles at you during a stage but that doesn’t mean you can’t deal with it. Some abilities are open to you which helps, with the first you get to grips with being able to perform multiple jumps in succession. This comes in handy when the bullets start to, with another ability in being able to slow down time certainly making for a good combo in dodging incoming fire. Another option in dealing with those pesky projectiles is to simply them. You’ll have to keep an eye out for purple coloured fire to deflect, but this can also make for a good offensive option too. Tough enemy got you pinned down? Just send a missile back at them. The direction of your analogue push dictates the direction and you’ll quickly learn to utilise this in the heavier bouts to gain the edge. Overall its a fun and intense game to play, with the only real caveat being that it can seem a little overwhelming at times. Funnily enough the boss battles aren’t so bad once you figure out the routine, but certain areas leading up to them can seem insurmountable. Sometimes you’ll feel frustrated as you’re backed into a corner with wave after wave blasting you and your abilities seemingly not up to the task. Still, getting out of these situations can warrant a good ol’ fist pump, so there is some reward to the games nature as well. 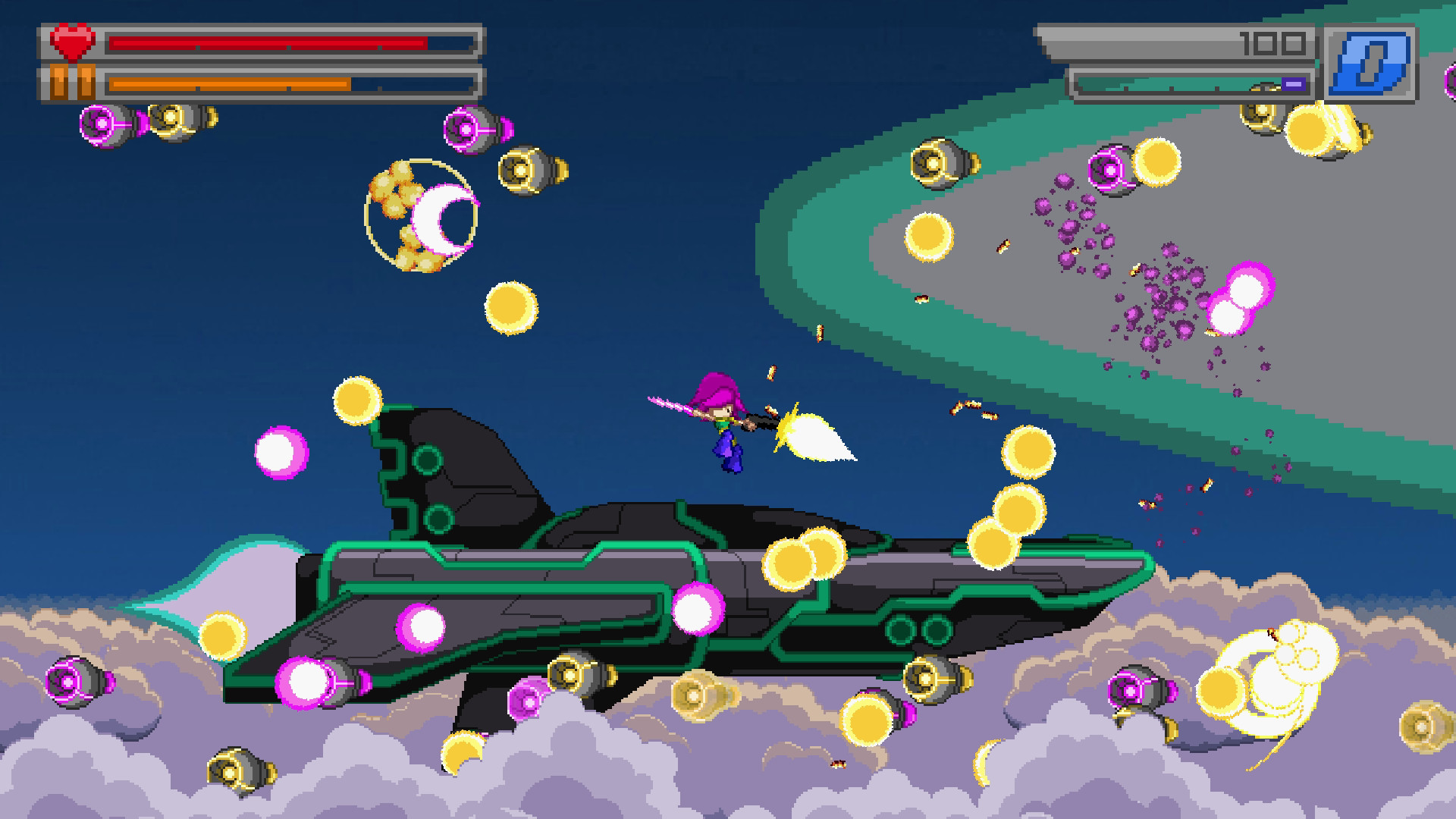 Bleed 2 may be a relatively short experience, and it will no doubt leave you wanting more when you’ve tired of that on offer, but it’s a superb game while it lasts. The slick gameplay & superb soundtrack blend together perfectly for a superb action packed romp you’ll likely return to, Endless mode in particular will make good on any returning short burst sessions. Worth a try if side scrolling action is your forte.