Tokyo Tattoo Girls is the latest game to reach western shores thanks to publisher NIS America. Developed by Sushi Typhoon Games, the strategy based game arrived on PS Vita and PC via Steam just a few days ago – over a year after its original Japanese release. Let’s see how it has fares…

Tokyo Tattoo Girls sees you take up the mantel of a tattoo artist in the middle of the sealed city of Tokyo. The once bustling city, reduced to a shadow of its former self and sealed off from the rest of the world after a disaster struck, with girls later found with tattoos that had appeared on their bodies imbuing them with incredible powers. Forbidden from leaving the city and holding vast power, the survivors try to create a sense of order by dividing Tokyo into 23 wards, each presided over by the Kumi. After some time a rumour begins to circulate that the one to defeat the Kumi will be able to escape the city, and thus one of the six heroines who found a small tattoo had appeared on her back after the incident stumbles upon our artist.

The story behind Tokyo shows a fair amount of promise with interesting dialog and from the back story alone, was what had caused it to originally appear on my radar. However, after the initial introduction I cant help but say it falls somewhat flat. In fact, minus a 5 or so line dialog from each area boss, each of the 6 leads only have 3 brief scenes consisting of meeting you, being half way done and the ending – which serves only as leads to the back story. All of this plays out in a 1-2 hour playthrough and felt a little wasted, when most if not all dialog is about the casts personality rather than this unique spin on the whole “unexpected gift to save the world story line”.

Gameplay for Tattoo girls is sold as strategy, but once again falls into the realm of wasted potential as it stumbles more towards that of a visual novel. Whilst that doesn’t mean it outright fails, it could have been much more akin to something like the romance games. Despite the aforementioned lack of dialog, like most VN’s you will find yourself with almost nothing to do and not even a interesting dialog to enjoy for the most part, in fact the game almost fully plays itself to victory only offering any actual resistance in the later unlocked hard mode.

The idea is simple. Gain influence and recruit people to your side while trying to remain undetected until you can invade and take over. In actuality however, you wait for money to come in, spend it on tattooing your girl and occasionally paying some money out for people to look the other way. Everything else just seems to happen, even when taking down the head of any ward I don’t believe you can fail (I tried) The game will suddenly decide you are going to invade a ward and you will have a small chat with that wards leader about why you are invading and given 3 options in response. These options only seem to decide if you get a CG or not and that’s it. That’s the whole thing. No tattoo special power battle or anything just insta-win and sublimation. Seriously its like the whole tattoo powers plot is forgotten after the introduction.

Finally some way the game can earn some praise is the visuals and for a game with TATTOO in the name and (supposed plot), one would hope it delivers and it fortunately does. From the tattoos themselves to the on screen visuals during gameplay, the influence of Japanese artwork is clear and is easily one of the best points this title has in its favour. 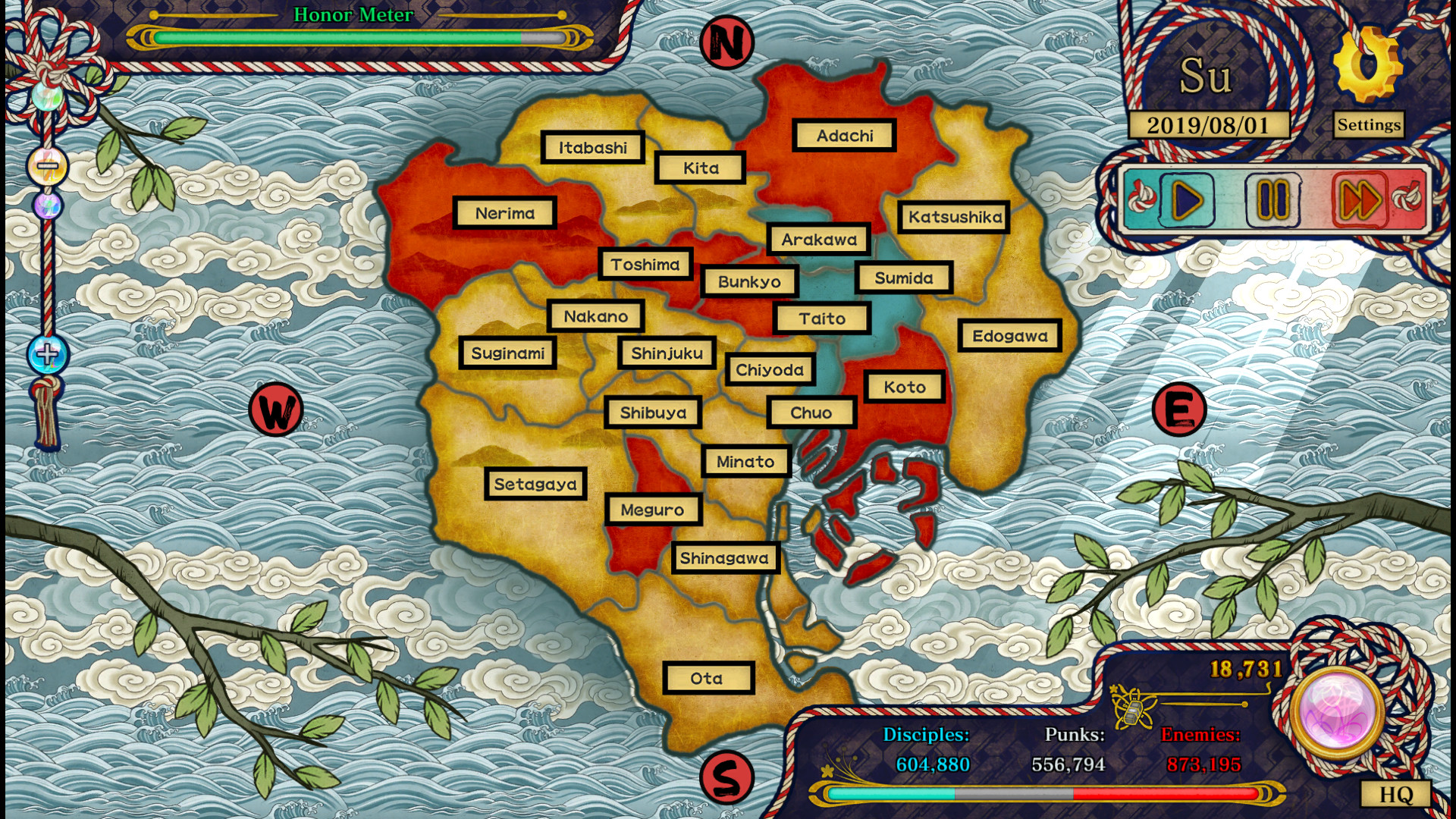 Overall I have to say that Tokyo had a good idea and an element of uniqueness to set it apart, but as a strategy game it falls way off the mark – landing more towards proof of concept than a actual strategy game. I cant help but feel its lacking something more in its gameplay, either more romance-esq systems or perhaps a battle system like that of Tactics Ogre. Sadly its also very basic with the story, never truly delivering on its initial promise or has any major or interesting dialog. Sadly the beautiful artwork is overshadowed by everything else the game has to offer, rather than enhancing a fun or engrossing title. A missed opportunity.