10Tons Games seem to be on a roll pushing out top down shooters seemingly every month!. Originally breaking out with the fantastic Neon Chrome and following it up with Jydge we have their latest title Time Recoil, Will 3rd time be a charm or is it just a giant waste of time?

As mentioned in the intro 10Tons are making their mark with top down shooters, they have tried the rogue like route, tried the more tactical route and now it’s time to take on the style of Hotline Miami.

Time for a tale

Time Recoil is set in the 1980’s, the evil Dr Time has taken over Europe and reduced it’s main cities to dust!. There is a small resistance group located in Paris, they break our title character out of jail in the past and bring her to the current time to make use of her time abilities. The game then involves alot of a back and forth between times, 2D characters and forgettable story telling.

As you can tell from that last line the story isn’t exactly the best on offer here, it’s nothing terrible it’s just poorly executed and manages to be incredibly unforgettable.

Graphically Time Recoil isn’t a power house, the visuals of the game really stink of small budget and time constraints. Despite being set in a ruined europe you’ll only ever see some debris outside of the levels. All the levels look exactly the same with just a few changes such as jail doors, boxes to make it look like a warehouse or desks to make it look like an office. The character models also suffer here, beyond the main character you have the standard scientist model, enemy troop character model and the mysterious yellow person character model. Yeah it’s just that varied!. 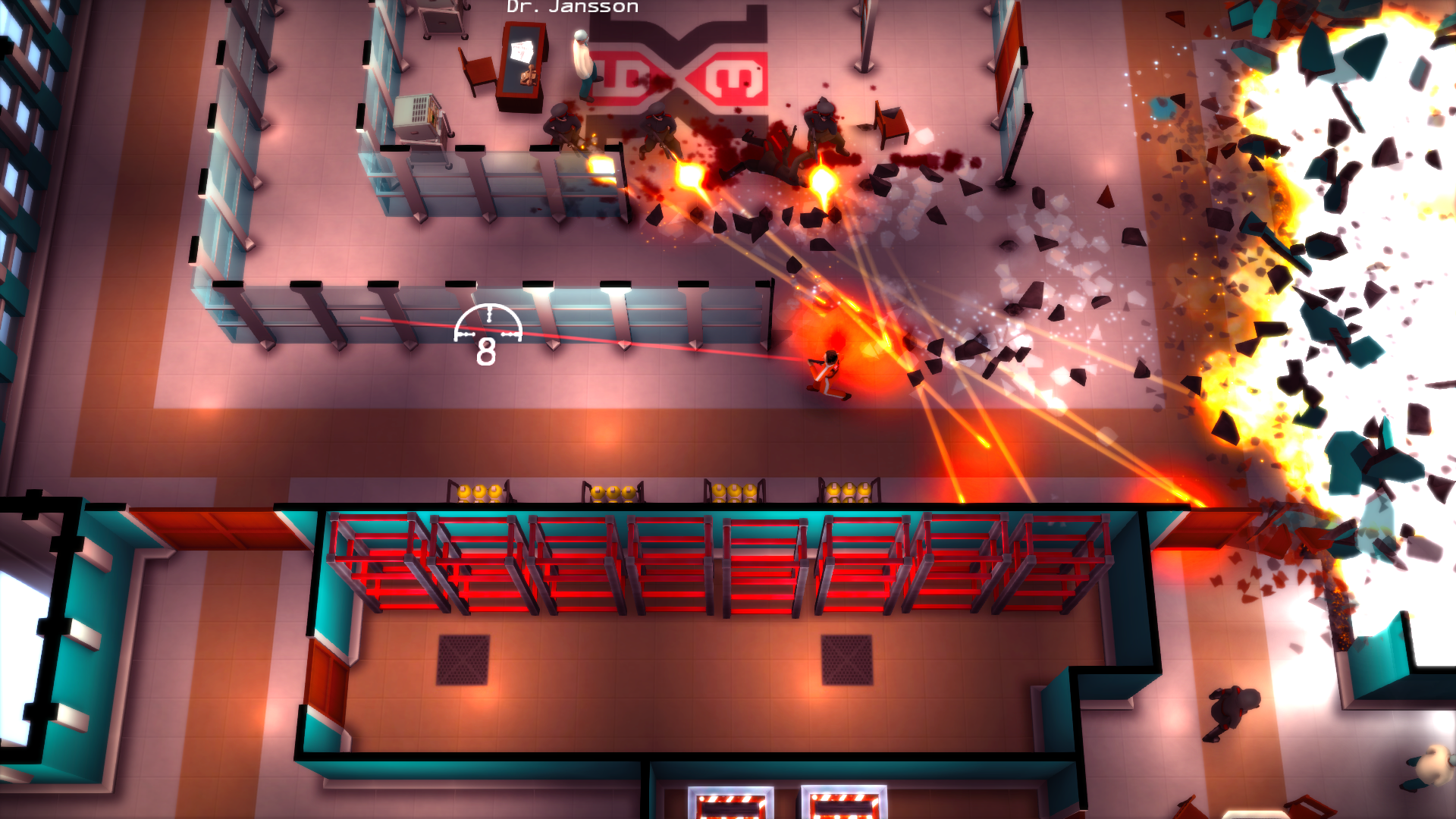 The audio side of Time Recoil doesn’t fare much better, outside of the gun sound effects you’re driven along with a generic thumping track and what seems like “Sci Fi Timey Wimey Sounds 101” playing for the sound effects, the gun sounds are all sorts of satisfying though.

So far it isn’t sound too great is it? well fortunately the one thing 10Tons nails is gameplay, good thing really when you play games for the gameplay!. As mentioned in the intro Time Recoil is a twin stick shooter in the vain of Hotline Miami in the aspect that it’s really more of a violent puzzle game!. The basic premise is that each kill you make slows down time, builds a meter to better powers and makes the shoot outs easier and much better visually. 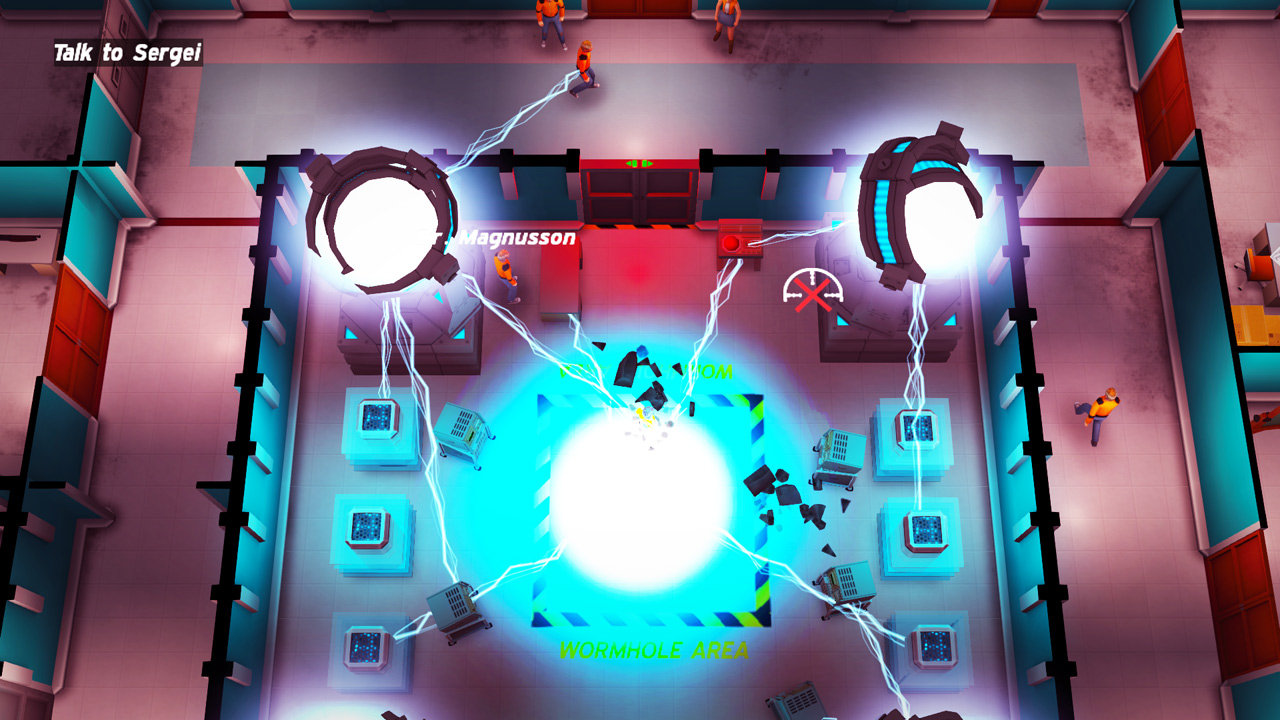 Time Recoil keep it’s gameplay fresh with it’s 1 hit kills, varying time abilities which can drastically change how you tackle the levels and the different objectives, sometimes it’ll be kill everyone, sometimes it’s capture such a person, other times you have a time limit, it really isn’t a case of wash rinse and repeat.

Time Recoil is heavily rooted with it’s arcade lineage, it’s quick, tough and is covered in that time stealing “One more go” mentality, you can and will lose hours to this game without noticing it!. Once you’ve done the campaign you can then revisit the stages with time trials and upload your fastest times to the online leaderboards to see how is truly the time lord!. 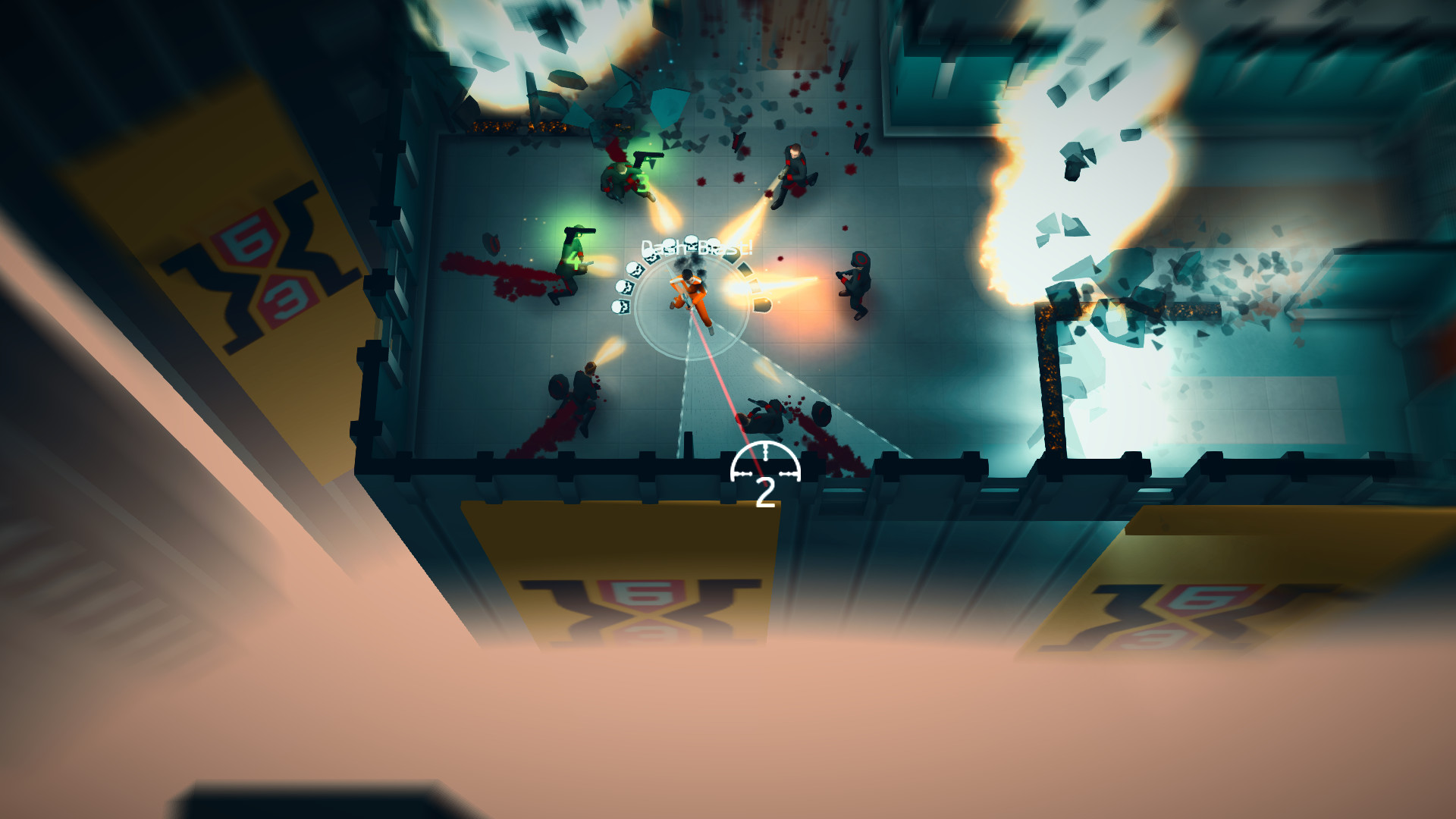 There are five chapters in Time Recoil and this took me just shy of 6 hours, there are also in game achievements and the time trials to keep you playing.

The controls are fantastic, easy to pick up and work well with the Nintendo Switch’s layout for the most part. I did notice that it was slightly awkward to aim while in Handheld Mode but that soon passes.  The game runs buttery smooth both docked and undocked which really helps hammer home the arcade perfect gameplay.

Time Recoil is very much an arcade title through and through, despite low budget visuals and the flicker of narrative it’s a very easy game to recommend. You’ll lose hours trying to perfect the stages in the quickest time possible and finding the most effective ways to use your powers. Time Recoil is a certified gem on the e-shop and easily worth a look.