Moero Chronicle is a spiritual sequel to Monster Monpiece from the fine folk at Compile Heart, shedding the card based gameplay of the original in favor of dungeon crawling and capturing the monster girls Pokemon style – or not quite, things are done by other means. Previously released for the PSVita, has its journey to the PC been a good one or did the quest end with a whimper? Lets find out. 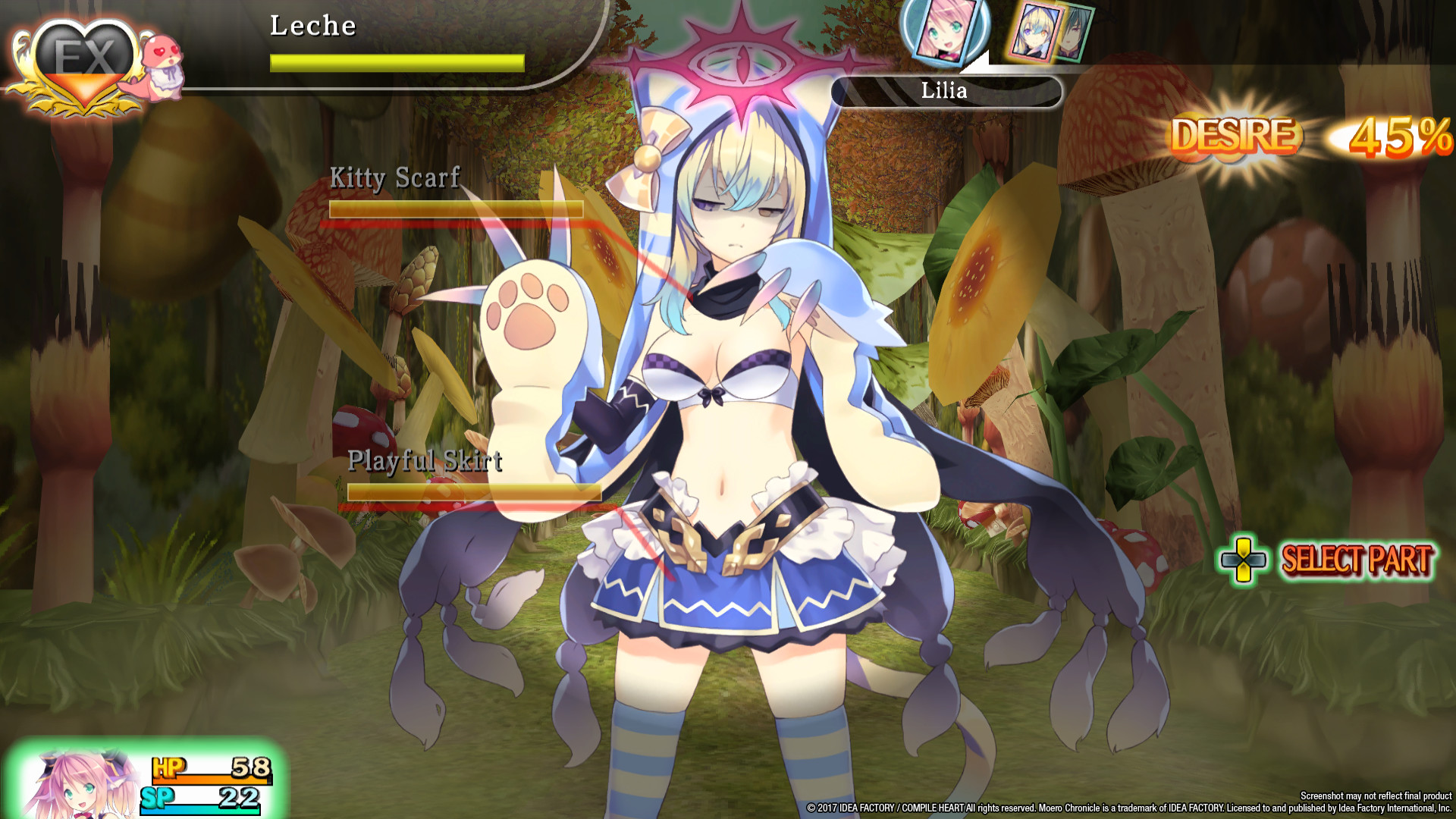 Moero Chronicle sees you taking on the role of Io, an ordinary boy living within a town cohabited by humans & monster girls nestled between both worlds. Once introductions are over, you learn that a new crisis has taken hold of the world as the monster girls outside of Io’s village have suddenly developed a hostility towards humans and attack them on site. Fed up of seeing Io loitering around the village not seeming to do much, the village elders decide to kick him out of the village with the mission of finding out what is causing this crisis and fixing it. As expected he isn’t feeling up to the task, but once his childhood friend Lilia decides to convince him they set out on the quest given to them. It’s not long until they run into Otton, a panty enthusiast that makes everyone feel uneasy, who agrees to act as a guide – and so the core of the party is formed.

The story is played out in a typical Compile Heart fashion using visual novel style dialogue sections and are as well animated as expected. The story is alright to be honest, it has it’s typically goofy edge – but what brings it down a little really is the protagonist. His apathetic attitude to everything is at odds with the other characters and story outlook as a whole, but there is a brilliant counter to him. Otton makes for the perfect comedy anchor here as his infatuation with panties plays into the games ecchi leanings perfectly. The other characters also do a good job of keeping the attention off Io during the story segments, which is a plus as the monster girls are much more interesting and there’s plenty to find during the course of the story. 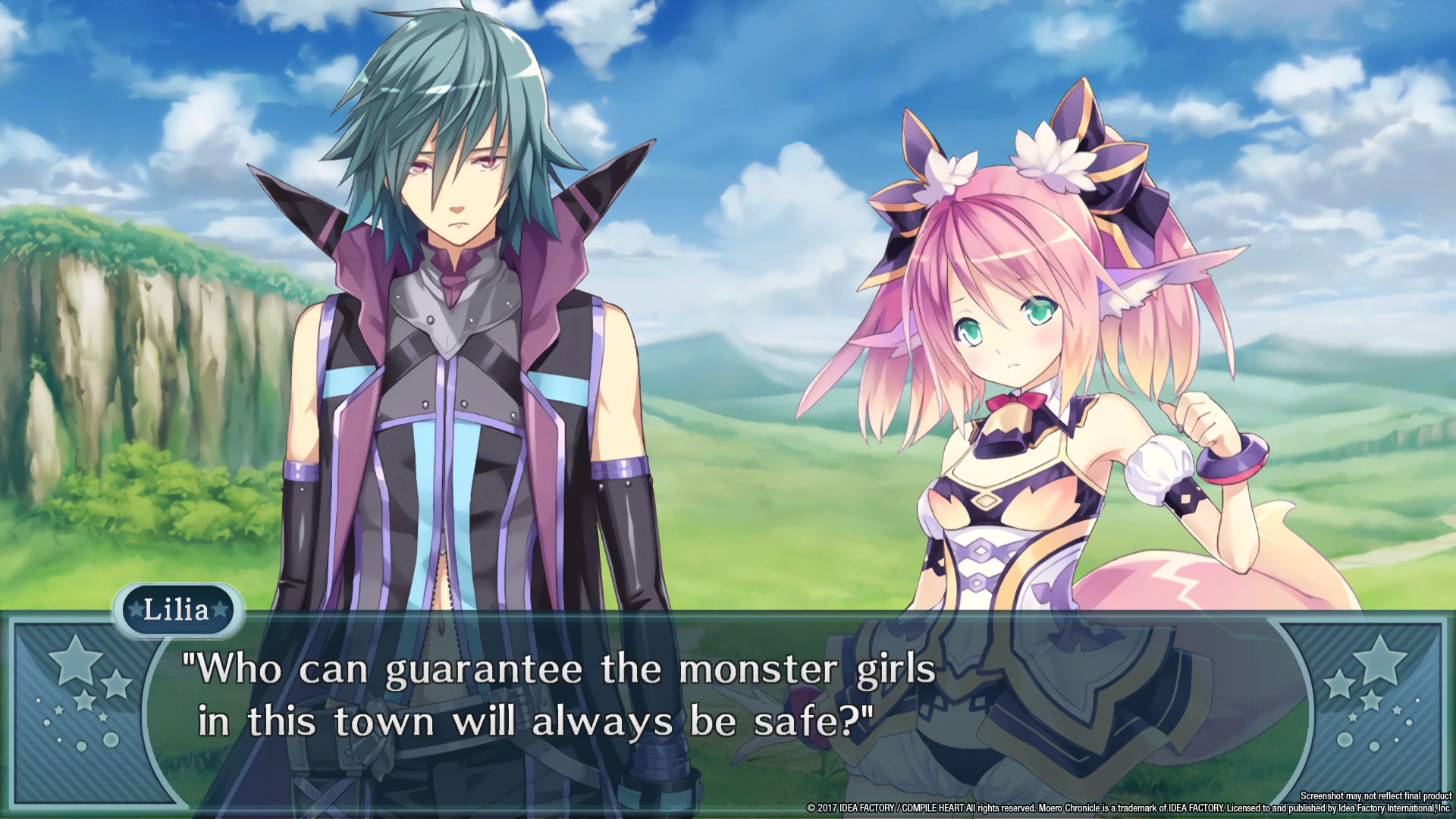 As a moe connoisseur, Moero gets itself a thumbs up. Sprite design is generally excellent on the monster girls, each has their own unique flair and similarities are kept to a minimum. There’s a good amount to add to your party and the game throws up some interesting combinations. This hasn’t translated to other areas of the game as much, the various dungeons look good being fully 3D yet not looking out of place alongside the sprites, though lack much visual difference within the same dungeon on the different floors. Enemy designs are varied, but variations within the same type only come in different colours. Full voice acting makes the cut with each girl sounding unique, alongside a pretty fun batch of music that fits the uplifting & goofy mood of the game.

When it comes to PC releases, I tend to also test on my laptop as its hardware is a lot lower than my PC so gives a decent indication of how it may perform with lesser hardware. Unfortunately this game just wouldn’t boot. The game would black screen and crash back to desktop, so I’ve been unable to test in that regard. At the time of writing the game is also locked at 720p. Its not the first time I’ve reviewed pre release before and found limited resolutions, but this goes beyond those. Aside from that I can’t really fault the presentation, sure it’s a PSVita port – but as always these games tend to get away with it a little due to their anime style that helps to mask the lack of detail at high resolutions. 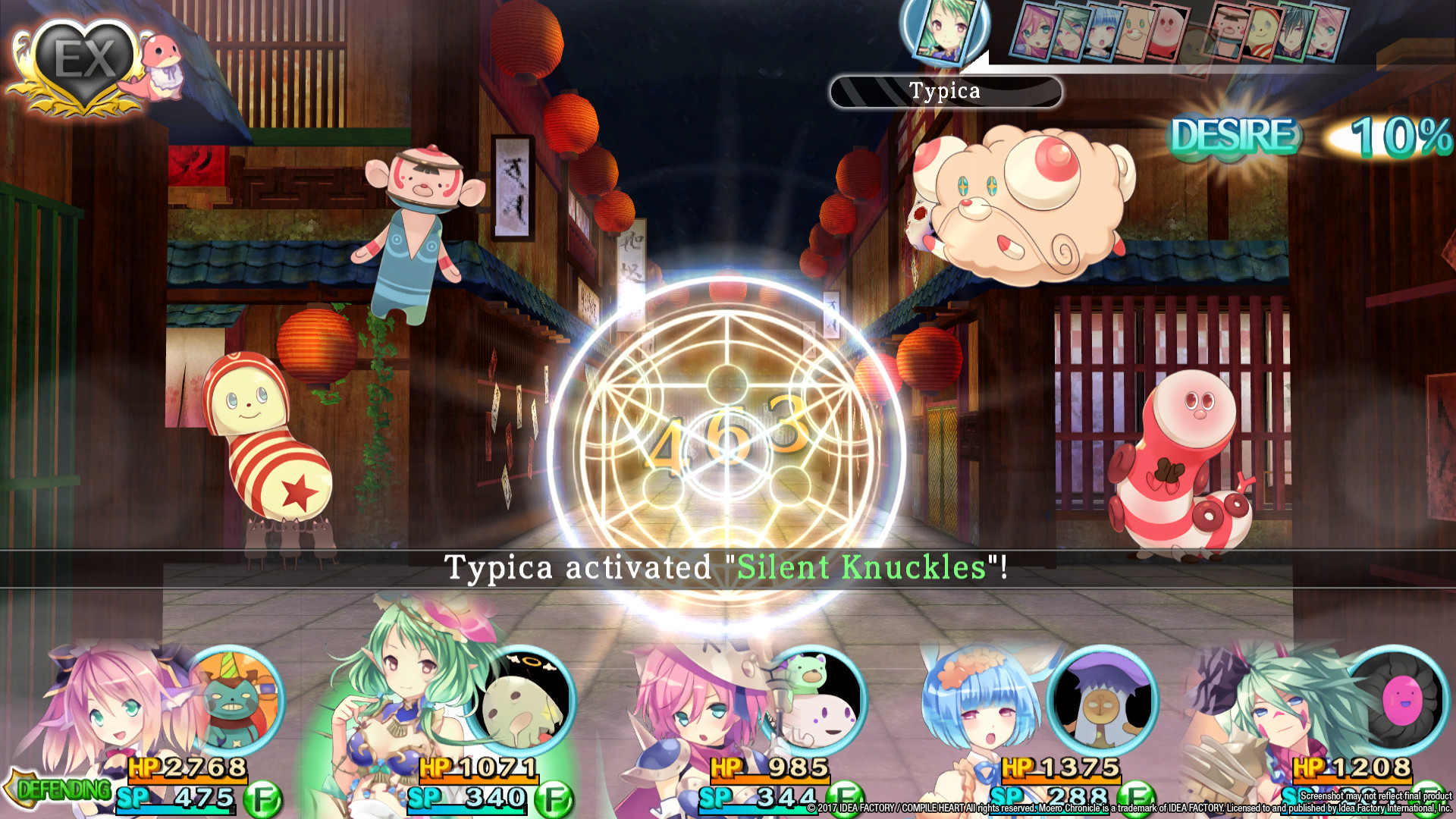 Out is the card based gameplay of Monster Monpiece an in is dungeon crawling, Etrian Odyssey style. Everything is done on a turn basis, exploring the dungeons too as a move by you also counts as a move for any monster girls on the same floor. Each dungeon has multiple floors with enemies getting progressively more powerful the further you get, but exploration is still required if you want to get some good loot. Battles are typically turn based, with the protagonist also getting in on the action in more of a support role. His best support action is storing up magic power gradually each turn which can then be transferred to one of the girls, boosting their attack power. Charging this up too much can cause him to explode which takes him out for a few turns, there’s a real risk & reward aspect to this ability. There’s a good amount of tactical play when you consider status effects & weaknesses etc, so we’re not being short changed on getting a fully fledged Jrpg. You’ll wanna keep these in mind when entering new dungeons for the first time & facing monster girls, the difficulty spikes usually show here & you’ll need all the tools at your disposal to survive and level up.

The other side of the game is focused on monster girls and is where you’ll find most of the ecchi. Recruiting the girls is done by defeating them in battle quickly by destroying different areas of clothing. The game then switches to the rubbing mode as Ottons libido maxes out, and its here you can rid the girl of the evil mark & add her to your party roster. The rubbing mode also appears at the inn, alongside the usual item creation etc modes, which is used there to increase your intimacy with the monster girls and boost your relationships. Control is a little iffy during the rubbing mode, which was kinda expected given the lack of touch control. In general gameplay, both controller & keyboard work perfectly fine, but its not so rosy once rubbing is involved. The control scheme when using the controller here is too convoluted and lacks accuracy. You’ll fail. A lot. Mouse works best, but you can’t switch on the fly during a battle unfortunately so you have to make sure to change over before an encounter. 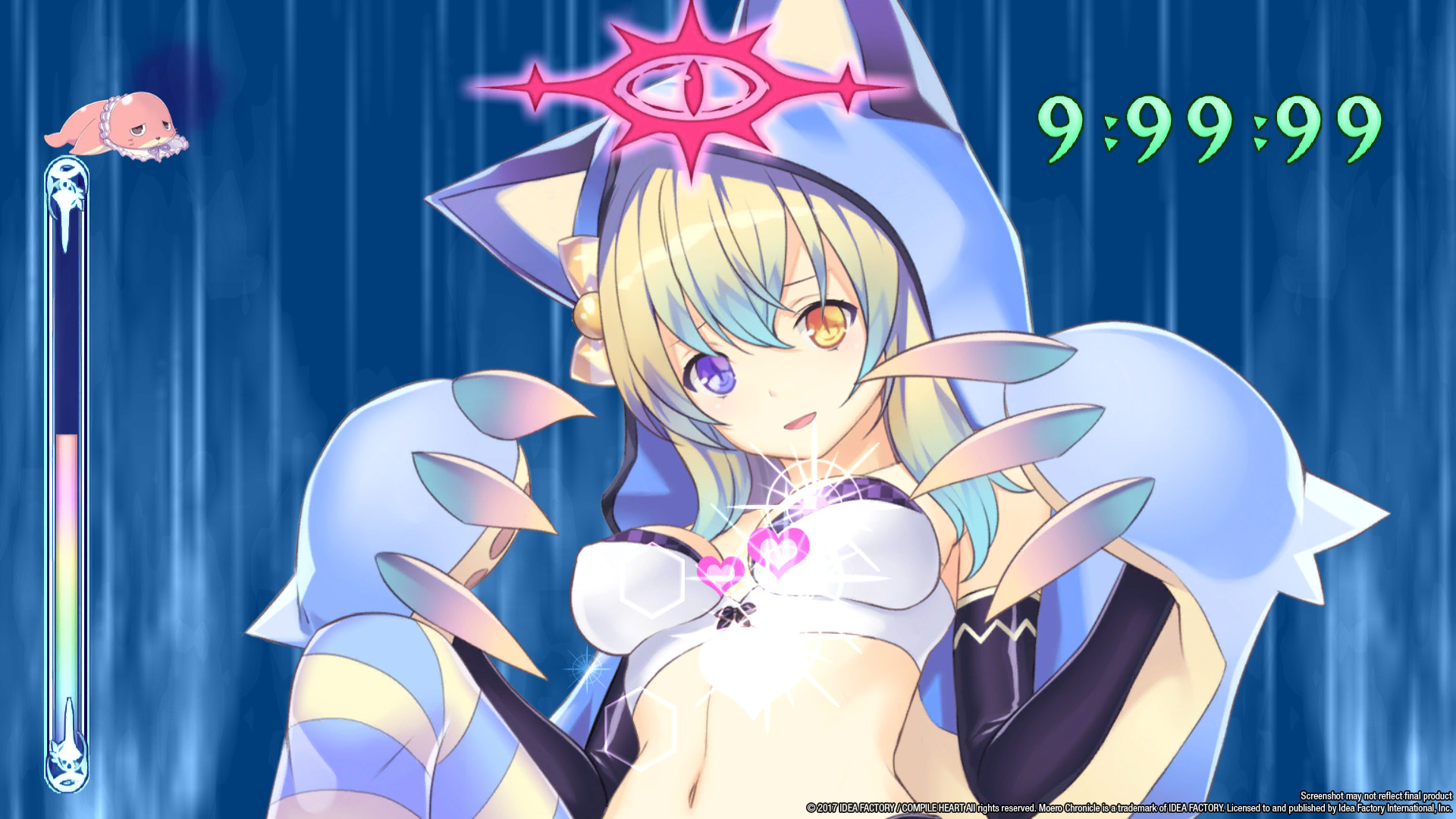 To be honest I was quite surprised by Moero Chronicles and how it fares compared to Monster Monpiece. The glorious moe was a given, as was the ecchi & risque modes, but the dungeon crawling itself was actually well done considering and it was a generally pleasing game to play. The downsides can hurt the game though, some convoluted controls & uneven presentation being the stand outs, but they don’t do enough to dim the monster girls glow.