This review originally ran on our previous Blogspot site otakugamersuk.blogspot.co.uk and was published as part of our Sega Week on the 14 November 2013. Nothing has been changed from the review this is just a republish to assist our current article about the upcoming Fire Pro Wrestling World title. Thanks for reading this little slice from the past & one of my first articles around the site’s creation – Andi.
P.S Sorry about the screens!
Hooray it’s SEGA week! Keeping in the spirit of fond SEGA memories I’m going to present to you something of a passion of mine. WRESTLING, I love wrestling have done since I was child. My wrestling tastes have changed over the years I’m more a fan of the actual mat work than the pageantry of it nowadays. Though I must admit I’m still a sucker for Hogan vs Warrior WM 6!. 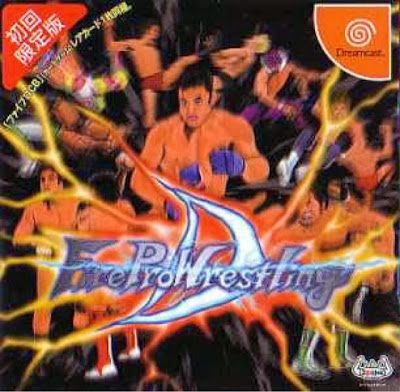 Where is this going you ask? A little known title over here called Fire Pro Wrestling!. Seeing only 2 releases in it’s 20 year history over these seas, Fire Pro Advance and the god awful Avatar fighting game on XBLA. I’m going to tell you about the Dreamcast title Fire Pro Wrestling D.
Released in 1998 and seen as one of the series high points Fire Pro D is a wrestling sim at it’s finest. Rather than focus on the product as a whole Fire Pro is for the fan who enjoys nothing more than a good match.
With a small amount of specialist matches the game shines in the ring with the mind blowing array of matches and the customisable and brilliant A.I. Based with mostly Japanese federations there are a lot of wrestlers not known to the casual fan. Fortunately there are a lot of familiar looking and sounding “American” wrestlers someone with half an imagination could figure out!.
Having only released in Japan this title though reasonably import friendly has been navigated mostly through walkthroughs. Now after tons of hard work passionate fans have released a translated version for everyone to enjoy! Visit http://rdcproject.blogspot.co.uk/2013/08/fire-pro-wrestling-d-english.html?m=1   for info about this patch after this write up and experience it in all it’s glory!
GRAPHICS! 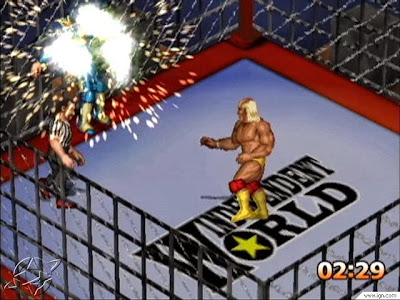 The first thing you will notice about Fire Pro is that it’s sprite based. No 3D models just 100% sprite based goodness on the character models. The ring and arenas are 3D but that’s your lot, this often divides most people as they see this as a bad thing “lol mega drive graphics”.
Why this is a good thing is not only do the moves looks very well animated, there is no need to Mo-cap for them so the amount of moves and reactions is astounding!.
Even with the sprites the wrestlers are usually very detailed and it’s fairly easy to recognise the more famous wrestlers you can select.
Entrances aren’t much to marvel at and 9 times out of 10 you will skip them, your wrestler steps out, taunts and hits the ring. Victory is just as unspectacular, strike a taunt and the results screen hits. This is all filling to what Fire Pro is about, unlike most wrestling games it’s not bothered about the outside of the match just the content of the actual bout!.
Character edits (more on that later) don’t seem out of place and the arena and logo designer both work well and unlike the bigger series created content actually fits in rather than sticking out like a sore thumb!.
GAMEPLAY! 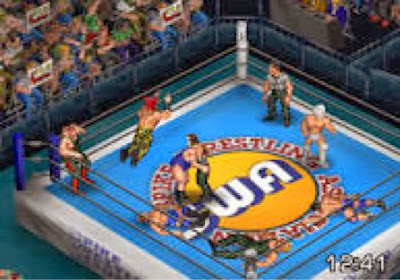 This is where Fire Pro stands head and shoulders above any other wrestling game including the holy No Mercy!. Relying more on timing than button mashing and a unique grappling system ontop of a hit and miss melee system you may find it a touch overwhelming when arriving in the squared circle! 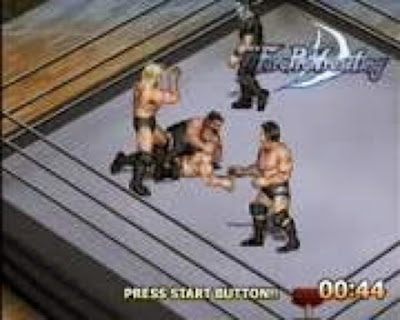 First things first, Fire Pro isn’t designed for fist fighting. It’s there as an option, you can slam a fist into your foe or drive a boot into his gut but lining up the right plain is a pain most of the time and better used after making your opponent dizzy.
Instead your assault will be mainly grapple attacks, when you come close enough to each other you automatically grapple. As soon as your hands lock you need to press a button and if you want a direction. Each button and direction combination performs a grapple move from weak to strong.
To reverse the move you need to press exactly the same button as the other wrestler, this sounds harder than it is, it just takes a bit of thinking ahead and studying the flow of the match. 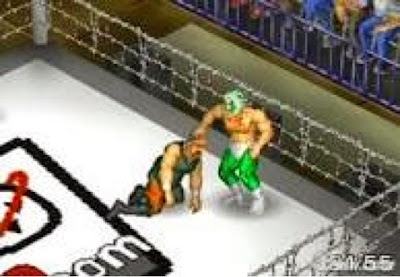 Another factor is there is no HUD and thus no bars or hidden requirements to meet before you can hit your signature move. They are part of your main grapple set and thus can be activated any time during a match, it’s up to you when and where you hit it. To counter this it has a higher chance of being reversed at the start of the match and in the case of the American wrestlers where they usually end a match only hit full power when momentum is high and your challenger is vulnerable. When a signature is at full power it has the chance to CRITICAL which basically K.O’s whoever gets hit, causes a tap out/KO or busts opponent open and leaves them vulnerable to pin.
Stamina is also a huge factor within a match, rather than taunting all the time you need to pay close attention to your wrestler. Are they sluggish or look tired? You need to let them take a breather be it after a big move or after taking an assault. Just like the actual product sometimes you have to roll out of the ring and grab a breath. Naturally smaller more athletic guys have more Stamina than say Abdullah the Butcher or Big Van Vader! 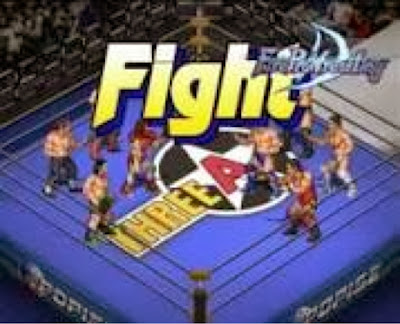 The whole point of this is to make the fights more of a simulation. Rare you will have a squash match unless you go out of your way to make it so. It’s this combination of elements which create such addicting matches which will make even the most cynical fan mark out at the end!
Match types aren’t as varied as other games in the genre and the stipulations aren’t quite as customisable. Matches have to end Submission, KO, Pinfall, Count out or DQ, this means no table matches or Ladder matches. We they do have is cage matches, tag, Japanese death matches involving barb wire, exploding cage matches, handicap matches and Octagon Matches. What that final one means is you can also sim UFC/PRIDE style matches which gives you even more bang for your buck!
The other star mode here is Edit mode, here is where you make all the little tweets to your game to make it suit your needs. From the in depth Create A Wrestler to Create A Title there isn’t much here you cannot customise!. For example say you want to recreate a previous Wrestlemania event, you can do that. Create the logo using Logo Editor then apply that to the ring in Create an Arena. Once that’s out of the way you need the roster, have a look what’s already available if you don’t have the full set head over to CAW and get your edit head on!. 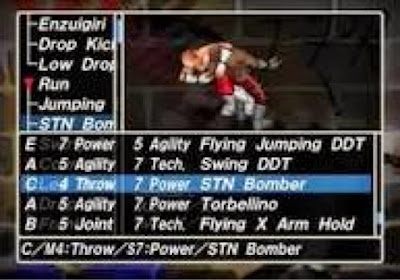 Within the CAW system you have the advanced A.I system. What you have here is the ability to programme any edit or current wrestler to act as they would in real life!. This is paramount to editors and the Fire Pro experience, it’s this which makes the game feel so authentic and helps create the legendary matches you will have!. What this tool provides is for example should you make Hulk Hogan you can have him react to a certain degree of damage before he “hulks up” and presents you with some right hands, a big boot and then follows up with the legendary leg drop!. It’s that versatile!
The Title Belt system works well aswell, once you have set one up and decided who should have it or who won it in a tournament the game then keeps a record of who won the titles, how many defences and how it was won. This makes it easier to keep a note of this titles prestige and previous holders which is essential for people running e-Feds.
Create a Tournament is here which is something far too many wrestling games have missed out. Though it’s a minor thing a lot of fans love the Tournament style setting and creates limitless fun with sim’d matches thus not knowing who will rise through the ranks to take the title at the end.
Victory Road is the career mode on offer in Fire Pro D. Either create a wrestler or pick an existing one and hit the road traveling around the world. The object of this is to beat your opponents, win and defend titles and become the G.O.A.T all while unlocking hidden wrestlers!.
Final Thoughts!
This game does have problems, they could of put a bit more effort to aesthetics such as better entrances and champions walking to ring with their title. Match type feels limited even for games around it’s release and options such as interference not being available do limit it some what. Finally collision detection takes some warming to! As stated going Melee is a pain at times and more often than not is not an option at the start of a match with a fresh opponent!.
Looking past these criticisms and omissions you have the premier wrestling experience on the Dreamcast!. With enough content to last 2 life times and the ability to have jaw dropping matches what more would you need from a wrestling game?!?. This game is that good that it took another game in the series released on PS2 called Fire Pro Wrestling Returns for it to be bettered!.
Despite playing several editions including the infamous SNES version involving Suda 51 and the dangerously addictive Fire Pro 2 on GBA with it’s Ring Management mode, I always find myself back here. Sprite based graphics and solid controls means this gem has aged very well, couple that with the newly released unofficial translation which will no doubt bring the community back to D, you have an unmissable piece of wrestling game history!. Take a bow No Mercy! For your retro gaming fix look no further than Sega Dreamcast’s Fire Pro Wrestling D!
The following two tabs change content below.