Senran Kagura Bon Appetit is the first major spin-off for the popular Senran Kagura series, ditching the games usual hack & slash affair for some rhythm based action. It also manages to take things in a completely different direction with its cooking contest, with the portable PSVita release now seeing a port to PC – complete with all DLC. Does this port manage to entice you to go back for seconds, or has too many desserts left your stomach upset? Let’s take a look… 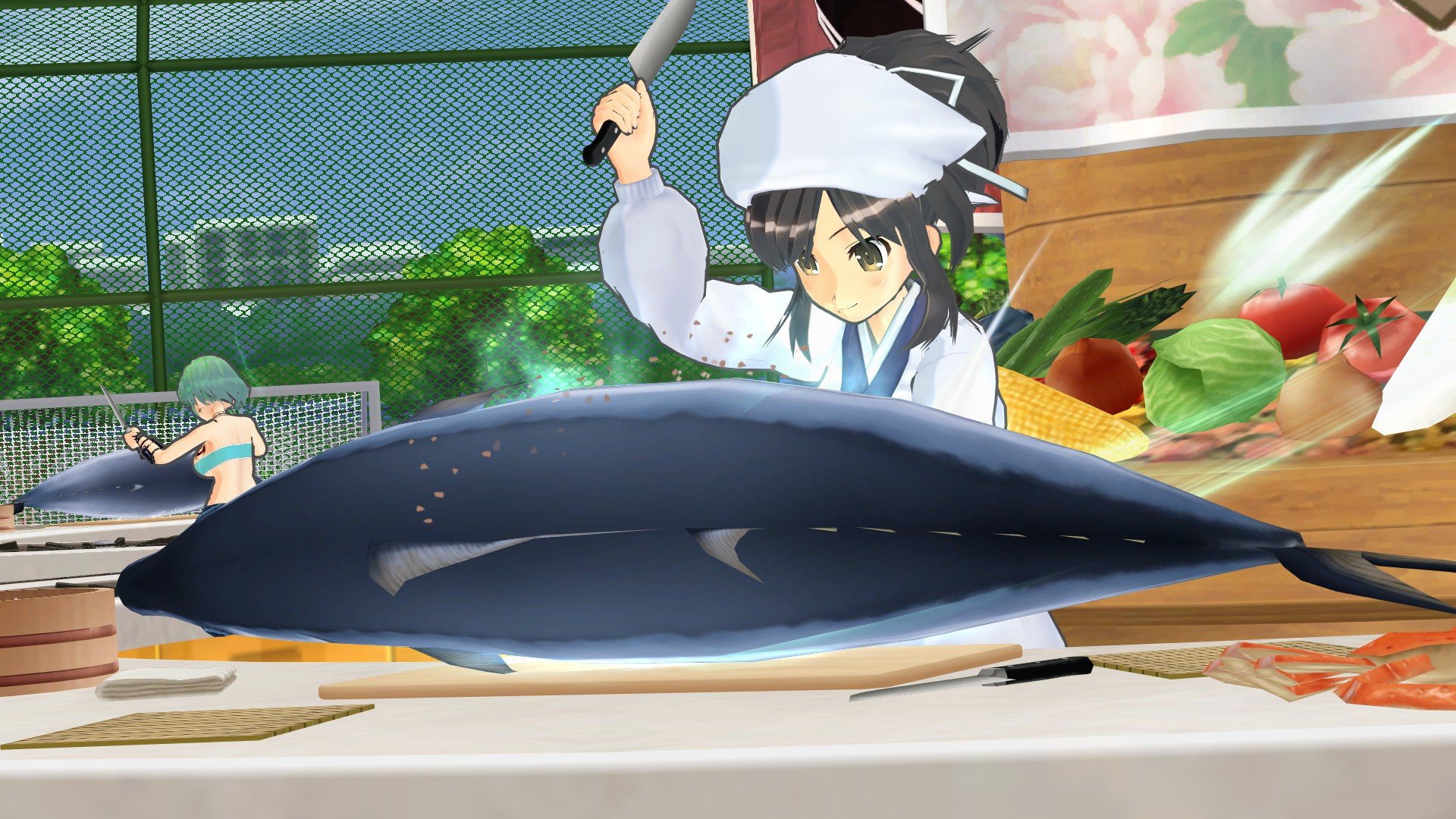 The story for Senran Kagura Bon Appetit sees the legendary shinobi & sushi chef Hanzo creating a cooking competition to find out if any of the shinobi student have the ability to create a super dish. The super dish is a legendary ninja art, and any of the girls up to the task that win will receive a Secret ninja art scroll. The story mode offers individual stories for each of the games characters from the four Shinobi schools. Gone are those occasional moments of seriousness you’d find in the main series, as this spin-off just stays goofy throughout. To be honest it’s all the better for it as it doesn’t need to advance the overall Senran Kagura story arc in any way and allows for some hilarious moments.

This port adds both parts of the PSVita game into the same package, so there’s plenty to play, with each of the girls stories progressing over several stages. You’ll get plenty of unlocks, mainly in the form of lingerie, with each song completed too. There’s actually quite a lot of rewards in a sense as you’ll always find something new unlocking after a stage. Unfortunately there’s not much else to do. Outside of doing stages you’ll likely just be in the dressing room customising characters as the game sticks rigidly to its rhythm aspect and doesn’t budge to offer other gameplay types. The dressing room is where you go to try that new piece of lingerie on your favourite girl. You can customise the characters how you choose, but this mode is a given for the series so not much new to see here. 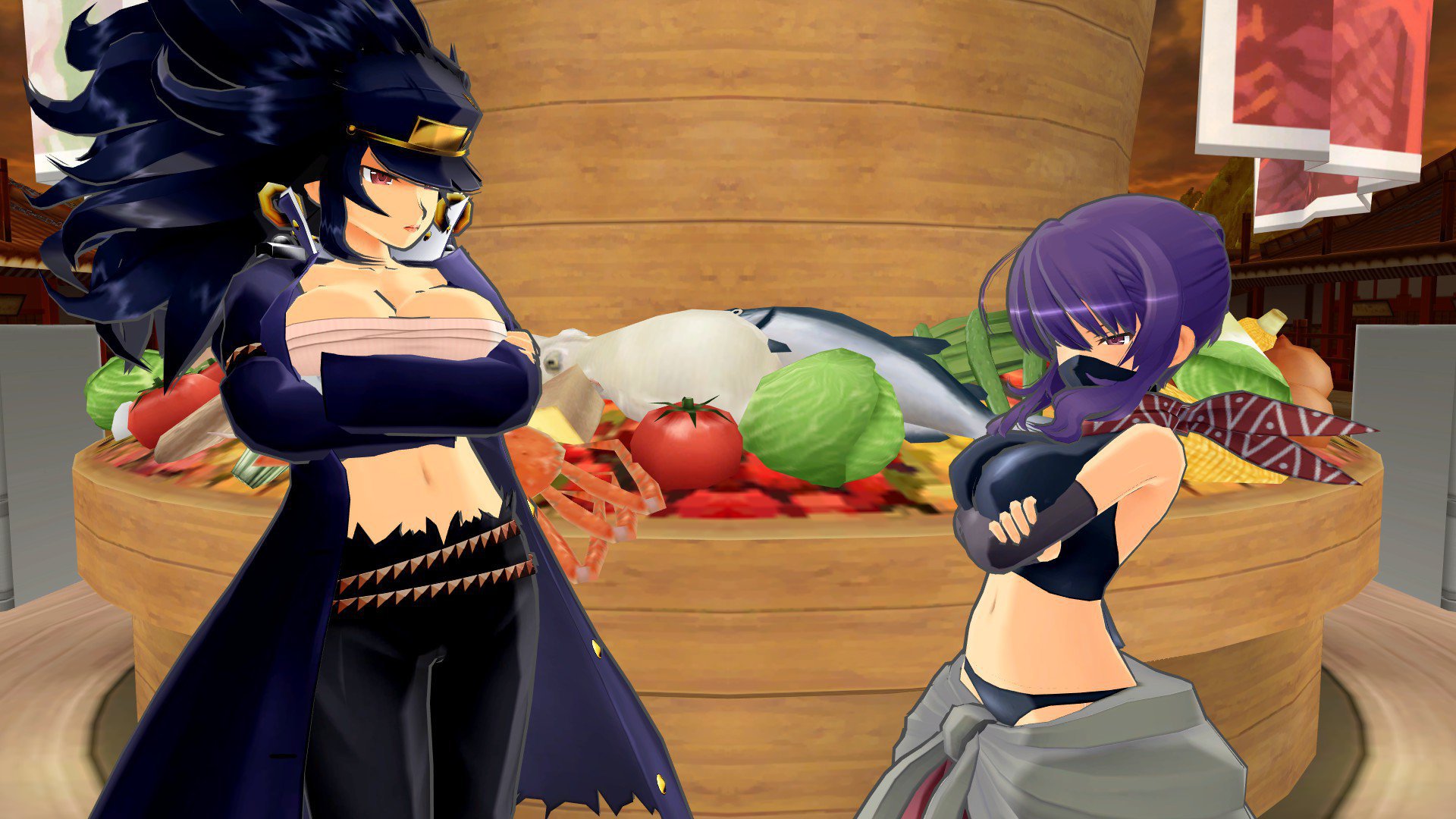 Let’s get performance out-of-the-way first. For the most part it works really well. Character models are always of a high quality in this series, for obvious reasons, and they’ve made the transition well from the PSVita to PC. The games stages also seem to benefit from the boost offered by the port to PC, as textures & overall detail has scaled well (although there is still the odd texture lacking here & there) It actually looks quite good at 1080p, bests the PSTV with regards to enjoying the desserts on the big screen. Performance is pretty much rock solid, even on my Ivybridge based laptop – always a must on theses types of games. Luckily the audio doesn’t seem to suffer from any compression effects that might stifle it at all given its a handheld port, as it plods along at a decent quality – with a few catchy songs that’ll stick in your mind for a while. As you’d expect, the game features full voice acting during dialogue and is just as high quality as the rest of the series.

So whats that ‘For the most part’ about then? Well, it isn’t always smooth sailing. On my PC (i5 4690/16GB/Fury Nano) the game would occasionally hang upon loading for about 30 seconds – sometimes the screen would flash red during these moments and my PC would reboot! Laptop fared better (i5/8GB/HD4000) as it didn’t suffer these problems, but had its own issues. Textures in the background would occasionally flicker or just be plain black, foreground worked perfectly fine though. With PC’s having a huge amount of variations with the hardware, you could potentially not come across any of these issues – but its better to know its a possibility than not. 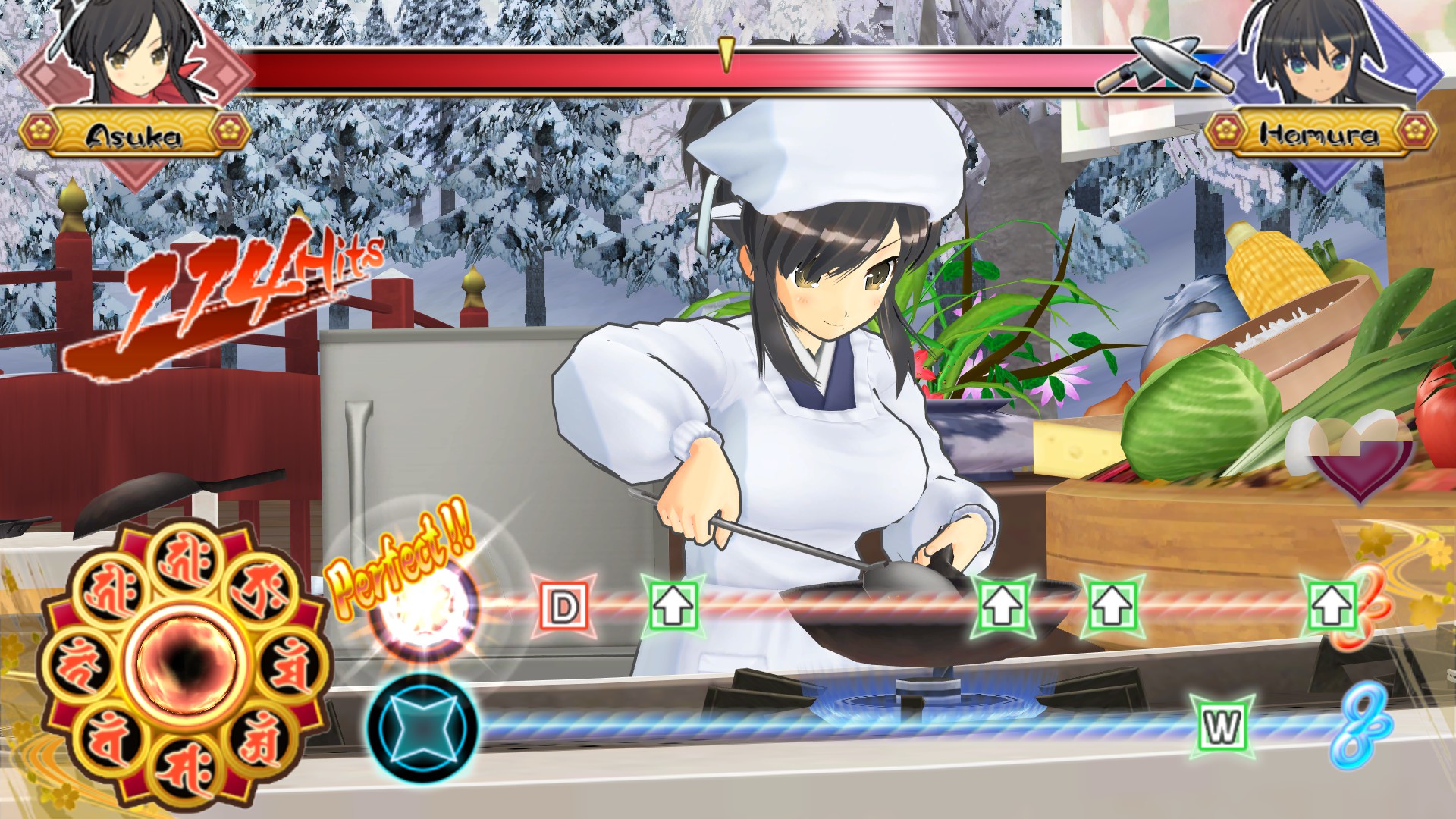 The technical issues didn’t affect the gameplay though to be honest. Bon Apetit is a pure rhythm game that focuses on timely prompts to maximise your score, and the smooth performance means it’s never a hindrance. Whilst it has its own situational spin on the genre, it doesn’t really deviate too much from what is expected of a rhythm game. It does also seem to have the odd quirky difficulty spike that’s actually song dependant oddly enough. You’ll be cruising along till you suddenly hit one of those songs and just scrape through, then the next song starts and it’s a lot easier. As a fan of the genre, it works for me. It doesn’t try to push the envelope but it’s mechanics are well refined.

There’s still cloth break and all the usual ecchi moments you have come to love from the series, only now with some obvious cooking twists. Dominating your opponent will see them served up as a dessert at the end of the round, with the camera adjustable so one can fully appreciate character detail. You could say it’s taken things up a notch, Estival Versus almost catches it with the finishers on offer though, but Bon Appetit still takes the cake with regards to fan service in the series to date. 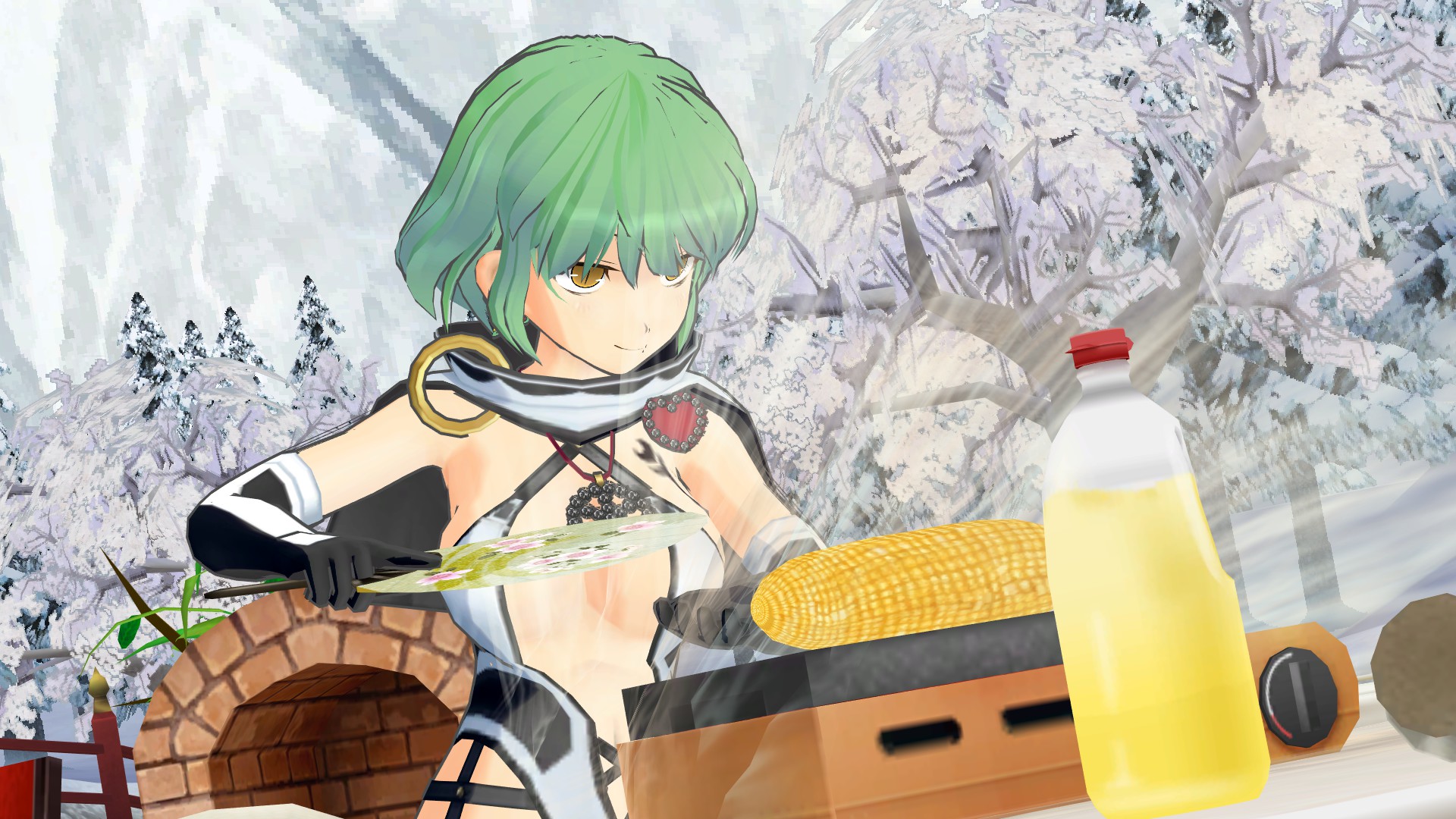 Senran Kagura Bon Appetit is a great spin-off for the series. It so different without losing the charm of the series that it’s a release fans will appreciate the most. As a fan of the genre too, there were some annoyances with the game (as well as some frustrating crashes & glitches), but it plays well without raising the bar. If your fed up of hacking & slashing your way to that life & hometown, then take a break with this and enjoy the sugary desserts.