June 29th saw the release of another long awaited mobile title by A-Lim and published by Square Enix, Final Fantasy: Brave Exivus is now available worldwide on both IOS and android.

Final fantasy brave exivus is a spin of title and a collaboration between square enix and A-Lim and draws on A-Lims previous creation brave frontier. It was originally released in japan mid October 2015 wit it seeing over 5 million copy’s downloaded as of 2016.

As the collaborative brain child of Square enix and A-lim’s hugely popular brave frontier (it had over 10 million downloads way back in 2014 becoming the most downloaded game on IOS and Android) it has quickly become a must have for many mobile game fans. Drawing on both aspects of frontier and the more classic final fantasy titles it sees you travel the world as a young airship captain and his childhood friend to uncover the truth behind a new evil threatening to destroy the crystals of the world, Granted the power of visions by the crystals the young hero’s pursue this new threat across desert, Oceans and frozen tundras with many secrets to unravel along the way. 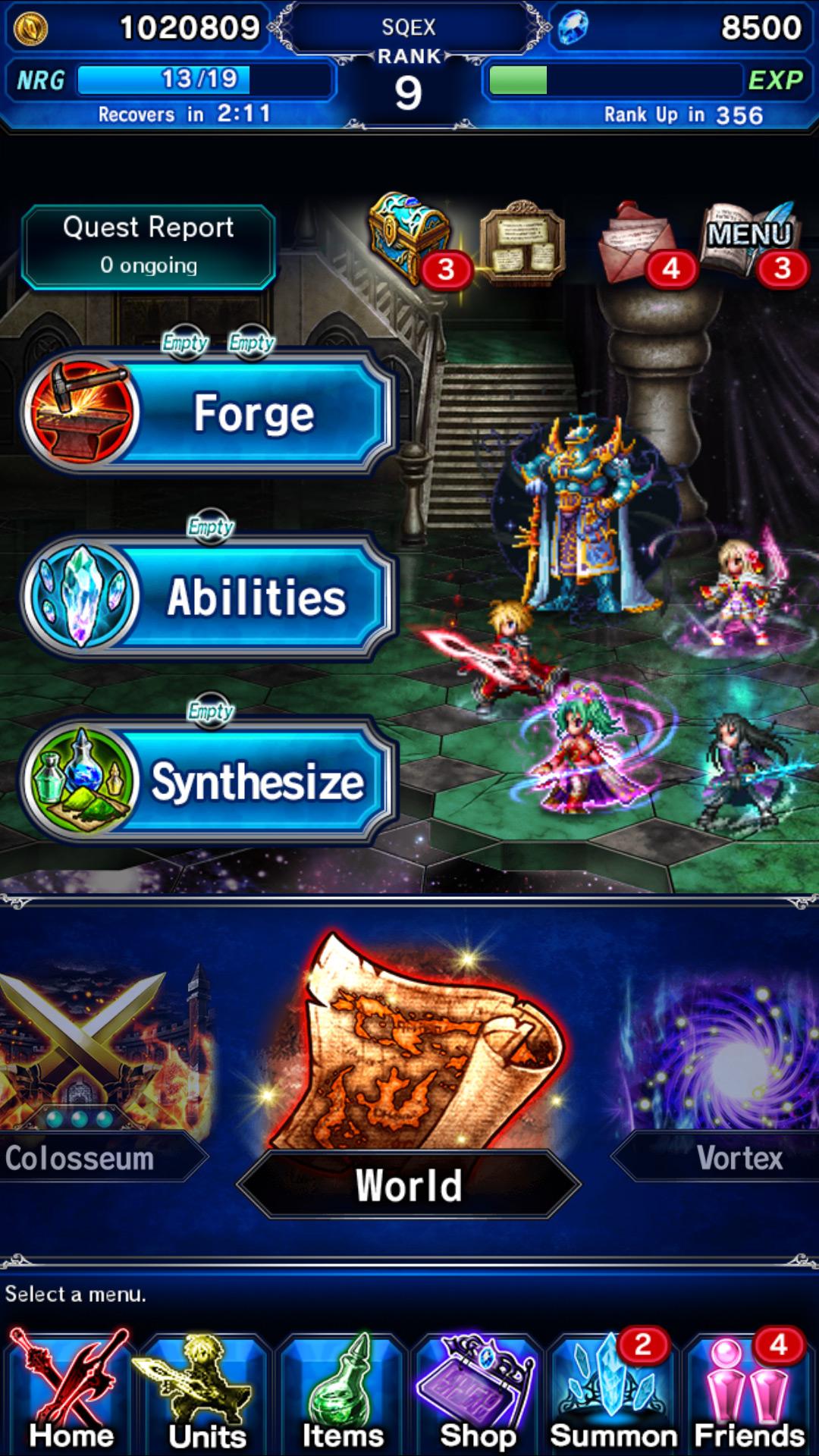 The story screams of early final fantasy and is sure to bring up feelings of nostalgia in fans of the series, Even in the writing of the story itself its cheesy and incredibly obvious for the most part yet manages to remain interesting timing the cut off points just right or throwing a new twist at you as its about to confirm a theory you have urging you to push on just to know if you were right. And honestly still has a better love story than twilight.

This is however as i have mentioned a joint effort and a mobile game so there are some slight changes to the usual final fantasy formula most annoyingly is the use of energy in order to complete quests and explorations, At Rank 20 i have 30 energy that allows me to do 3 quests at the point i am in the game grinding any progression i was making to a virtual halt as i try to complete side quests that see me use all energy trying to take down 10 of a certain foe when finding 1 can take up a full energy bar likely when i have 3-5 extra quests on the go at the same time. 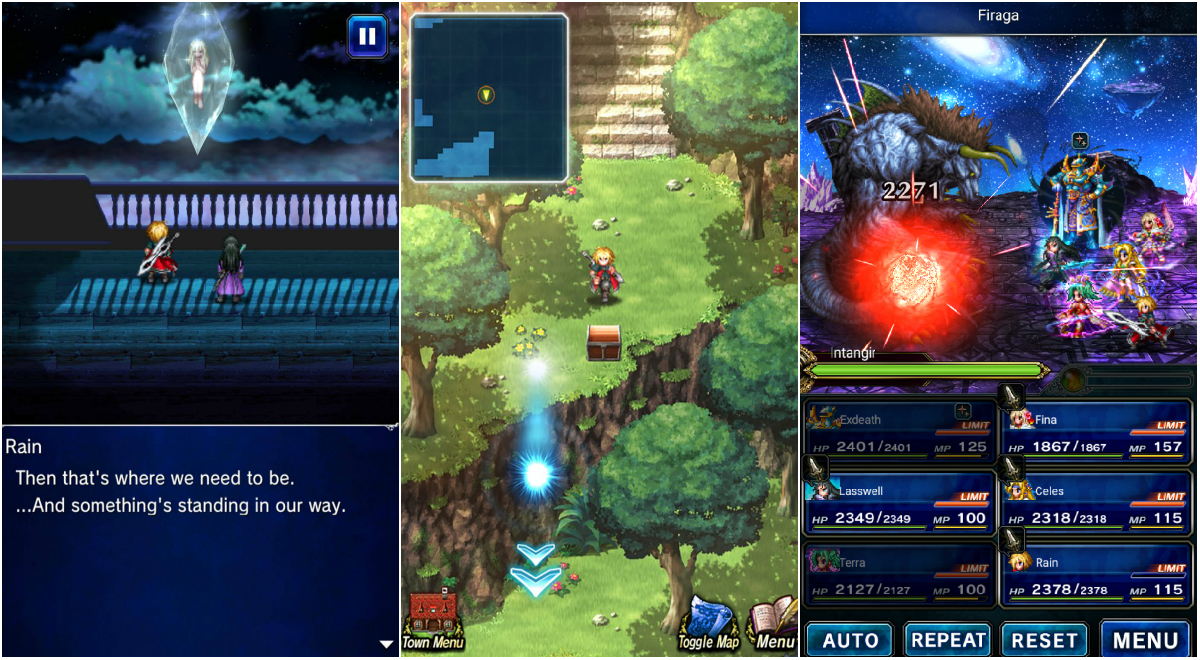 The other major difference is the forming of a party this sees you use the games gotcha system to draw hero’s from different dimensions, These hero’s are known as visions and it wont take you long to get a dozen or two. Depending on your luck the gotcha system can make the game very simple or very difficult for instance drawing a 5 star hero means there strong and can level up a lot more but drawing a one star will see you with a weakling that can level up to 20 and while you can improve any hero in stars, stats and max level doing so with a weaker party is more taxing.

The actual game play is split into two main parts battle that uses a turn based system with final fantasy elements utilising a simplified interface sees you tap a character stats on the lower part of the screen for normal attacks while swiping in one of 4 directions allows the use of additional commands such as magic, Items, Summons and more. The second part comes in the form of explorations and towns that allow the player to take control via the use of the touch screen to explore as they would in classic RPG style allowing them to talk to townspeople to gather quests and find secret passages that hide valuable treasures even incorporating random battles and boss fights. While the battle system is easy to use and wont cause ant problems at least in execution (difficultly is up to the player) i have to admit despite my actual love for the exploration the input truly leaves much to be desired i had to resort to tapping at some points to get my character to go in the right direction something that honestly worked much better than sliding my fingertip across the screen the main issue with this is most secrets can only be found by hugging the walls and trying to slide through gaps a much more difficult and time consuming task if your tapping blindly hoping to find a secret passage. 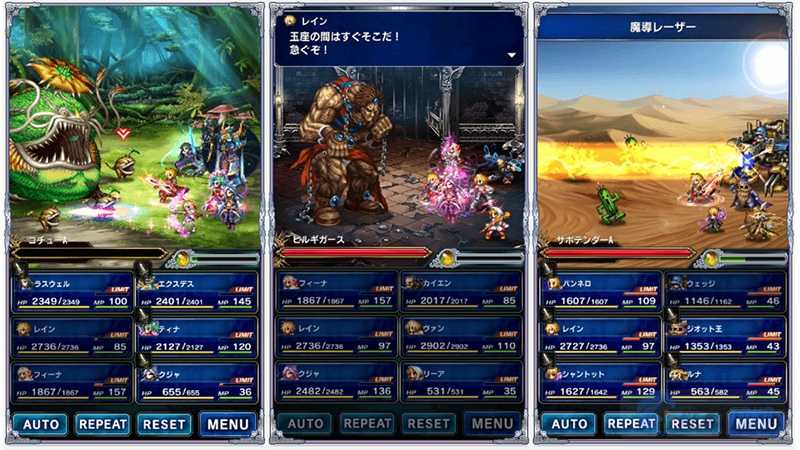 As well as the game-play already outlined there are many extras available to you besides quests some more notable ones include the gathering of blueprints and materials in order to craft equipment, magic and items as well as some materials been used for increasing the stars of your party members allowing them to reach higher levels. There is also a arena that pits your party against groups of enemy’s to earn rewards some of these can be quite valuable and only obtained this way. All the little extras as well as the main plot itself make this for all intensive purposes a true RPG and keeps you coming back for more.

Final fantasy: Brave exivus relies on a pixel art style and the work of Yoshitaka Amano (who illustrated early Final Fantasy titles) throughout game play with beautiful cut-scenes boasting remarkable visuals, As I had stated previously this really gives a sense of a classic RPG and works really well within the game. Noriyasu Agematsu composed the game’s musical score to whom i must tip my hat, The BGM of the title sits well with the whole feel of nostalgia as well as managing to be interesting enough that i un-muted my phone when i played. 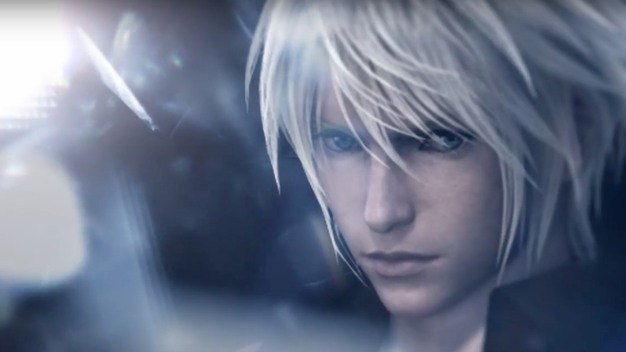 As with most mobile games Brave exivus offers micro transactions in the form of lapis these gems can be used for just about anything from adding additional party members to buying energy however the game is very generous with the shiny little gems dishing them out for level ups, finishing quests, daily log ins and more this is honestly quite fortunate as 1200 is 8GBP and that will only buy two party members but 12 continues. Fortunately you can however easily play for free as between what they give away and the use of a free draw i am yet to dip into my stock pile of give away’s (minus the initial start up items) and manage just fine (and i have had the worst luck on gotcha pulls).

Overall i have to give credit were its due and say i wish to see more games like this or even a return to titles like this on hand-held’s, Its fun, its charming and its nostalgic of a era a lot of fans miss and while its sadly got a few flaws mainly in its exploration its pulling me back for more time and time again. The additional fact there is very little push to get players buying only increases to the fact its done well there just no urgency to pay to win no major spikes in difficulty and even supplies you with the means to strengthen your team above what you may need.

Final fantasy brave exivus is out now with a 4.6/5 score on google play its free to download and play but offers micro-transactions.

Check out the awesome trailer !