Revolution Reburning is an officially licensed BlazBlue game made by 91Act, so if you’re a huge fan, you may want to take this game with a pinch of salt.

Because the game is still being patched, I’ll just give my first impressions then come back to it later when it’s a little more complete.

Firstly, the game plays really fluid, it has a beat em up style, but the controls are heavily simplified. You have the arrows in the corner for forwards and backwards, if you double tap these you’ll dash in that direction. You tap the screen to do a standing attack, swipe forward for a strong attack and swipe upwards for an air attack. With this, you can easily combo, which isn’t something that is easily managed on a touch screen. It feels comfortable and it works really well. 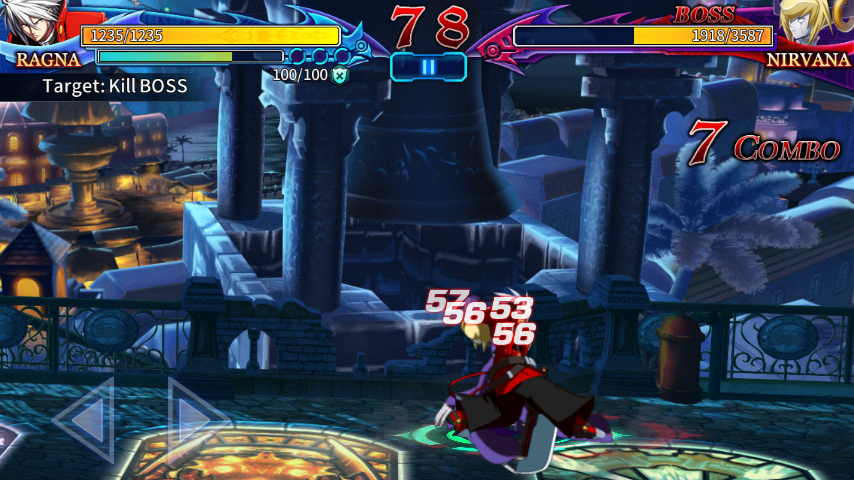 The soundtrack and art are taken from the main games, so it looks and sounds just as pretty as it’s console counter parts.

Now, I do have a few minor gripes which I have to get off my chest, however I have to stress they don’t take away from the gameplay, it’s still a fun game. When you first start, the menus can be a little confusing, everything is on one screen instead of sectioned off, so it can be hard to find what you want at times and if you spend some time away, you’ll have an even harder time finding what you wanted, which can be a minor put off at times.

The second gripe is more of a tiny fanboy rant. In story mode, the characters don’t seem themselves, this can put some hardcore fanboys off but if you can separate this from the main series then it isn’t really a problem. A quick example of this is when you first meet Nirvana, she isn’t with Carl and seems to talk more like Nu, when Nirvana doesn’t talk at all. 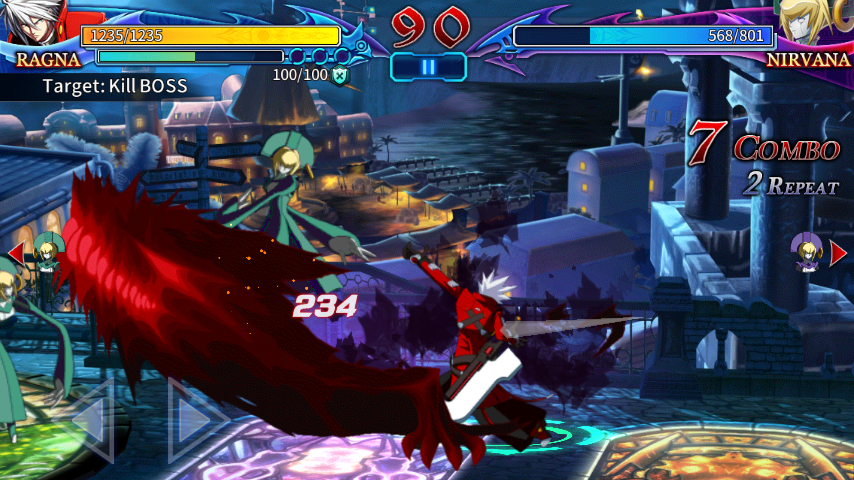 The final gripe isn’t with the game itself, but a problem I feel is persistent in F2P mobile games and a few console games, microtransations. In this game the programmed form of crack is the diamonds. Now I understand that the developers here need to make money, but a lot of the time when companies do this it just seems plain out greedy. You can get a small amount of diamonds for free, however to unlock other characters, they start at 999 diamonds for Noel and Tager, then the others cost even more. Now, for 6998 diamonds it’s £89.99. Considering the amount of diamonds you’d need for all the characters so far is 12198 that means the cheapest way to get all these would be to buy 2 lots of 6998 diamonds, working out to £179.98, after this you’d have around 1000 diamonds left, but still, paying that much for 7 characters is way too hefty, and this is when they’re on sale. Again, this goes back to how I started this, it’s understandable that these companies need money, but there is a point where it’s just greed and I have to stress that this isn’t a problem with the game itself, but with microtransactions in general.

Now I’ve got those out of the way, let’s talk about the actual game. It features a story and a mission mode, story follows the events of your hero, which to begin with is just Ragna, as he fights the NOL to destroy the cauldrons, Rachel guides him on his way and he fights against vigilantes, the first one you meet being Nirvana. Mission mode seems to knock the difficulty up of story mode missions a little bit and will allow you to unlock bonus equipment if you beat them. As you take up missions, whichever mode you’re in, this uses 5 stamina a time, again you can buy stamina or you can wait for it to refill. As you beat missions you’ll get a star ranking, between 1 and 3 stars, so if you’re a perfectionist then you’ll keep replaying missions to get the 3 stars.

The game has some RPG like elements, such as levelling up and equipment. As you level up you get stronger and as you equip items your stats go up, however you can upgrade and enchant your equipment to make you even stronger.

At the moment, the game is being patched and new features are being added (mostly new heroes) so it’s constantly changing and the game may go through a drastic change. Honestly, I feel like it still needs to find it’s feet, but at the same time I can’t wait to see how it ends up shaping up.

Also, don’t forget this is a new segment, so if anyone has any games that they’d like to suggest then please do, don’t feel shy we’re looking for new stuff to cover!