The Technomancer is brought to us by SPIDERS, the team who made such titles as Mars: War Logs & Bound By Flame. A team hoping to finally break through from the dark confines of budget niche and explode on the scene in flashy glory have put all their money and man power into the Sci Fi action RPG known to us all as The Technomancer. So have SPIDERS finally managed to craft it’s Sci Fi epic and create one of the greats or like those that came before does it come up just a little bit short? Strap in and read on as we are off to Mars again to find out!. 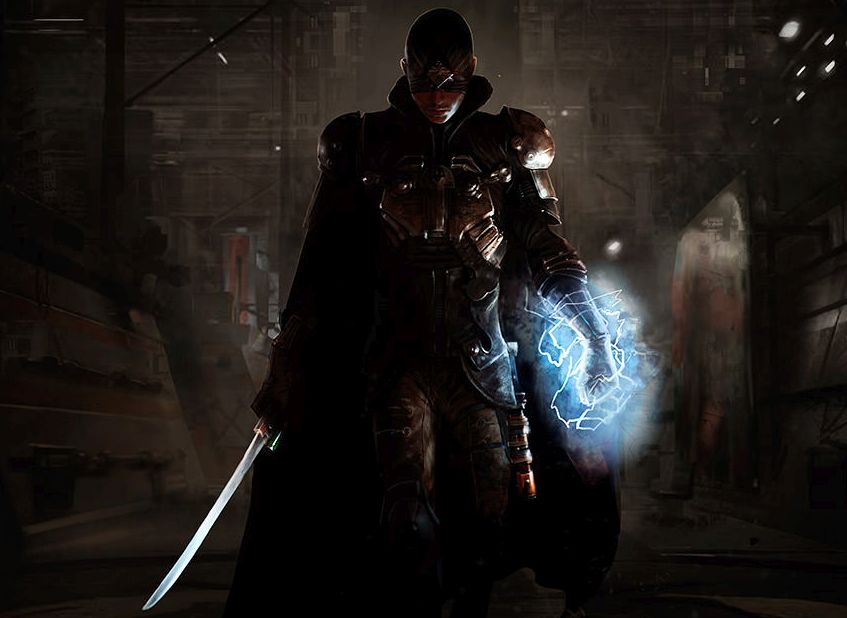 The Technomancer is set on Mars, 200 years after being Colonized, there is war everywhere over the precious resource of water and the factions fighting this war aren’t holding back. You take on the role of Zachariah, originally somewhat of a rogue from the slums he’s worked his way up to the ranks of the force known as the Technomancers, these are “mage warriors” both feared and respected due to their ability to wield electricity and other varying talents (Think Cyber Jedi). During the 20-30 hour main story you’ll meet quite the eccentric and often cliched cast as you travel across the Red Planet in search for the truth of the Technomancers and the War of Water.

As any good RPG knows to go along with your epic sprawling story you need the side cast to keep the engine running and if there is one thing SPIDERS really excel at, it’s creating an interesting cast of characters to keep you company through the story. Often the characters will conflict in choices which muddies your judgement in regards to the many choices given to you during the tale, do you kill this character as per mission objective or go with your partner and set the person free because “He was an alright guy?” the choices come in thick and fast and the cast help set the feeling of inner conflict within the main character.

The story runs along at a nice pace and though it really falls into a lot of the genre cliches it is done with an impressive scope that you can’t help but fall in love with and strive to see every inch of what this game has to offer. 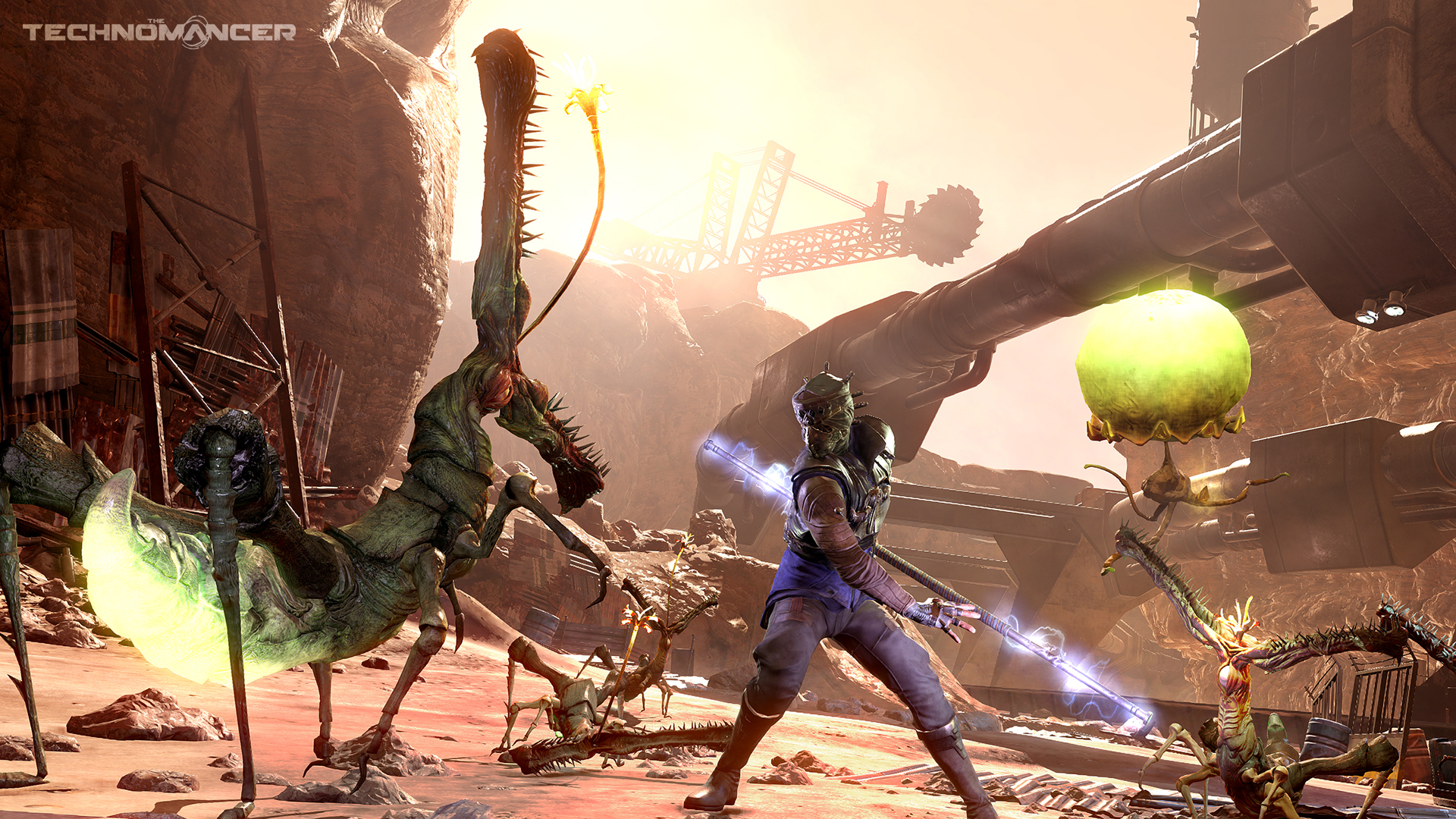 The atmospheric music much like the story really helps the tone but is practically what you’d expect from something set on futuristic war torn Mars, it’s worth noting that some tracks do stand out and you can see the influence Olivier Deriviere has had in regards to the soundtrack. The sound effects range from glorious electrical cracking to rather dull generic “hit” sounds which starts one of the main problems with this title, but we will cover that more as this review goes on. The voice acting again is terribly hit and miss with the main character often sounding lost and disinterested in the events happening where as the side cast range from dead to overly enthusiastic.

Visually The Technomancer has the ability to make your eyes water with luscious Cyber Punk inspired visuals and intense detailing. The scenery is such a bountiful visual treat for fans of Sci Fi and Cyberpunk to such a point I have to ask why aren’t we seeing stuff like this more often? Ranging from the desert lands of the Red Planet, the almost too clean and civil Exchange to the poverty and down trodden tones of the slums, there are many more areas but to avoid spoiling I shan’t go into them.

Now I know what you must be thinking “It’s sounds too good to be true!” and sadly I have to reply with “Well yes, it is”, for every amazing looking area, it seems there are double that in drab, poor looking areas, it seems to me the budget didn’t really stretch to the scale the game required and that plagues every aspect of the game. There are times where the character models look really nice followed up by dog eared looking scenery, sometimes it looks like Shrek on Mars, facial animations hark back to early PS2 couldn’t be further from the recent Uncharted 4 mo-cap wonderland.

Naturally The Technomancer doesn’t have the budget or stretch of titles like U4 has so I do allow it some wiggle room but I’d be lying if I didn’t say that the inconsistencies of the visuals not only baffled me but somewhat held the game back more than I would of liked. As a final blemish on the game there are an awful lot of janky looking animations and such, characters either look too stiff or ragdoll, sometimes they don’t look like they interact with the world and skate just above the floor and when you perform a finishing move mid combat the slo-mo effect looks horrid and really cheapens the overall package. 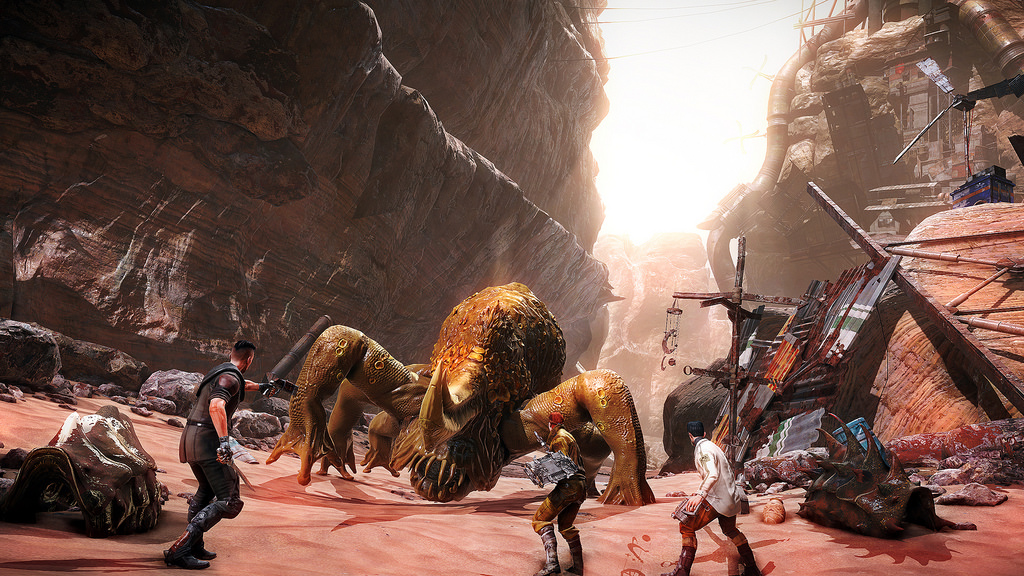 So the game looks and sounds hit and miss but just how does it play? Well i’m more than pleased to say it plays damn well! With previous SPIDER games the core foundation were solid but it was either the combat or the in game systems that let the game down, it seems this time though they have taken all feedback on board and created the finest title they have published to date! Exploration is your bog standard, wander around, pick up items, talk to people for information and progress the story, you have several mechanics such as crafting, skill trees which improve various skills from combat to conversation. The menus are all easy enough to navigate and the game handles very well in these sections.

Now the combat is where this game shines, you have 3 stances, warrior, rogue and guardian. Each of the stances drastically change how you approach combat, warrior you wield a staff so you are able to take on multiple foes, rogue allows quick movements and ranged attacks on top of status affects & finally Guardian is shield and heavy weapons for taking on bigger foes and tanking. Learning which stance is best for each occasion is key to surviving on the Red Planet which even on Medium difficulty can quickly hand it to you if you aren’t prepared.

Alongside these options you have your Technomancy, this allows you to buff weapons, hamper enemies and even shoot bolts from your hands just like The Emperor (2nd Star Wars Reference), this quickly drains your “Fluid” or MP meter for the old school, it’s risk vs reward when you use it and coupled with the many traps and items you can use really help the combat come into it’s own. To help all of this along when you go into a menu for stuff that isn’t “Hotkey’d” the game slows down to help you plan your next attack, it’s little nuances like this which really push the game along for me. 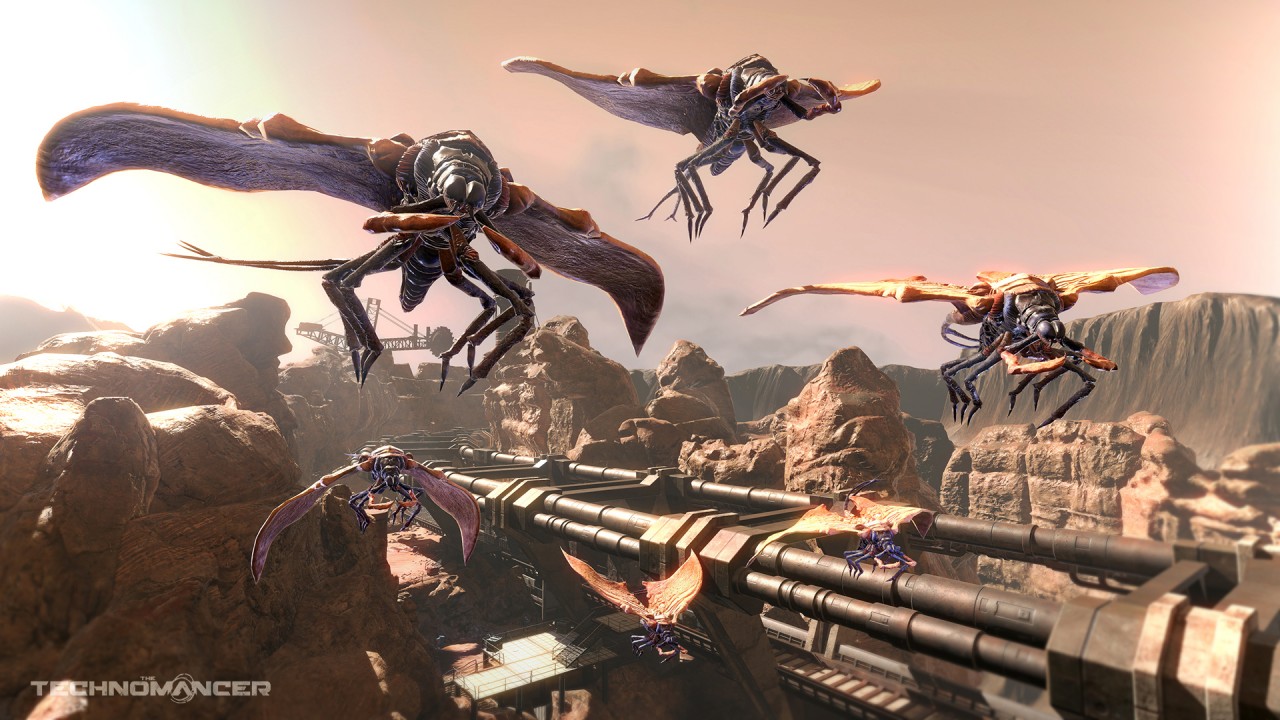 The game runs quite smooth for the most part clocking in at a steady 30fps with little to no slow down bar the oddly intentional Slo-Mo in combat. During my playthrough I came across no glitches that hampered my gameplay just odd animations and had one audio desync. The load times aren’t the quickest clocking in at around 30 seconds to load each section which can be annoying when the difficulty ramps up and you die mid encounter a good few times. I reviewed this game on the Xbox One and honestly I felt the game ran great, I know there is a stigma with Xbox One and performance which I did worry about but for me the game ran buttery smooth and far more stable than previous titles. 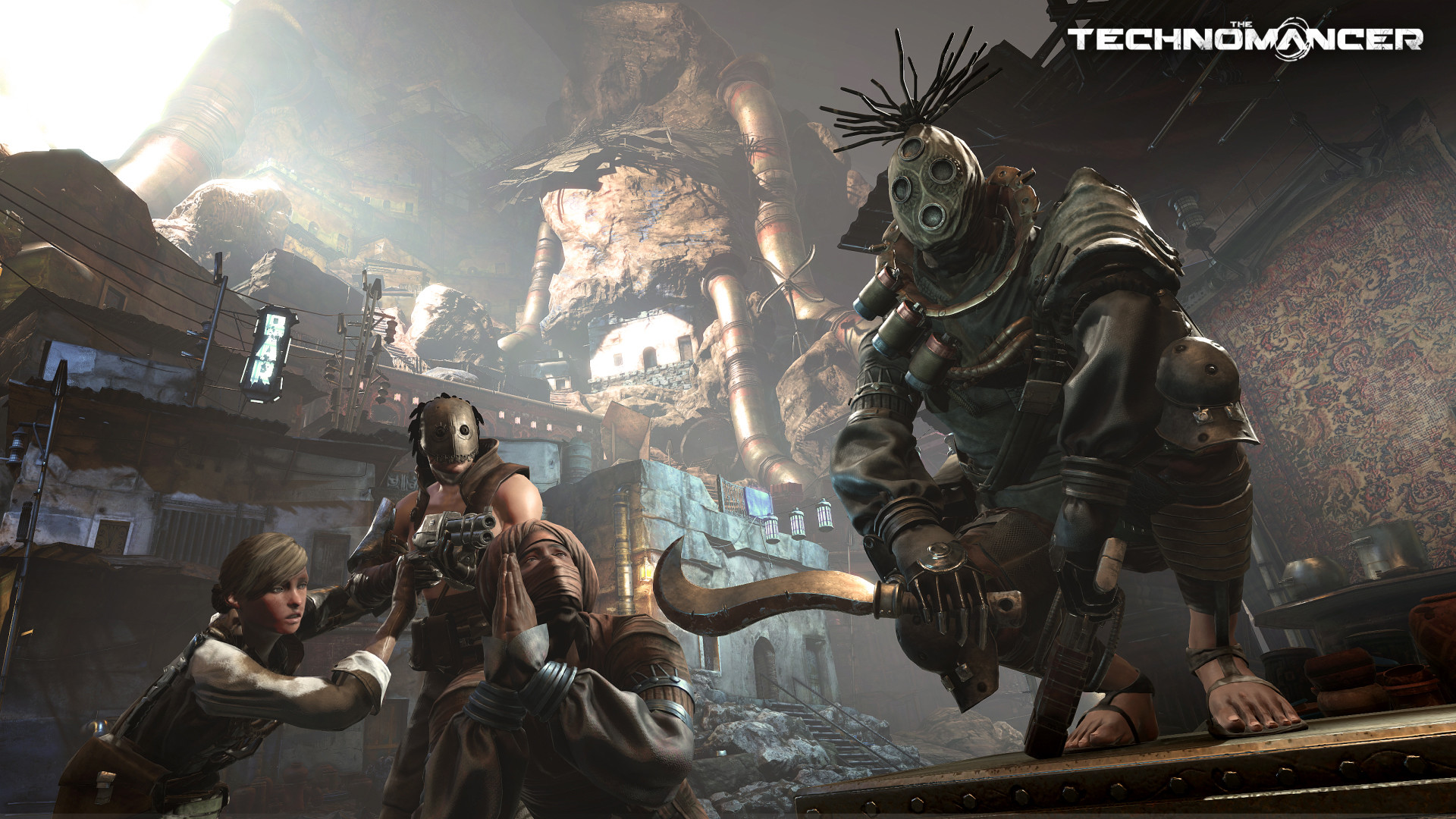 The main story clocks in at around the 25/30 hour mark and there is around another 20 hours of side quests waiting for you to attend to, between the perks of extra experience and materials, the karma system where you can choose to kill your enemies for extra fluid and the engrossing combat i’d say SPIDERS certainly created a winner with this title.

The narrative has several forks which would encourage multiple playthroughs and the setting alone demands your entire attention, the major downfall with the title is the lack of consistent polish throughout. The script though good is riddled with every major Sci Fi and RPG trope you can think of, the voice acting is sub par and the combo of mixed visuals and off animations makes the game feel more early last gen at times than something made with the current gen in mind.

I fell in love with The Technomancer and even though I have enjoyed the studios previous titles I couldn’t suggest them to many people, this on the other hand I could sing it’s praises to most and paint it in more of a positive light, It wouldn’t appeal to someone looking for ground breaking innovation or AAA paint jobs but it’s more than welcome in any RPG/Sci Fi fan’s library.