This article was based off the second build demo released in July 2015 on the Japanese Playstation Store. The article originally ran on our old site on July 20th 2015 and will remain our current preview for the title until either another demo is run or we get access to either the full Japanese build or upcoming western release. @NamelessAndi

JoJo’s Bizarre Adventure, Manga powerhouse with one of the best anime series of recent years, countless games under it’s belt including the legendary Capcom JoJo fighting games and the recently well received All Star Battle. Chances are if you understand when I say ORA! or WRY! this game is already on your radar. 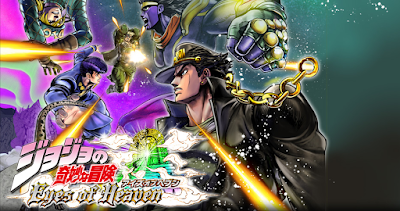 How does this stack up now & is it worthy of the JoJo name?.

If you aren’t aware EoH is a 2 on 2 arena battle game along the lines of J Stars & Anarchy Reigns, described as only the JoJo team could as “Stylish Tag JoJo Action”. You are presented with 2 3D arenas in the demo in which you have free reign to explore, battle, use items such as tables and pots or even activate stage effects ala All Star Battle, naturally like ASB all the stage effects reflect something iconic from the JoJo series and feel that little more special when you see it. 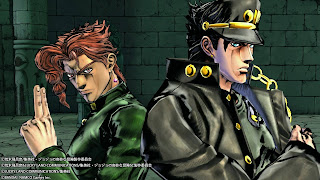 The stages available in the demo are the Joestar mansion from Part 1: Phantom Blood & Cairo Rooftops from Part 3: Stardust Crusaders. Thankfully i’m happy to report that both stages feel very unique with the stage danger of falling off the rooftop in Cairo being just as harrowing as brawling in the fire encased stairwell of the Joestar mansion. To help along the authenticity of these levels you have stuff like Zombies trying to grab you if you venture near the windows in the Mansion or if you activate certain requirements you’ll recreate Kakyoin’s Death in Cairo.

The battle system is very similar to the other Arena Battle games it has a very pick up and play control scheme, light and heavy attacks, dodge, block, Taunt (naturally required for JoJo) & special move modifier. Combo’s are basic affairs for running in, hitting the combo & breaking off before your enemy alerts his partner and they smack you down. Special moves are pulled off by holding L1 & pressing one of the face buttons or L1/R1 for a stronger variation. 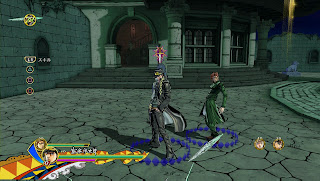 Throughout the match the better you perform you fill up a meter which allows you to activate a combination team attack permitting you fill up the combo meter in the set time. Another ability unlocks once you have done enough damage and combos in which you can hit your devastating ultimate attack, once again ripped directly from the pages of the manga. When a character is downed the other member of that team absorbs their power giving them the boost required to hold ground against 2 on 1 attacks, not too sure how much this effects your character as it never happened on my side during play but a Dio I came across became alot more deadly once this had happened.

The combat system is now silky smooth and the moves and implementation of everything allows for some amazing combos pulled off with ease, the game feels generally faster and smoother to play which makes it much more of a joy to spend time with. The stages themselves now feel a little more populated compared to the original demo and there is more going on which helps add to this making it more an authentic JoJo game rather than an Arena Brawler with the JoJo name.

The demo you have access to the following characters

All these characters act very differently and have pros and cons so there is no major advantage to picking one of the Stand Users over a Ripple user or Part 1 Dio. As an example one of the battles I had I was kept at bay across the map by N’Doul using his stand until my partner got over to him and unleashed a beastly combo. With a huge roster of unique characters this is going to be a great game in which experimentation of teams will be a major factor in how much mileage you get from it.
Over my hour of playtime I can honestly say it flew by and dragged this game alot higher on my most wanted list, the first demo really didn’t sell it to me but the tweaks in this one really brought more out of the title and I’ll be keeping my ear close to the ground for any localisation news. The demo features a 2 match standard Free Battle mode and online Network Mode, the connection was mostly stable but as the majority of players will be situated in Japan I wasn’t expecting miracles.
The following two tabs change content below.