The doors of the Las Vegas Convention Centre are to be blown off the hinges by this years Evo, for those of you who may not know about Evo it’s pretty much the grandest stage of them all for Fighting games!. This year is looking to be another stellar year for the show & it seems one company is certainly pushing themselves into it with Nintendo entering 3 titles this year!. 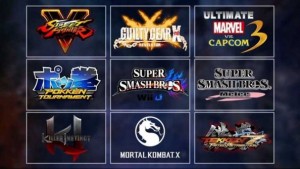 It’s interesting to note that Melee & Smash U are in there as they are vastly different games but Ultra Street Fighter IV is taking a hike year, replaced by Street Fighter V. Blazblue, King of Fighters and Injustice also seem to be taking breaks to be replaced by new comers Mortal Kombat X, Guilty Gear Xrd: Revelator & Pokken Tournament. From what it looks like it seems Evo is to be the kicking point for Tekken 7 & Street Fighter V in ushering the new generation & saying farewell to the much played and loved Street Fighter IV & Tekken 6, we can only hope we get many more moments from the new titles and maybe even another famous Evo Moment?.

Check back with us for results and thoughts about Evo 2016 closer to the time.