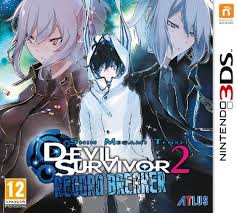 Devil Survivor 2 Record Breaker which I will now just call DeSu 2 is set in modern day Japan, Smart phones are all the rage and there is a new website which apparently shows the moment people die called Nicaea. Your silent protagonist decides in typical JRPG fashion to check this site out under peer pressure of his best friend, on the way home disaster strikes and the MC sees himself, his best friend Daichi and recently met Io Netta on the latest Nicaea video, fate steps in and a mysterious Devil Summoning App is installed on MC’s phone which gives him the tools to survive the assault by the freshly summoned devils.

The story from there goes on-wards and upwards including some brilliantly written characters, the mysterious Jps organization and just what exactly is going on with Nicaea. The story is mostly done in Visual Novel style as there is no exploration outside of the world map menus, characters will reveal more about themselves the more time you spend with them but as time is limited you need to choose wisely, each character choice can change the path you take and ultimately the ending you’ll get. The story does unfortunately take some bumps from about midway and sadly doesn’t stand up in my opinion to the story of the original Devil Survivor, there is an additional story set after the main game which does improve it somewhat but due to story restrictions it’s alot more VN than i’d like and didn’t hold me as much as the main narrative did. 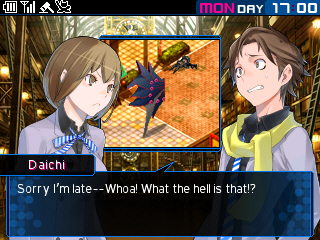 Visually the game the game still looks the same as it did on DS, there are a few 3D models littered on the maps including the characters and Devils but lack much attention to detail. The game is displayed from an isometric view like most SRPG titles, this helps display more of the maps which help immerse you in this disaster as Japan crumbles around you. The character models are drawn well and have a good range of expressions, the female designs are quite questionable with their almost painful looking breast placement and general disregard for gravity but Waifu I guess?.

On the audio side of things ATLUS have gone back and near enough provided every character with tonnes more voice acting which as you’d expect from ATLUS is really well done, on the music side of things everything sounds alot better through the 3DS speaker as compared to the DS but ideally it’s an ear phone job, DeSu2 has some really enjoyable tracks but this shouldn’t come as a surprise to anyone who plays SMT as they always have really enjoyable and vivid soundtracks.

The gameplay of DeSu 2 is akin to SRPG-Lite, it has a grid based system, powers that effect movement & has the visual style of the genre but it actually has more in common with mainline SMT games. Character placement doesn’t affect the characters or devils thus not giving an advantage or disadvantage, you can attack from further away if your character or devils have magic skills but alot of your combat will done next to the devil in question. Battling is done in the standard first person view which no character animations, not visually the best and the sprites miss the clarity of the sprites from SMT IV.  You have your various attacks from physical to debuffs to magic attacks, if you hit a critical attack or an enemies weakness you’ll grant yourself an additional turn at the end of the battle to either inflict more damage or tend to your wounds. Outside of battle you can use abilities to either heal, buff, debuff or change enemy movement range, it’s always good to keep these in mind as they can easily change the tide of battle to your favor.

Outside of battle you have the option to fuse Devils to create even stronger harbingers of destruction, Devil auction which is basically eBay for Devils and is unique to this series, the game will tell you the bidding history of other people involved in the bidding (usually named after other SMT characters) and you have the option of going head to head to get the Devil at a decent price or Buy It Now at a highly marked up price, once you have won the Demon then can ask for additional funding or infact inform you it outright lied about it’s stats and can swing from being poor to brilliant.

The game time is limited in that when you visit an area or talk to one of your party it knocks 15 minutes off your time, this means you can only go certain routes throughout each playthrough which screams multiple playthroughs, you can also free battle if you feel your levels are a little low. Another aspect unique to this series is the Skill Crack system, before battle you choose from a skill list any skills you’d like your cast to learn, you then need to find which Devil had the skill and defeat them with the cast member you chose, this helps you mold your party exactly how you’d like them and cover any weaknesses you feel they have.

In terms of additional content for this port you have the voice acting, an entire new story arc set over 7 days post game which is enjoyable if not a little long winded, a new character, a new more friendly mode if you want to progress through the story easier and tonnes of DLC including free map packs, skill and demon packs, unfortunately there has been no word on the Durarara!! characters that Japan got.

When push comes to shove DeSu 2 is yet another shining example in the 3DS library of must buy RPG titles, it’s last gen visuals and VN style story may seem off putting to people looking for more of SMT IV, Bravely Default or even the SPRG master class of Fire Emblem Awakening but there is tonnes of depth, gripping and dark story and tonnes of extra content to really stretch that playtime even for seasoned vets. I’d highly recommend any RPG fan picks this title up as this and Devil Survivor Overclocked! both rank very highly for myself, though the story isn’t quite as strong as the original in my opinion the extras easily justify it’s purchase and the hours it’ll steal from your life.