Review Supplied by Zoink Games
Loki is up to his usual mischief and has stolen Odin’s eye! The only logical way of getting it back is to send your best warriors after him. However, no one ever said they had to be alive. Welcome to Zombie Vikings – the four player hack and slash adventure game that sees you playing as one of four Zombie Vikings whilst travel through many different worlds set in the Viking era. This is Zoinks Game’s second PS4 title and just like the first (Stick it to the Man), this one is just as wacky. 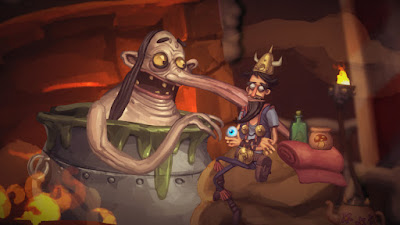 At the beginning of each level you have the choice of four characters; Caw-Kaa, Gunborg, Seaguard & Hedgy. They all have different combat styles and all have their own personal power at your disposal. For my playthrough I chose Seaguard as he is an all round character that has a nice multiattack power. However though there are levels that require a certain character to be in play and if you are playing solo, you are forced to play as that character.
To traverse the world of Zombie Vikings you are given a stone map in which you use to set your next destination. You hope in your epic boat, choose who you wish to play as and off you go on an adventure. 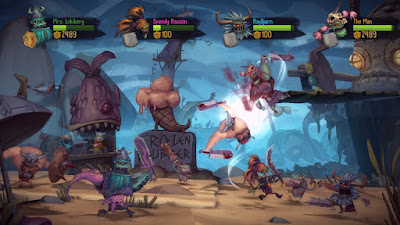 Zombie Vikings sees you fighting in various themed worlds that are split up into smaller levels. The basics of the game is to make it from the beginning to end without dying. However if you die, you will just re spawn at one of the generously placed checkpoints – you are undead anyway.

The gameplay is very simple. You can jump, attack and perform a signature move. The rest is down to how well you can use these together and working out the best tactics for each enemy type. Most of the enemy encounters are just hoard of different types which increase in difficulty as progress through the levels. Some enemies seem really hard at first but once you work out the best tactic and weapon to use, they become as easy as previous ones. There are plenty of mini bosses in each world (each indicated by the large health bar across the bottom), with a final boss on the last level of each world. Like many games of this type though, the smallest of enemies give you the hardest of time. The controls are smooth and somewhat responsive. I found that the attack & movement commands responded as expected but when I was blocking & rolling I felt that it was slightly delayed, thus causing a few problems during some early boss fights. 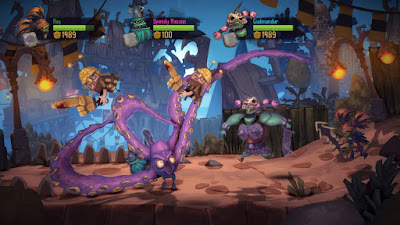 To assist you on your adventures you have the ability to purchase new weapons and ruins. Zoink have been very creative in this department as some of the designs for the weapons are just amazing. Each weapon will have a different effect upon using it. These range from health regeneration to increase damage. My personal favourite from the early levels is the cat on a stick as it can swipe at enemies whilst you hit them with it – pure genius. Ruins are basically buffs for your character that will increase stats or offer various protection. Weapons can also be obtained from completing side quests that are scattered around the worlds. These are all easy and quick to complete so they do not feel like a huge burden on the player. The majority of the quests involve going to an area, defeating all the enemies and bringing an item back to the quest given. Upon completion you will receive a weapon that is usually themed around what the quest was about. However though, if you have equipped a truly amazing weapon prior to completing the quest, it will be re equipped with the reward weapon. It is just a minor thing as you can only change your weapon (and ruins) at the beginning of a level or at one of the shops in the world. 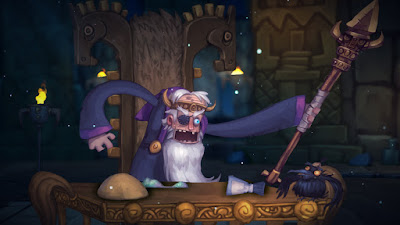 The whole game can be played solo but it is a lot more fun with others. I would recommend either getting a group of friends together or find a good group online. This is a perfect title for anyone who hosts multiplayer gaming nights. 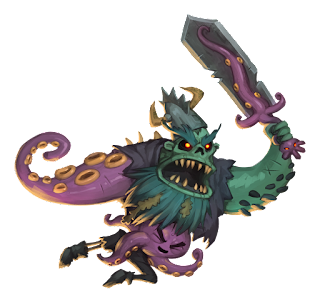 Zombie Vikings is a great co-op brawler. It can be played solo with no issues but is a lot more fun when played with others. With great characters throughout, a quirky art design and an excellent script, this is one that you will not want to miss. It is a simple concept that has been perfectly delivered. For a console that does not have to many couch co-op games I can see this being a firm favourite at any hosted game name.

Who Should Play This

Who Should Not Play This